At the Vuzpromexpo-2020 exhibition in Moscow, a unique Russian serial small-sized city electric car KAMA-1, developed on the basis of digital twins, was presented. It is a development of the Engineering Center of Peter the Great St. Petersburg Polytechnic University together with KAMAZ PTC. “We have presented, in my opinion, a concrete result of the work; it right away determined the face of this year’s exhibition,” said Minister of Science and Higher Education Valery FALKOV. 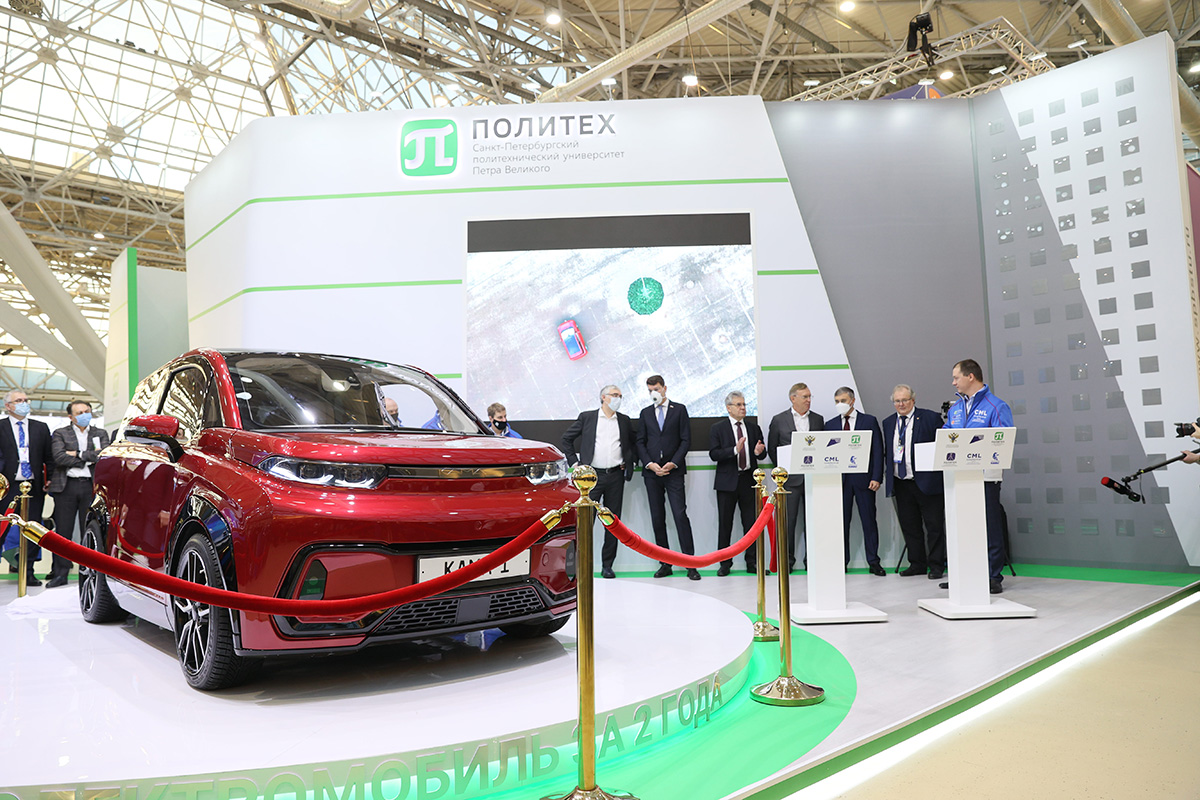 Vuzpromexpo demonstrates the results of implementation of state and federal target programs in the field of science and industry. The organizer is the Ministry of Science and Higher Education of the Russian Federation. This year the event is held in a mixed format. The participants comprise universities, scientific institutes, and leading companies of the national economy. The exhibition takes place for the seventh time and has already become a launching pad for hundreds of unique scientific developments. Before the grand opening of Vuzpromexpo 2020, a premiere demonstration of the first sample of the electric smart crossover KAMA-1, created by the SPbPU Advanced Manufacturing Technologies Center of NTI on the basis of the digital twin technology, took place at the Polytechnic University’s mount.

“This is the first Russian electric car developed entirely on the basis of digital twin technology and specialized digital platforms,” explained Alexey BOROVKOV. “The smart crossover is competitive both in terms of technical and consumer characteristics, as well as in terms of design, safety and comfort, and meets international certification requirements.”

The “Creation of a smart digital twin and an experimental prototype of a small-sized city electric car with a Level 3-4 ADAS system” project is implemented at the SPbPU Computational Engineering Center (CompMechLab®) - the key structural subdivision of the SPbPU Advanced Manufacturing Technologies Center of NTI with the financial support of the Russian Ministry of Science and Higher Education. The industrial partner of the project is KAMAZ PTC.

The specialists of the SPbPU Advanced Manufacturing Technologies Center of NTI of New Production Technologies under the leadership of Alexey BOROVKOV in just two years, the shortest possible time by automotive industry standards, have developed and produced the first Russian electric car. This is the first full-featured prototype as part of the electric vehicle design platform for the development of vehicles varying from a compact city car to urban 18-meter electric buses that meets international certification requirements. 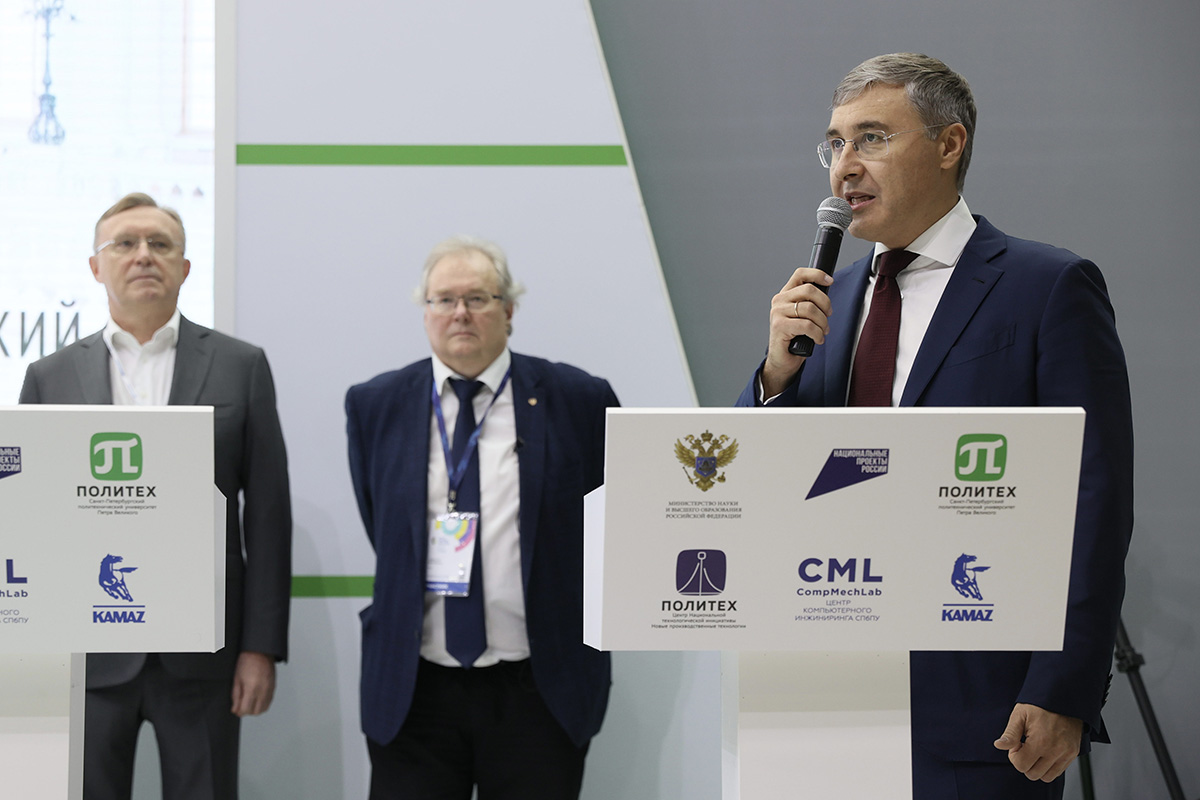 “This is an example where, through the focused efforts of all interested parties, an extremely interesting product can come out,” Minister of Science and Higher Education Valery FALKOV.

“Today is a non-trivial event: we are presenting the development of one of the best Russian universities, St. Petersburg Polytechnic University. First of all, I would like to thank the rector and the team of Alexei Borovkov for this development. But it would be impossible to achieve this result without interaction with the industry, and a special role in the implementation of this project belongs to KAMAZ PTC. The purpose of this exhibition is to demonstrate successful interaction of Russian universities, scientific institutions, business and enterprises of the real sector of economy. Those technologies and ideas, which are born in universities, student and youth startups, must be embodied in production and become world-class products. What is presented today is unique for many reasons. For 20-30 years there has been a big discussion about whether or not to believe in Russian education and science and in the Russian car industry. It seems to me that for people standing here, the answer is quite obvious: of course, we must believe, given the glorious traditions and teams and their desire to move forward! The task, solved by St. Petersburg Polytechnic together with KAMAZ, shows that even in this part the ambitions can be successful. There will certainly be a result, but it is necessary to help, support and trust, because the result is possible through the efforts of large teams.

This is a car that was created in record time, using the latest digital twin technology. The technology itself, its carrier and holder is also Polytechnic University, and the ideological inspirer, the man who put the most effort into it, is Alexei Borovkov. He is strongly and successfully involved in this, we know that. We are used to that it takes from 5 to 15 to 20 years to develop an idea. The electric car we are presenting is an example of when, due to the purposeful efforts of the parties involved, a very interesting product can be fabricated. I would like to emphasize the role of young scientists and engineers in the development of this project. The government has set the goal of making science younger, and there should be synergy between young people and established scientists. It is important to ensure an influx of young people into Russian developments. I think it is very important that the guys who took the plunge in this project today can show the country and the world a very interesting development.” 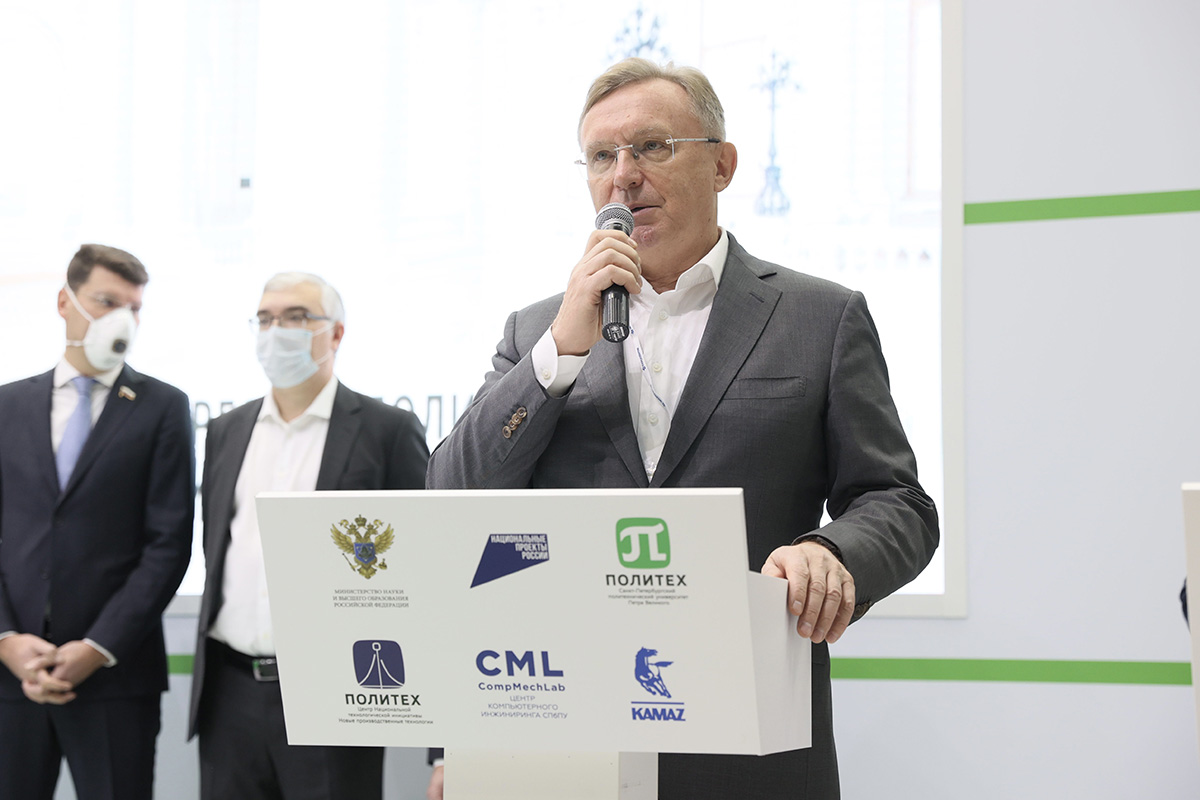 Sergey KOGOGIN, General Director of KAMAZ PTC: “This is not our first joint project with Polytechnic University. We believe that the future of electric transport is not far away but in the near future. After 400 electric buses made by KAMAZ PTC hit the streets of Moscow, after forming a general concept and seeing what is happening in the world, together with Polytechnic University and with the help of the Ministry of Education and Science, which supports us, we decided that it is time to consider developing a basic platform for the development of both passenger and commercial transport. The most important thing for us is the ability of a group of young engineers at SPbPU and our engineers to make a finished product in a short period of time. The near future will show how successful it is.” 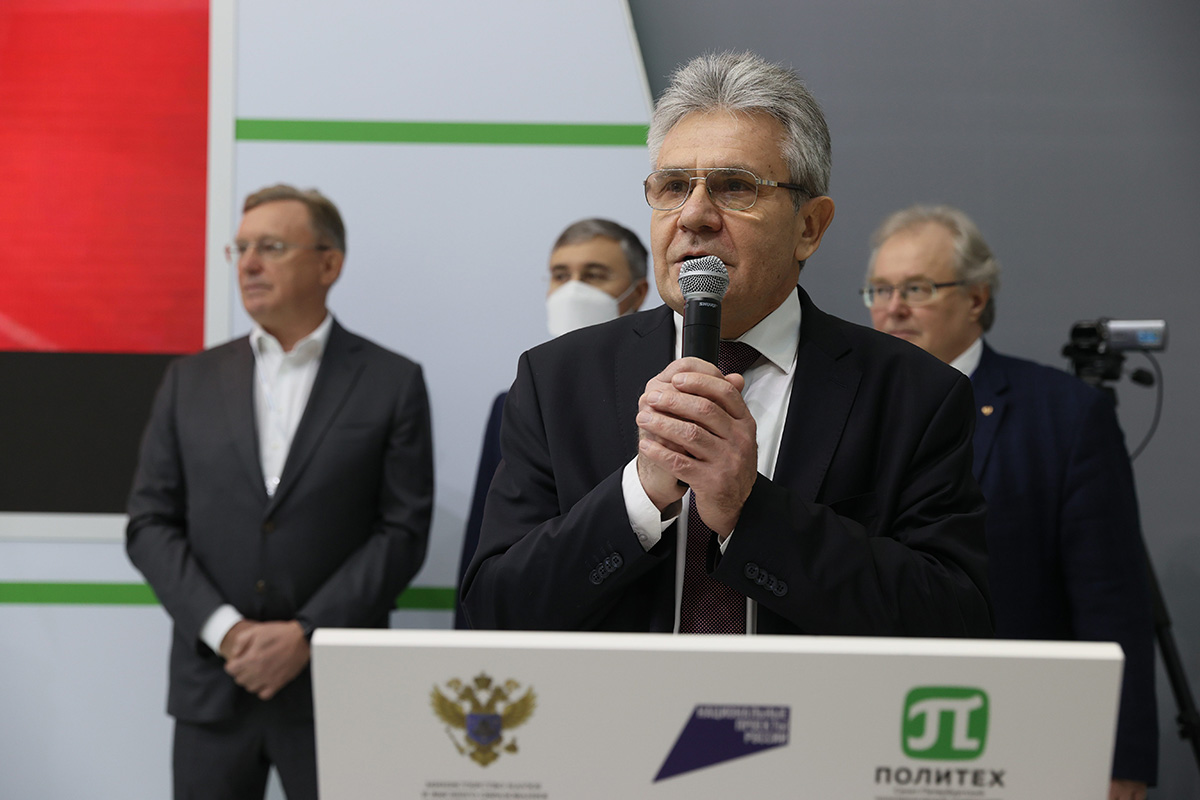 “This is a fusion of youth and experience, university and academic science, a fusion with modern industry,” RAS President Alexander SERGEEV:

“Today is a really interesting event: not only the opening of the forum, but also the presentation of a unique exhibit. It is symbolic that it was made in St. Petersburg. It was in St. Petersburg that the Russian Academy of Sciences was founded; the city was the cradle of science and continues to be so now, showing powerful examples of innovation. All the breakthrough technologies are developing quite quickly, and young people are looking at where to put their efforts in to break into world technological progress. It is great that KAMAZ is present here. They are the leader of high-tech in our country today; they are at the cutting edge of Russia’s advancement towards high technology. I think it is also important that the machine was originally developed in digital form: this is the future of the entire industry. And now that we have entered the digital age, everything should start in silicon (the term for computer modeling, simulation of an experiment - Editor's note). This electric car is an example of how things should be done in the future. It is a fusion of youth and experience, a fusion of university and academic science, a fusion with modern industry. It is a perfect example for the opening of today’s exhibition.” 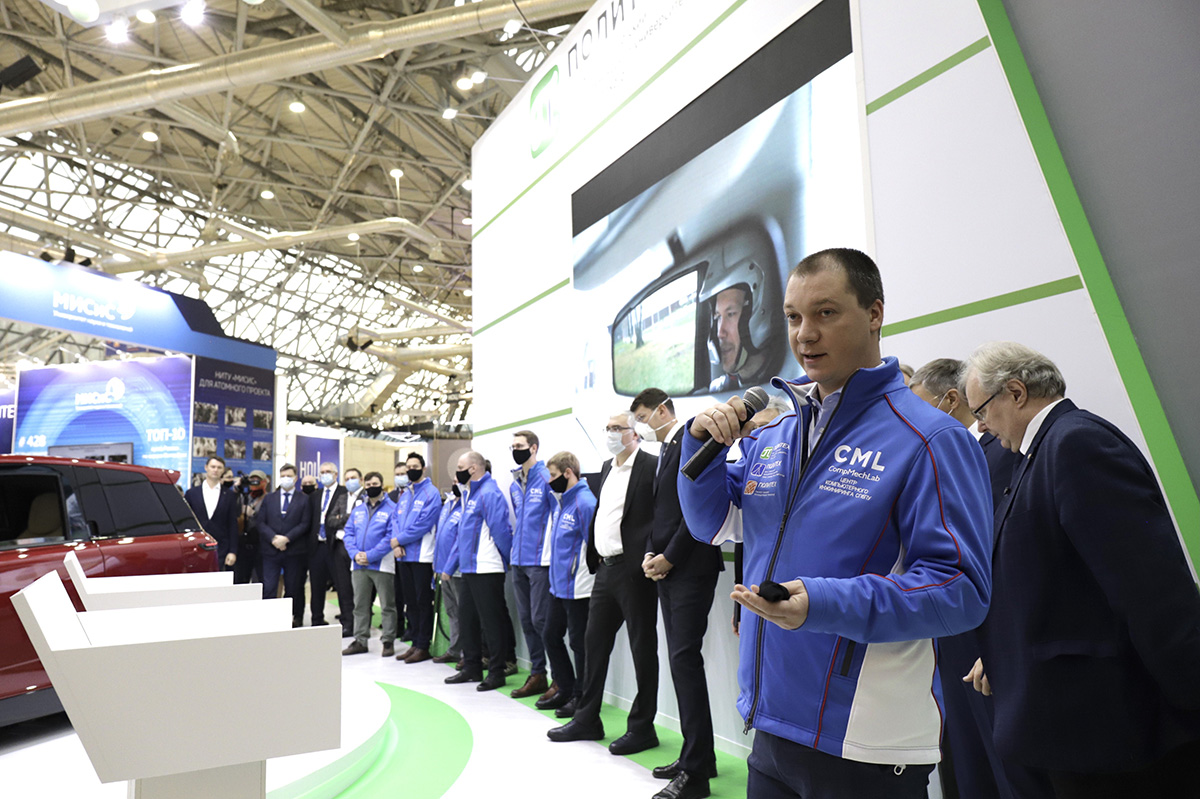 “It is not a replica of ready-made solutions: it is a fully domestic development,” said Oleg KLYAVIN, chief designer of the project and deputy head of the SPbPU Advanced Manufacturing Technologies Center of NTI:

“This is a great result of the work with our industrial partner and the ministry. This vehicle is the prototype, all the design documentation has been created for it. It does not borrow ready-made solutions; it is a fully domestic development in all systems. We developed it as the basis for urban transport. Most people live in big cities, and we would like to have clean cities, clean air, and environmentally friendly transportation.”