The strategic goal of SPbPU taking part in 5-100-2020 Program is to modernize and develop the Polytechnic University as a competitive global research and education centre integrating multidisciplinary scientific research and world-class technologies and being one of the leading universities in the world. It is supposed that by 2020 the Polytechnic University will have been included in the TOP-100 of QS World University Rankings.

Quacquarelli Symonds is a global leading company in the sphere of higher education analysis, which produces rankings based on six criteria: reputation in the educational community, citations of the publications by the faculty, the ratio of students to faculty, the attitude of employers to the university graduates, as well as the relative percentage of foreign faculty and students.

THE 2015-2016 (Times Higher Education) ranking of the universities in the world was published on 1st October, in whichPeter the Great St.Petersburg Polytechnic University occupied position 201-250.

The Polytechnic University was listed in this ranking for the first time, and among 18 Russian higher education institutions it occupied the second position yielding only to Lomonosov Moscow State University. 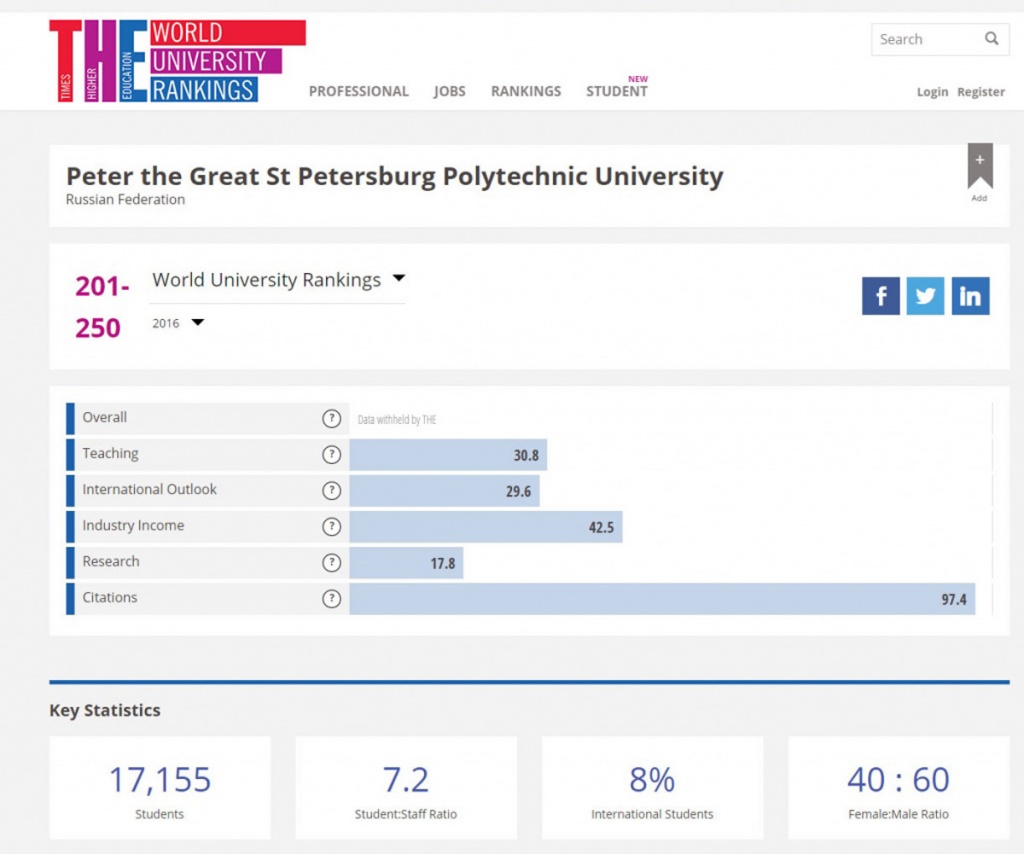 Since 2010 THE World University Rankings have been published by the Times Higher Education journal (London, Great Britain) every year, specializing in the issues concerning higher education. The key indicators of the rankings are: the learning environment, research, citations, international outlook, industry income (based on projects carried out in partnership with industrial enterprises).

The difference in identifying the position of the Polytechnic University in THE rankings (position 201-250) and the recently published QS rankings (471-480) lies in the fact that more than 50% of the QS performance indicators are defined by the reputation in the educational community and employers’ attitude, whereas in the Times Higher Education rankings the indicators described above are more important from the scientific point of view. The indicators of Peter theGreat St.Petersburg Polytechnic University are especially high in the sphere of life-science (interdisciplinary research at the junction of physics, biotechnologies, medicine, pharmacology, etc.), nanotechnologies, materials science, physics and astronomy.

The best educational establishments are identified on the basis of six indicators in the yearly rankings that the Quacquarelli Symonds company, Great Britain, has already published 12 times. The indicators are as follows: academic reputation, student-to-faculty-ratio, employer reputation, citations per faculty, international faculty ratio and international student ratio.

In 2015 Peter theGreat St.Petersburg Polytechnic University University significantly strengthened its positions in the subject area rankings by Quacquarelli Symonds, namely in the field of “Physics and astronomy”, the position now being 201-250 (301-400 earlier).

In July 2015 Peter theGreat St.Petersburg Polytechnic University improved its positions in Russian, as well as global lists by Webometrics Ranking of World’s Universities.

According to the newly published world university rankings, the Polytechnic University is rated the 5th among Russian universities concerning the Internet presence indicator, and in the overall ranking its position is number 991 among more than 22,000 universities assessed by the Webometrics experts. 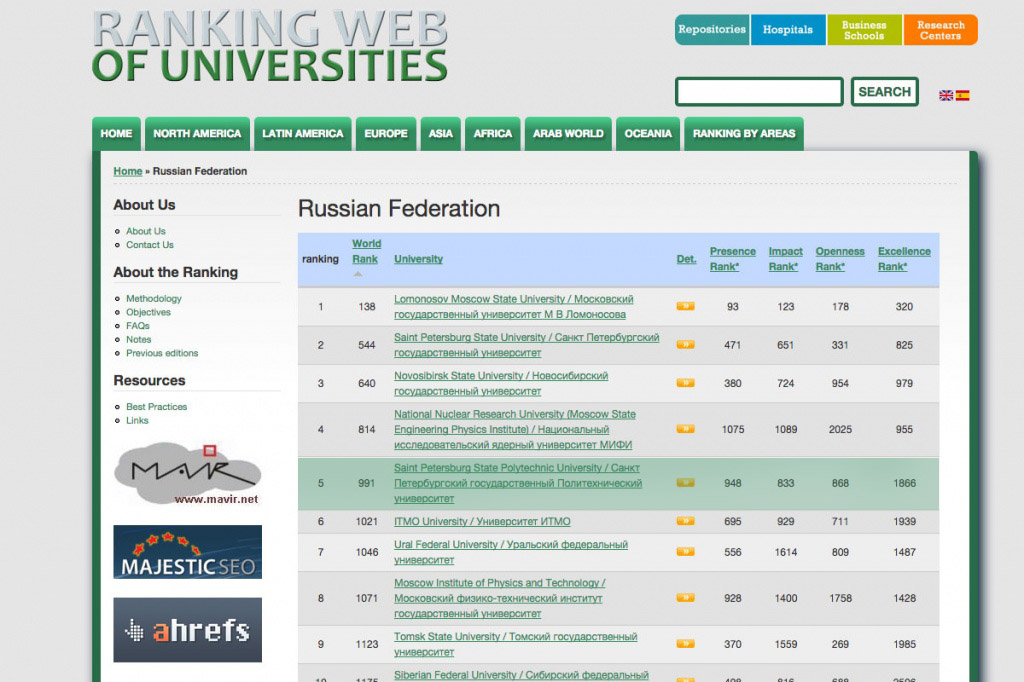 Since the previous version of the ranking table was published (in February 2015), the ranking position of SPbPU among the world educational centers has changed to 991, formerly being 1104. Thus, a 113-point improvement is evident. The Russian ranking list shows an especially significant change: just in a span of six months SPbPU moved to the 5th position from the 14th.

The RAEX agency (Expert RA Russian rating agency) published the national rankings of Russian universities by reputation within broad fields. In comparison with the previous year, Peter theGreat St.Petersburg Polytechnic University has improved its position among Russian engineering and natural-science higher education institutions, now occupying position 8 (position 9 previously). With respect to the subject area “Industrial Science, Engineering and Technology” SPbPU occupies the 5th position in the top-10, and the 9th position in the category “Information Technology”

When preparing the data for the rankings, the experts took into account the respondents’ opinions on the quality of education, graduates employability, as well as research standards. Members of educational and academic community, employer representatives, students and graduates took part in the surveys. The total number of respondents exceeded 34,000.

As a result of the assessment by the leading foreign experts, Peter theGreat St.Petersburg Polytechnic University was rated the fifth among the internet portals of Russian universities!

The international higher education directory 4 International Colleges & University (4ICU) published the world university web rankings at the end of last week. It is 10 years since 4ICU started reviewing web resources of accredited universities and colleges. The rankings include the data concerning 11,307 higher education organizations from 200 countries ranked by web popularity. This popularity is identified by five indicators, which include the following: website traffic and its “importance”, the number of links and the significance of the referring resources, citation flow, the number of cross references, the web resource depth of visit.

The assessment of the academic performance was carried out according to the number of scientific publications indexed in the Web of Science database, citations and speeches made at conferences. The involvement of foreign academics in projects and the international recognition of research were also taken into account.

SPbPU is one of the three top Russian universities, according to the Academic Ranking of World Universities-European Standard ARES.

Peter theGreat St.Petersburg Polytechnic University is rated AA, the top level, and it was ranked the third among 58 Russian universities, according to the Academic Ranking of World Universities produced by the European Scientific-Industrial Chamber in compliance with the European standards designed for higher education institutions. In the top three Lomonosov Moscow State University was ranked first (AA+), and National Research Nuclear University MEPhI (Moscow Engineering Physics Institute) – second (AA). The total number of 2,678 universities worldwide is listed.

The main indicators of the ranking are the status and significance of the university, its prestige, educational and scientific activities, employment of graduates and employers’ reviews. Special attention was paid to the computerization of education.

Peter theGreat St.Petersburg Polytechnic University has a great potential in terms of transferring new technologies to industry, including small and medium-sized enterprises.

SPbPU occupies the fourth position concerning the number of hits that universities get in social networks.

SPbPU is number four among the most frequently mentioned higher education institutions in social networks. According to the monitoring conducted by the Analytical Department of the Integrum group of companies, the most popular university is the Higher School of Economics, followed by MGIMO University and Lomonosov Moscow State University, which get only several hundred fewer hits. Among the universities outside Moscow - Novosibirsk State University and Ural Federal University hold the leading position.