Peter the Great St. Petersburg Polytechnic University is the Best University in Terms of Arranging Sport Activities for Students

John Galsworthy, author of the famous “Forsyte Saga” and Nobel Prize Winner for literature (1932), was definitely right when he said: “Sport, which still keeps the flag of idealism flying, is perhaps the most saving grace in the world at the moment, with its spirit for rules kept, and regard for the adversary, whether the fight is going for or against.” We are very happy that we are the winners and that the saga about glorious sport achievements of the Polytechnic University is going on. Once again we have become the best among all the universities of St. Petersburg in terms of arranging sport activities for students! 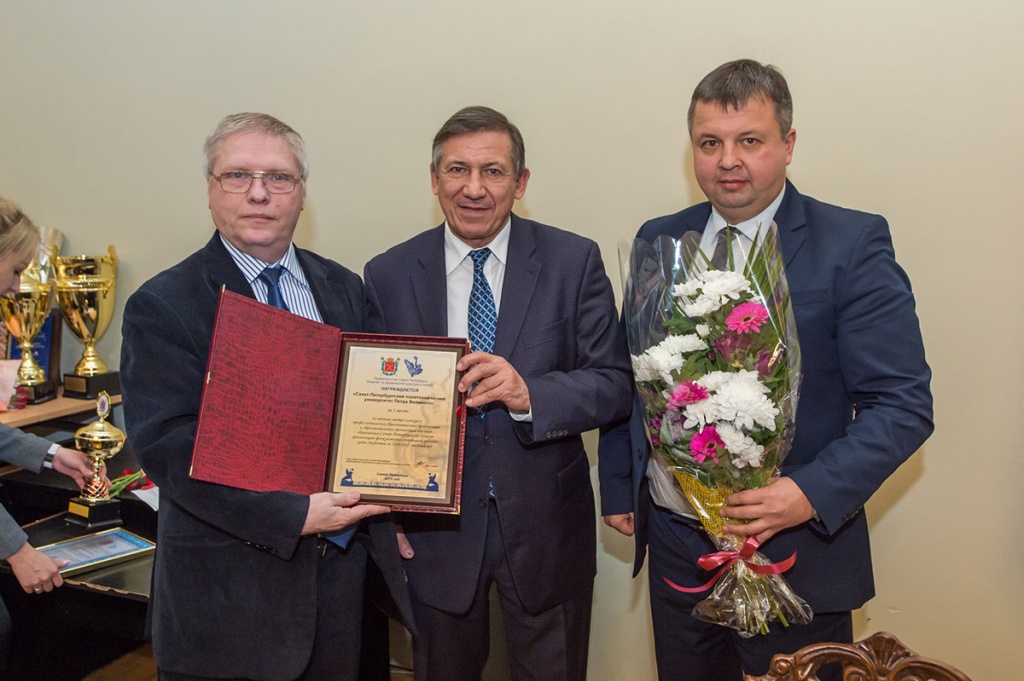 On December 17, 2015 in the Physical Education and Sport Committee of St. Petersburg there was an acknowledgement ceremony for the universities who had won in the Open Public Competition of the Professional Higher Educational Organizations of St. Petersburg for the best arrangement of sport activities for students in the years 2014-2015. Peter the Great St. Petersburg Polytechnic University became the winner of this competition three years running! St. Petersburg State Forest Technical University under name of S.M. Kirov was the runner-up, the National Mineral Resources University took the third place.

The Vice-Rector, spokesman of SPbPU D.I. Kuznetsov and the Director of the Institute of Physical Education, Sports and Tourism (IPEST of SPbPU), professor V.P. Suschenko took part in the acknowledgement ceremony. The Chairman of the Sports and Physical Education Committee Y.V. Avdeev gave a greeting speech with congratulations on behalf of the city’s governor G.S. Poltavchenko. Addressing the winners of the competition, the head of the agency wished them “to work in this branch as long, as possible, keep bringing the fame which they have been bringing by doing their job, to St. Petersburg and the Russian Federation as a whole, for many years. Yury Vasilievich summed up the results of the Committee’s work for the year, pointing that “the representatives of the highest governmental level pay great attention to the sport branch, understanding how important it is socially”.

According to the Committee’s Chairman, they are preparing for the major sport events in St. Petersburg now. The most important are: the Ice Hockey World Championship, which will take place in our city, and the Summer Olympics in Rio de Janeiro. He also spoke about the wide range of actions, which are being implemented in order to improve the city’s sport infrastructure. “We are among the 20 best regions in terms of the number of citizens doing sports. However, even these 6,552 sport facilities which are already there in the city, cannot satisfy fully the demands of all the people willing to do sports,” explained Yury Vasilievich. Moreover, according to Y.V. Avdeev, there are a lot of other aspects to pay more attention to, in particular, work with physically challenged people. “We need to arrange conditions for the disabled so that they could combine education, sport and rehabilitation. When they have such possibilities and when we have enough sport facilities not only for this category of citizens, but for the entire population of our city, this will allow increasing the percentage of people doing sports and strengthening St. Petersburg’s status of a city whose main symbols are culture and sport,” – concluded the Committee’s Chairman.

Going back to the acknowledgement ceremony, the Director of the IPEST of SPbPU V.P. Suschenko commented this high result in the following way: “I want to appreciate the enormous scope of work done by the team of our Institute so that Peter the Great St. Petersburg Polytechnic University could prove its leadership in the city in the sphere of students’physical education and sport activities. It is a great achievement of our teachers and trainers, whose many actions, energy, and constant strive for the best outcomes are the reason for our joint success and victories.”

According to Valery Petrovich, the victory would not be possible without the young energetics of the students’ sport club “Politechnic” and its chairman Rauf Agaev. The Director of the IPEST could not but appreciate the personal contribution of SPbPU sportsmen into this victory, who manage to find time for regular workouts, while being students of such a “serious” university and, furthermore, achieve great results not only at the city, but also at the country and international levels.” Now it is important to express gratitude to the university administration - the Rector and Vice-Rectors, and to the teachers, who provide all the support to our sportsmen and contribute to further development of physical education and sports in SPbPU!

We congratulate the whole university team – employees, teachers and students – on another victory in the competition for the best arranging of physical education and sports activities. Faster, higher, stronger – right so!