The "Recognition and Influence" prize from Fontanka.ru: for the second year in a row, Polytechnic University was recognized the best university in the city!

Ten finalists of the “Fontanka.ru - Recognition and Influence” city prize received their awards last night on the New Stage of the Alexandrinsky Theater. These are the best of the city’s best companies and brands, chosen by the audience of the Fontanka.ru city portal by polling. Peter the Great St. Petersburg Polytechnic University for the second year in a row became “The best university.” 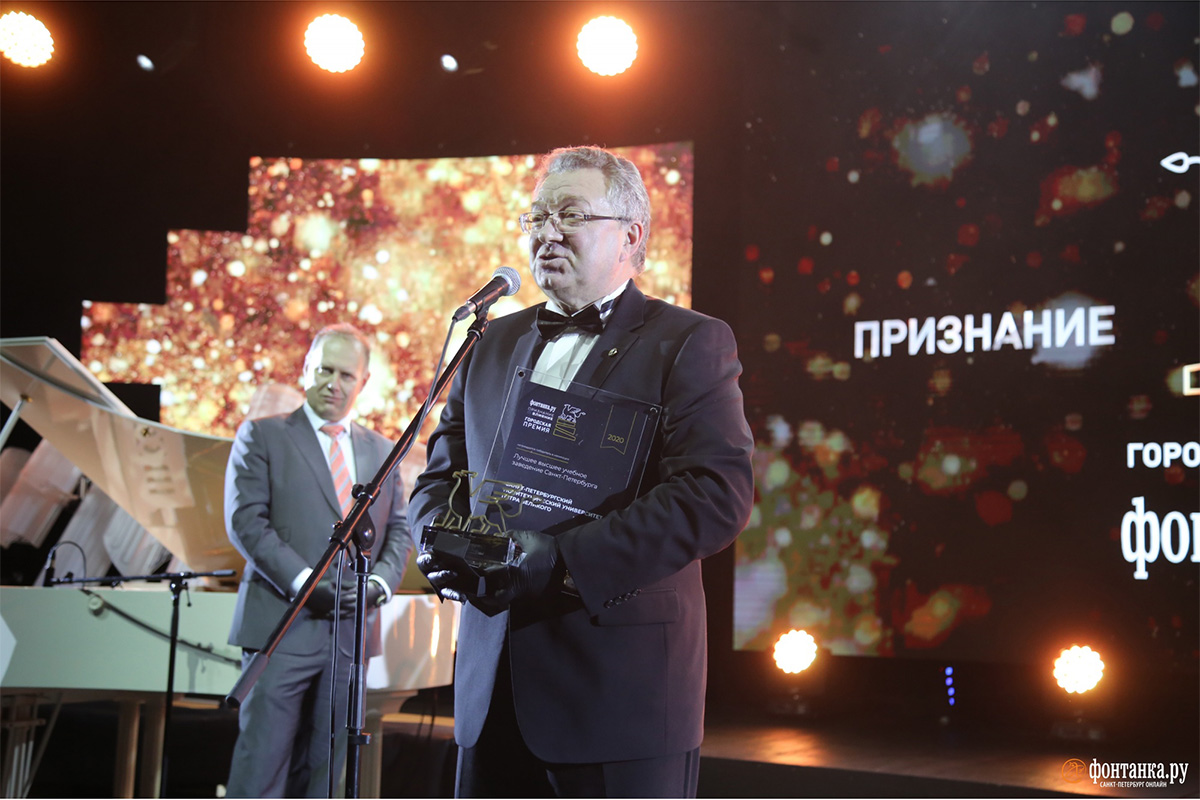 According to the organizers, the annual city prize “Fontanka.ru - Recognition and Influence” is a token of gratitude from citizens to the most high-quality businesses in St. Petersburg. In 2020, it is a special mission to select the best and present them with awards. After all, this year has been a real test of fortitude and endurance for many. And for Fontanka it also is the year of its 20th anniversary. The winners were chosen by popular vote at Fontanka.ru. Voting for the best enterprises, companies and projects in the city has been on the site since September. During this time, finalists were determined in each of the 10 nominations; they have competed for the right to obtain the Golden Griffin and recognition of all St. Petersburg. The winners were awarded by the partners of the event and “Heroes of Fontanka,” real national heroes, whose good deeds and exploits the edition wrote about in 2020. 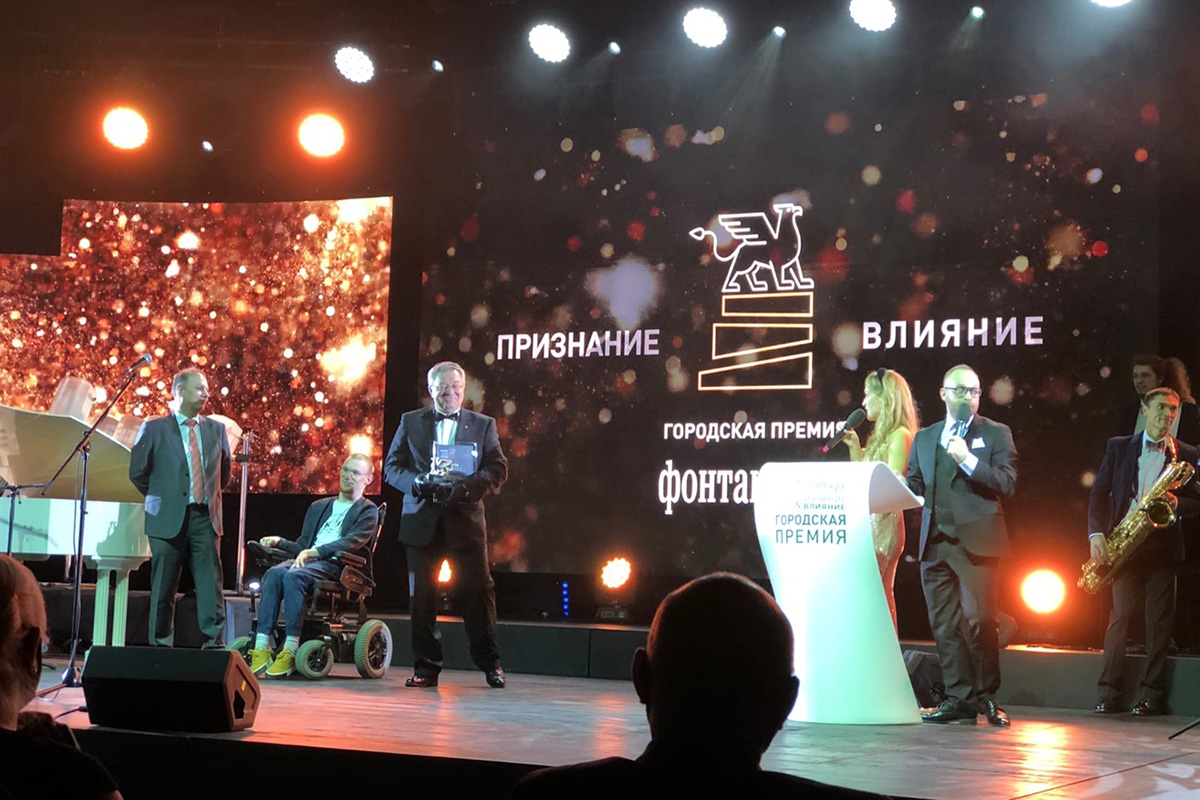 The ceremony of announcing the results of the popular vote was held in compliance with all safety requirements and in a closed future. The presenters of the ceremony noted that in 2020, because of the pandemic, every educational institution in the city had to try distance learning, which was a challenge for both students and teachers. According to those who voted, the university that provided the best educational process under the current circumstances was SPbPU. The Golden Griffin, Diploma of the Prize Laureate and souvenirs were presented to the Rector of SPbPU, Andrei RUDSKOI, RAS Academician, by Alexander KONYSHKOV, Manager of SMP Bank St. Petersburg Branch, and Ivan BAKAIDOV, "Hero of Fontanka".

“The unpredictability of the situation is the main thing that both teachers and students noted,” KONYSHKOV said. “It is not only the work in the classroom, but also the possibility to set up the learning process remotely, to organize all the work so that students would get what they came for. It requires a high level of professionalism. This is a very important nomination because these people are doing an important thing for you and me - educating our future.” 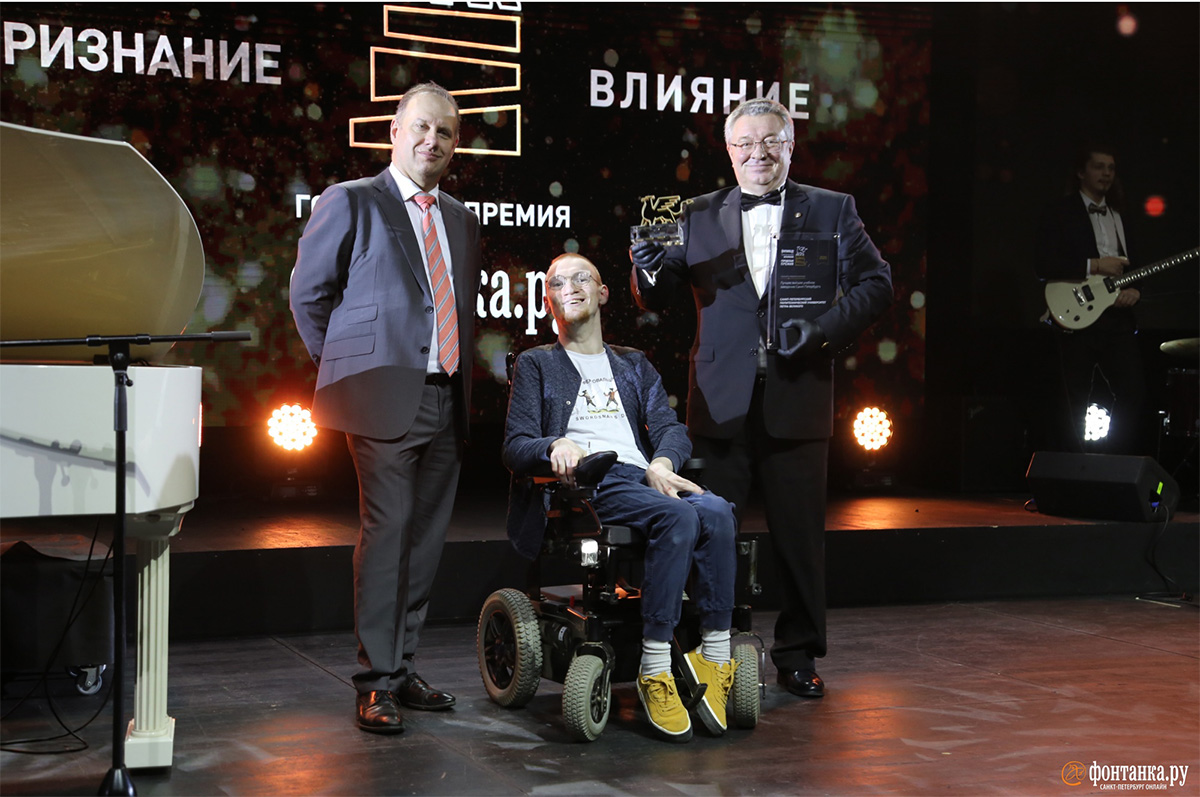 Congratulating Fontanka.ru on its 20th anniversary and wishing that the number of its readers would multiply, Andrei Rudskoi said: “The first time you receive this nomination, it can be assessed as luck, a happy accident. But this is the second year in a row that we are the best university in the city. Thank you, Fontanka! Victory is not necessarily first place, victory is when you get better.” In what way has Polytechnic University become better this year? The head of the university enumerated a few achievements: “These are five stars of the international QS ranking agency for the quality of online programs for students in Russia and foreign countries. These are tens of thousands of students from Russia, China, Europe and other countries. This is the working group led by Professor Borovkov, who made a mathematical model of the spread of coronavirus, and it was used by the leaders of many regions, including St. Petersburg and Moscow, and the Russian Ministry of Health to make the right decisions and minimize the risks. It is the 37th place in the world in THE ranking based on the UN principles of sustainable development, where we are talking about the environment, working conditions, and taking care of people with disabilities, for whom we provide a normal learning environment. It’s the status of a world-class Advanced Digital Science Center, which our university received this year. It’s also our TV studio, where we host wonderful programs and invite everyone to collaborate. And most importantly, a few days ago we presented at VUZPROMEXPO the first Russian electric car based on digital twin technology; within two years, we have designed it in our university, from the requirements specification to the pre-production prototype. Using the latest technology, we showed Russia and the world what role higher education can have in the economic space.”

Marianna DYAKOVA, Head of SPbPU Public Relations, admitted that this year’s victory was quite unexpected: “The first time it was all based on some kind of labor enthusiasm, and the second time it was difficult to earn first place for many reasons: colleagues from other universities also strive to win and it had been a difficult year. But Polytechnic University tried to keep up with the times, to adapt to changes, to seek new methods and approaches, to be even more professional. All the staff understood this, so they developed. This is the second time we have won this award, as they say stability is a sign of excellence, and we have been able to show it. In my opinion, the Fontanka Award is a great initiative, incentive and motivation.