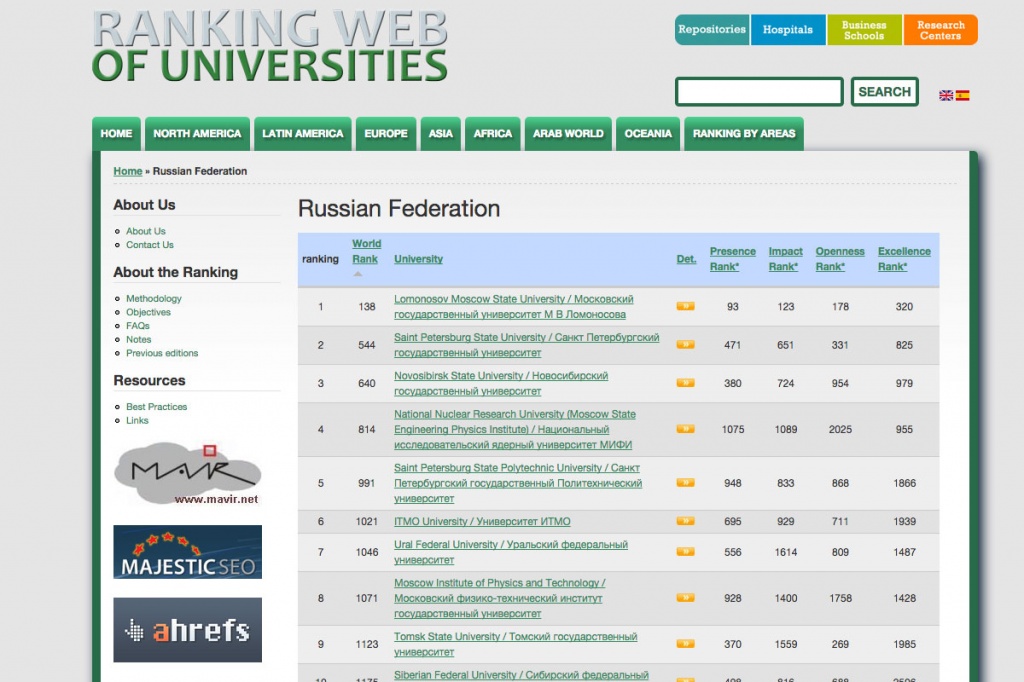 Since the previous version of the ranking was published (February 2015), the position of SPbPU among the world's educational centers has risen from 1104 to 991, so the Polytechnic University has improved its performance by 113 points. in the Russian ranking list the dynamics is especially noticable: just over six months SPbPU has moved from the 14th to the 5th place. It should be noted that among more than 1,500 Russian universities which were web-ranked, only five could get in the top-1000: Moscow State University (138th position), Saint-Petersburg State University (544th position), Novosibirsk State University (640th), National Research Nuclear University MEPhI (814th) and Peter the Great Saint-Petersburg Polytechnic University (991st).

The Webometrics rankings are based on several criteria (each has a certain weight coefficient), according to which it is evaluated how successful a university is, depending on its position on the Internet:

According to the Vice-Rector, press-secretary of SPbPU, D.I. Kuznetsov, the purpose of the Webometrics ranking is not just to assess the design of a university’s web resources, their usability or popularity of the content based on the number of visits, but to increase the prestige of educational institutions, advance their academic activity in the virtual space: “The Polytechnic University participates in the Program of International Competitiveness Improvement. That is why there is active work focused on improving the core indicators indexed by the largest world rankings - Webometrics, THE and QS. Promotion in Webometrics has a positive effect on the position in other rankings, strengthening such indicators as internationalization, academic reputation, involvement of foreign professors and students.”

As noted by the head of the Department of Advanced Information Technology of the Media Center of Saint- Petersburg Polytechnic University, V.M. Tuchkevich, just a year ago, the presence of the university in the virtual space was below the expected position. Due to this the administration of university revised the web-policy and began systemic work on the start of the new university portal: "The website has been updated and reorganized on the basis of the best models of world’s universities, according to the latest trends of web design. The information structure has been completely redeveloped. Due to the use of responsive design technology, the resource became available to a wider audience." In addition, assistance is provided to increase the number and quality of teachers’ electronic publications, and to form contents that are actively in demand and widely cited.

“Polytechnic University is university with a huge research and educational potential and modern technological base. Up to date, his website displays the multifaceted activity of University. It is an effective instrument of scientific communication. Using modern web technologies, we will continue to make every effort to extend our academic opportunities on the world educational stage more fully”, summed up V.M. Tuchkevich.