THE 2015-2016 (Times Higher Education) World University Rankings were published today, Peter the Great St. Petersburg Polytechnic University occupying positions 201-205. It was the first time our University was mentioned in these Rankings among 13 other Russian universities becoming second only to Lomonosov Moscow State University. 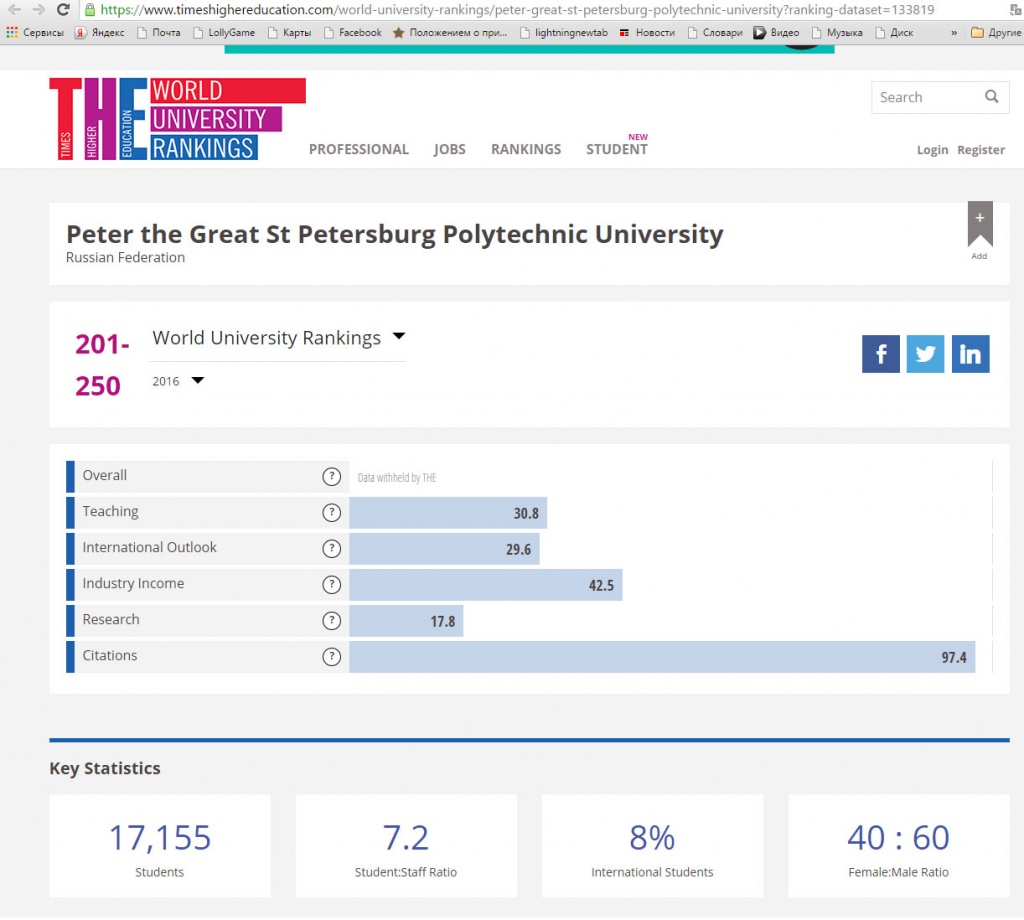 “This result was not completely unexpected but I cannot say that we had counted on such high positions”, commented A.I. Rudskoy, Rector of SPbPU. “This is one of the consequences of our continuous scrupulous work that we have been doing for several years”.

THE World University Rankings have been published by Times Higher Education Journal since 2010, which specializes in news and other issues concerning higher education. The key criteria are: teaching, research, citations, international outlook and industry income. “Cooperation with the industrial sector influences our University greatly. The list of our strategic industrial partners has become much longer. The results of research carried out by our Engineering Centre, which has been officially acknowledged as the best one in Russia, namely the creation of new materials, are applied in the following industrial branches: ship- and aircraft building, transport systems and aviation”, said the Rector. Part of the data necessary for the rankings is submitted by the University, namely its budget and the ratio of staff to students. The rest of the criteria are calculated by the compilers of the rankings assessing the academic and scientific reputation of a university, the number of articles published and co-authorship with foreign scientists.

Peter the Great St. Petersburg Polytechnic University is ranked so highly owing to Project 5-100 and stimulating the faculty of SPbPU to do research. This resulted in an increase not only in the number of published articles, but also in the number of citations of these publications. Currently, the Polytechnic University is number 23 in the world according to the number of citations. “At present, as Program 5-100 run by the Ministry of Education and Science aimed at boosting the competitiveness of Russian universities has begun to be implemented, as the Russian Science Foundation is operating at full pace, and we have won a series of grants, our systemic approach in terms of involving the leading scientists in the world – all this has enabled us to considerably improve the quality of our research and the publications correspondingly. It is a long time since we started encouraging our scientists to publish more actively, and the main criterion has been the opportunity to publish the research results in journals which are most often cited and have a high impact factor”, explained Andrey Ivanovich.

The difference between the positions of the Polytechnic University in THE Rankings (201-205) and the recently published QS Rankings (471-480) lies in the fact that more than 50% of the QS indicators are defined by the academic reputation and employers’ assessment, while Times Higher Education Rankings take into account the indicators described above that are more important from a scientific point of view. The Polytechnic University is ranked especially highly in the sphere of life-science (interdisciplinary research spanning physics, biotechnologies, medicine, pharmacology, etc), nanotechnologies, materials science, physics and astronomy. “I believe it is determined by the history of our University, where fundamental research has been carried out since the time it was founded and strong research schools have been developed in the field of natural sciences and materials science”.

A.I. Rudskoy claimed that it was an undoubtedly pleasant surprise that the Polytechnic University had become one of the leading Russian universities according to that highly authoritative ranking. “At the moment we are faced with a real challenge, which is to keep our position. Believe me, it is even more difficult than what we have achieved so far. By all means, we are going to do our best not to lose our position, as well as to glorify Russian science and the system of education”, summarized the Rector of SPbPU.