Professor Herbert Huppert is not only an outstanding scientist, but also a person with a sparkling sense of humor. “After my lectures, in an amazing way, it’s messy on the lecturing desk and orderly in the audience’s heads,” he says. It is not surprising that Professor Huppert’s lectures are always to a full house. He shares his knowledge with students all over the world, giving lectures on fluid mechanics, granular flows and geophysics, which are accompanied by experiments and case studies. Recently Professor Huppert has visited Peter the Great St. Petersburg Polytechnic University (Russia), and had a talk with its representatives. We talked with Professor Huppert and asked: what qualities must you have in order to become a successful scientist; what distinguishes a person of science from a politician:  and why a professor should insist on giving students the opportunity to take exams at any time of the day by their choice. 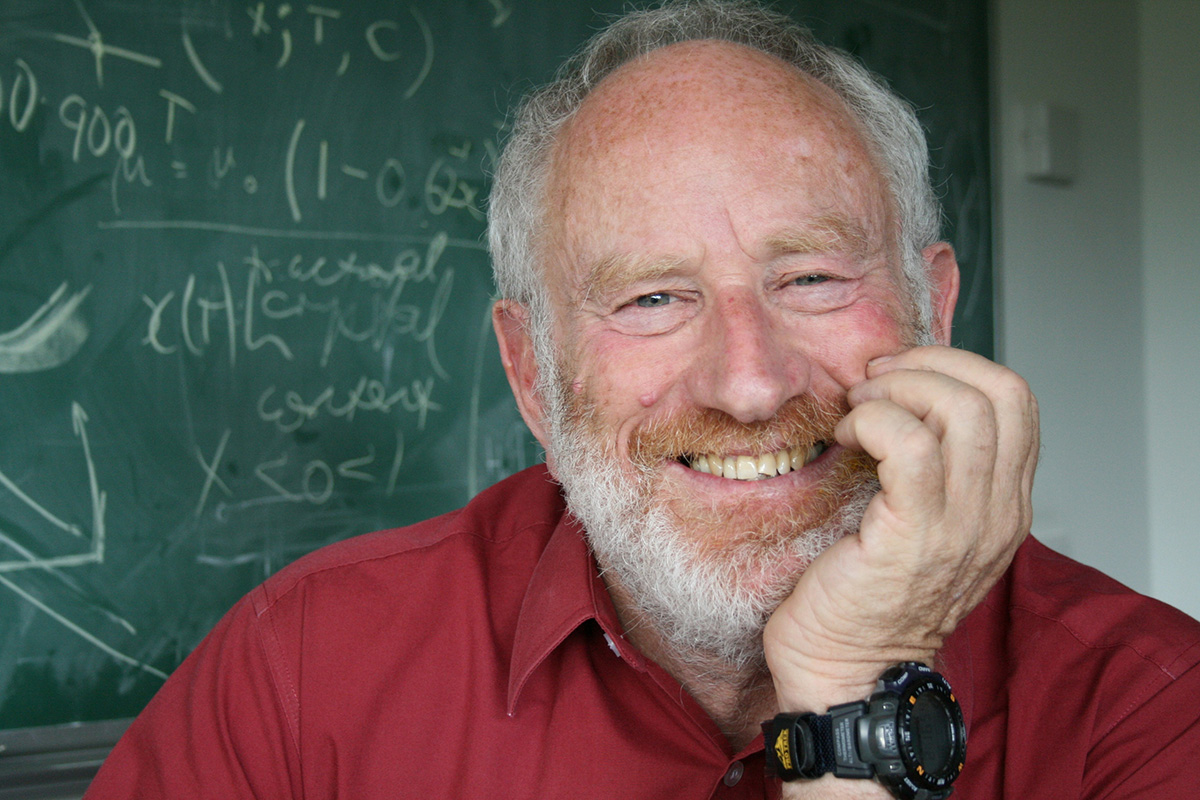 - Professor Huppert, it is very pleasant that now you are a good friend of Polytechnic University! Would you tell us how you got acquainted with it?

- I came to Russia last summer to attend a conference on Advanced Problems in Mechanics, which was taking place at your university. After the event, its organizers (Higher School of Theoretical Mechanics – Ed. Note) invited me to come again to tell students about the principles of convection, gravitational flows, the propagation of cracks in solids, and climate change. And now, together with your university scientist Vitaly Kuzkin, we are working on a scientific article. 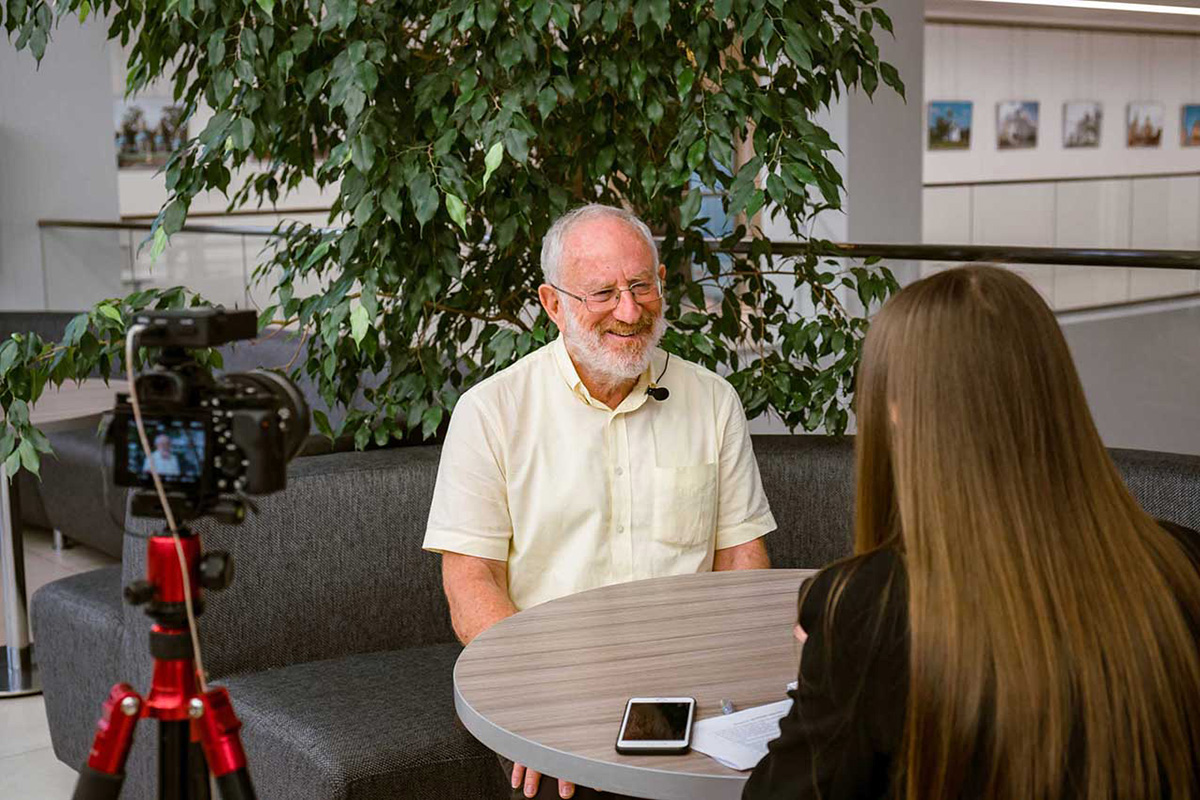 - What will this article be about?

- About 30 years ago, I conducted an experiment with honey. Its fluidity corresponds to the behavior of volcanic lava moving on the ground. The results of my experiment have wide scientific and industrial applications and became quite famous. But I wondered what would happen if the surface along which the lava flows is not flat, but has impediments? For example, some elevations on the surface of the earth can be high enough for lava not to overcome them. With Vitaly, we are computing such situations in order to understand what changes would occur in the movement of lava and what impact these irregularities on its path might have. 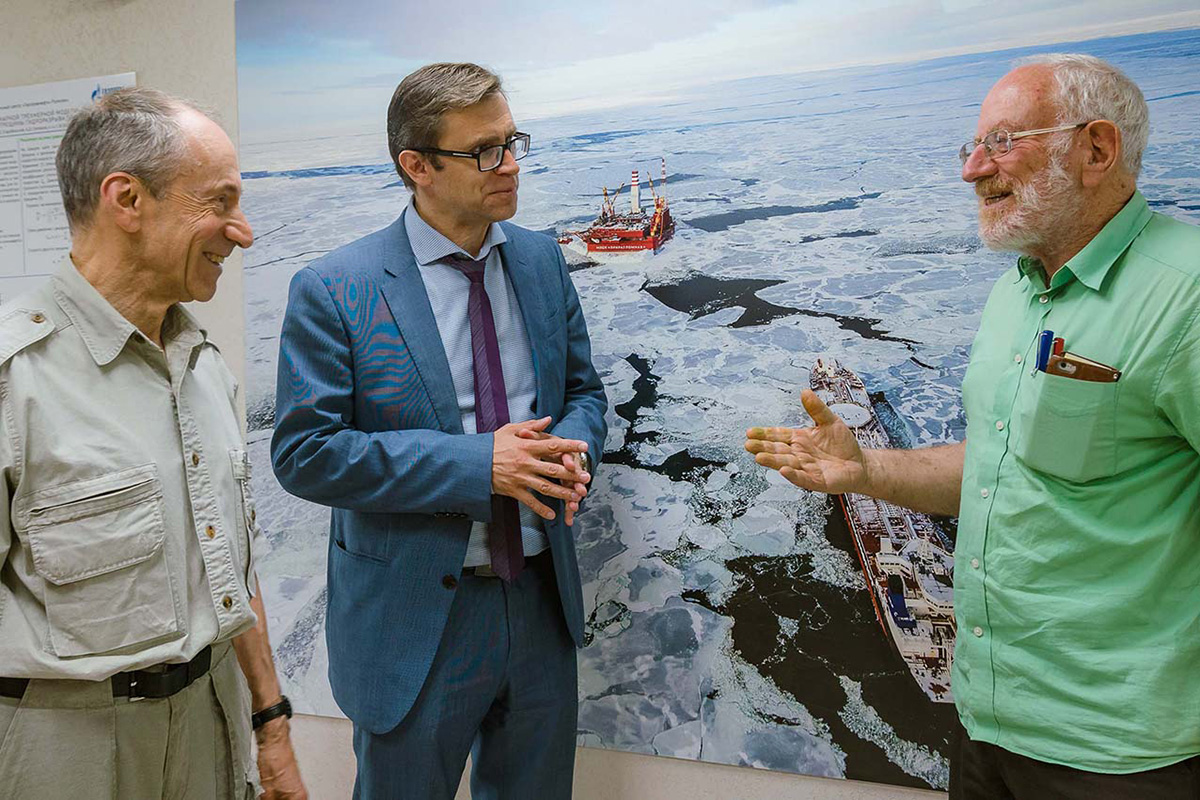 - We’ll be looking forward to the release of the article! By the way, have you considered this issue with students at your seminars?

- Yes, I did touch on this topic. The workshops were dedicated to solving problems in fluid processes. I spoke about different aspects of liquid media which play a huge role in the atmosphere, the oceans, and affect the movement of magma and lava. Talking about this, I not only expressed my point of view to the students, but also tried to understand their view on these processes; I asked them to share their ideas. I hope it was no less useful to them then it was for me. 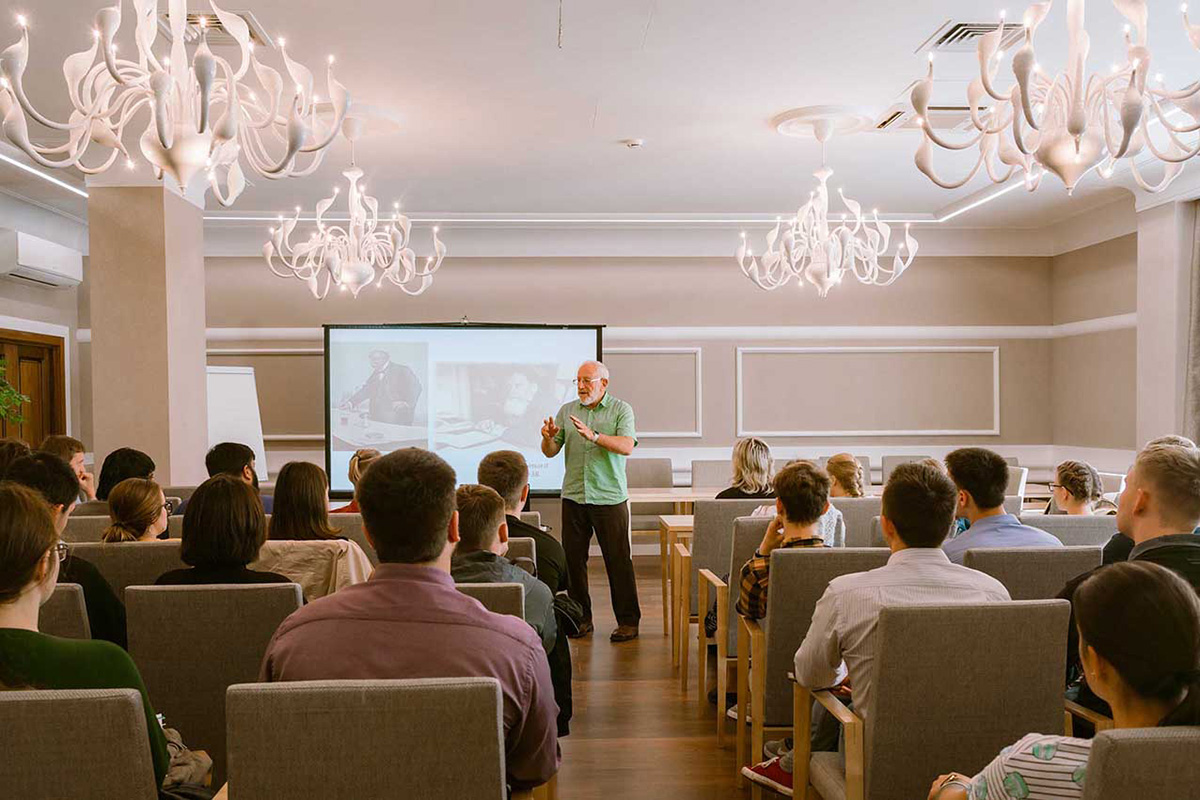 - I think that the fact that you had full auditoriums at each of your seminars proves this quite well. And how often do you hold such meetings with students?

- Last year, I lectured in Australia. I told them that the Earth can become too hot a planet for our grandchildren and great-grandchildren, and why politicians and scientists are different.

- Well, let’s consider a problem. A politician would say: “I want to know the answer now!” and would come up with some solution. A scientist would say: “What an interesting matter! If you give me 10 million pounds and support three students, then I will give you an answer in 5 years.” But you can be sure that the answer will be correct and accurate. For politicians, science and accuracy are not so important, especially if an answer is urgently needed. And for scientists, it’s important to find exact scientific answers, and no matter how long it takes. 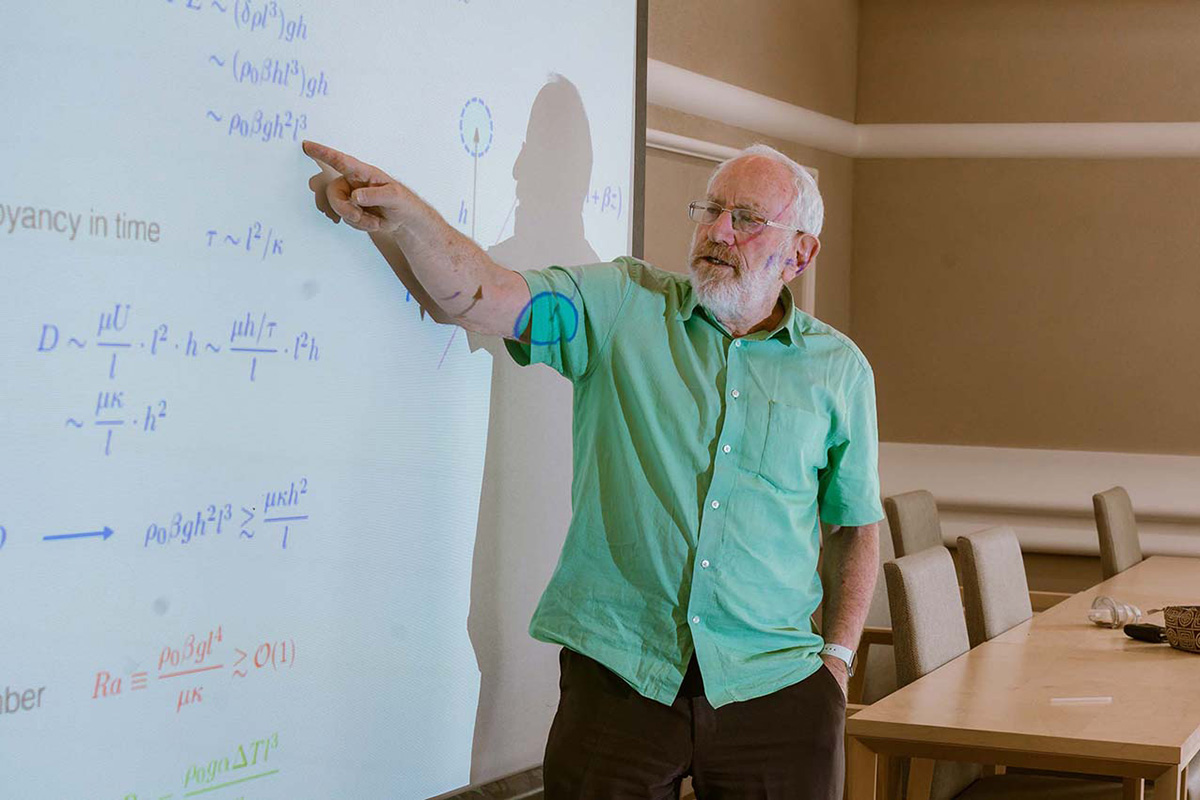 - And is the younger generation interested in finding exact answers?

- I see that many young people are interested in science. They scrutinize climate change and wonder why it is sunny today and cloudy tomorrow; why it gets hotter every year; what it signals; and why earthquakes happen. They want to understand how things work, how we live and how we age. And they crave for answers to these questions. They are always interested when I show them experiments applying to real life. 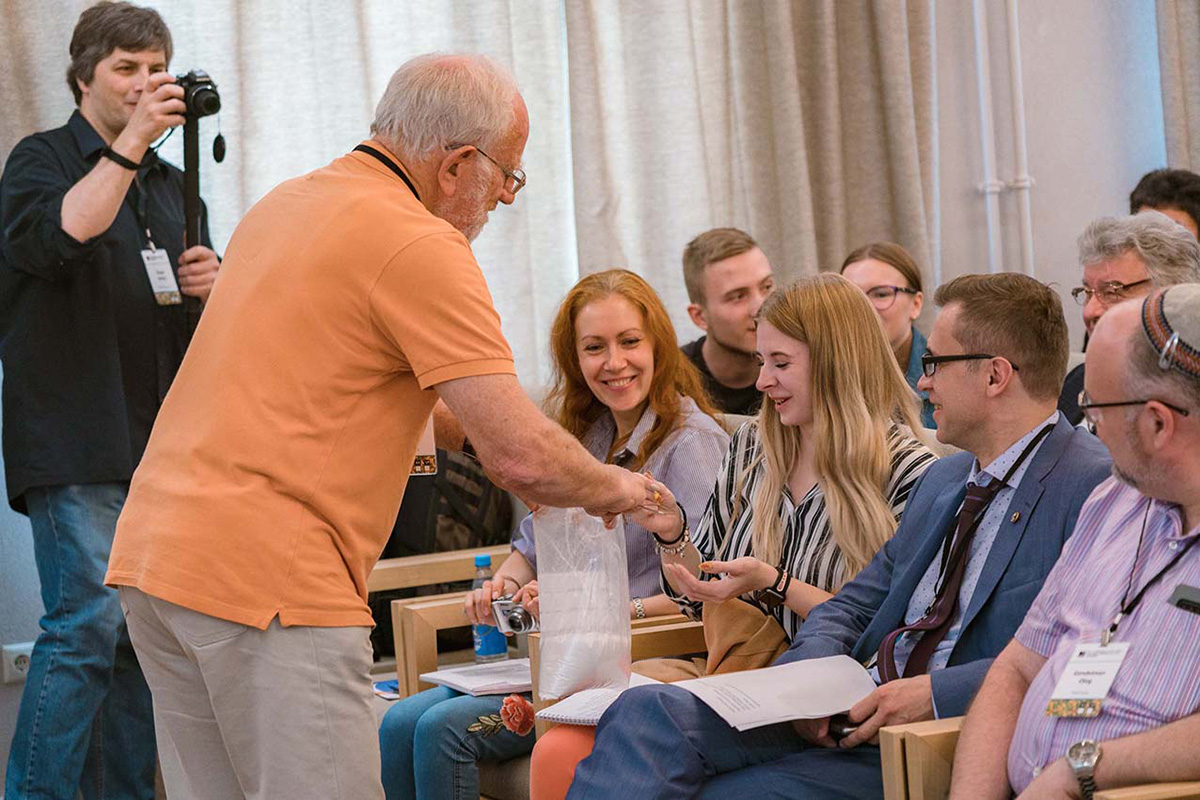 - What qualities will enable them to become successful scientists?

- Broad outlook and good imagination. I’ll give you an example. At each seminar, I show students a real problem that I am going to solve. And once, one of your students said to me politely: “What you have just showed is enough. I can give you the answer.” And I replied to her that this could not be possible; it was only an assumption for solving the problem, because the problem could be looked at differently. After all, what I showed was only an experiment with honey spilled on the table, a sample. And things can change. It is very important to have imagination in order to be able to see everything differently, from the other side. In my opinion, this is the most important thing in the work of a scientist. 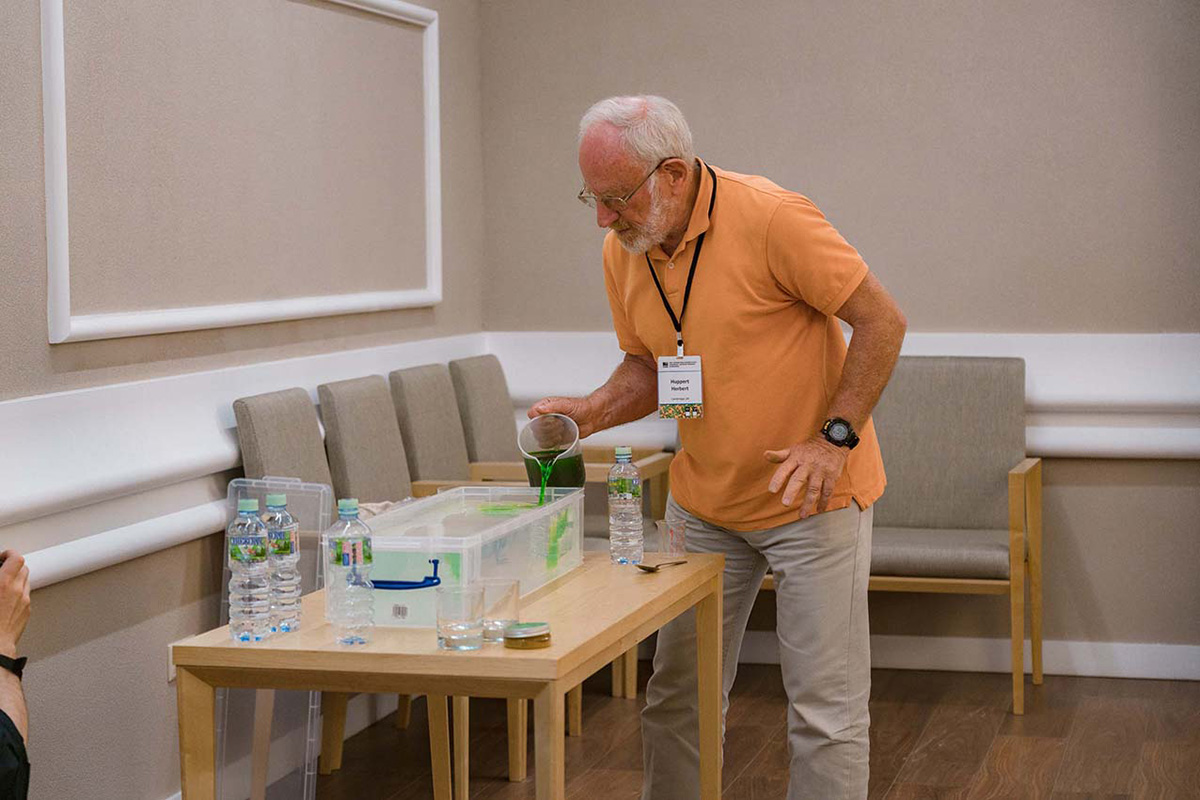 - Which scientific area is the most popular in our time in your opinion?

- I think, it’s biology. Everyone more or less understands physics, but with regard to biology, there are so many questions with no answers so far: why do our brains look the same, but each one works in completely different ways; why some people speak 20 languages, and some find it difficult to manage just one. Yes, we understand that these are features of the brain, but still ... how does it work?

- And what, in your opinion, is the most important scientific achievement of the 21st century??

- It’s hard to answer. Perhaps, it’s the development of high-energy processes. One of my favorite examples is the story of Robert Fitzroy. He commanded the Beagle expedition, in which Charles Darwin took part. He was appointed as the second Governor General of New Zealand in 1842. In order to reach New Zealand from London, he, his family and the crew had to live through 9 months of exhausting journey. And now, after 100 years, we can travel the same distance in less than 24 hours. Imagine Fitzroy’s reaction! “What?! I spent 9 months on that damn ship;  and you can do it in about a day? I do not believe that!"  So, technology is developing, and that is our greatest achievement. Another significant scientific achievement, in my opinion, is mobile phones and general technical advances.

- Professor Huppert, let's get a little personal. What is your favorite book?

- I like various books; it's hard to choose one. Let me tell you about the book Sleep, which I read just recently. It was written by Nick Littlehales. It is about a football adviser who was interested in the science of sleep and advised many football teams. Imagine: the match is coming to an end, having been delayed by rain, and then extra time, leading to a penalty shoot out.  The score is 5:4, and the coach needs to choose a player who can take the crucial penalty. Among the equal strengths of players A and B, he decides in favor of player A. The guy misses, the team loses. The author explained the trainer's mistake: people are composed of “larks” and “owls”. The former feel great in the morning, but by the evening they are already tired. The latter get up later, but remain awake until late at night. Player A was a “lark”. He was already exhausted by the end of the match. Player B was an “owl”, and for the crucial penalty it was necessary to choose him. 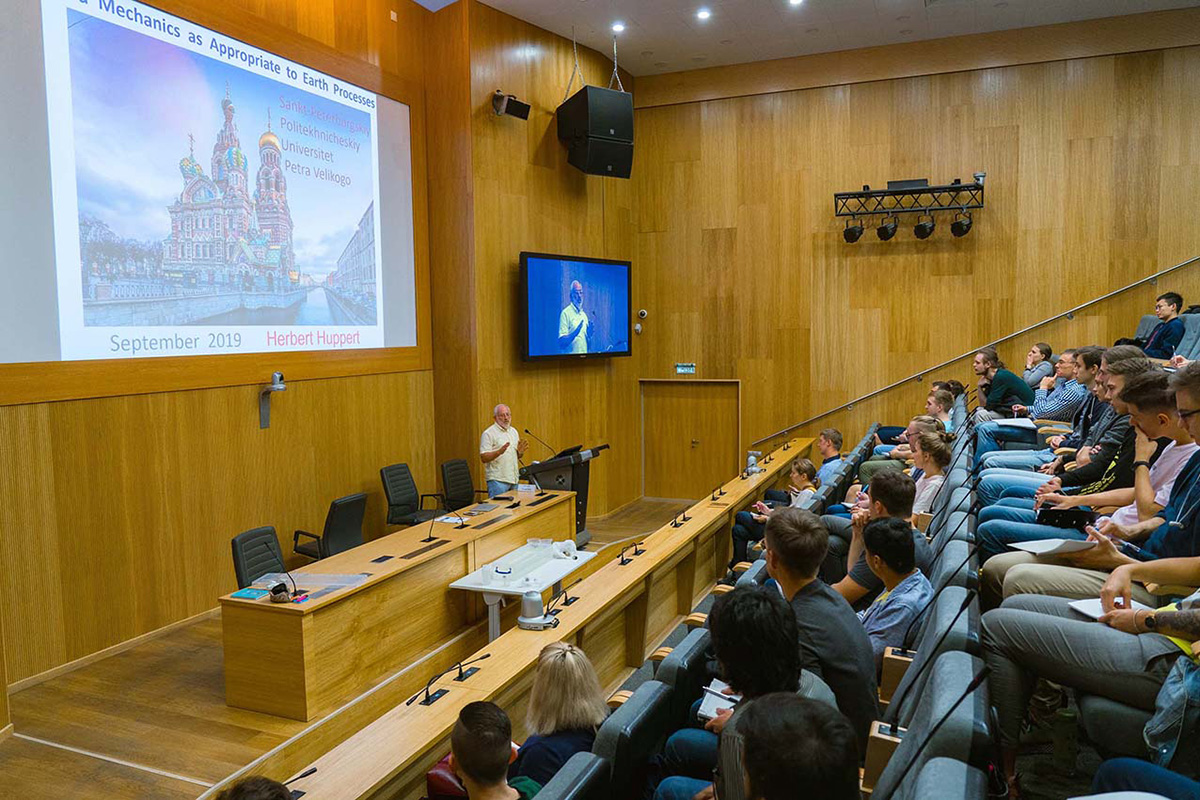 - Why this exactly book was so interesting for you?

- The author cites excellent examples. I read the book and thought: after all, exams in the early morning are an advantage for the “larks” and an ordeal for the “owls”. The “larks” would easily pass the morning exam with excellent marks. For the “owls,” it can seem terribly complicated. So why can’t it be that students take exams at a time convenient for them? I am sure that the university administration would say that this is stupid and ridiculous – to let students take exams at the time they prefer. But if I find a person who can conduct good scientific research, write a scientific paper and prove this theory, I would allow my students to take exams at a time convenient for them.  And allow graduate students to work at their “best” times.

- Professor Huppert, thank you very much for the interview! We are waiting for you again at Polytechnic University with lectures, seminars and new interesting stories!

- I have already accepted the invitation to the next conference on “Advanced Problems in Mechanics”. Thus next summer I will definitely return to Peter the Great St. Petersburg Polytechnic University.

Professor Herbert Huppert is an outstanding scientist. He teaches at the University of Cambridge and Bristol, the University of New South Wales (Australia); he is a member of the Royal Society, the American Geophysical Union and the American Physical Society. The professor has written over 280 scientific papers on applied mathematics, fluid mechanics, geophysics, meteorology, oceanography, geology and the natural sciences in general and has a Hirsch index of 78 (according to Google Scholar).