The Polytechnic University participated in the video conference with Deputy Minister of Education and Science of the Russian Federation A. A. Klimov

On 2nd December Deputy Minister of Education and Science of the Russian Federation Alexander Klimov took part in the televised Q&A session between Moscow and St. Petersburg. During the session Alexander Alexeyevich estimated the situation in the Russian higher education and answered important questions. The press event involved the following representatives of the Polytechnic University: senior vice-rector V.V. Gloukhov; vice-rector, press-secretary D.I. Kouznetsov, and students, who took advantage of getting answers to their questions firsthand. 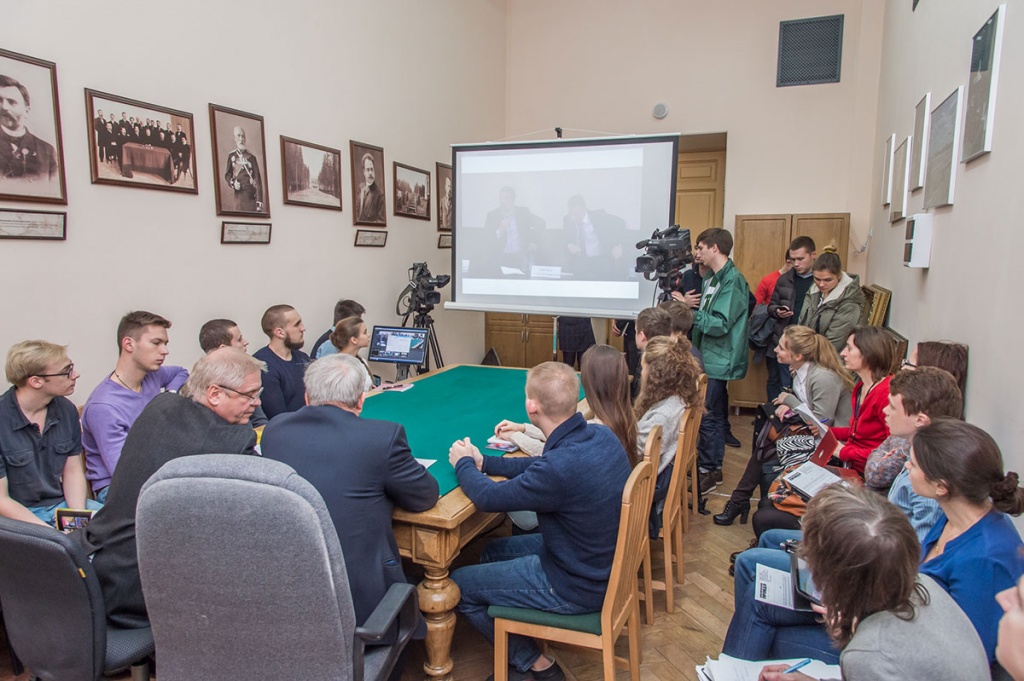 "The main goal of Russia's Ministry of Education and Science is to improve the quality of education, this dominates all our activity. We are making great efforts to improve standards of higher education, to make it more practical, to allow a university graduate to find a job by his/her major, - said Alexander Alexeyevich in his welcome speech. - We also discuss the rights of students, their priority is one of the issues in our activity". 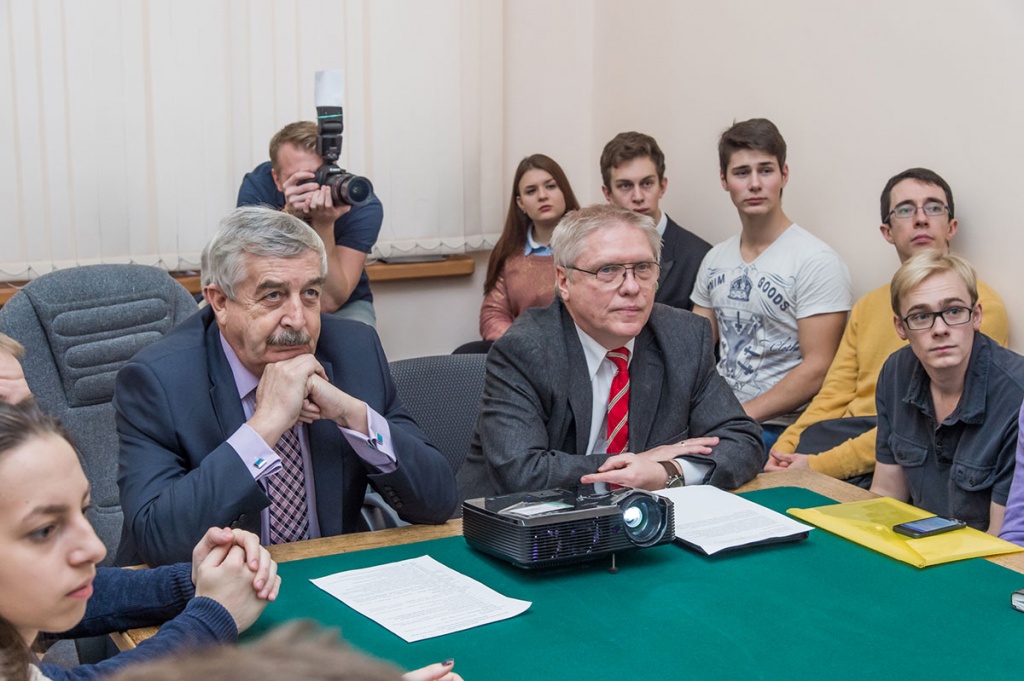 The topic of the Q&A session is formulated as "A Russian student: how to enter the university and to be competitive on the labor market". However, the students did not ask the Deputy Minister only the questions within the topic. They asked even tricky and pressing questions. E.g., how will the current geopolitical situation affect a scholarship? Who will secure a job for a graduate? What are most in-demand majors? Why are some universities being reorganized, whereas others keep working below par? How is it possible to increase a number of lecture rooms? Has the quality of higher education become lower with the transition to the Bologna format? How to activate university student government in making important decision? These were the questions not only to the Deputy Minister, but to other speakers: First Vice-Rector of Plekhanov Russian University of Economics Leonid A. Bragin, chairman of the Russian Youth Union Pavel Krasnorutsky, students' ombudsman in the Russian Federation Artem Khromov. 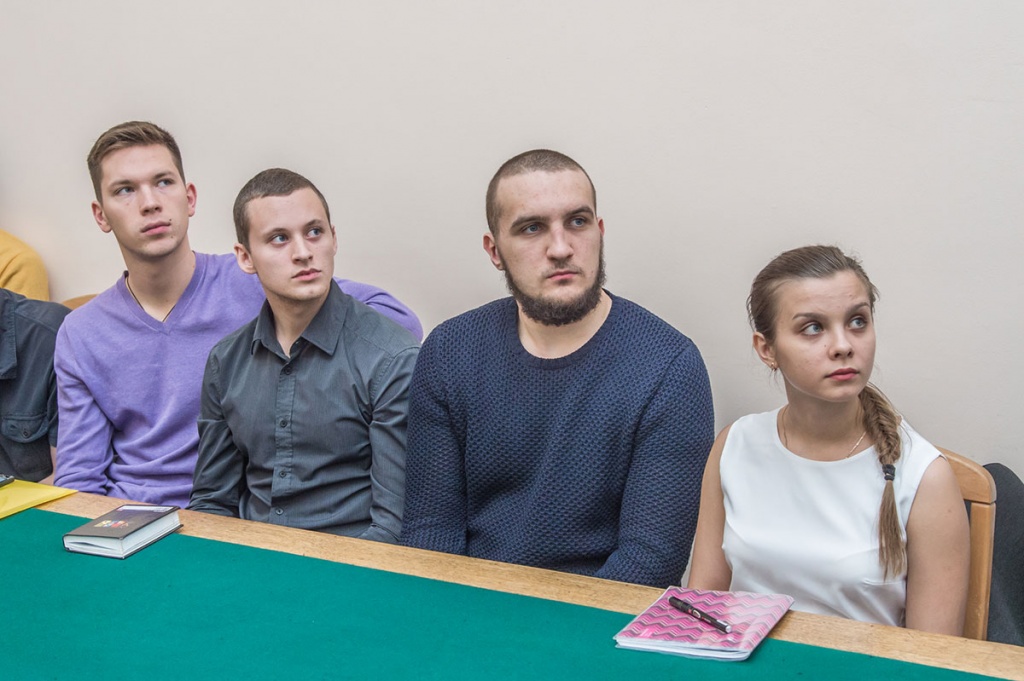 At the beginning of the Q&A session participants were greeted by SPbPU Senior Vice-Rector V.V. Gloukhov. Vladimir Viktorovich stated that the Polytechnic University fully supported Ministry programs, such as Open Education, E-learning, Use of International Relations, Social Security Improvement. "Our students are activists who the university administration rely on. They are fully prepared to take part in today's event", - said V.V. GLOUKHOV.

Philipp ZLOBIN, Institute of Metallurgy, Mechanical Engineering and Transport, 5th Year: The mass media have recently reported that all universities will have the position of ombudsman. But according to the Federal Law No. 273, article 26, "On Education in the Russian Federation", student representatives in university are student councils and unions. This raises the question whether it is legitimate to introduce the position of university ombudsman into Russian higher education institutions.

A.A. KLIMOV: I would call ombudsmen "people who protect students' rights". It was very important for us to activate the university student government. We are also confirmed that introducing this position at university is to be a decision of the university and its students. Standardized regulations in the conditions of such a vast country are not correct. If students find it important and essential to introduce such a position to control independently students' rights protection, the university can take a local initiative by dividing responsibilities between bodies of the student government. We do have a positive experience to introduce the position of ombudsman into universities.

A. KHROMOV: I will answer as students' ombudsman in our country. We are studying the international experience of student organizations, we are considering their structure and authorities, analyzing their performance. We do not want to enforce the position of university ombudsman. We do not have to hurry, we have to understand how it will work. If this experience is successful, the position of ombudsman will be introduced.

Daria STRAKHOVA, Institute of Industrial Economics and Management, 5th Year: Today one of the fast evolving programs is the Global Education program: many students go abroad to study with the state support; later they come back and work for Russian companies. Could you tell us which majors are in most demand according to this program?

A.A. KLIMOV: This program is implemented in compliance with the Presidential Decree from 2014. The target is that over 700 young people go to study abroad within special profile programs. The program involves world's leading universities of high rankings. The students who completed their overseas studies can apply for 550 jobs in the largest Russian corporations. When it comes to your question, the most popular majors are engineering, technology, medicine, social security management, teaching and science.

Andrey LAPECHENKOV, Institute of Metallurgy, Mechanical Engineering and Transport, 3d Year: Recently, students have been socially supported by such a mechanism as scholarship. This has been regulated by Government Decrees No. 945 and 679, Federal Law No. 273. How will this mechanism be fulfilled in the current conditions?

A.A. KLIMOV: All responsibilities and obligations that the state undertook and claimed in statutory documents will be fulfilled. Today there has been held the second hearing of the FY 2016 budget, and has been decided to allocate 700 mln roubles for the student support. We cannot talk about the rejection of obligations, their fulfillment is a priority for the Ministry of Education and Science. I have watched the scholarship bulletin and found out that last year a student who showed great achievements in research and education got an average scholarship of 49,000 roubles. It proves that everything depends on a student and his/her performance.

It is worth noting that during the televised Q&A session A.A. Klimov repeatedly mentioned great achievements and role of the Polytechnic University in the Russian science and education. In addition, A.A. Klimov stated that it was the Polytechnic University which had initiated the Russian national platform of open learning; and top car manufacturers relied on the experience and engineering developments of the University's researchers.