The American Program of Educational Grants Was Presented in the SPBPU

On March 30, 2015, the delegation from the USA represented by the Director of the Fulbright Program in Russia Joel Erickson and the President of the Broward College David Armstrong visited Saint-Petersburg Polytechnic University. 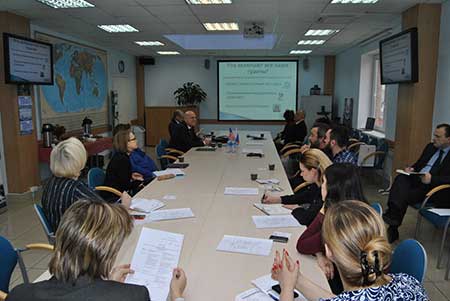 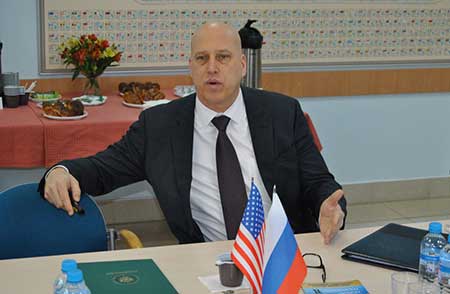 The presentation of the Fulbright Program was dedicated to grants for Russian applicants. It contained information about the Master's programs, study placements, different programs for higher-education teaching personnel, young English lectures, researchers, the representatives of the International Departments of Universities, and also about summer schools.

The participants expressed their interest in bilateral interaction between educational institutions organized with the help of grants. The representatives of the SPBPU's international services and institutions suggested establishing contacts with American Institutes of Higher Education in order to implement the programs of cooperation. In particular, the opportunity to collaborate with the Broward College with the support of the Fulbright Program was discussed. The President of the College Professor David Armstrong presented the project that allows combining education in Russia and the United States. This project has been already successfully implemented on the base of Kazan National Research Technological University.

The negotiations resulted in the agreement of the parties to consider the opportunity for further cooperation in the following areas: student exchange projects, summer schools, visiting professor programs, assistance in establishing direct contacts with colleagues in the United States on specific areas of knowledge. A special attention was paid to the opportunities of English level improvement (financed under the Fulbright program) for university lectures delivering courses on Bachelor Degree and Master Degree programs in English in Russian Universities.

After the meeting at the International Relations Recourse Center, our American partners had a conversation with the students from the University Polytechnic College "Radiopolytechnikum" and supplied them with the information about cooperating within this program.

The Fulbright Program is a program of grants for international educational exchange. It was founded by United States Senator James Williams Fulbright in 1946. The US State Department financed the program in order to strengthen cultural and academic ties between the USA's citizens and those of other countries. It grants international educational exchange for students, scientists, lecturers, professors and artists. On a competitive basis it provides grants both for American and international students, scientists and researchers (including Russian). The program promotes “cross” education, particularly for American students abroad and international students in the USA. The Fulbright Program is one of the most prestigious grant programs operating in more than 155 countries.