A significant event took place at a time of an extensive development of SPbPU international cooperation with French educational and public organizations. It was a meeting with Marina Schelkunova, the Head of "Campus France" agency in Saint Petersburg and an Educational Program Coordinator in French Institute, Saint Petersburg.

"Campus France" is a French national agency for the promotion of higher education. The Russian branch was established in 2007 on the basis of French State Agency EduFrance (founded upon an initiative of the Ministry of Foreign Affairs and Ministry of National Education (France). 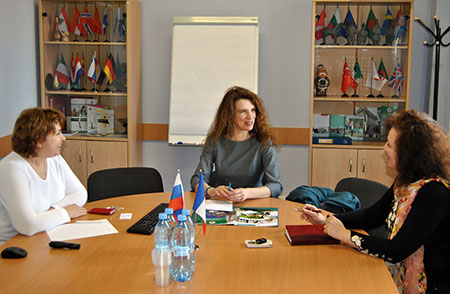 During the meeting, held on 8 April at the International relations Resource Center, A.L. Mazina, Chief Deputy of International Relations Administration and N.V.Sokolova, Chief of International Interacademic Relations Department, informed about SPbPU current collaboration with French Universities and its priority areas of activity. Marina Schelkunova underlined some potential ways of cooperation between "Campus France" and Saint Petersburg Polytechnic University. In particular, they discussed the opportunities to extend the cooperation between SPbPU and French Universities and organizations with the assistance of the French Institute and "Campus France" agency. They include running corporate events in SPbPU, the inclusion of SPbPU into the Association of French Universities, participating our university in educational forums, interacademic activities, scientific conferences hold by the Embassy of France in Russia.