From China with Love, or why a Chinese Student Liu Wei has Come back to her Alma Mater

It was so nice to see a graduate of the Polytechnic University as a member of the delegation that arrived from Tsinghua Univesity, China! Liu Wei, or Liuba as her Russian friends call her, has a top position at the Chinese university being in charge of developing cooperation between Russian and Chinese universities. Today, among other issues, being a member of St. Petersburg Engineering Academy, she can easily quote N.A. Ostrovsky (Russian Soviet writer, author of the novel “How the Steel Was Tempered”) and Saint Augustine. Liuba told a reporter of the Media Center about her studies at the Polytechnic University, shared her memories of her student life and she even tried to find her former group mates relying on our help. 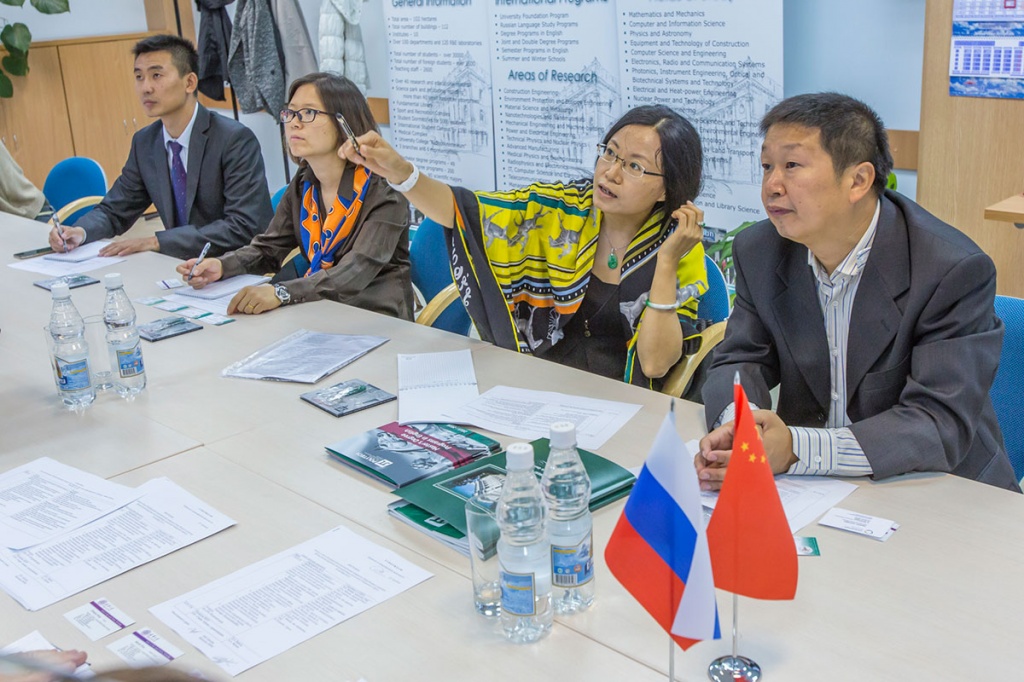 - Liu Wei, could you tell me which faculty of the Polytechnic University you studied at?

- I studied at the Polytechnic University for ten years, from 1988 to 1998. At first I was a student of the Foundation Faculty, then I got my bachelor’s and master’s degrees with honors as a student of the Faculty of Mechanics and Machine Building and I defended my PhD thesis at the Department of Flexible Automated Systems.

- Why did you choose Russia and the Polytechnic University?

- Which subjects were your favorites?

- I enjoyed the Strength of Materials, Electrical Engineering and Descriptive Geometry most of all. I can still remember drawing diligently every evening of my student life. I also got the second place at the city competition in the Strength of Materials in 1991 being the only participant from abroad. Many students and colleagues subsequently asked me why I had chosen such a “masculine” profession. At present I am working in the sphere of technology transfer and I am responsible for the cooperation between Tsinghua Univesity and Russia in the field of research and innovation and the knowledge received at the Polytechnic University helps me a lot.

- Where did you study the Russian language?

- I had been studying it at secondary school for 6 years so when I came to Saint-Petersburg I already knew grammar well. However, there were problems with the spoken Russian, especially with pronunciation. But after studying at the Foundation Faculty for a year I started speaking Russian fluently. It is interesting that at first I had to ask my friends to give me their notes because I simply was not able to make mine during lectures. But when the first term was over my group mates started copying my notes because I attended all lectures.

- Could you tell me about your student life?

- I have only the best memories of my student years. My group mates were my neighbors at the dormitory and we had a friendly relationship. They taught me to cook Russian salads, pilaf and many other things. I sometimes cook these dishes at home: my daughter is delighted to eat them!

When I had free time I used to travel a lot. I visited Kiev, Tashkent, Moscow, Khabarovsk, Vladivostok, Novosibirsk, Lake Baikal – and this was only the Soviet Union. I also visited many wonderful European countries. I like the words of Saint Augustine, “The world is a book and those who do not travel read only one of its pages”. I am still trying to read as much as possible.

- What kind of challenges did you face while studying and in general after you came to Russia?

- It was very difficult at the beginning of my studies. In the first place, there was a language barrier. When studying at the Foundation Faculty I shared accommodation with girls from Syria, the Philippines, Bulgaria and the Czech Republic. Without a language that everyone knew it was really hard to solve even the everyday problems. Secondly, we were all missing our families. Letters from home were a great consolation for us so we used to read them together and at those moments we were able to understand each other without words.

We witnessed difficult times – the collapse of the Soviet Union. I still remember food coupons enabling to get sugar, eggs and so on; I remember standing in huge queues to buy something. But in that way the “the steel was tempered” – these difficulties made me stronger as a person. 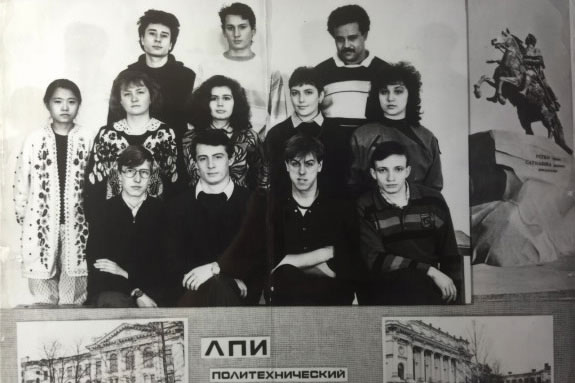 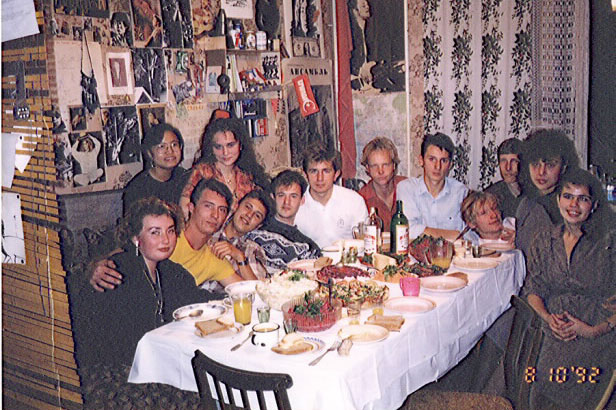 - Do you still keep in touch with your Russian group mates? Have you managed to find friends in Saint-Petersburg?

- After 10 years of silence I have managed to get back in touch with only one of my group mates whose name is Yulia Mamonova. Her mother was born in the former Port Arthur, now Liu Shun, China. Yulia always took care of me, she would often bring me sandwiches and salads from home, and she even let my mother and brother stay in her flat when they came to visit me. I am happy that we have kept our friendship.

In 1995 when we graduated from the Polytechnic University there were neither computers nor mobile phones, many of my group mates went to live in other cities, so we lost touch. I tried to find them: I even visited the archive of the Polytechnic University but the documents found did not contain their contact information. And I wish I could find my group mates! Viacheslav Podoinitsyn, Maksim and Olga Belko, Aleksey Komarov, Dmitry As, Dmitry Sokolov, Masha Kabanova, Elena Panchenko, Lyubov Maksimova, Mikhail Fisenko, Artur Vylegzhanin, Yuri Rakov, please, respond!

- Do you keep in touch with your lecturers? 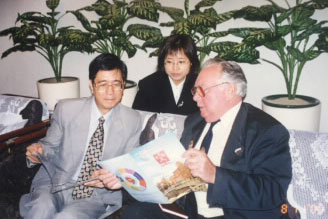 - Certainly! I still keep in touch with my thesis supervisor Aleksei Ivanovich Fedotov, Doctor of Engineering Sciences. He is like a father for me: he knows and remembers everything about me. I have a friendly relationship with Vadim Vasilievich Korabliov, Doctor of Physical and Engineering Sciences, and we work together in order to expand cooperation between our universities. Elena Borisovna Grachiova, Deputy Director of the International Education Office, also helped me a lot; I got acquainted with her in Beijing.

- In China your position is Deputy Director of Tsinghua University's Joint Institute for China-Russia Strategic Cooperation. Please, speak about your responsibilities.

- In fact I am one of the founders of this Institute. Before that I had been working as Deputy Director of the International Center for Technology Transfer for 10 years and I managed to successfully transfer a dozen of technologies and all of them began to be applied in industry – this is my main achievement.

After a long period of practice I had an idea to study the tendencies, mechanisms and prospects of cooperation between China and Russia. After integrating priority resources at the XI meeting of Tsinghua University Council the Institute was established. Nowadays Tsinghua University's Joint Institute for China-Russia Strategic Cooperation supervises research projects carried out together with our Russian colleagues, it is in charge of exchange programs for scientists, and it is developing a strategy of international cooperation with Russian universities as assigned by the Ministry of Science and Technology of China.

- In your opinion, what are the prospects of the collaboration between Tsinghua University and the Polytechnic University?

- Historically, Tsinghua University and the Polytechnic University are quite similar and they have had a good relationship for a long time (Cooperation between the universities dates back to 1949. – Editor’s note). Our universities have signed a strategic partnership agreement, so the prospects are undoubtedly bright especially bearing in mind the fact that cooperation between China and Russia is developing fast at present in many spheres including science and education..

- We have learnt that many of your Russian colleagues call you Liuba. Does it mean you have decided to change your name in order to make it easier for Russian people? What is your attitude to this fact?

- At the foundation Faculty students who had names difficult to pronounce received Russian names similar in their pronunciation. My last name is Liu which sounds like the Russian name Liuba. So it has been my second name for 27 years, and not only Russian but many Chinese colleagues call me like that.

-Could you, please, give three tips to foreigners who are going to study at the Polytechnic University?.

- First of all, the Polytechnic University is famous for its engineering achievements, that is why I advise students to choose future professions in the sphere of engineering, which is sure to make their range of activities really broad in the future. Secondly, it is a good idea to explore the city sights, to familiarize yourselves with the history and culture of this great country and to take part in the numerous events organized by the University – and make sure to do all that with new friends you make in Russia. And finally, do not lose touch with your group mates. Exchange your contact information and try to be in touch as this is certain to be one of your best memories years later.