Investing in the future through establishing cooperation with Spain

In April 2017 the board of the Polytechnic university set off on a visit to Madrid with the purpose of opening the SPbPU Information Center. The busy schedule began on April 19th with a visit to the General Directory of Public Universities of autonomous community of Madrid. Rector of SPbPU, r. A.I. Rudskoy and president of the Public Universities of autonomous community of Madrid discussed cooperation opportunities. “To have the support of the government of Madrid means a lot to us, - stated Mr. Rudskoy, - “We are interested in consolidating partnership in education and science between Spain and Russia, and we seek to mobilize the potential of both our high schools. We see the work with the General Directory and the launch of the Information Center as our major investments into the future”. 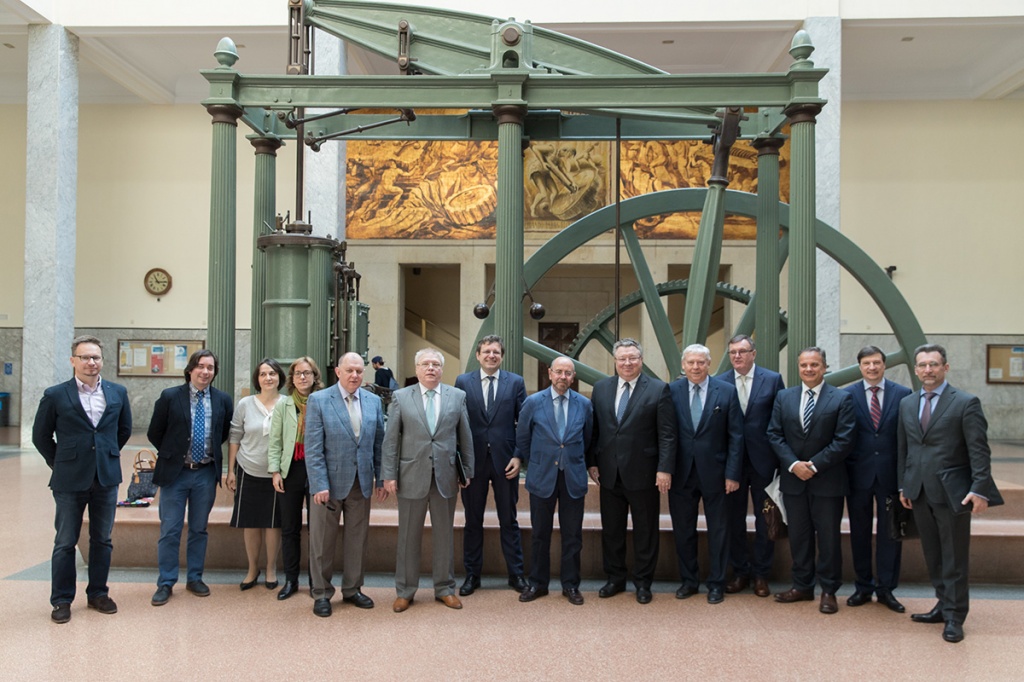 One of the nine partner universities of Polytech in Spain, the Technical University of Madrid (UPM), is known to be the largest technical university in Spain. It will be the official supporter of the SPbPU Information Center. “The SPbPU Days in UPM” were held earlier in April as a token of respect. 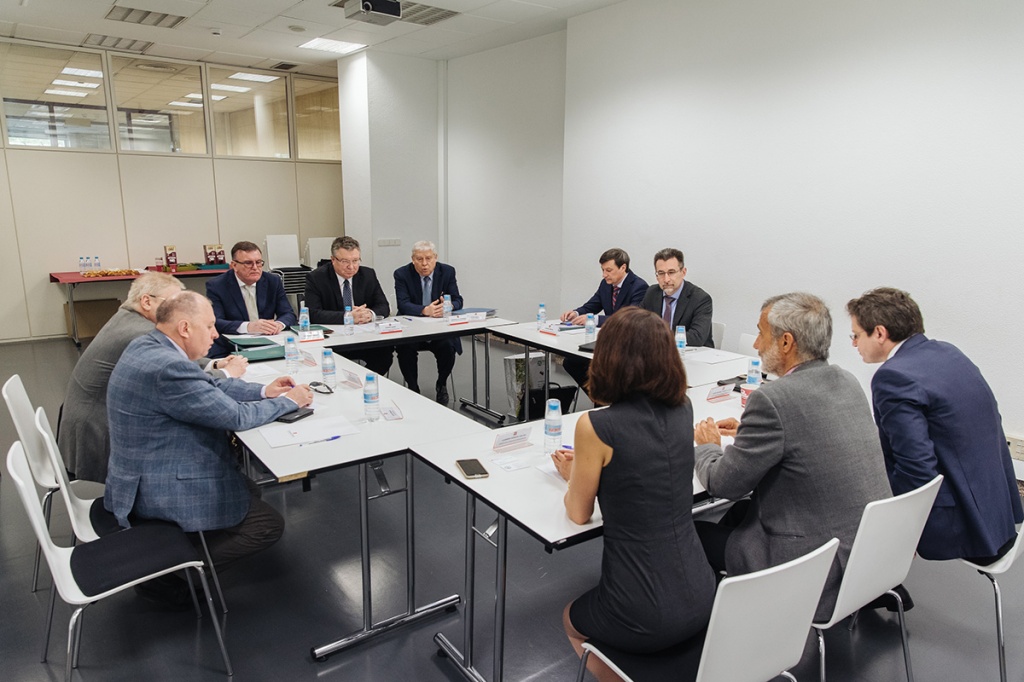 The event included a tour of UPM, during which rector and vice rectors visited the Engineering School, Roads, Canals and Ports Engineering school, and School of Telecommunication Engineering. The tour coincided with negotiations carried out by directors of SPbPU institutes Mr. N.Vatin (ICE) and Mr. S. Makarov (IPNT) and Mr. V. Zaborovsky (ICST) who visited UPM departments and laboratories and discussed potential areas of cooperation including the possibility of joint publication grant applications. The negotiations resulted in the signature of cooperation agreement. 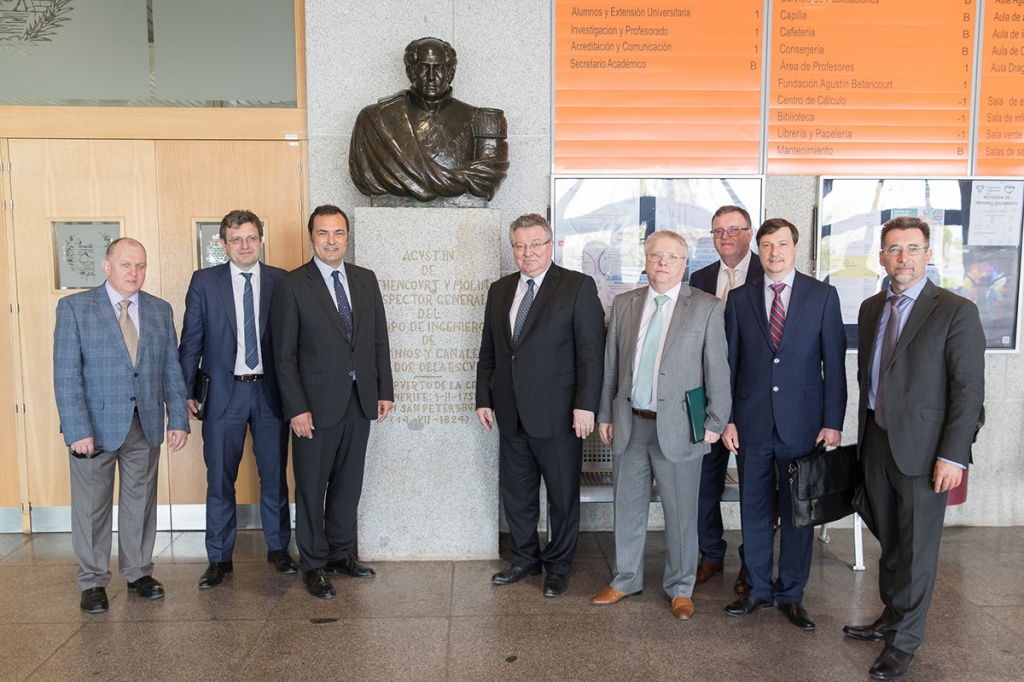 While meeting the SPbPU representatives president of UPM Mr. Guillermo Cisneros expressed his appreciation for the visit of such a high-ranking delegation and hope for the fruitful cooperation between teaching staff of the two universities. 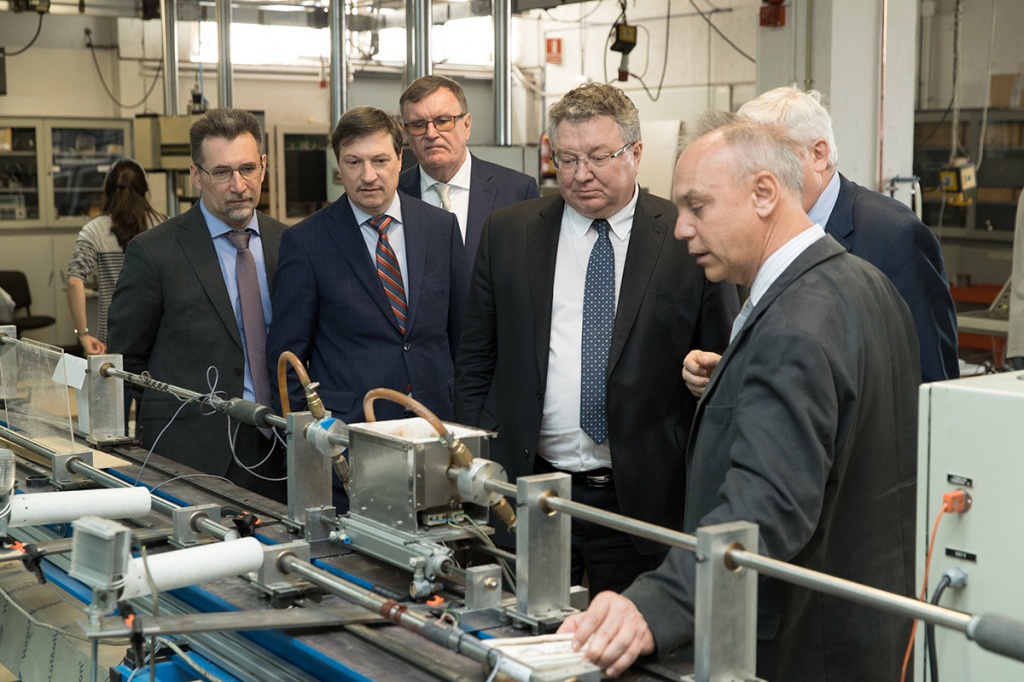 The parties then renewed the cooperation agreement between the universities (the previous one was signed in April, 2011). The agreement covers cooperation in joint science and pedagogical activity in industrial and civil engineering, optoelectronics, computer technologies, robotics, etc. The agreement also encourages cooperation in education, such as student participation in Summer schools organized by SPbPU and UPM. 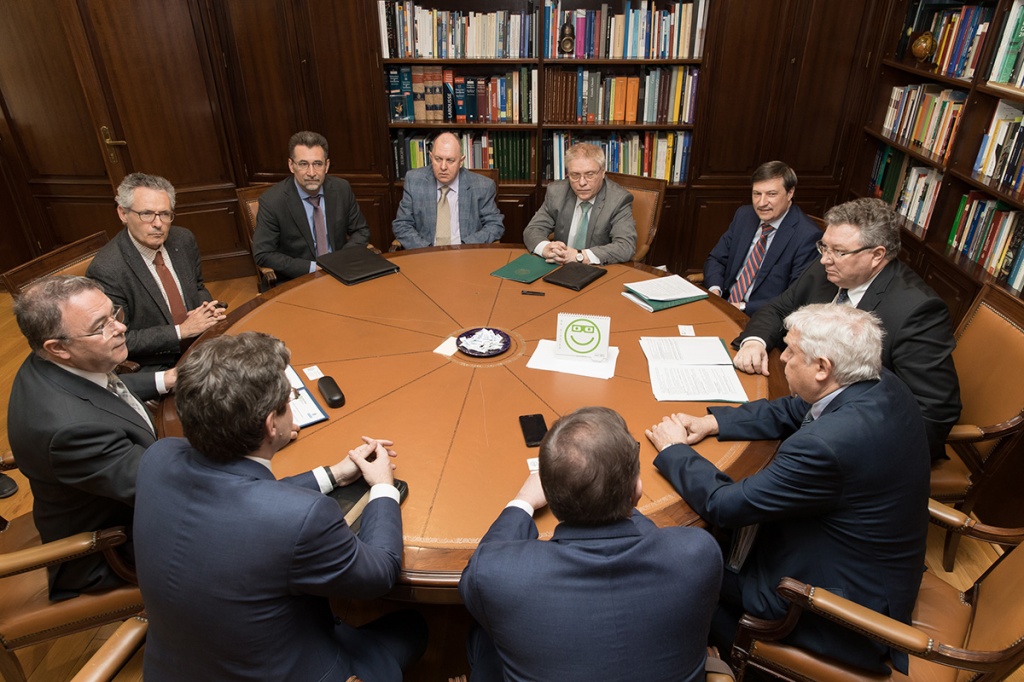 Besides the boards of the two universities, the event was attended by the secretary of the Russian Embassy in the Kingdom of Spain Mr. S. Bondarenko, head of the representative office of Rossotrudnichestvo in Spain Mr. E. Sokolov, president of the “Alexander Pushkin” foundation Mr. A. Chernosvitov, president of the International public foundation for culture and education Mr. G. Popov, and other honorable guests. 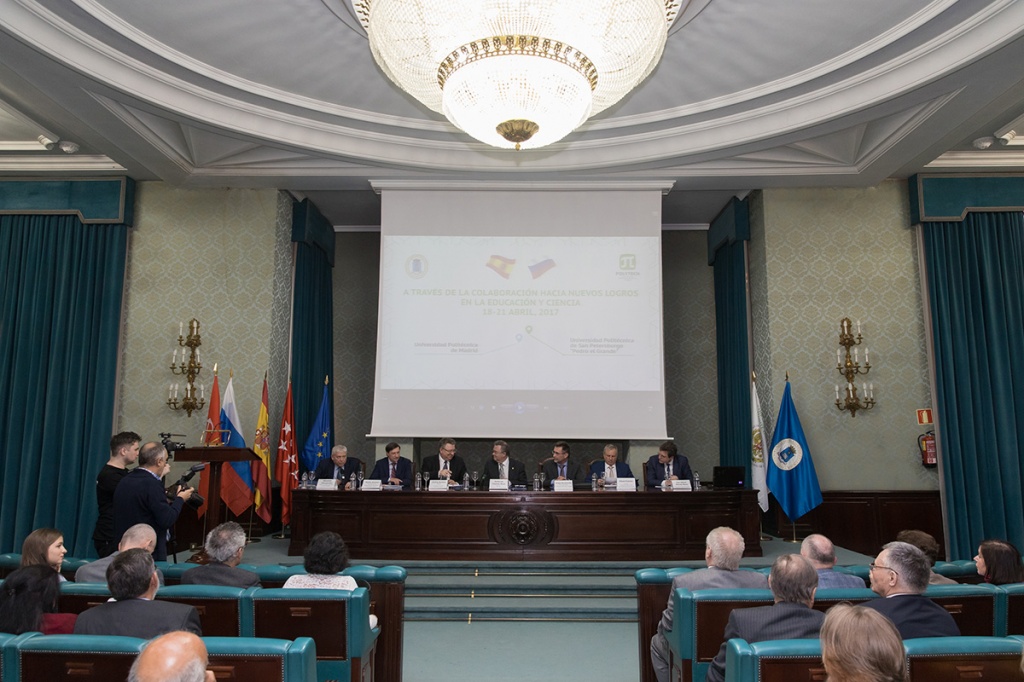 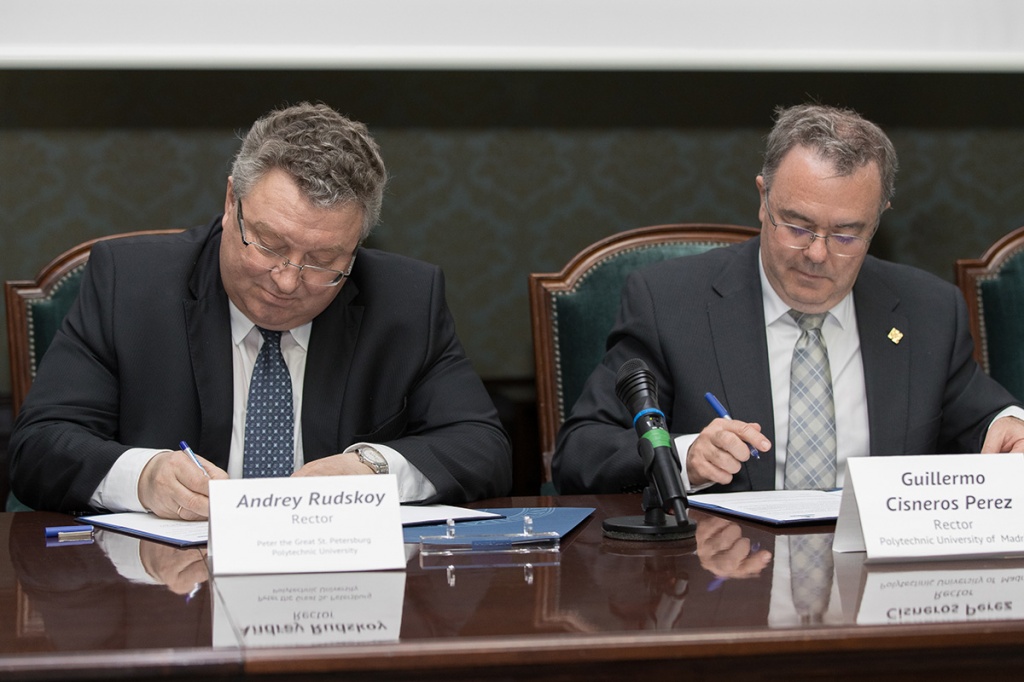 “SPbPU Days in Madrid” were also marked with the opening of an exhibition displaying 29 works of the SPbPU students from “Engineering graphics and design” department. The exhibition also included information boards designed by the Institute of Civil Engineering, the Institute of Physics, Nanotechnology and Telecommunication and the Institute of Computer Science and Technology. Being one of the leading Russian universities SPbPU availed itself of the opportunity to present the degree programs, Summer and Winter Schools, short-term exchange programs and double degree programs. 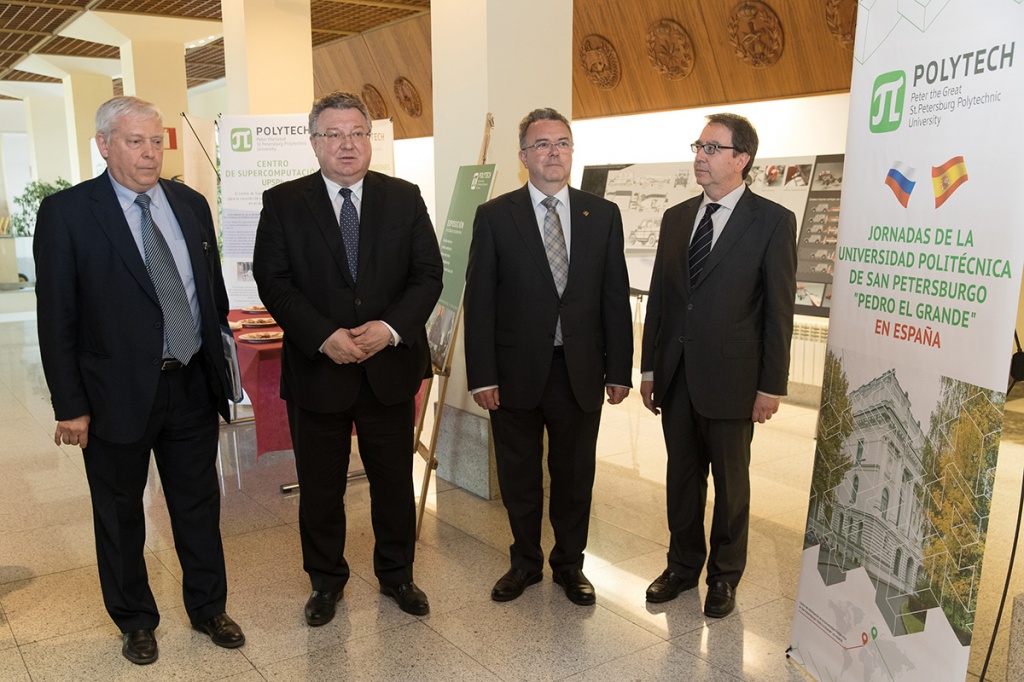