The 20th international students’ festival “Golden Autumn” in the Polytechnic University turned out to be a fantastic celebration, an unforgettable evening for all the participants and numerous spectators. The contestants competed in three nominations: vocal, dance and instrumental music. The assessment criteria of performers included bright national color, vocal talent, selected material, level of artistic taste and originality of performance. 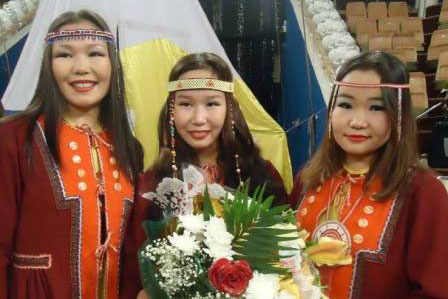 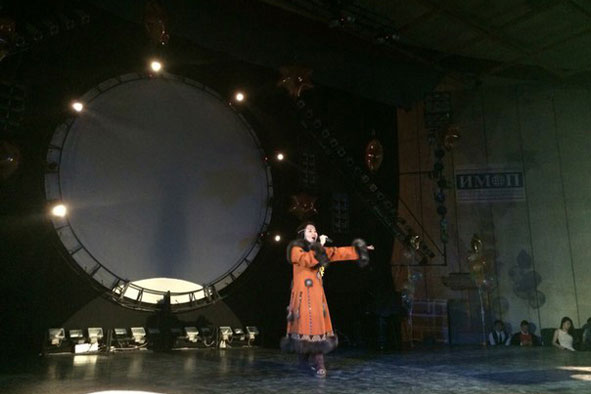 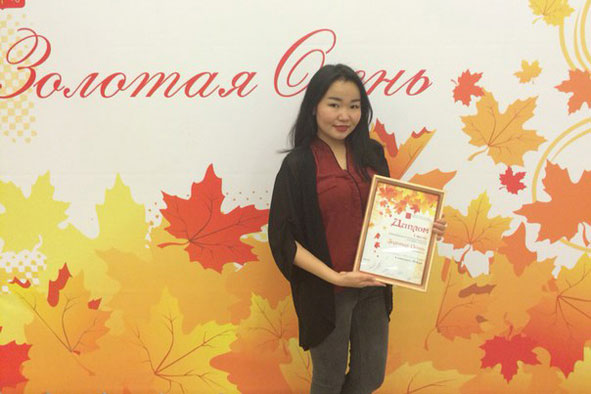 Each participant of the festive event became a real discovery for the jury. “The most important thing is that throughout many years we have managed to maintain an atmosphere of kind relationship and friendship between representatives of different nations. It is important at all times and it will always unite people,” noted the ideological mastermind of the festival “Golden Autumn”, Vice-Rector for International Affairs of the Polytechnic University, D.G. Arseniev.

No doubt, creative work is a unique opportunity to tell others about one’s own country and let light into the world. How to do this through a song will be explained by the winner in the nomination “Vocal” – Raktyna Tymkyl. She arrived from Yakutia only recently, but has already managed to become popular with the audience thanks to her sincere manner of singing and endless love to her home – austere northern land where each day is believed to be God’s blessing.

- Raktyna, please, tell us about yourself. Does your family help you in your creative activities?

- I was born in the Republic of Sakha (Yakutia), in a small village called Chersky. My clan belongs to an ancient nation of the north-eastern Siberia – Yukagirs. Our descendents lived in tundra (rus. Arctic prairie) and were called Vaduls. That had something to do with their specific ways of farm management and survival in harsh conditions. My folk have always encouraged and helped me develop my vocal abilities. My mother, Anastasia Afanasievna Kurilova is a peace envoy, an artist of the state ensemble of the Republic of Sakha called “Seed’e”, teacher of additional education and head of the family folklore ensemble “Ierpeyedie”, which means the “Sun”. This year our family ensemble celebrated its 20th anniversary.

- Has St. Petersburg become your native city? What helps you unlock your creative potential here?

- I like the city on the Neva River very much. It is absolutely different from the place where I grew up, but the energy of St. Petersburg fascinates and invigorates me. I came here to study in the Institute of Far North Nations of Herzen University. I made a lot of friends in St. Petersburg. I met many of them through the folklore theatre and studio of “Severnoye Siyanie” (rus.: Polar Lights) in our educational institution. I am grateful to the heads of “Severnoye Siyanie” for their high grade of my creative activities and recommendations for participating in the festival “Golden Autumn”.

- Did you believe that you would win in the festival “Golden Autumn”?

- Participation in the festival is a vein and a unique opportunity to meet interesting and open-hearted people. I believe in fate and power of thoughts. Ability to sing from your heart is a gift that should be given to everyone. When I appeared at the stage I instantly knew that both the audience and the jury were supporting me (smiling). The organizers of the event gave all the participants the feeling of happiness and creative flight. The festival made us understand that all people are children of the world. In every song, every dance, every play on a musical instrument should live just most kind feelings. I would like to express my genuine gratitude to everyone who ensures that the festival “Golden Autumn” is held annually. In gratitude to you I give you PEACE in my songs.

- Who helped you select the song for the festival? What impressed the audience and jury in your manner of singing?

- The song “Birds are leaving” is our family song. Mother entrusted me with this song and blessed for participation in the contest. I think the jury were impressed with my ability to sing in the traditional Chuckotka way – ability to reproduce powerful and unusual sounds, imitating various Arctic animals, wind, mountain brooks and rustling leaves. Moreover, every my performance is accompanied with interesting dancing elements, many of which I invent myself.

- What can you say about other contestants?

- I would like to point out their high professional level and hardworking, ability to smile at the audience and share their mood. A lot of items were presented by the Polytechnic University students. I really enjoyed this concert, met a lot of like-minded people and learnt more about the cultures of different countries. It is very important for a creative person, who is in constant search for unusual ideas.

- Do you remember your first performances? What is your concert life like today? ?

- There were so many of them (laughing)! My first victory was participation in the children’s contest “Baby Shlyager” in Yakutsk. When I was at school I won the competition “Young Spring” in the town of Neryungri.

In 2014 I took part in the Festival of National Cultures of the North, Siberia and Far East Peoples, which took place in Herzen University. In 2015 our family ensemble appeared with a concert program on the “Day of Indigenous Groups Association of the North, Siberia and Far East of the Russian Federation”. We also appeared at the 10th All-Russian Festival “Camping Ground of the North”. As far back I was a member of the folklore theatre and studio “Severnoye Siyanie” I sang popular songs at the youth festival of St. Petersburg called “Ethnopicnic”. Today my success is the students’ international festival “Golden Autumn”, which has become my special experience and great achievement. And tomorrow… There will be a new story! (smiling)

- What does music mean to you? Tell us about your source of inspiration.

- Music for me is the heart of Yukagir people, polar lights and even dark night… But with stars in the sky. It is bird singing early in the morning and mother’s lullaby. My source of inspiration is my motherland. The wildlife of Yakutia is picturesque forests, rivers and lakes, rare types of animals. I am happy every moment I spend at home. And when I sing songs in northern tongues, I imagine the places that I am so much fond of. It is necessary to convey the atmosphere of the harsh but very beautiful land to the audience.

- Do you have any wishes to the contestants of the festival “Golden Autumn”?

- I wish you may have love, good luck, peace and harmony in your creative activities. I am sure that you will succeed. And the most important thing – always remember about your motherland and it will definitely help you in everything you do!

Brought to you by the Department of International Cooperation