On July 10 Peter the Great St. Petersburg Polytechnic University carried out a solemn ceremony to present the gown and diploma of SPbPU Honorary Doctor to the President of Leibniz University Hannover (LUH) Professor Volker EPPING. 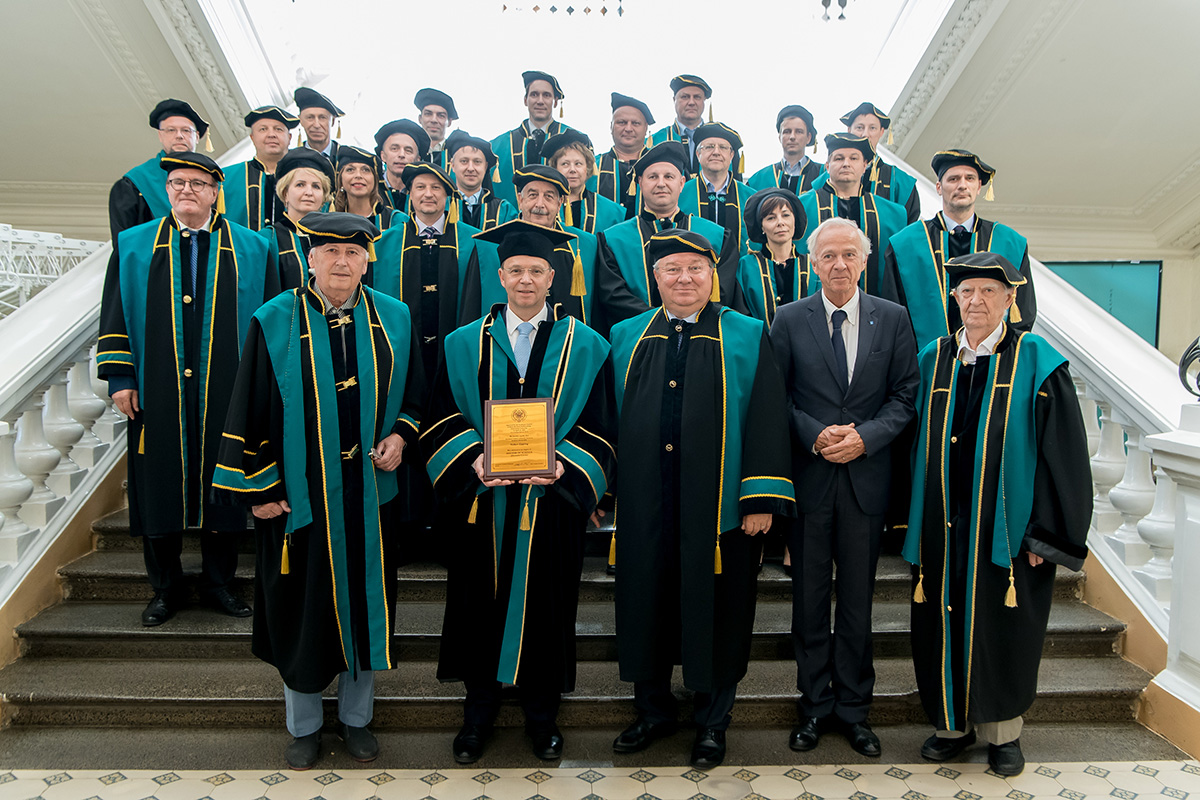 SPbPU Rector, Academician of the RAS Andrei RUDSKOI welcomed the colleagues from Leibniz University Hannover, President and his spouse Mrs. Michaela RÖHRBEIN and his long-time friend - the previous LUH President, Professor Erich BARKE with his spouse Mrs. Heidemarie Inge Erika BARKE. He said that he was particularly pleased to present the Diploma of SPbPU Honorary Doctor in the presence of such a representative delegation. “Academicians Yury VASILIEV and Mikhail FYODOROV, previous leaders of the Polytechnic University are also here today,” commented SPbPU Rector. - It is nice that this tradition of respecting the older generation is alive. I believe that this also brings institutions together. ” 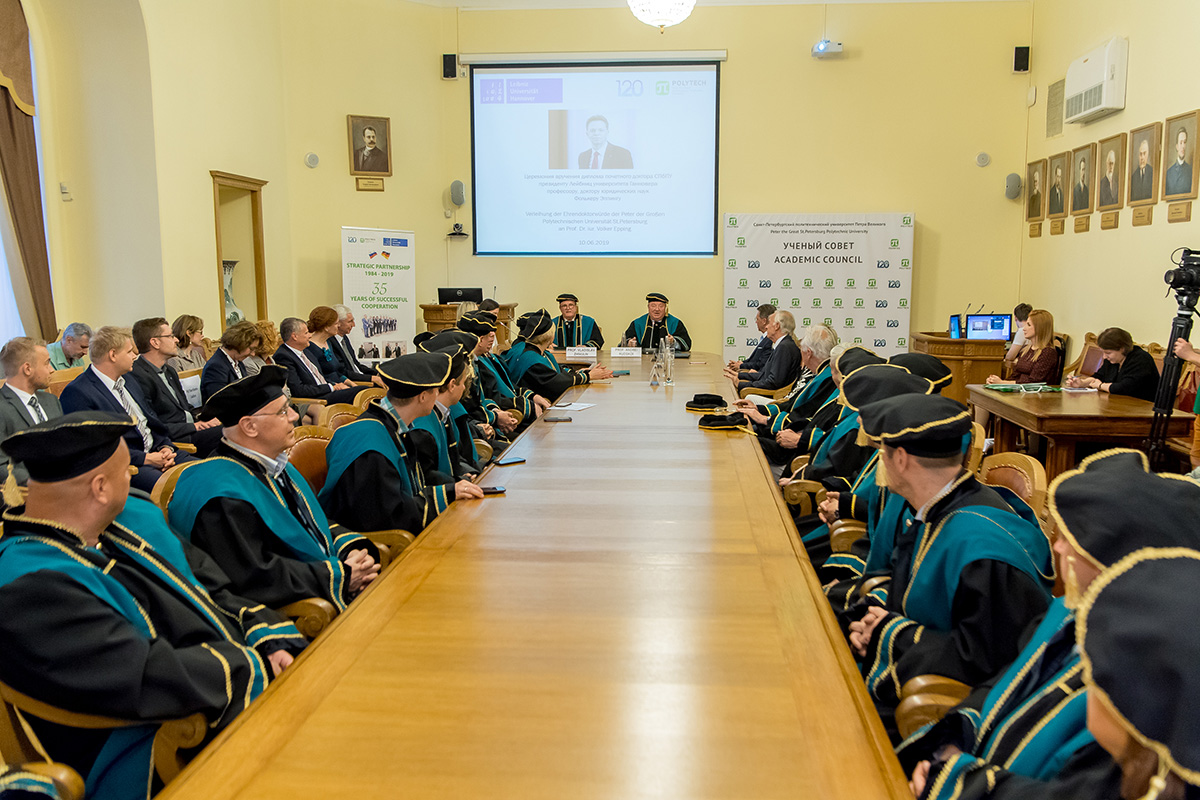 Andrei RUDSKOI noted that the ceremony of awarding the title to Professor Volker EPPING is a natural result of many years of fruitful cooperation between SPbPU and LUH and his work aimed at developing this cooperation. Currently, our universities are cooperating in 14 key scientific and technological areas. Under the leadership of Volker EPPING, the strategic partnership program between SPbPU and LUH was developed. Cooperation program was supported by DAAD as one of the best partnership practices of not only Russian and European universities, but as well the universities around the world. During the presidency of Professor Volker EPPING Leibniz University Hannover began to play a key role among SPbPU strategic partners. 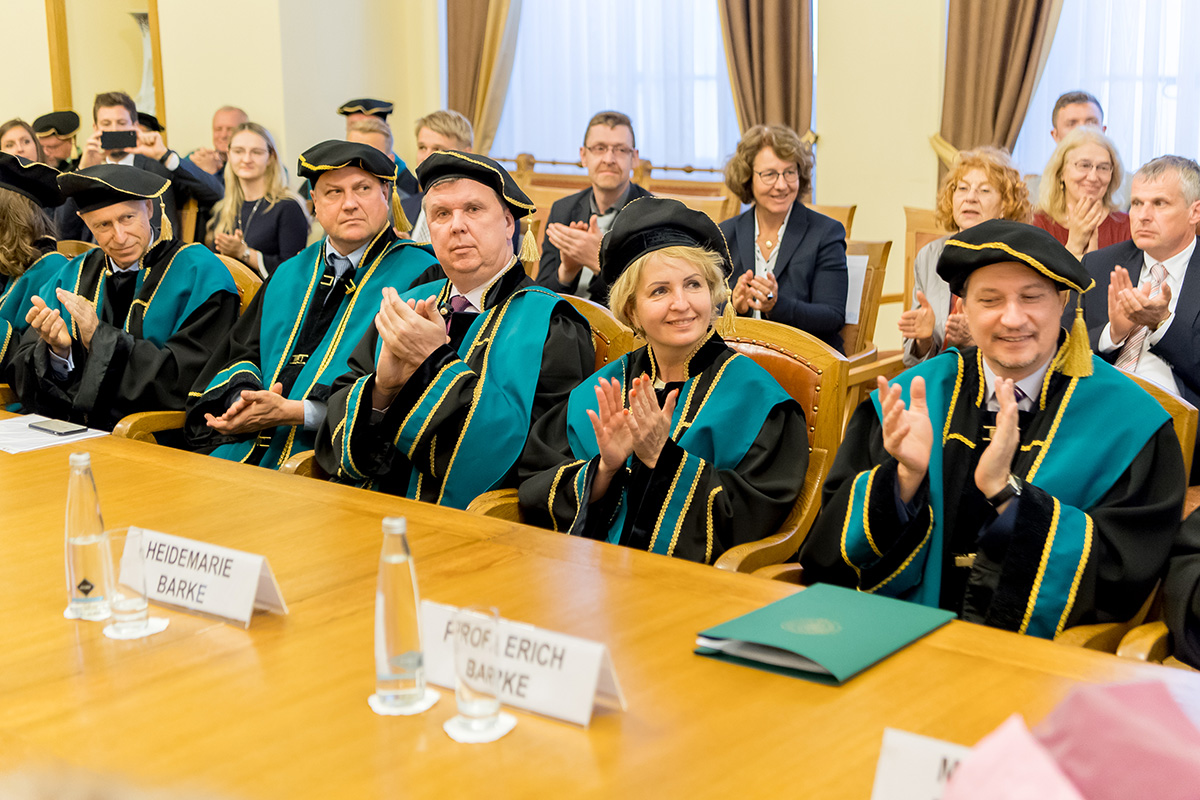 According to SPbPU Regulations on Honorary Doctorate the title “SPbPU Honorary Doctor” is awarded to prominent leaders of science, education and culture, as well as prominent specialists from Russia and foreign countries for significant contribution to the development of advanced areas of knowledge and science, facilitating the strategic development of the university, expanding the areas of SPbPU cooperation and increasing its position at the international level. SPbPU Academic Council made a unanimous decision at the meeting in April 2019 to award the title to Professor Volker EPPING. 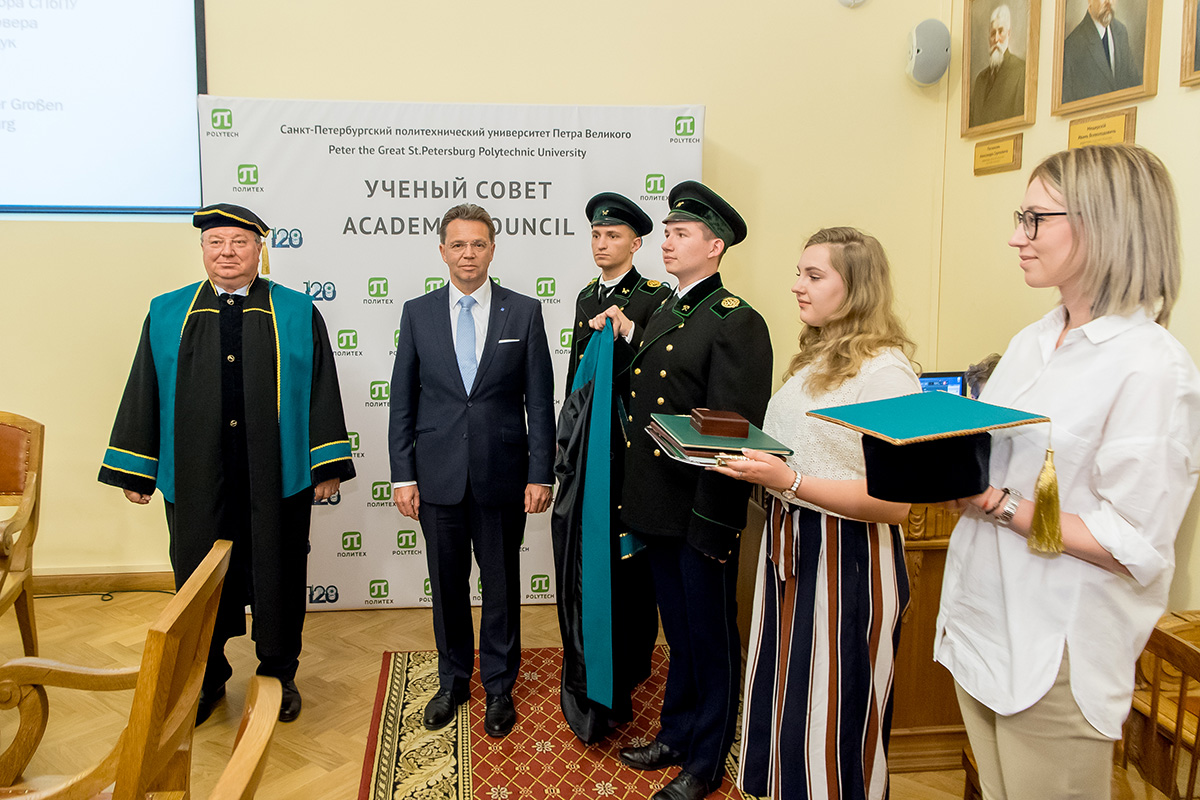 Making an introduction SPbPU Vice-Rector for International Relations Dmitry ARSENIEV underlined that Volker EPPING, being a leading expert in the field of jurisprudence in the field of public and international law, devoted his life to serving the community, science and education. “His academic experience has played an important role in the development of Leibniz University Hannover as one of the leading universities in Germany,” noted Dmitry ARSENIEV. – Paying much attention to the development of the internationalization of education, Professor EPPING encourages interdisciplinary research and the development of international cooperation. As a leading scientist in the field of jurisprudence, he focuses his attention on the problem of the availability of high quality education for all citizens, being an expert on this issue in the European education system. ” 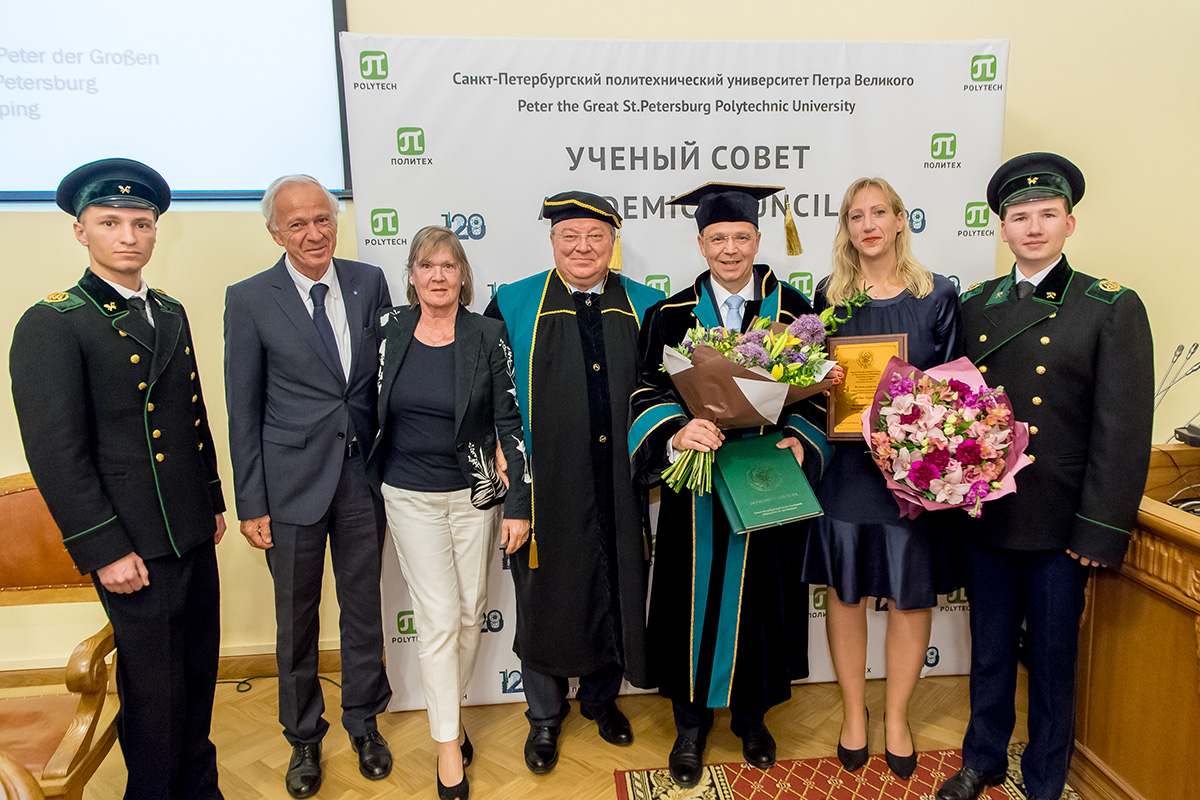 Professor Volker EPPING was awarded a gown, a medal and a diploma. In honour of the Honorary Doctor of Peter the Great St. Petersburg Polytechnic University the University youth choir “Polyhymnia” performed the “Gaudeamus” anthem.

Professor EPPING underlined that celebrating the 35th anniversary of cooperation between our universities “we can be proud of our cooperation unique and successful development. Communicating with the staff of our university, I was again and again convinced of how intense, comprehensive, and fruitful cooperation with SPbPU has been,” noted the President of Leibniz University Hannover. “On the basis of our long-standing relations new partnership projects appear, requiring strong technological competencies and economic ties. This means a great deal in the 21st century because education and research will be the key to economic prosperity. ” 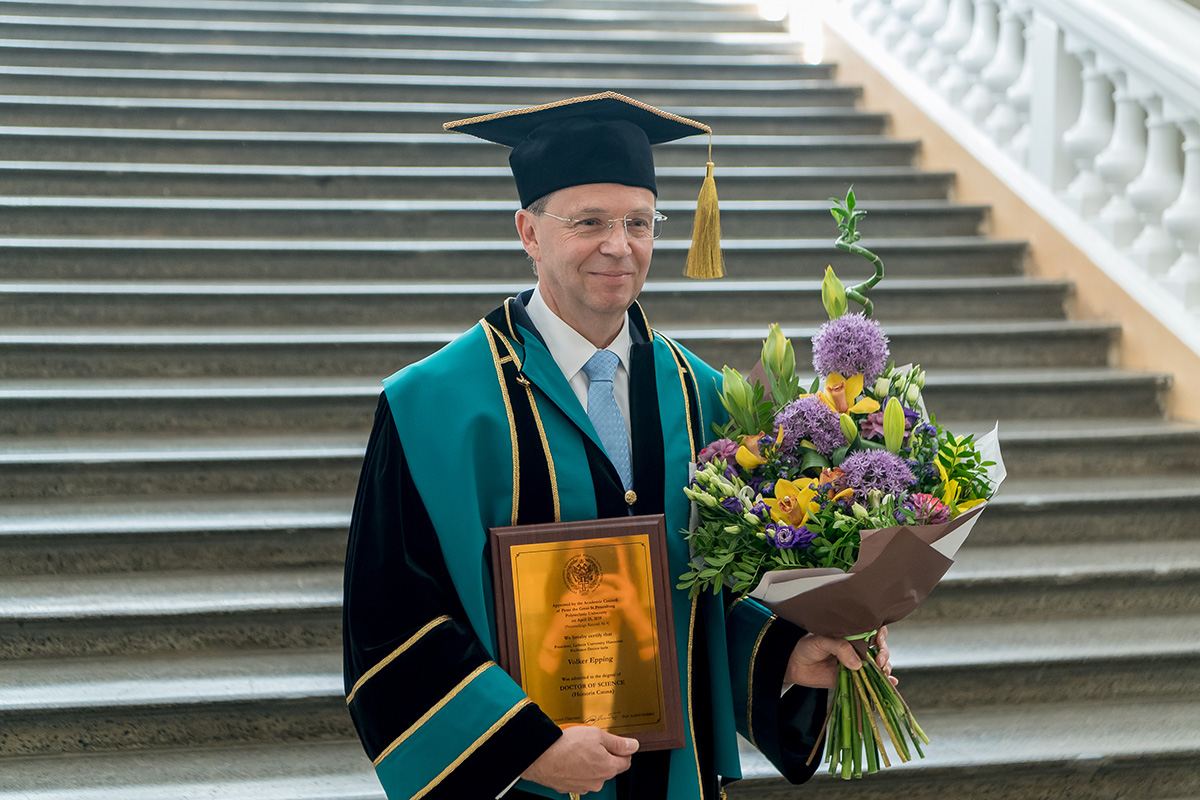 Relations between universities, according to Professor EPPING, are not limited to student exchanges, cooperation between scientists working on joint research projects – it is also personal friendships. “Exchange at different levels is not limited to science,” continued Professor Volker EPPING. - Each of us learns about the language, history, culture and worldview of each other. We know a lot of new things, expand hour horizons, make new acquaintances that strengthen and maintain trusting relationships. So, step by step, we will carry out our cooperation. ”

Professor EPPING expressed his gratitude for awarding the title of SPbPU Honorary Doctor and admitted that he considers it to be a sign of personal solidarity and good relations, as well as a sign of trust, including the future enhancement of relations between our universities.

The material was prepared by the SPbPU Media Center. Text by Inna PLATOVA