A meeting with Chinese partners

Peter the Great St. Petersburg Polytechnic University is striving to establish a close cooperation with Chinese universities. The first month of the new academic year was rich in events for the international offices and departments of the Polytechnic University, namely conferences, meetings and agreements signed with foreign partners. One of such events was a meeting of the representatives of our University with a delegation from Beijing University of Civil Engineering and Architecture that took place at the Supply Center for International Activity of SPbPU in late September. 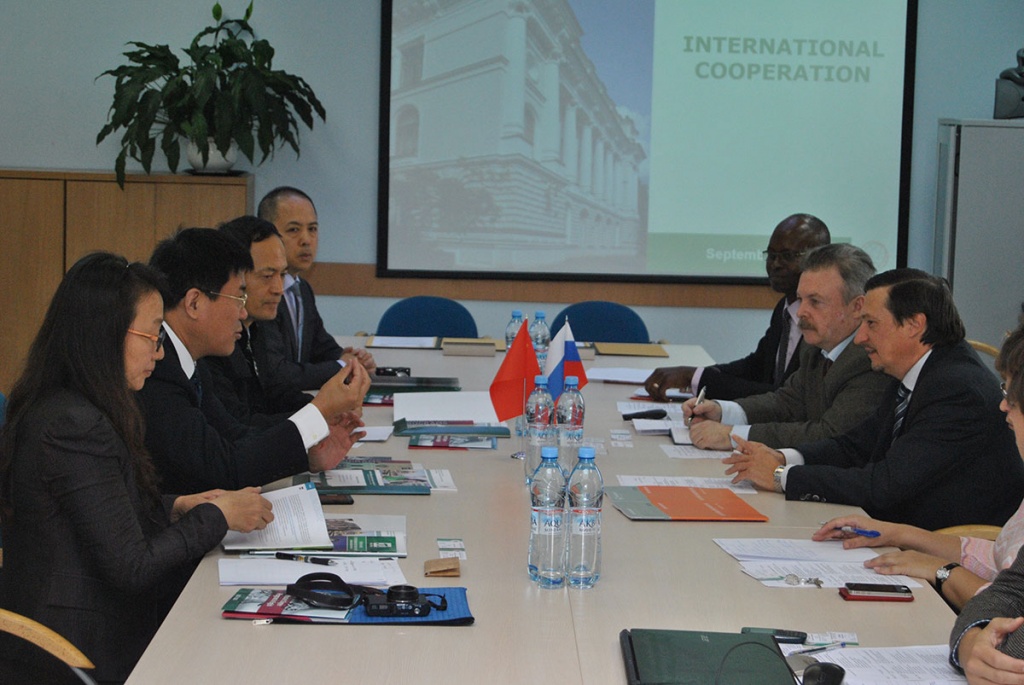 The meeting was aimed at signing a memorandum of understanding. At the beginning of the event D.G. Arseniev, Vice-Rector for International Relations, made a speech. “Chinese universities are strategic partners of the Polytechnic University. This week we have received four delegations from China and we are very happy to see here our colleagues from Beijing University of Civil Engineering and Architecture. We hope that this visit will become a first stage of our productive collaboration”, said D.G. Arseniev.

Wang Jiang Zhung, the head of the delegation spoke about a friendly relationship between both countries and their willingness to pursue similar goals. The main aspect for Chinese specialists is borrowing Russian experience in the sphere of advanced technologies applied in civil engineering and architecture. “There are more than 13,000 students at our University. Many of them would like to study at the Polytechnic University. Chinese lecturers and scientists are eager to cooperate with their Russian colleagues. We have the necessary facilities to bring to life daring experiments and carry out fundamental research”, explained Wang Jiang Zhung. It is worth mentioning that Beijing University has ties with numerous foreign universities, and takes an active part in academic and student exchange programs inviting well-known scientists from the USA, Great Britain and Germany to deliver lectures. 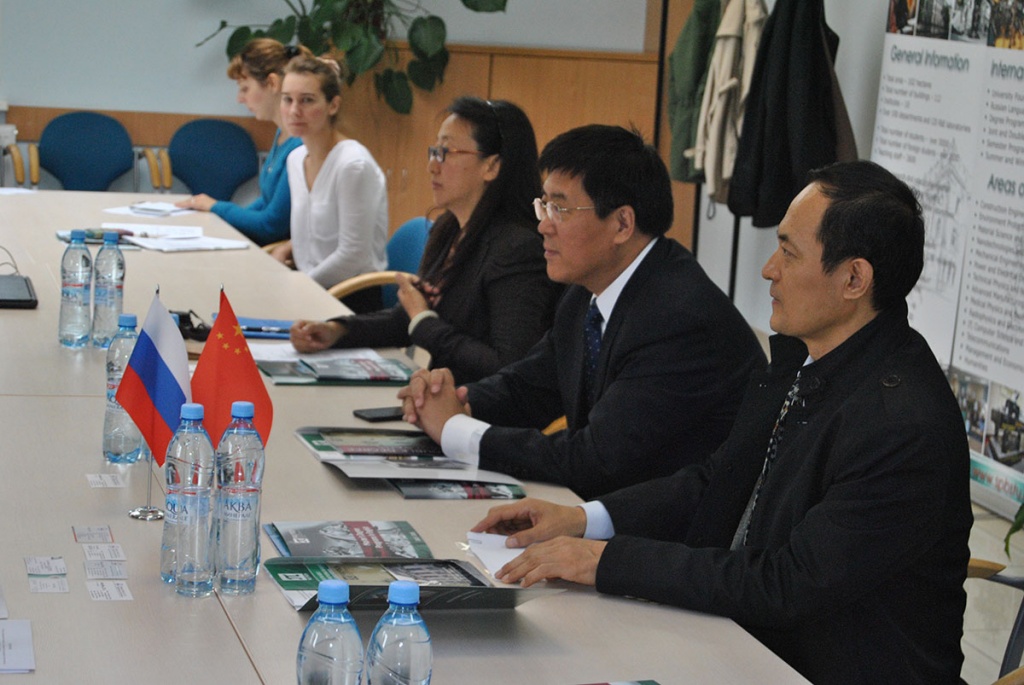 The memorandum was signed in a solemn atmosphere, after that the parties not only shook hands, but also congratulated each other heartily. During the meeting the issue of joint academic grants was also discussed. The initiative of running projects in Russia and China is supported by the government. “Indeed, we are interested in real cooperation. We have more than 300 agreements with different universities worldwide. We pay a great attention to academic mobility. Exchange programs for students and lecturers is one of the key areas of cooperation with our foreign partners”, said V.D. Khizhnyak, Director of the International Relations Office. 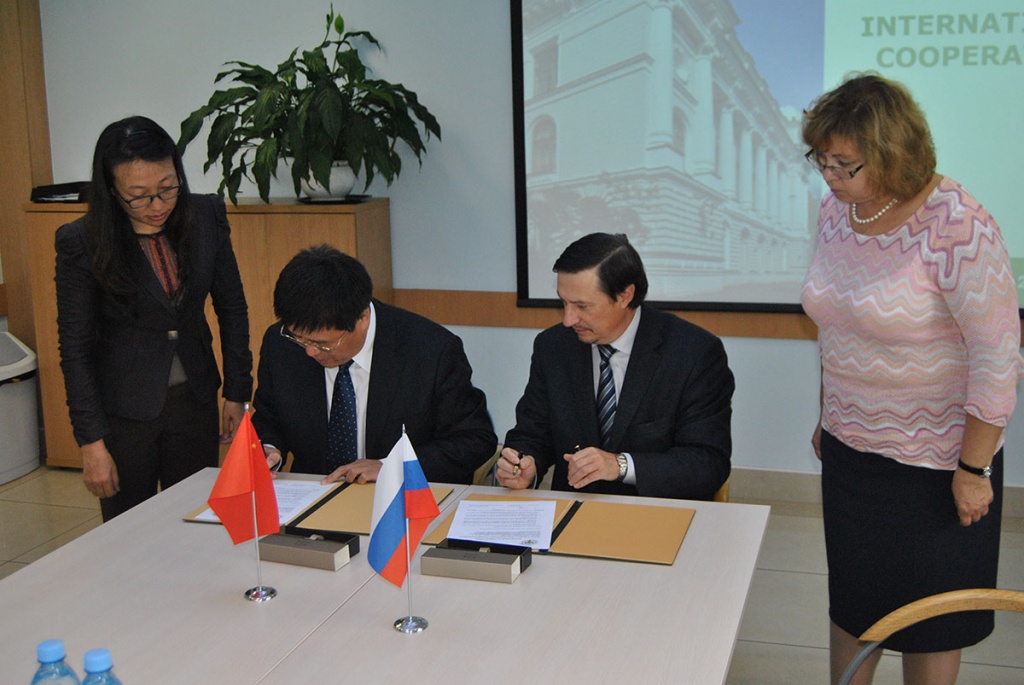 The meeting ended with presentations of educational programs of SPbPU, cooperation programs concerning international postgraduate courses, the Institute of Applied Mathematics and Mechanics and the Institute of Civil Engineering.

The representatives of Beijing University of Civil Engineering and Architecture demonstrated a great interest in the issues connected with teaching foreign students at SPbPU. Taking part in winter and summer schools is a great opportunity to “try on” a university, to adapt to a new environment and to choose a major. Bachelor’s and master’s degree programs in English help a lot of students to enroll. In addition, it is possible to study the Russian language at a special foundation faculty in order to be able to continue education in Russia.

The specialists of the Institute of Applied Mathematics and Mechanics spoke about the process of working out scientific solutions that can be applied in the construction industry. Their professional experience lies in mathematic modeling of structures and many other methods. An example of their expertise is their participation in the project for designing the ventilation and air-conditioning system for St. Isaac’s Cathedral in Saint-Petersburg. Qi Chengzhi, Director of the Institute of Civil and Transport Engineering, highly appreciated the presentations made by his Russian colleagues. He explained that Chinese developers are involved in numerous joint projects, being tough competitors on the international market.

During the meeting at the Institute of Applied Mathematics and Mechanics the parties agreed to draw a list of Professors and their contacts who are supposed to be responsible for academic advising for students and exchange programs for master’s degree and postgraduate students. Before long a student from Beijing University of Civil Engineering and Architecture will be invited to take part in the international master’s degree program called “Mechanics of Continuous Mediums”.

The Chinese delegation was shown around SPbPU and it also went on an excursion to the Center for Technical Creativity for Young People (FabLab Polytechnic).