On February 10, two months after taking the office, the Consul General of the Federal Republic of Germany in St. Petersburg Stefano WEINBERGER visited the Polytechnic University.

It is important to note that, the acquaintance of the German diplomatic mission with polytechnics took place on the Russian Diplomatic Worker's Day. As well as Stefano WEINBERGER, the Deputy Head of Economics Department Dirk Zirpka visited SPbPU. 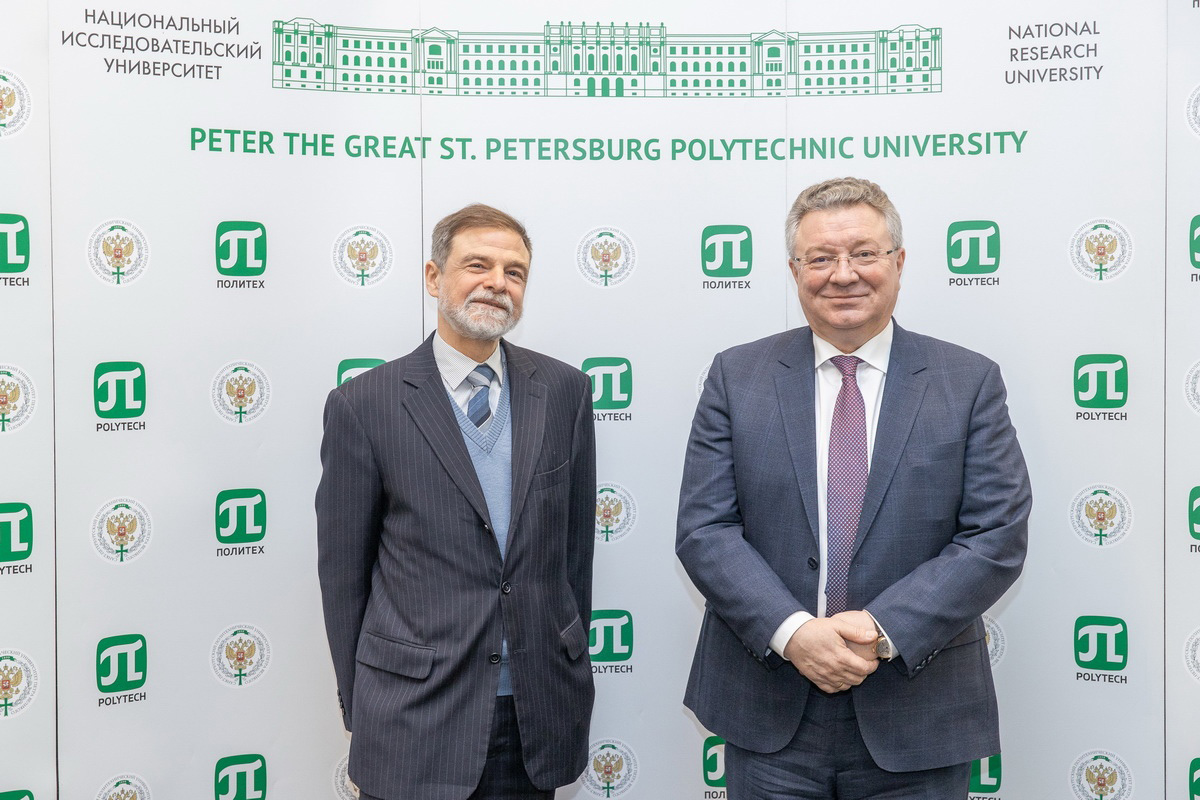 “It is a great honor for us that you made one of your first visits to educational organizations to the Polytechnic University,” SPbPU Rector Andrei Rudskoi emphasized. - For us, cooperation with Germany has a long and creative history. I am pleased to note that, despite the coronavirus pandemic, international cooperation continues”.

During the negotiations, Andrei RUDSKOI presented the details of these long-term ties to the honored guest. To begin with, when the Polytech was being built, the equipment of many laboratories was purchased from Germany. And the first five years after the opening, classes were conducted in three languages: Russian, German and English.

In the 1950s, a new era of cooperation between the Polytechnic University and Germany began. And now it is one of the most important areas of SPbPU's international activities. The Rector said that partnerships have been established with more than 60 universities in Germany, several of which are SPbPU strategic partners. Leibniz University Hannover (LUH) was the first university in West Germany with which the Polytech signed a partnership agreement. In 2019, we celebrated 35 years of our cooperation. A joint project of SPbPU with Leibniz University of Hannover under the Strategic Partnership Program of the German Academic Exchange Service DAAD (2013-2018) won among 117 applications and received support of one million euros. This strategic partnership project has been recognized by DAAD as one of the best university cooperation practices. 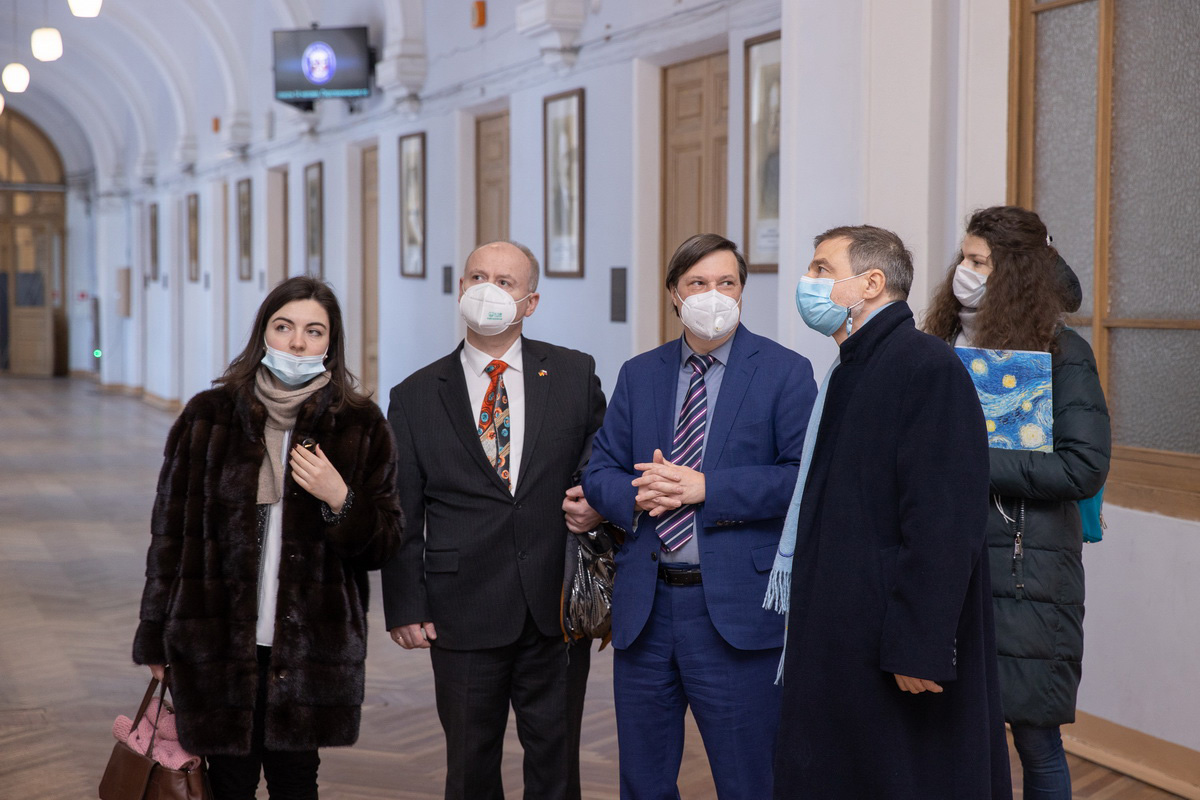 Last year, a joint project with TU Berlin “Sustainable Development as the Basis for Strategic Partnerships” won in the category “Interuniversity Partnerships” in the competition “Russia and Germany: Scientific and Educational Bridges”, organized by the Ministry of Foreign Affairs of the Russian Federation, the Federal Ministry of Foreign Affairs of the Federal Republic of Germany with the support of the Ministry of Science and higher education of the Russian Federation.

“SPbPU has been regularly taking part in bilateral competitions to support joint research conducted by the Russian Foundation for Basic Research and the German Research Society (RFBR and DFG), the Russian Science Foundation (RSF) and DFG,” Andrei RUDSKOI noted. - Over the past five years, SPbPU scientific groups have submitted more than 20 applications for joint research projects with partner universities from Germany. Three projects were supported (mathematical modeling in hydrodynamics, materials research, and biotechnology)”. 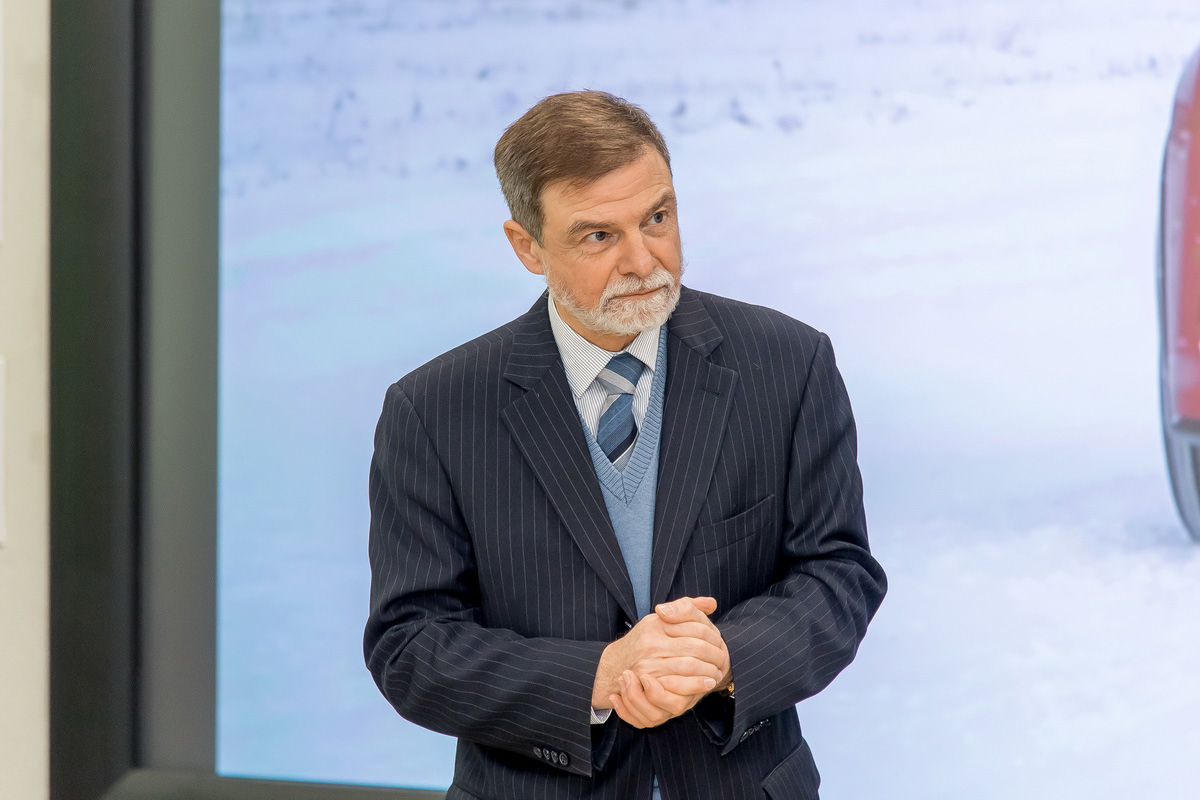 “In addition, we work with the German Academic Exchange Service DAAD,” added the Rector of the Polytechnic Institute. - A large volume of student mobility with German partners is supported by DAAD programs - talented students of SPbPU receive scholarships every year”.

Andrei RUDSKOI spoke about the joint structures created by SPbPU with partner universities from Germany (the Consul General visited some of them), and about cooperation with industrial enterprises.

“One of the main industrial partners of SPbPU in Germany is Siemens, we train specialists for this company, and these are high-level personnel,” the Polytech Rector assured. - The partnership began in 2001, Polytech and Siemens are conducting special research and development projects in different fields”. 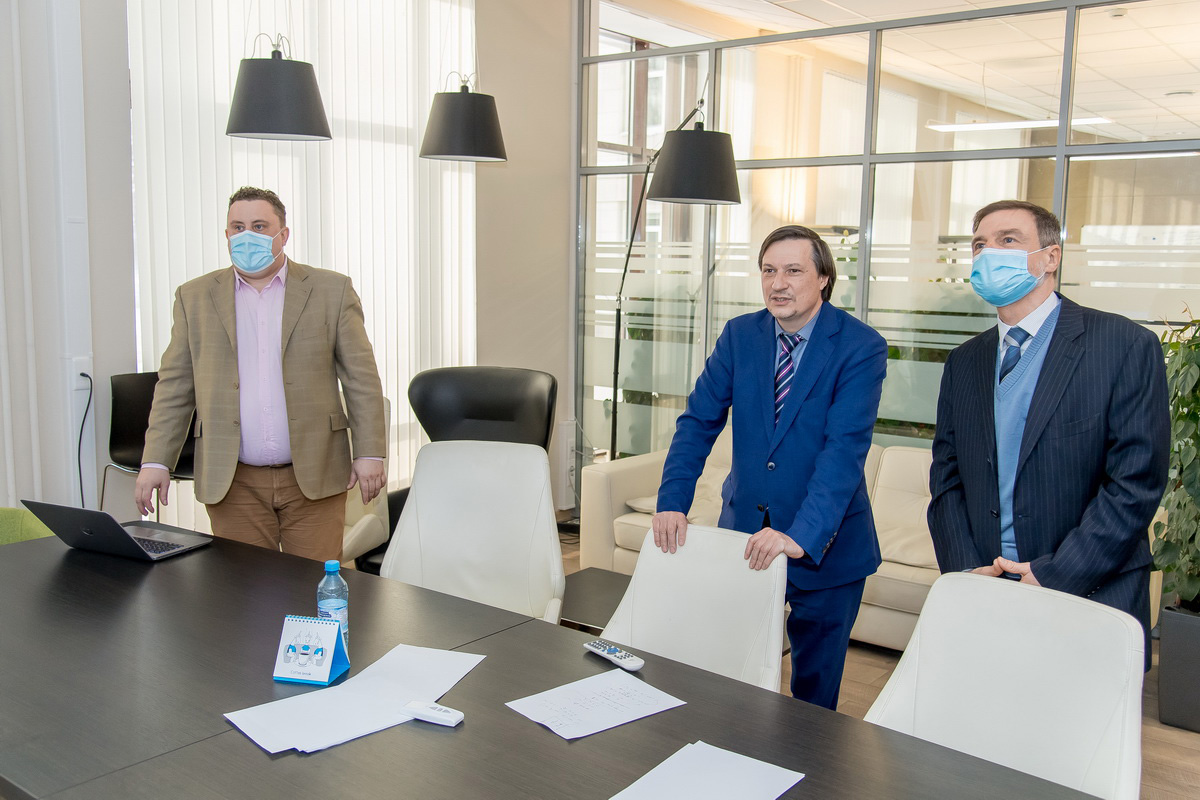 Andrei Rudskoi emphasized, that cooperation with Germany is multifaceted and is far from limited to academic exchanges, scientific collaborations and educational projects. Polytechnic University contributes to strengthening public relations and humanitarian ties between our countries. So, SPbPU was the organizer and active participant of several events within the framework of the Russian-German Year of Scientific and Educational Partnerships 2018-2020. The most striking of them were: a two-day Forum "Polytech Days in Berlin", a victory in the Russian-German competition "Russia and Germany: Scientific and Educational Bridges" together with TU Berlin, events within the framework of the annual German Week in St. Petersburg.

“We are very serious about international cooperation in general, and Germany is the leader of this cooperation in the European part of the continent,” SPbPU Rector summed up.

Consul General expressed his gratitude to SPbPU Rector for representing such a wide range of scientific, educational and industrial relations of the Polytechnic University with universities and companies in Germany.

“Cooperation of the Polytechnic University at such a level, with such intensity and duration can be considered to be a worthy example of Russian-German interaction. I am very glad that you are cooperating with the German scientific, industrial and educational community, as well as with us, the Consulate General, for example, in the framework of events such as the German Week in St. Petersburg,” Mr. WEINBERGER said.

During a tour to the research building “Technopolis Polytech”, the delegation of the German Consulate General visited the NTI SPbU Competence Center "New manufacturing technologies", the Supercomputer Center, the joint International Polytech - Siemens Research Center, the Center for Open Education and the Laboratory of Light Materials and Constructions. 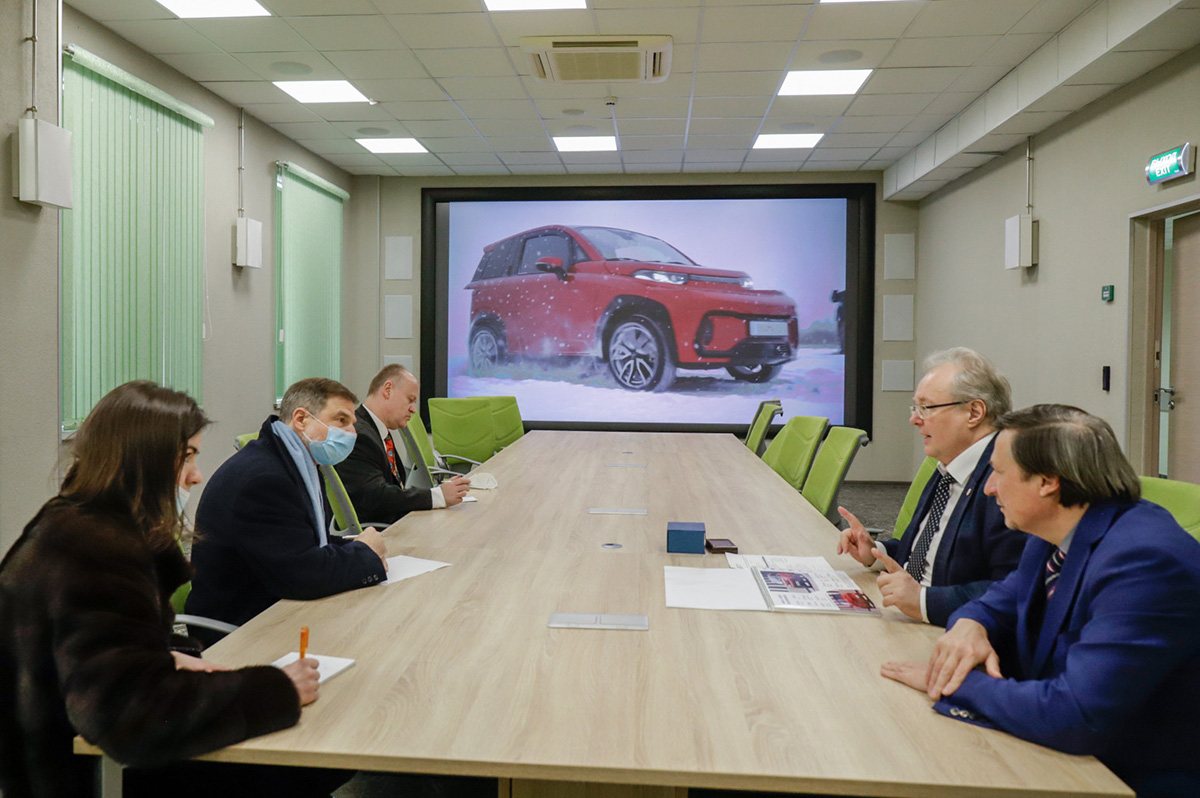 SPbPU Vice-Rector for Innovative Projects, Head of the World-Class Research Center "Advanced Digital Technologies" and the NTI SPbU Competence Center "New manufacturing technologies", Head of the "Computer Engineering Center" (CompMechLab®) Alexey BOROVKOV presented a project to create an electric vehicle "KAMA-1", developed on the basis of digital twin technology. Aleksey BOROVKOV emphasized that the pre-production model of the electric vehicle was developed from the very beginning and without the predecessor internal combustion engine in the shortest possible time according to the automotive industry standards - in just 2 years. The Vice-Rector shared his plans for the further implementation of the project: “In 2021, maximum preparation will be carried out for the launch of serial production of electric vehicles. In fact, the Polytechnic University acts as a developer of new competitive products in world markets and thereby forms the electric transport market in Russia”.

Developed by NTI SPbPU Competence Center "New manufacturing technologies" employees instruments of Smart Design & Engeneering class allowed to carry out all the necessary virtual tests, simulate and virtually measure any technical characteristics of the product throughout the entire life cycle, demonstrate compliance with the requirements of the Technical Regulations of the Customs Union, harmonized with the requirements of the Rules of the United Nations Economic Commission for Europe within the framework of the KAMA-1 project.

The Consul General expressed his gratitude to SPbPU Vice-Rector for Innovative Projects for a bright and informative presentation and expressed his appreciation of the innovative development and key technologies underlying its creation. “I wish you every success in this project. I was glad to learn a lot about breakthrough technologies at the Peter the Great St. Petersburg Polytechnic University! ”- Stefano WEINBERGER noted. 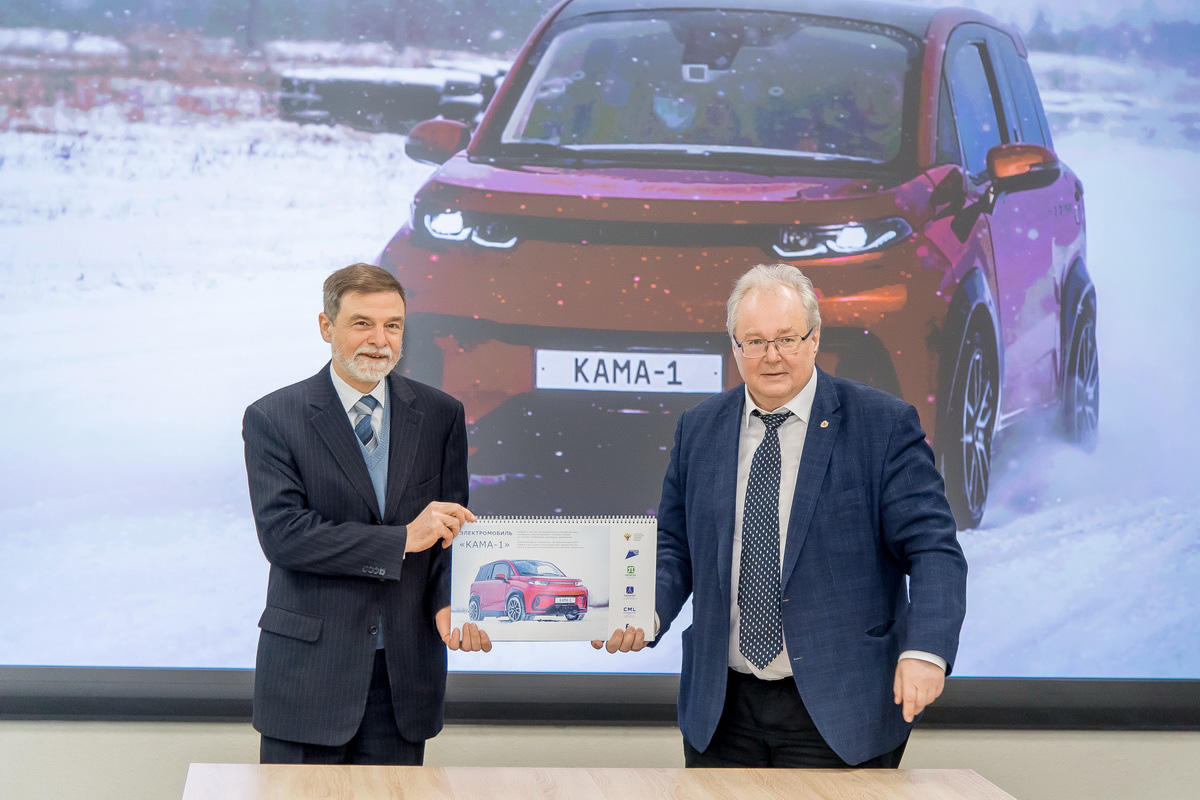 Upon completion of the negotiations, SPbPU Rector expressed the hope that after the final stabilization of the epidemiological situation in St. Petersburg, the German Consul General could visit the Polytechnic University again to meet with the student community. “The doors of the Polytechnic University are always open for our friends. I sincerely wish that our relations with Germany continue to develop as productively, dynamically and for the common welfare of our countries, ” Andrei RUDSKOI underlined. In turn, Stefano WEINBERGER thanked SPbPU Rector for the warm welcome, and confirmed his desire to support the Polytech's initiatives for cooperation with Germany.