On February 18, foreign partners congratulated Polytechnic University on its birthday. On the eve of the big holiday dedicated to the 120th anniversary of the Polytechnic, more than 40 delegations from almost 20 countries - not just partners but true friends - came to the university. 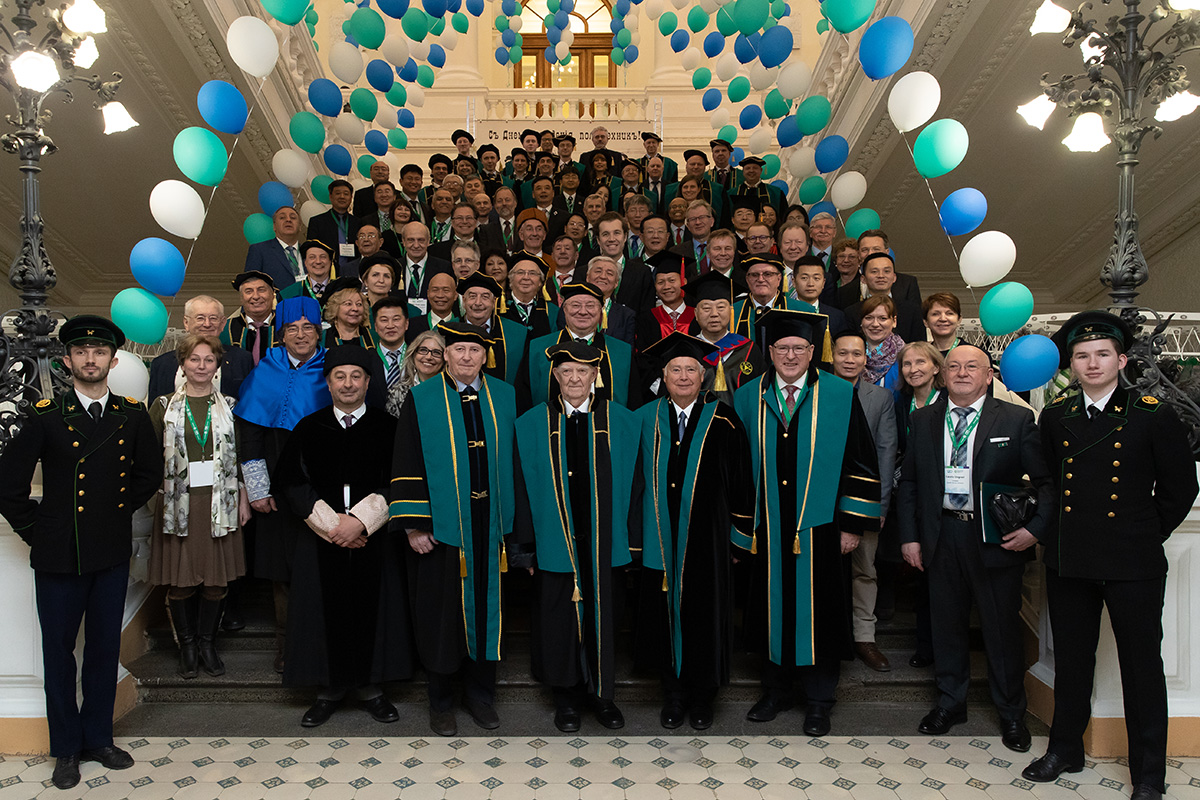 Polytechnic University has been open to international cooperation since its very inception. In the early years, partners from many European countries provided invaluable assistance in the development of our university. First students from other countries appeared at our institution yet in 1902, and teaching here was performed in Russian, German, and English. On the eve of the festivities, one could hear people speaking foreign languages in all Polytechnic buildings: from the early morning, representatives of various universities and companies from all parts of the world had been greeting our university.

Rector of SPbPU, Academician of the RAS A.I. RUDSKOI was greeting the guests. He had more than 20 meetings to address all delegations representing institutions and companies the university is developing scientific, educational, and industrial partnership with. SPbPU President Academician of the RAS Mikhail FYODOROV and Vice Rector for Research Vitaliy SERGEEV were also greeting the guests. 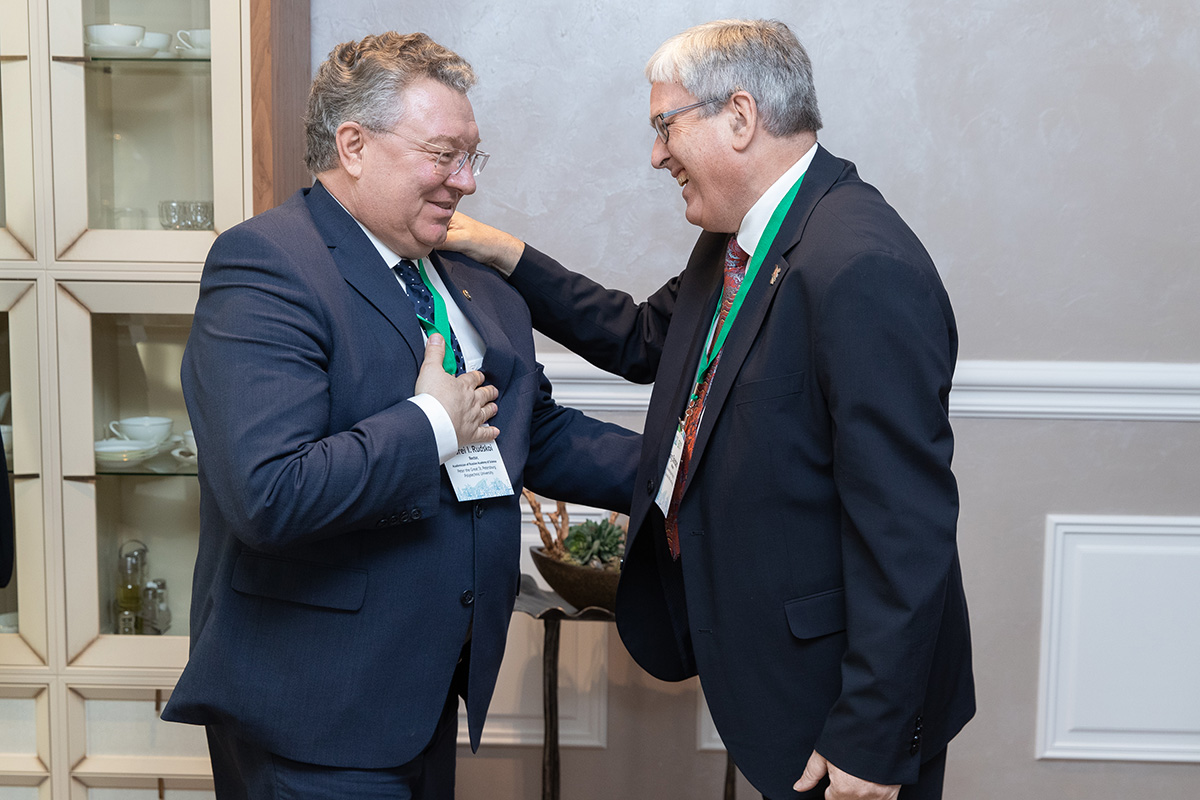 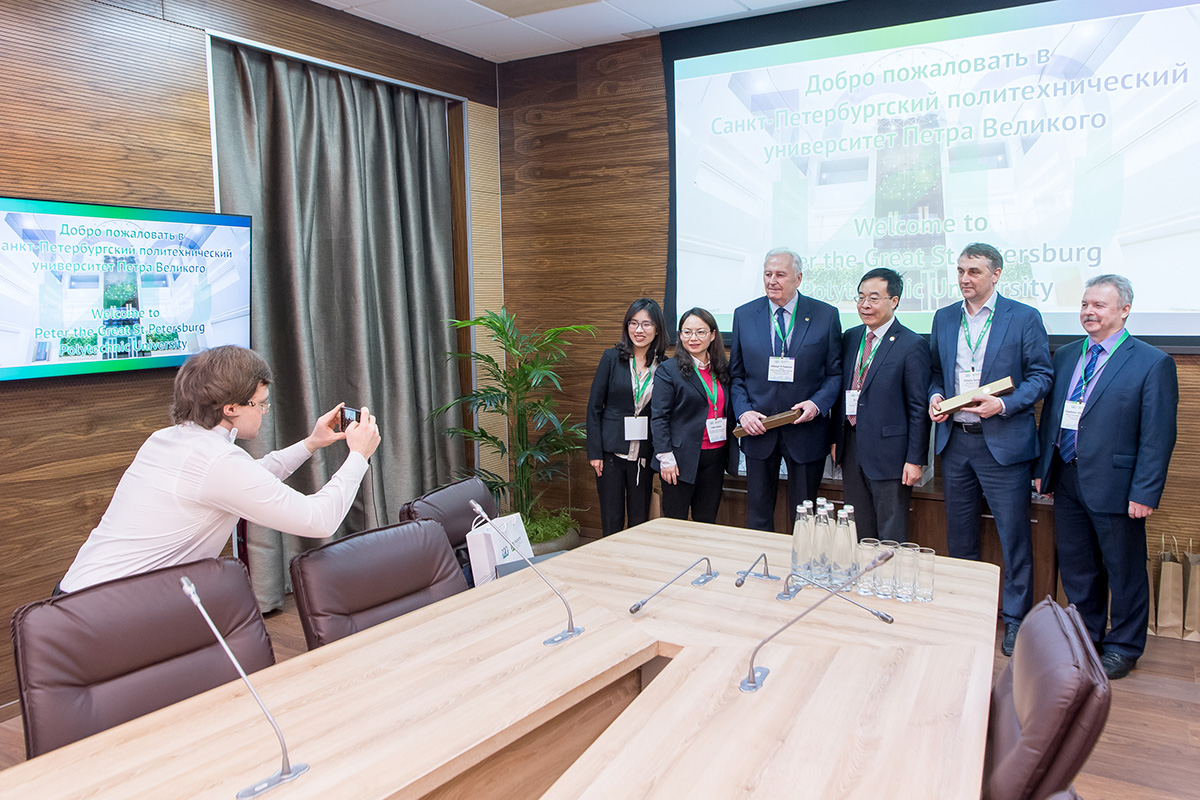 Polytechnic University has many strategic partners among German universities. An essential role in expanding educational and scientific cooperation with this country belongs to the German Academic Exchange Service (DAAD). By the way, quite recently, two long-standing strategic partners, Polytechnic University and Leibniz Universität Hannover, summed up the results of their joint project of many years within the framework of the DAAD “Strategic Partnership” Program. 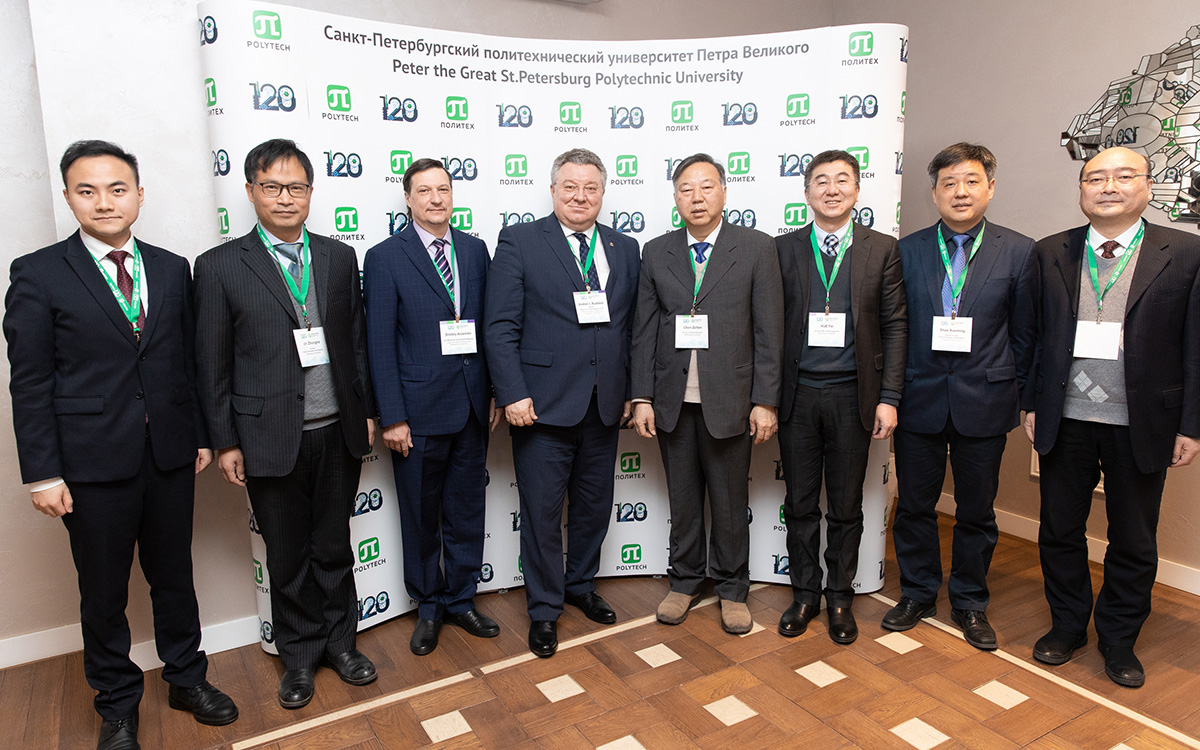 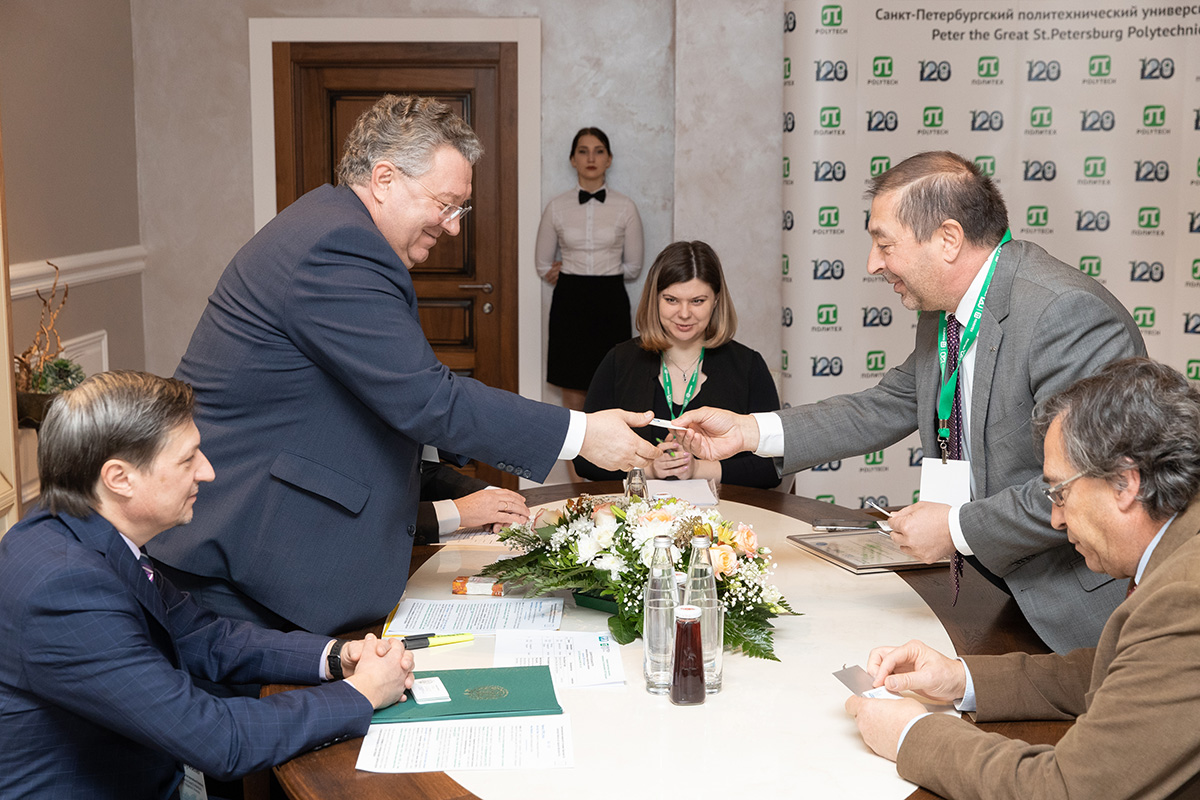 “We have the feeling that we are in our own university: we see friendly and familiar faces all around us,” delegations from the brotherly countries of Kazakhstan and Kyrgyzstan commented on their visit to Polytechnic University. Our countries are united by our common scientific schools, rich traditions and history, and, most essential, our desire to keep on with and expand our cooperation. Delegations from Montana University Leoben (Austria), Polytechnic University of Catalonia (Spain), ParisTech network (France), Jiangsu Normal University (PRC), Binh Duong University (Vietnam) and many others congratulated the University and made plans for future cooperation.

One of the key principles of Polytechnic University is teaching through practical training, and for this reason, collaboration with industrial companies is in the focus of university’s attention. Today, our industrial partners, world leaders in science and technology, came to congratulate the University: Kawasaki Robotics and Robovizard, Festo Holding GmbH, Airbus, Siemens AG, ENV. “One can reach best results through perfecting not only the educational base but also the technical one. We are training our specialists in exactly this way; they are demanded on the market, and we help companies to develop their R&D potential,” the rector said. 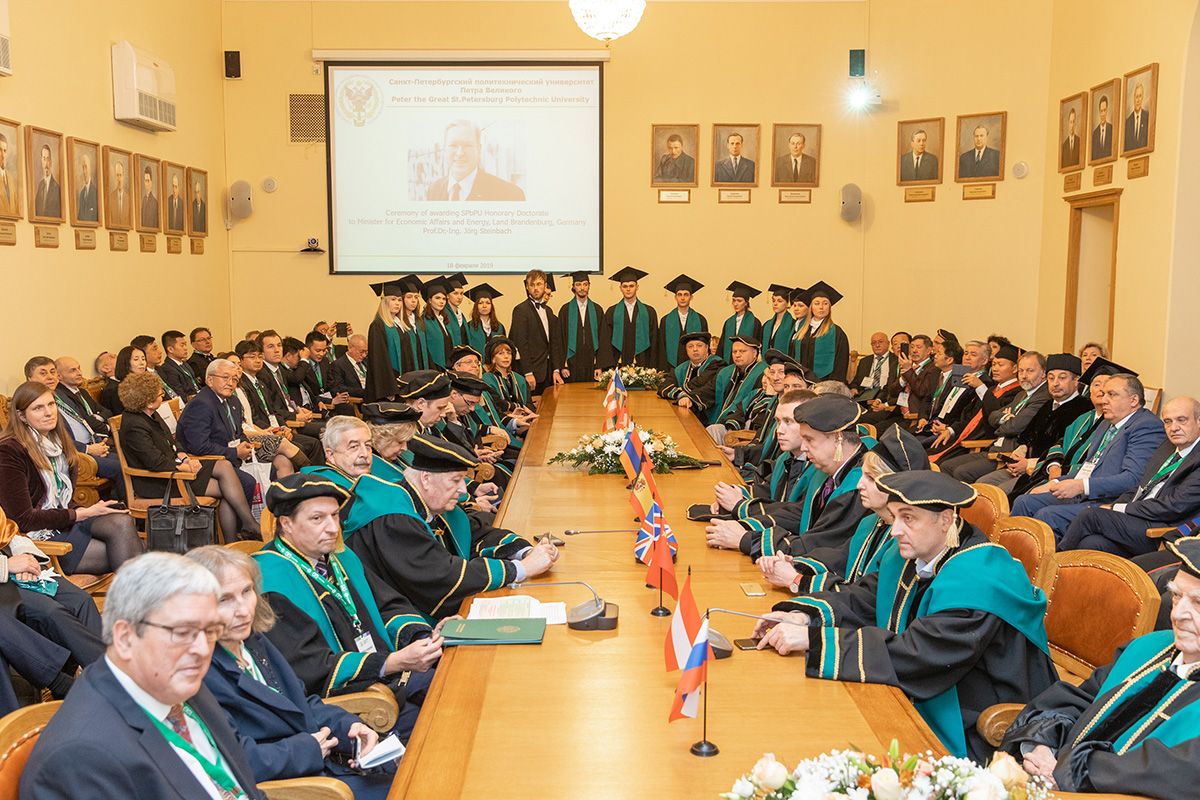 After personal contacts with the rector and president of Polytechnic University, the guests moved from the Research Building to the Main Building, where a ceremonial meeting of the SPbPU Academic Council Presidium and delegations from foreign universities took place. “Polytechnic University has been developing and strengthening its relations with foreign partners for more than a century; decades of real friendship are tying us with many of them,” SPbPU Rector Andrey RUDSKOI opened the meeting with these words. It is a matter of honor and pride for our Academic Council Presidium to hold this session dedicated to the 120th anniversary of our University together with our friends from leading universities and companies from all over the world. 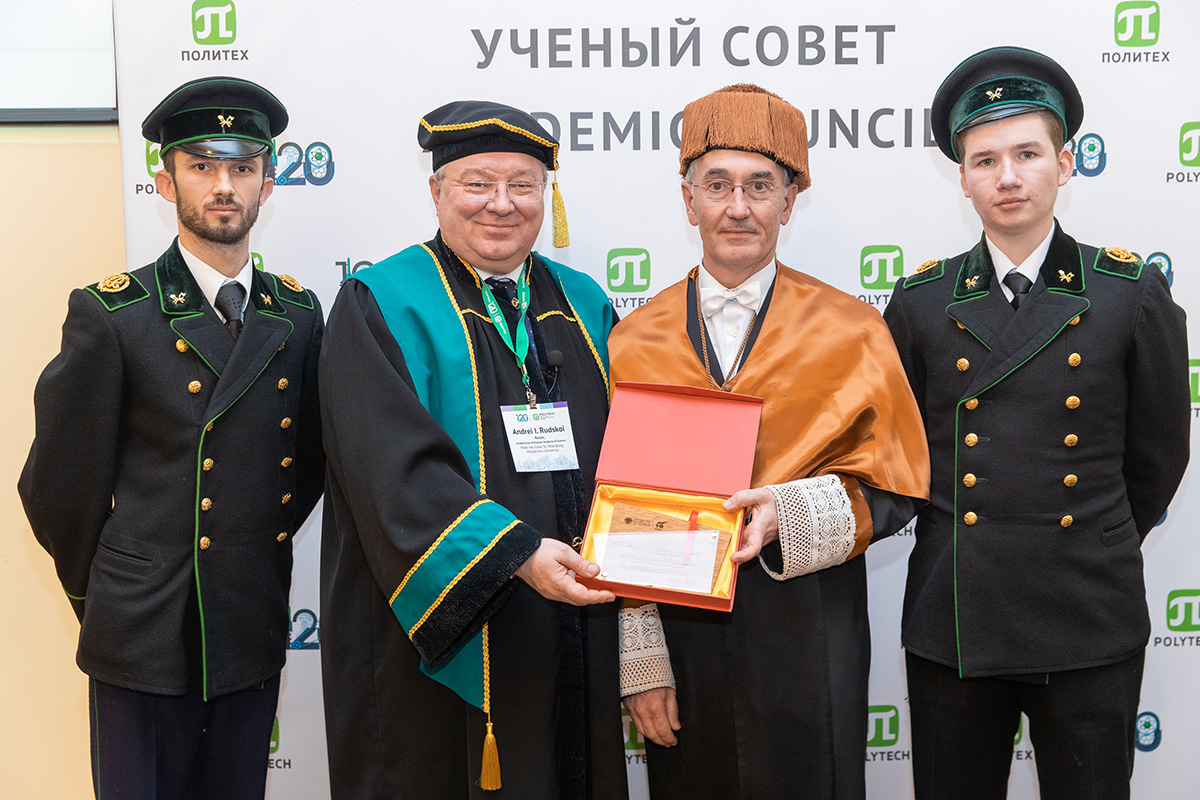 Another Polytechnic graduate came to congratulate his alma mater from the City, University of London. “Upon graduation, I often think with gratitude about the years I spent within these walls,” said professor Sanovar KHAN. “Our teachers gave us a lot more than just knowledge: they put their hearts into us. They taught us to think. I am delighted to know that the university keeps up with its traditions.”

Vice-Rector of the Russian-Armenian University Parkev AVETISYAN noted that the relations between our universities make “a solid foundation and platform in the context of strategic cooperation between Russia and Armenia.” He expressed his confidence that both universities will continue to build up the capacity to provide for the technological breakthrough that both countries are in need of. For the great contribution to the development of partnership, the Academic Council of the brotherly university awarded the Polytechnic with an honorary order of the Russian-Armenian University. And by resolution of the Academic Council of the Kostanay Social and Technical University, Rector of Polytechnic University Andrey RUDSKOI was awarded with the title of Honorary Professor of the university. 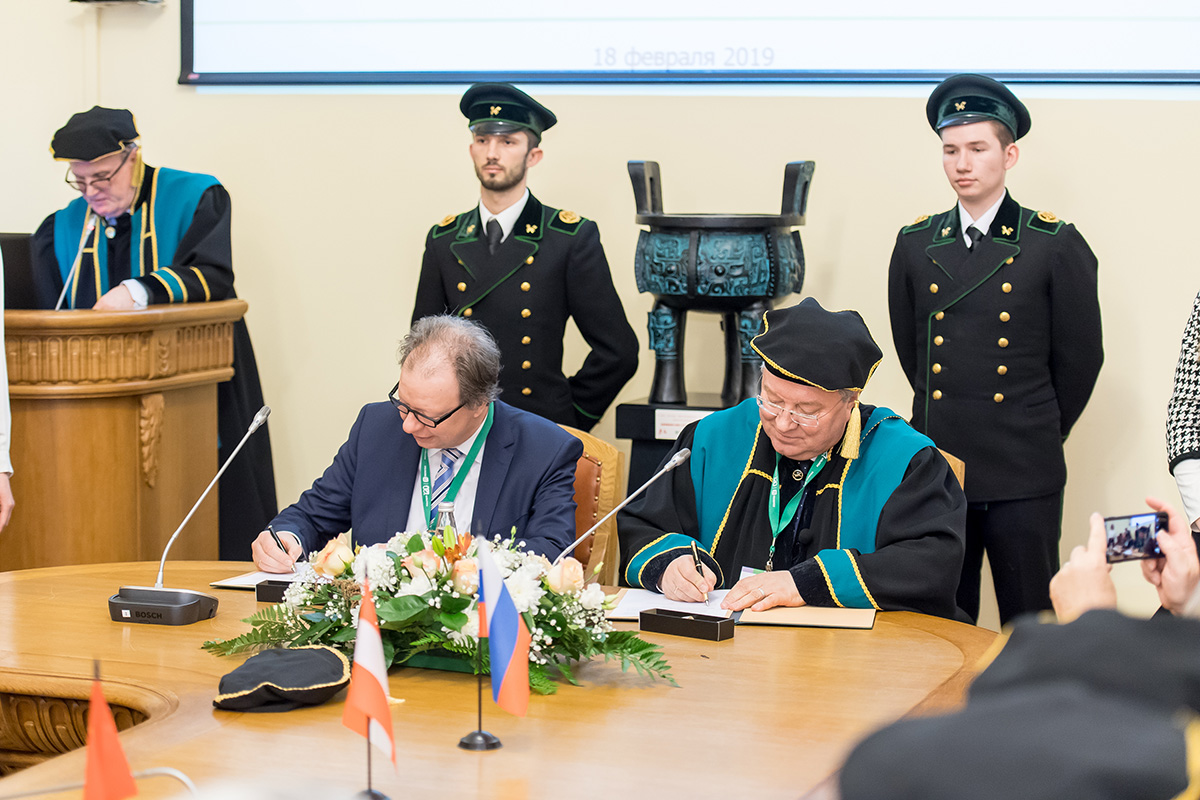 The ceremony of awarding the gown and diploma of an Honorary Doctor of SPbPU to the Minister of Economy and Energy of Brandenburg (Germany), Professor Jörg STEINBACH was the next highlight of the meeting of the SPbPU Academic Council Presidium. Professor STEINBACH had worked in senior positions at various universities in Germany and made a great personal contribution to their cooperation with Polytechnic University. Thus, during his presidency at the Technical University of Berlin, our universities became strategic partners. Under the directorship of Jörg STEINBACH, Brandenburg University of Technology, Cottbus became one of the key partners of SPbPU. The Laboratory of Light Materials and Structures was created in collaboration with this institution within the framework of the Polytechnic Mega Grant Program; this laid the basis for the development of joint Master’s degree and doctoral programs. 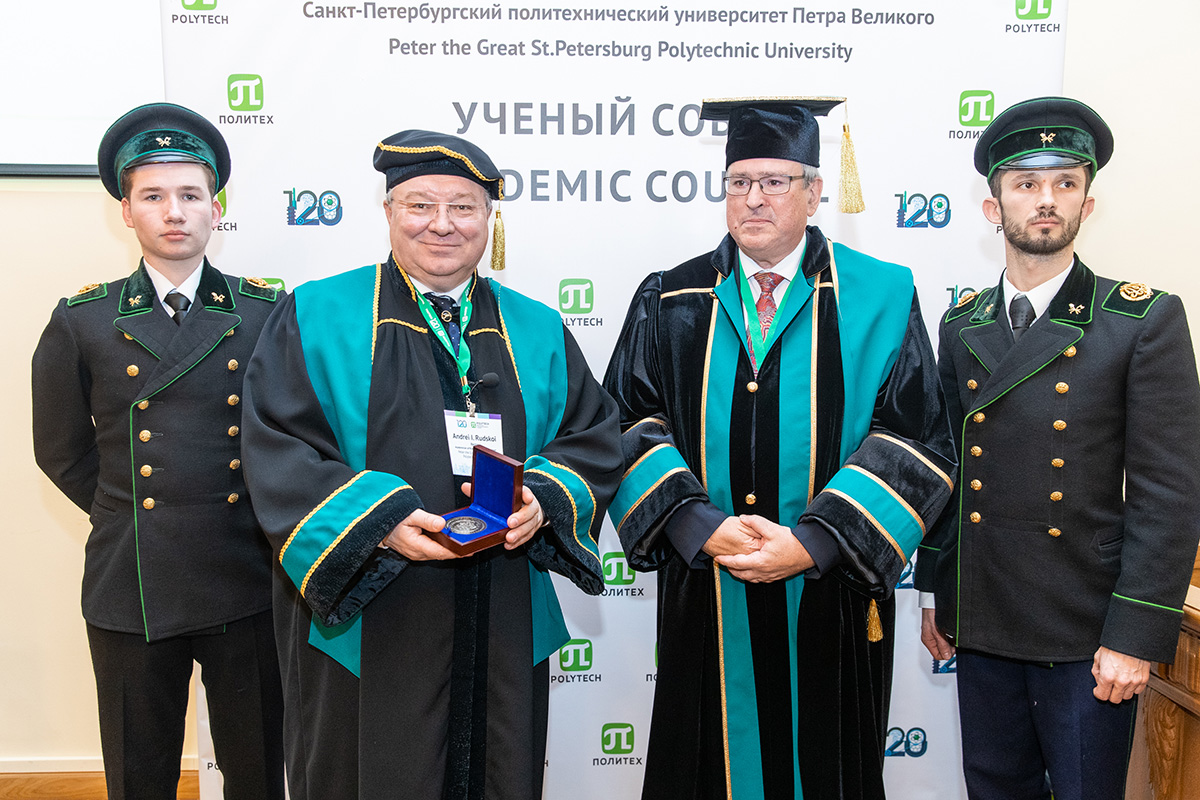 The title of Honorary Doctor of SPbPU is awarded for special achievements in the field of science, education and culture to leading Russian and foreign specialists, whose activities contributed to the strategic development of the university, expand areas of cooperation, and enhance its authority at the international level. “I would like to draw your attention to the following circumstance: the first honorary doctor of our university was an outstanding German scientist. And for the first time in the practice of our Academic Council, we are now honoring with this title a statesman of the Federal Republic of Germany,” stressed the scientific leader of SPbPU, Academician of the RAS Yury V. SERGEEV.

After the introduction of professor STEINBACH, the Rector of Polytechnic University presented the attributes of the Honorary Doctor of SPbPU, a medal and a diploma certifying his new position to Jörg STEINBACH; this was accompanied by the students’ anthem Gaudeamus performed by the Polyhymnia Youth Choir. In response, the professor noted that the assignment of such a high rank is another opportunity for him to become an ambassador of friendship between our two countries. “I promise Polytechnic University, the Academic Council and you, Professor Rudskoi, personally that whenever you need me, I will be here in two hours of plane flight, and I will support the university with everything I can do,” Jörg STEINBACH concluded. 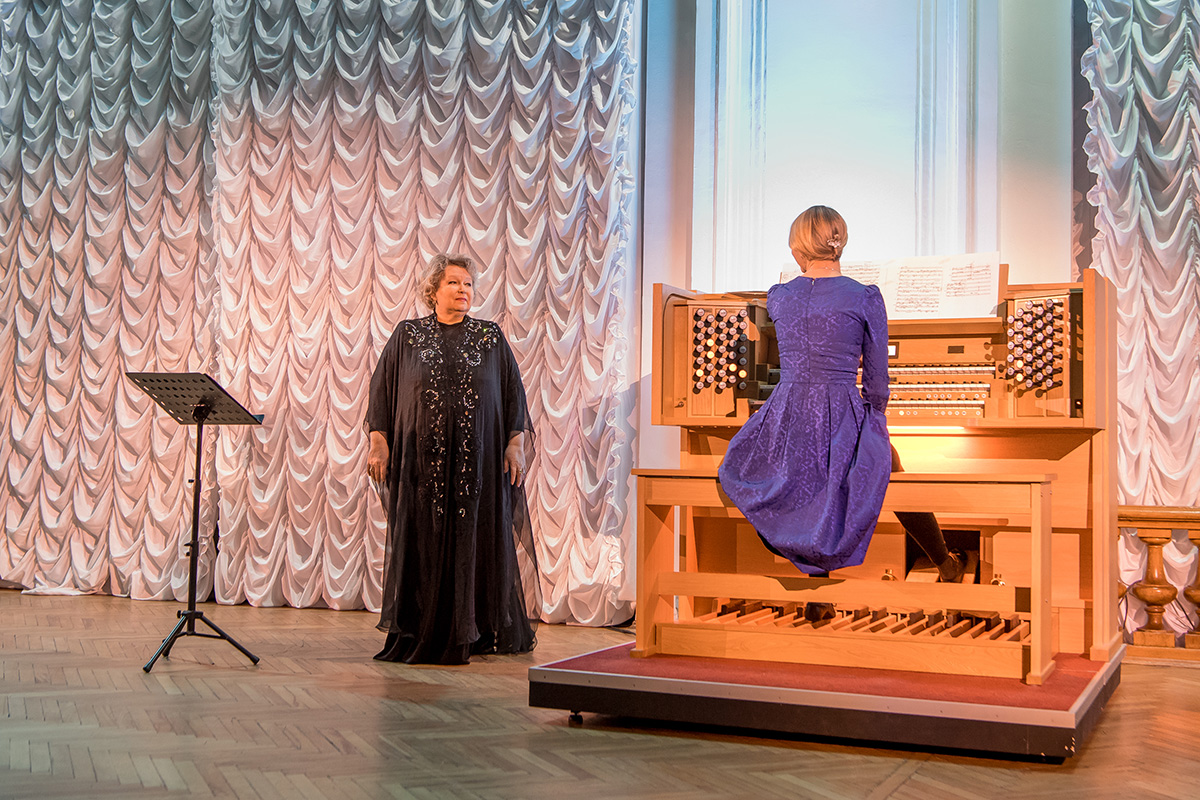 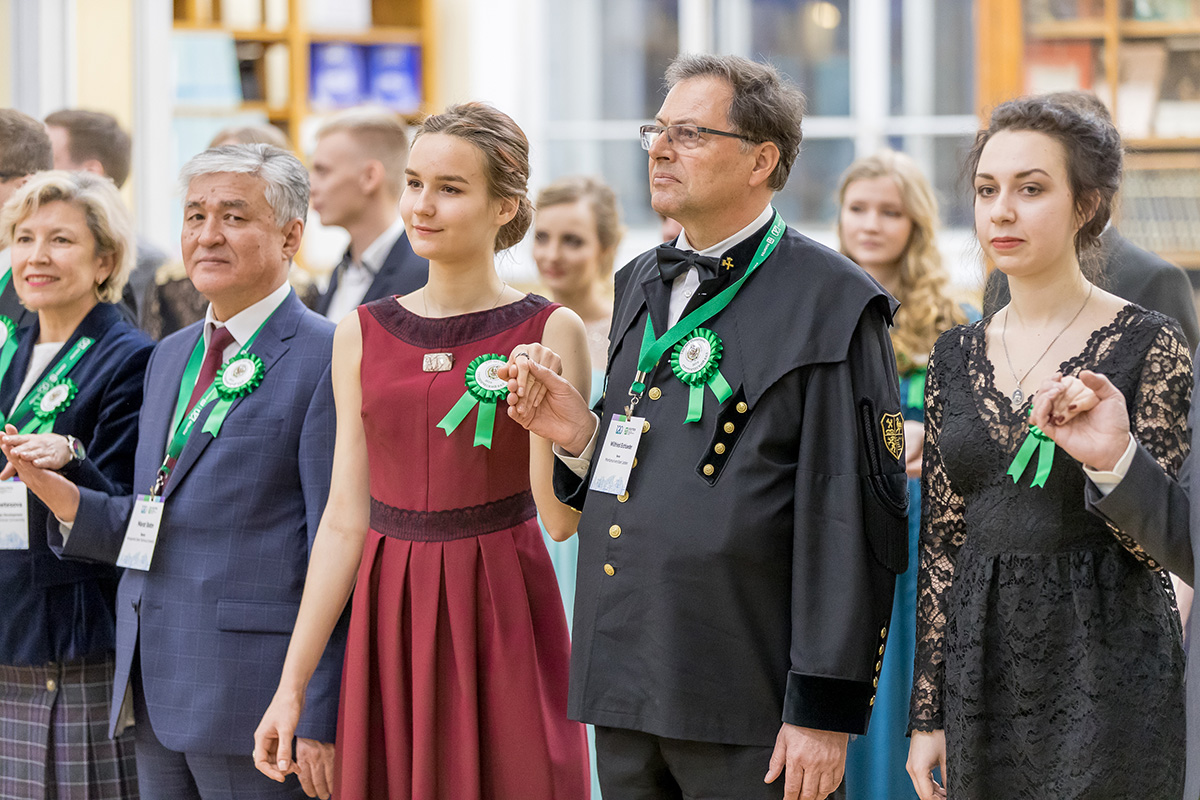 After the Academic Council Presidium session, the guests were invited to a concert of organ music in the White Hall, after which they took part in the opening of the traditional student ball timed with the birthday of Polytechnic University. An intensive program awaits the foreign guests tomorrow, on the day of the celebration of the 120th anniversary of Polytechnic University. It will start bright and loud: with participation in the ceremony of the midday shot from the Peter and Paul Fortress in the honor of the SPbPU anniversary.