Despite closed borders, SPbPU remains in touch and develops international cooperation with the Asian region. At the end of last week, Polytechnic University took part in the meeting of the Executive Board of the University Alliance of the Silk Road (UASR), which the university has been a member of since 2016. The event took place within the UASR Events 2020 forum, organized by Xi'an Jiaotong University (China) in collaboration with Politecnico di Milano (Italy). Because of the coronavirus pandemic, all events were held in remote form on the Webex platform. 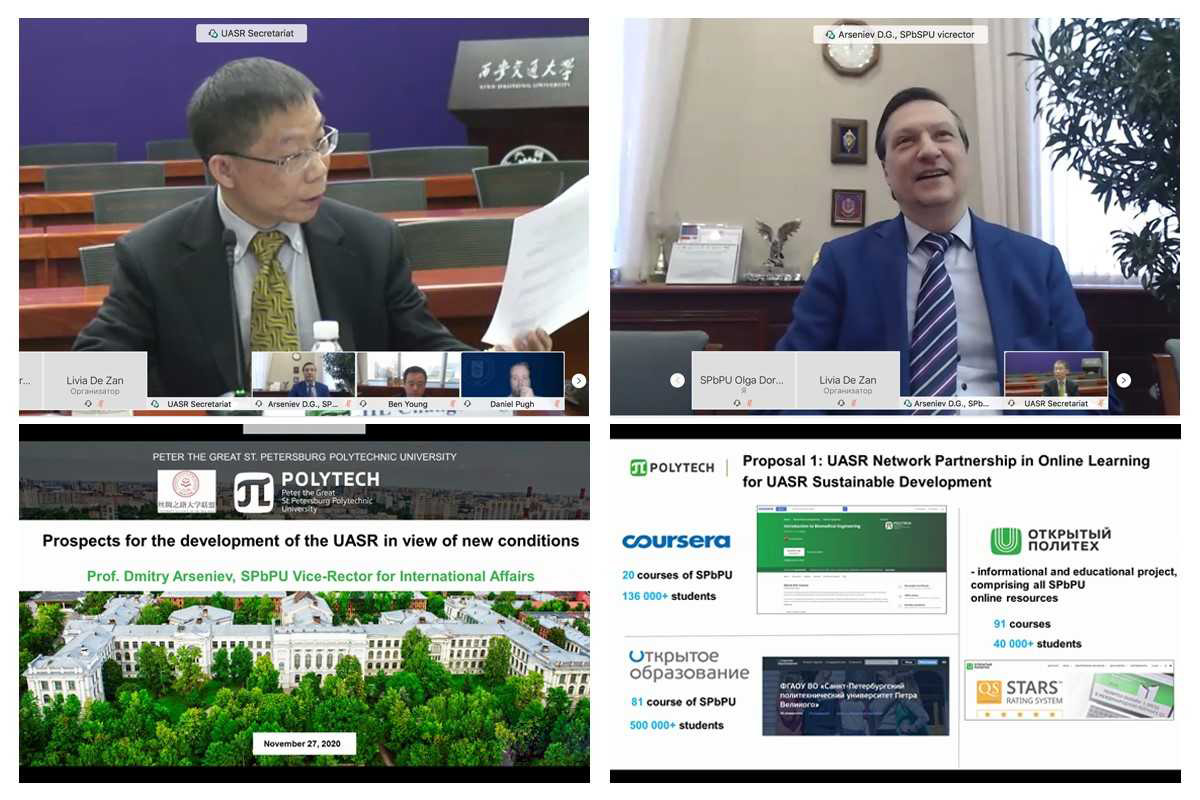 The Alliance of Silk Road Universities was established in 2015 in the Chinese city of Xi'an with the active participation of SPbPU. Today the network unites over 150 universities in Europe and Asia, 18 of which are members of the Executive Board of UASR. At the UASR Executive Board meeting held on November 27, 2020, Xi'an Jiaotong University, Secretary General of UASR, Director of Department of International Cooperation & Exchanges, presented a report on the Alliance's activities in 2020 and also introduced 4 new universities that have applied for membership in UASR. The central part of the meeting was the consideration of the proposals of Saint Petersburg Polytechnic University and Milan Polytechnic University on the development of cooperation between universities within UASR.

On behalf of SPbPU the participants were addressed by the vice-rector for international affairs Dmitry ARSENIEV. “UASR Alliance unites leading universities of the world. Among them are two strategic partners of SPbPU - Politecnico di Milano and Hong Kong Polytechnic University, and one of the key partners of our university – Xi’an Jiaotong University. Since the first days of the Alliance, we have been developing diverse formats of interaction with our foreign colleagues, as well as active in other network partnerships. The COVID-19 pandemic presented us all with global challenges that needed to be addressed immediately. We have formulated the most relevant proposals, and today we will present them to Alliance members for further work,” Dmitry Arseniev noted.

Polytechnic University made a proposal to develop a network partnership in the field of distance education - to conduct joint courses and internships, webinars on the implementation of distance technologies. Another initiative of St. Petersburg Polytechnic University was the implementation of the Student Project Marathon network project between member universities of UASR, relying on the ready-to-use infrastructure of the Alliance. The university also proposed to create a single portal of UASR with the possibility of posting information on priority scientific areas, leading scientific groups and promising joint projects, and expressed the idea to use the capabilities of the world-class Science Center to enhance cooperation among Alliance members in the field of digitalization, intelligent production technologies, development of robotic systems, big data, machine learning and artificial intelligence, as well as on the entire spectrum of development and application of Arctic technologies.

All proposals formulated will be documented in a general presentation of UASR, which the Secretariat will send to Alliance members for further discussion.

The University Alliance of the Silk Road (UASR, University Alliance of the Silk Road) is a non-governmental and non-profit organization dedicated to openness and international cooperation in higher education. UASR was initiated by Xi'an Jiaotong University in 2015 against the backdrop of the Chinese Central Government's "One Belt, One Way" strategy. Today, the Alliance includes more than 150 universities in Europe and Asia, 18 of which are members of the UASR Executive Board.

Since 2016, SPbPU (initially as an observer, then - as a member of the Executive Committee) is actively involved in the activities of the University Silk Road Alliance. The priority area of St. Petersburg University Alliance activities is the development of student exchange programs, joint educational events, and international summer schools.