Peter the Great St. Petersburg Polytechnic University and the Ministry of Mecklenburg-Vorpommern continue to develop cooperation

Prospects for cooperation in the field of mechanical engineering were discussed by scientists from SPbPU and the Fraunhofer Institute for Research on Large Structures in Production Technology (Germany). The seminar with Russian and German colleagues took place online at the end of February. It was a logical continuation of the negotiations between SPbPU and the Ministry of Economics, Labor, and Health of the Federal Land of Mecklenburg-Vorpommern, which took place at the end of 2020. At that time, it was decided to hold two online seminars on mechanical engineering and medicine, focusing on the creation of project micro consortiums that bring together universities and industrial companies from Russia and Germany. 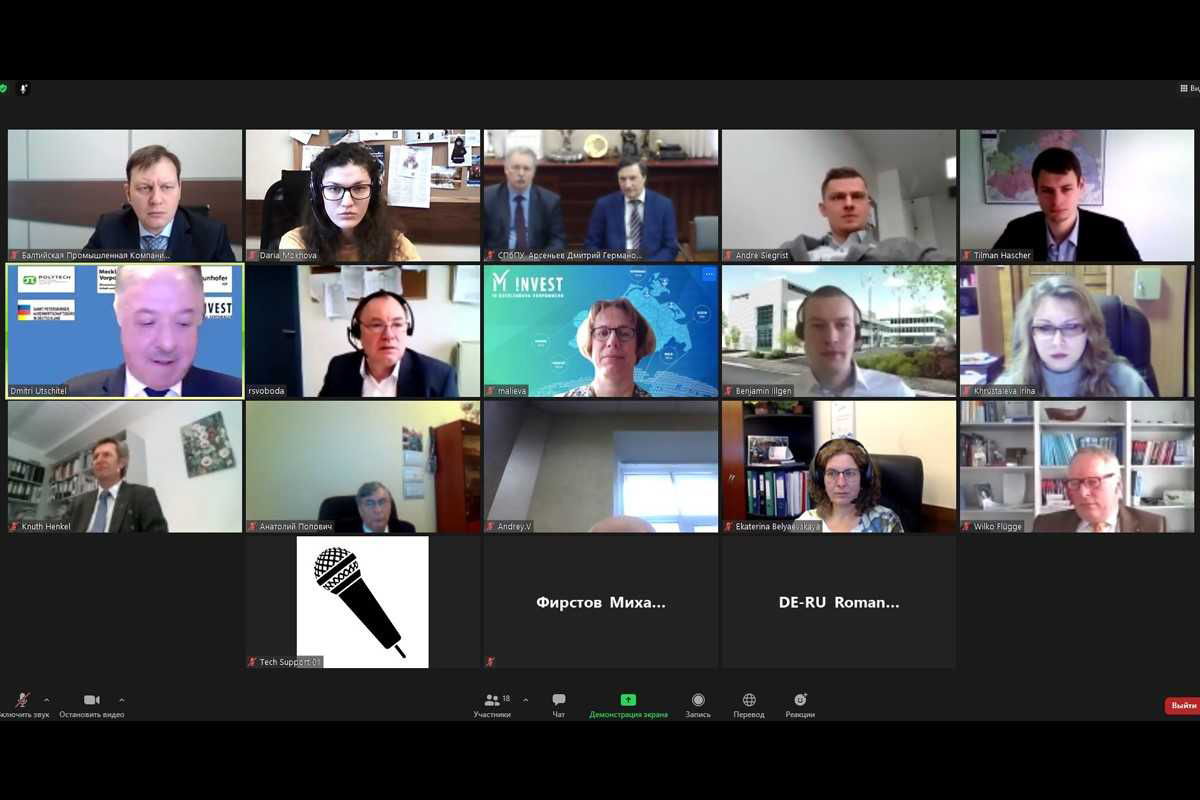 Ralf SVOBODA, Head of the Department for Technological Cooperation of the Ministry of Economics, Labor and Health of Mecklenburg-Vorpommern, opened the seminar on mechanical engineering. In his speech, Mr. Swoboda presented the strategy for innovation and technological development of the region of Mecklenburg-Vorpommern and emphasized that mechanical engineering is one of its key areas along with renewable energy and biomedicine.

The program of the seminar included reports of representatives of universities and companies from Russia and Germany. Dmitry UCHITEL, head of the St. Petersburg External Economic Office in Germany, the organizer and moderator of the online meeting from the German side, announced the topics of speeches and participants.

In Mecklenburg-Vorpommern Land with its geographical advantages and access to the Baltic Sea, one of the structure-forming branches of industry is shipbuilding. It is precisely this topic that was the focus of the contributions from our colleagues at the Fraunhofer Institute for the Study of Large Structures in Manufacturing Technology (hereinafter referred to as Fraunhofer IGP). Professor Wilko FLUGGE, Director of the Fraunhofer IGP, presented the capabilities of the Competence Centre “Production Technology and Shipbuilding in the Mecklenburg-Western Pomerania region.” For Fraunhofer IGP, the main interest for cooperation in this area is in such areas as the creation of wind energy facilities for offshore and shelf conditions, underwater construction, new materials, including composite materials and polymers, metrology, corrosion control, and many others.

Prof. Knut-Michael HENKEL, Head of Production Technology at Fraunhofer IGP, spoke separately about thermal and mechanical joining technology for large marine and structural steel structures. Based on the already existing experience of cooperation in the field of welding technologies, in particular, in the field of underwater welding, with the scientific group of Professor Sergey PARSHIN of the Higher School of Physics and Material Technologies of SPbPU, Professor HENKEL offered to cooperate on the development of offshore structures and structures for wind power engineering.

Current projects in the field of new technologies in port logistics and robotics in modern agriculture were presented by research associates of Fraunhofer IGP Benjamin ILLGEN and André SIGRIST.

The Russian side met with true interest the topics of German colleagues’ presentations. Professor Dmitry ARSENIEV, Vice-Rector for International Affairs of SPbPU, emphasized that there is a wide range of common interests between scientists of Polytechnic University and German universities and companies and expressed his hope that after the meeting the participants will identify new promising points of interaction.

Director of the Institute of Mechanical Engineering, Materials and Transport Professor Anatoly POPOVICH opened the series of reports by the Russian participants. He spoke about the productive cooperation between SPbPU and Baltic Industrial Company, which has opened the specialized Department of Design and Technological Innovations in Mechanical Engineering at Polytechnic University and trains specialists in this area. Speaking about cooperation with Germany, Professor POPOVICH expressed the hope that “in future, it will be possible to combine our competencies and technical base for the implementation of large-scale international projects.”

Yuri CHURKIN, Financial Director of Baltic Industrial Company, made a speech on behalf of the company and presented the advantages of interaction between universities and industrial companies using cooperation with SPbPU as an example.

Irina KHRUSTALEVA, Senior Lecturer of the Higher School of Mechanical Engineering, talked about the automation of technological preparation of machine-building production using computer modeling in her report. “Combining joint efforts with German colleagues in this area can contribute to the development of new highly efficient methods for analyzing and planning production processes for machine-building enterprises,” emphasized Irina KHRUSTALEVA. Professor of the Higher School of Automation and Robotics Andrey VOLKOV told about mechatronic automation systems and robotics and presented projects implemented for city purposes, among them special equipment for the rolling field of Gazprom-Arena stadium, the complex of Petersburg flood protection structures, rotary stage of the Bolshoi Theatre of Russia and many others. “Similar projects are also being implemented by our partners from Germany, and we hope that by combining our knowledge and experience we will be able to implement even larger and more ambitious projects together,” said Professor VOLKOV.

In turn, the seminar participants from Germany showed considerable interest in the research and projects of Polytechnic University scientists. The Director of Fraunhofer IGP Professor Wilko FLUGGE expressed gratitude for the presentations and noted that the German side “does not have any concerns about further joint work, as both German and Russian colleagues have extensive experience in these subject areas.”

As a result of the online meeting, new contacts were established and prospects for further cooperation were identified. As the next steps, the parties plan to organize separate meetings in the nearest future to discuss the developments and potential projects in specific areas such as welding, logistics, robotics in agriculture, and others.

The next seminar, devoted to medicine and biotechnology, will be held on March 4. Following the results of the two sessions, Mr. Ralf SVODODA also suggested organizing a new meeting between the Rector of SPbPU, Andrei RUDSKOI, and Stefan RUDOLF, State Secretary of the Ministry of Economics, Labor and Health of the Federal State of Mecklenburg-Vorpommern, to summarize the interim results and discuss the possibility of implementing specific projects that can compete at the global level.