Peter the Great St. Petersburg Polytechnic University participated in a ceremony celebrating the 25th anniversary of Binh Duong University (BDU; Vietnam). As part of an eventful program, the universities opened a joint laboratory «Smart Systems and Smart City», and Dr. Cao Viet Hieu, the rector of BDU, was awarded the mantle of Honorary Professor of SPbPU. The Rector of SPbPU, RAS Academician Andrei Rudskoi congratulated the partner university on the significant events, noting that today Binh Duong University has established itself as an advanced center of innovative education and is simultaneously a major research center of the Republic of Vietnam. 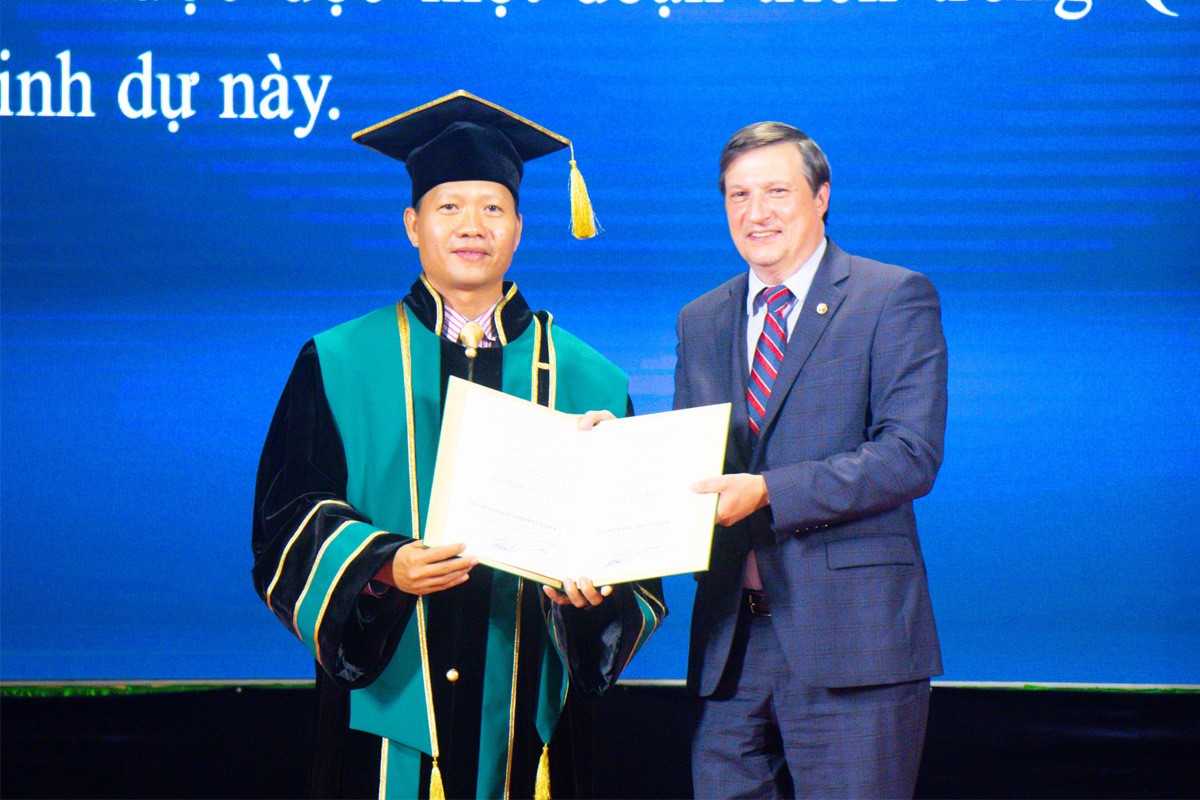 It is a matter of pride for me to understand that Polytechnic University has contributed to the successful development of Binh Duong University, the Rector of SPbPU pointed out, The highest level of our cooperation is the opening and operation of joint research laboratories, which have become points of growth and development of advanced technologies. And thanks to joint educational programs and research projects, a close connection and friendship of our scientists and professors has been established. 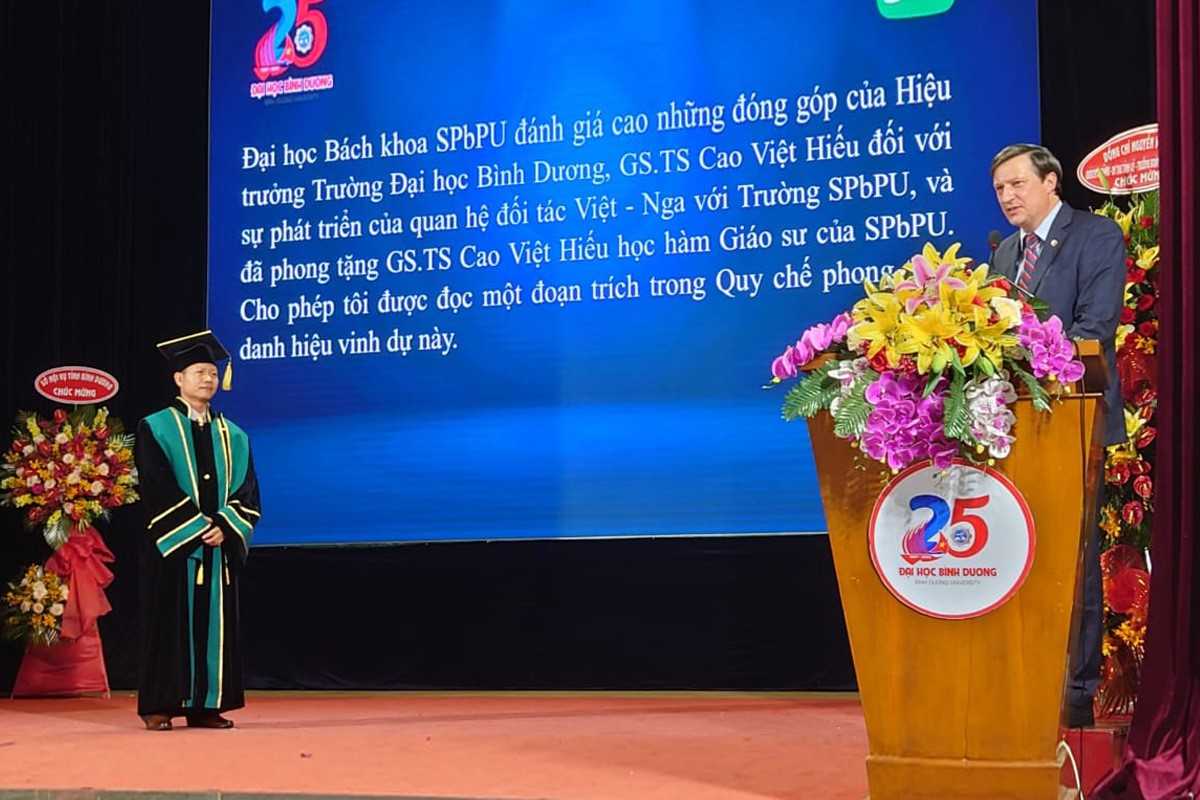 The congratulatory address of the Rector of SPbPU at the anniversary events was presented by the delegation of Polytechnic University, which was headed by the Vice Rector for International Affairs, Professor Dmitry Arsenyiev. The delegation also included Viktor Krasnoschekov, the director of Higher School of International Educational Programs, Associate Professor Victor Malyugin, the coordinator of cooperation with the Republic of Vietnam, and Vyacheslav Potekhin, the director of SPbPU — FESTO North-West Interuniversity Regional Educational and Scientific Center.

In his welcoming speech, Vice-Rector for International Affairs of SPbPU Dmitry Arsenyiev emphasized that over the many years of cooperation, Polytechnic University and Binh Duong University actively developed exchange programs for teachers and students, trained specialists in the Russian language, trained master’s degree students and postgraduates in a wide range of economic and engineering disciplines. 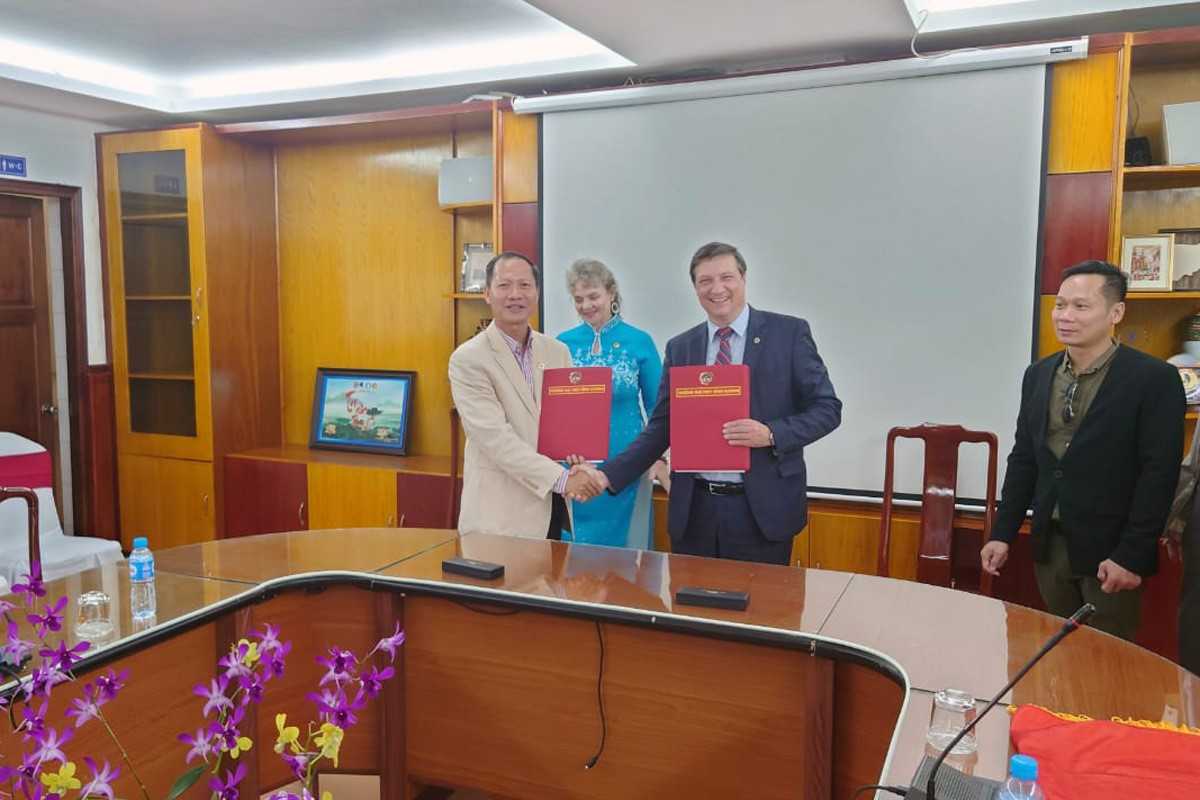 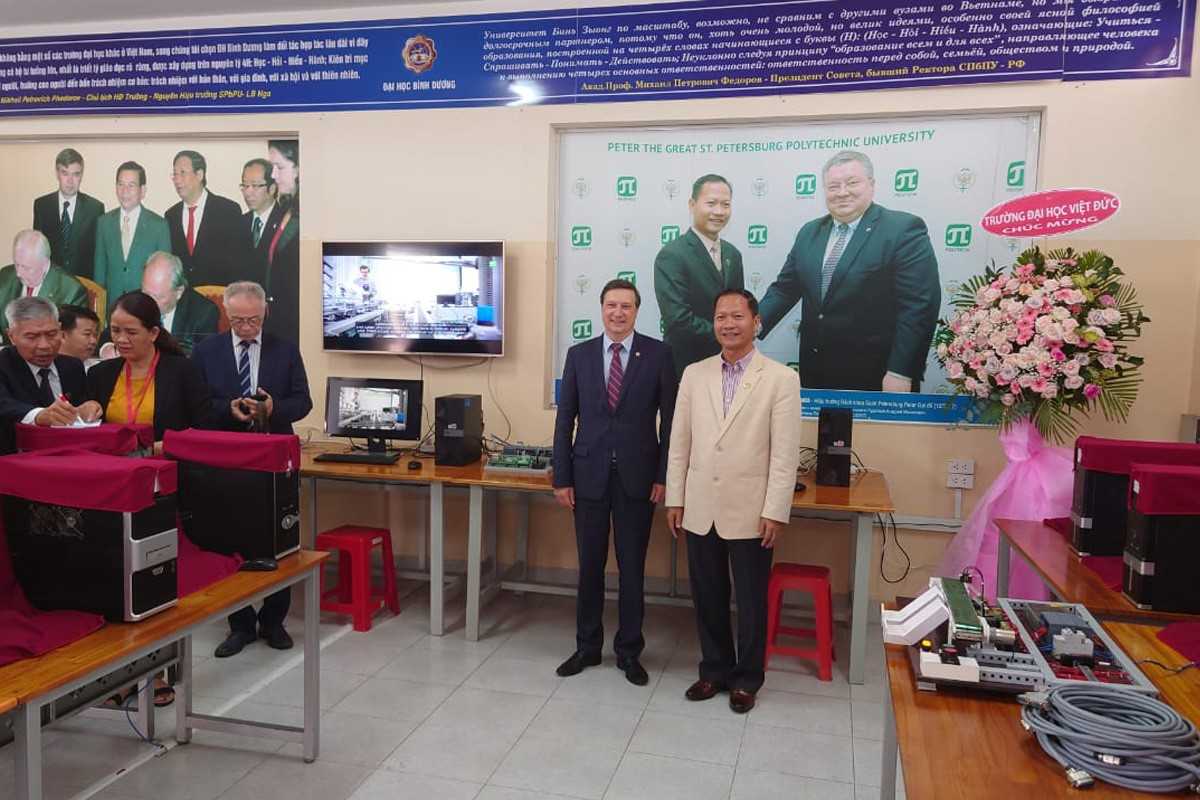 Great attention was paid to the creation of a research base: in 2018, a joint scientific and educational laboratory for Microprocessor Technology was opened at the site of Binh Duong University, and in 2022 we are opening another joint laboratory for smart systems, on the basis of which joint research projects and joint educational programs will be implemented, said Dmitry Arsenyiev.

The grand opening of the joint laboratory «Smart Systems and Smart City» was held as part of the jubilee events. The new project was officially launched by Rector of Binh Duong University Dr. Cao Viet Hieu and Vice Rector for International Affairs of SPbPU Dmitry Arsenyiev. It is planned that the scientists of the two universities will work together in the field of cyber-physical systems and cloud solutions of distributed control systems on the basis of the laboratory. In the future, it is planned to research and develop effective solutions using such technologies both in industry and in everyday life. 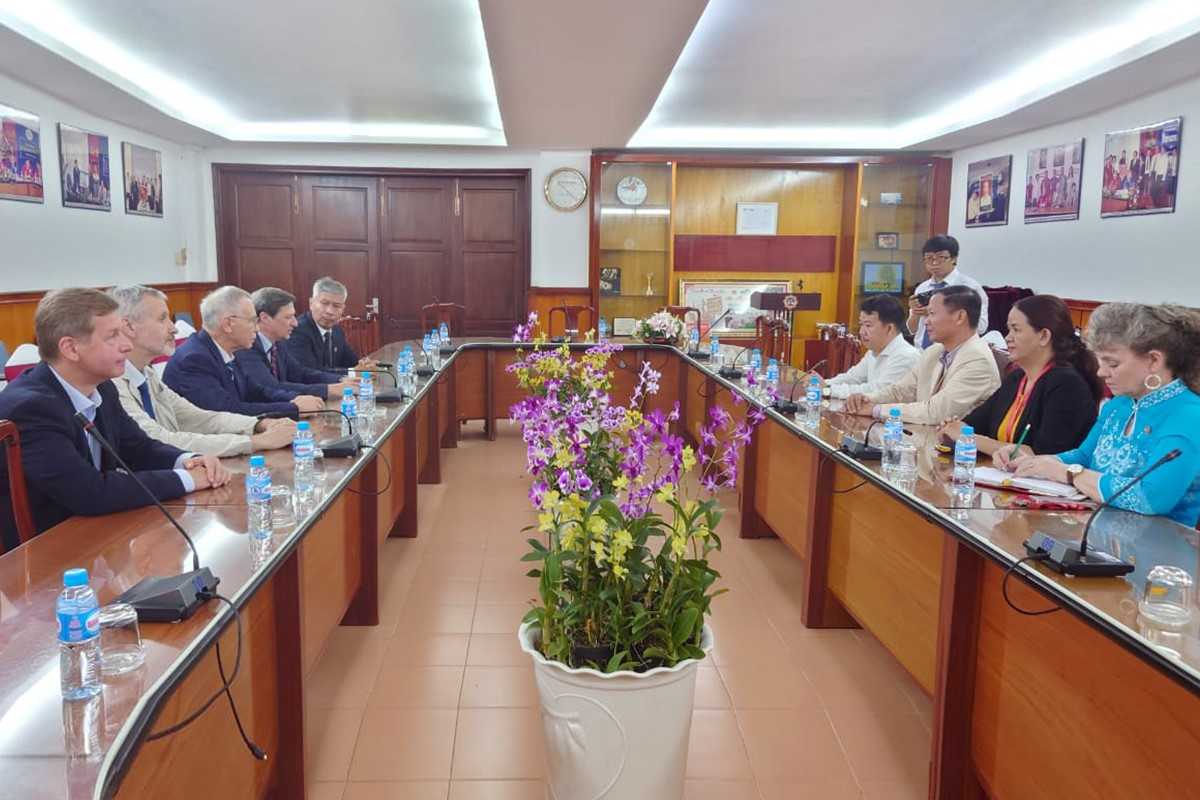 On the same day, another important event took place on the site of Binh Duong University: in the presence of the whole staff and invited guests, Dr. Cao Viet Hieu, rector of the university, was awarded the mantle of Honorary Professor of SPbPU and a commemorative medal. This resolution was adopted by the Academic Council of SPbPU last September. Polytechnic University highly appreciated the contribution of Dr. Cao Viet Hieu, Rector of BDU, to the development of Vietnamese-Russian cooperation and partnership with Polytechnic University. In turn, the head of the Vietnamese university emphasized that Polytechnic University is one of the special partners for Binh Duong University. During our cooperation, SPbPU has trained about 600 specialists for Binh Duong University. A close friendship has been established between our scientists and professors over the years. I hope that we will continue to multiply the positive results of our cooperation, said Cao Viet Hieu, Rector of BDU. 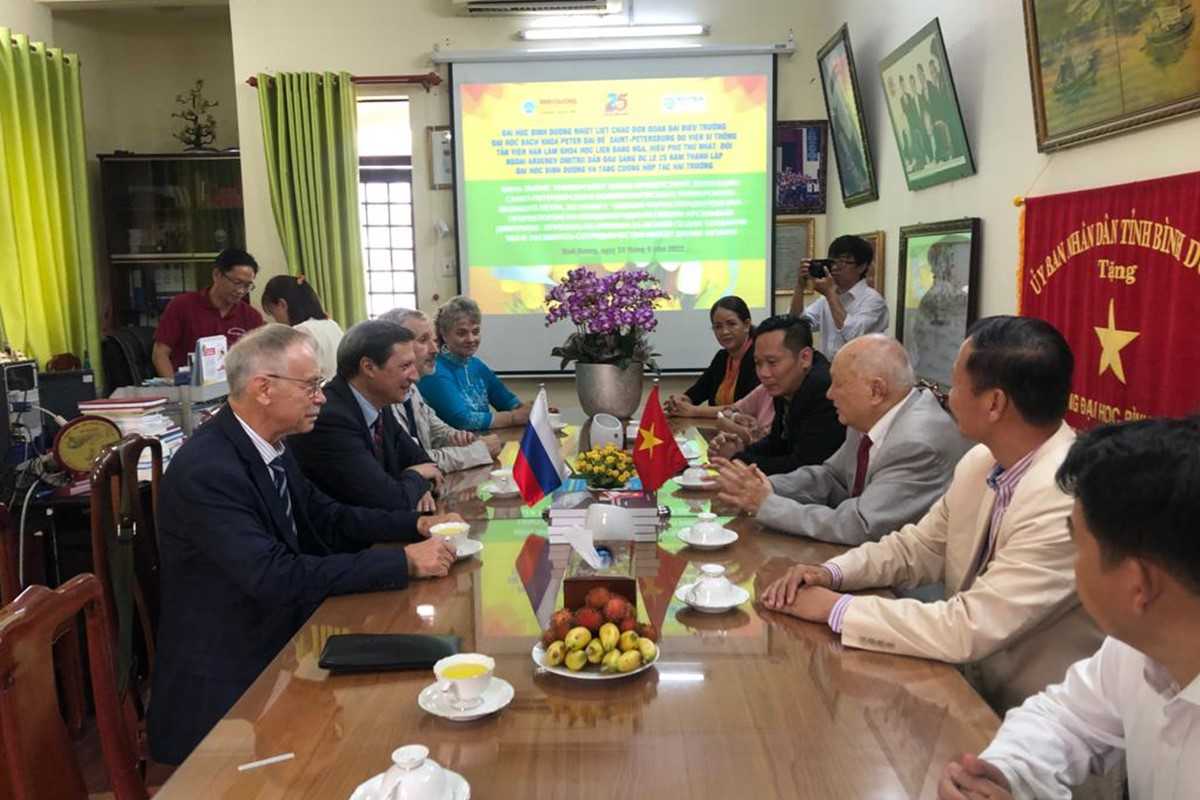 As part of the anniversary events, business negotiations were held with the Rector of Binh Duong University and the leadership of Binh Duong Province about the possibilities of developing cooperation in the training of highly qualified personnel and implementation of joint research projects in the field of Smart City. In addition, the parties agreed to hold a webinar for the Vietnamese students on the possibilities of admission to Polytechnic via the international competition Open Doors: Russian Scholarship project, the winners of which will be able to study for free in the programs of Master’s degree or Ph.D. studies at the Russian University. Another business meeting was held with the previous Rector — the current President of Binh Duong University Dr. Cao Van Phuong, who initiated the visit of the President of Vietnam, Comrade Nguyen Minh Triet to Polytechnic University in 2008 and defined the strategic direction of cooperation between the two universities and priority tasks in the field of education and training.

Binh Duong University is one of the strategically important partners of SPbPU in the Republic of Vietnam. The universities are linked by many years of fruitful cooperation. On the initiative of BDU and personally the previous Rector Mr. Cao Van Phuong in 2008, the President of Vietnam, Comrade Nguyen Minh Triet visited SPbPU and at the meeting with the management and students presented the order to award SPbPU with the Certificate of Honor for special services in training personnel and specialists of the Socialist Republic of Vietnam. Today, joint activities of SPbPU and BDU are actively developing on the basis of joint educational programs, establishment of laboratory facilities and research centers, participation in conferences and symposiums.