Russia-EU: Opportunities for Collaboration in Research

In the period of February 6-7 Peter the Great St. Petersburg Polytechnic University carried out "Polytech Days in Berlin" - a large-scale event that finalizes the year of the 120th anniversary of the university. One of the key areas of discussion within the event was cooperation in the field of research between Russia and Europe. On February 6 a round table “Russia-EU: Opportunities for Collaboration in Research” was organized jointly by the Polytechnic University and its leading partners in the field of research: the Technical University of Hamburg and Leibniz University Hanover. 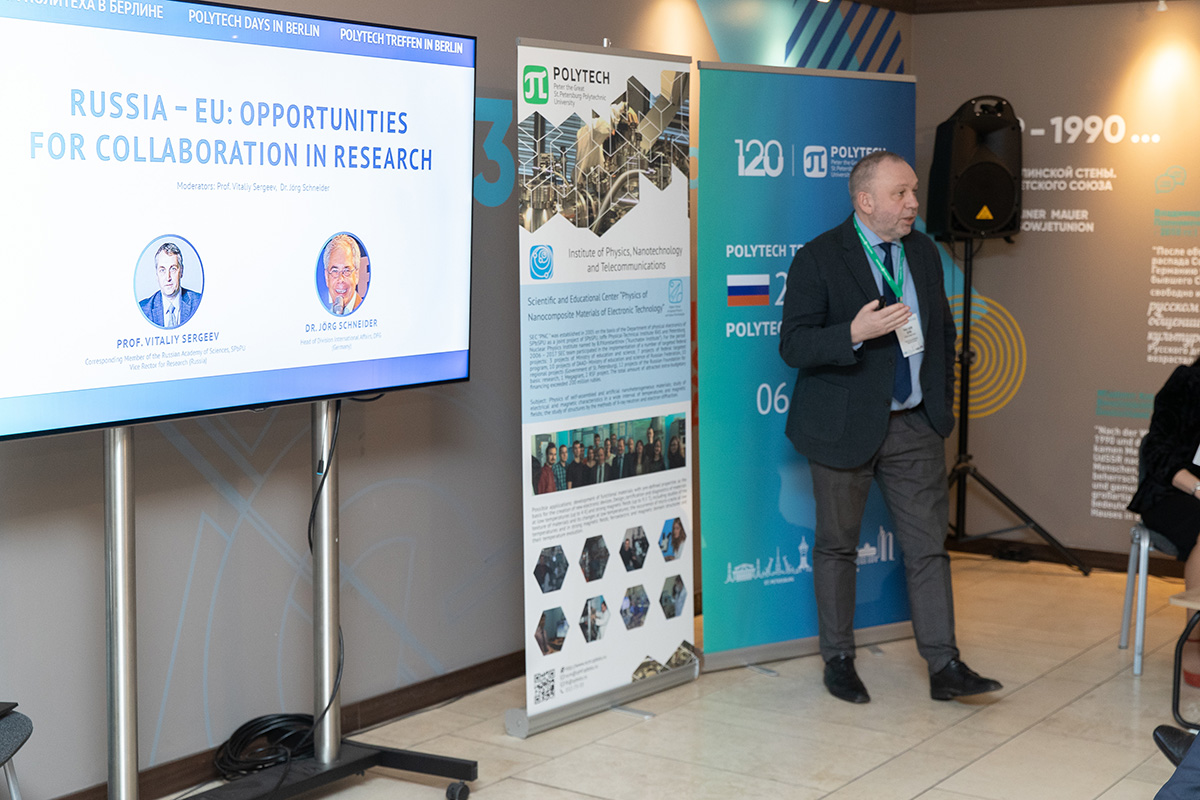 The key issue of the track was strengthening ties between scientists, that is essential for successful development of research. Today it is international research teams that create the most successful research product - the most efficient projects and the most cited publications. This is fully confirmed by the experience of Peter the Great St. Petersburg Polytechnic University. More than a third of all SPbPU scientific publications are developed in collaboration with foreign scientists and these publications are the most cited.

Within a two-hour business track held on February 6 scientists from different fields got together to discuss cooperation. Joint projects in the fields of physics, biotechnology, materials science, bioinformatics, mechanics, and logistics were presented.

In the keynote speech Vitaliy SERGEEV, SPbPU Vice Rector for Research, Corresponding Member of the Russian Academy of Sciences, noted that scientific collaborations are fully in the structure of the university’s life and are not dependent on the political situation. Some of the challenges that modern science faces are impossible to be solved by one or two scientists - they require large international teams. Such challenges are solved in megascience format, when many scientists from different research organizations and countries work on the project. Physicists at SPbPU are actively involved in CERN projects - experimental physics conducted at the Large Hadron Collider. The ultimate goal of all these experiments is “to understand what the Universe is made of and how it works.” 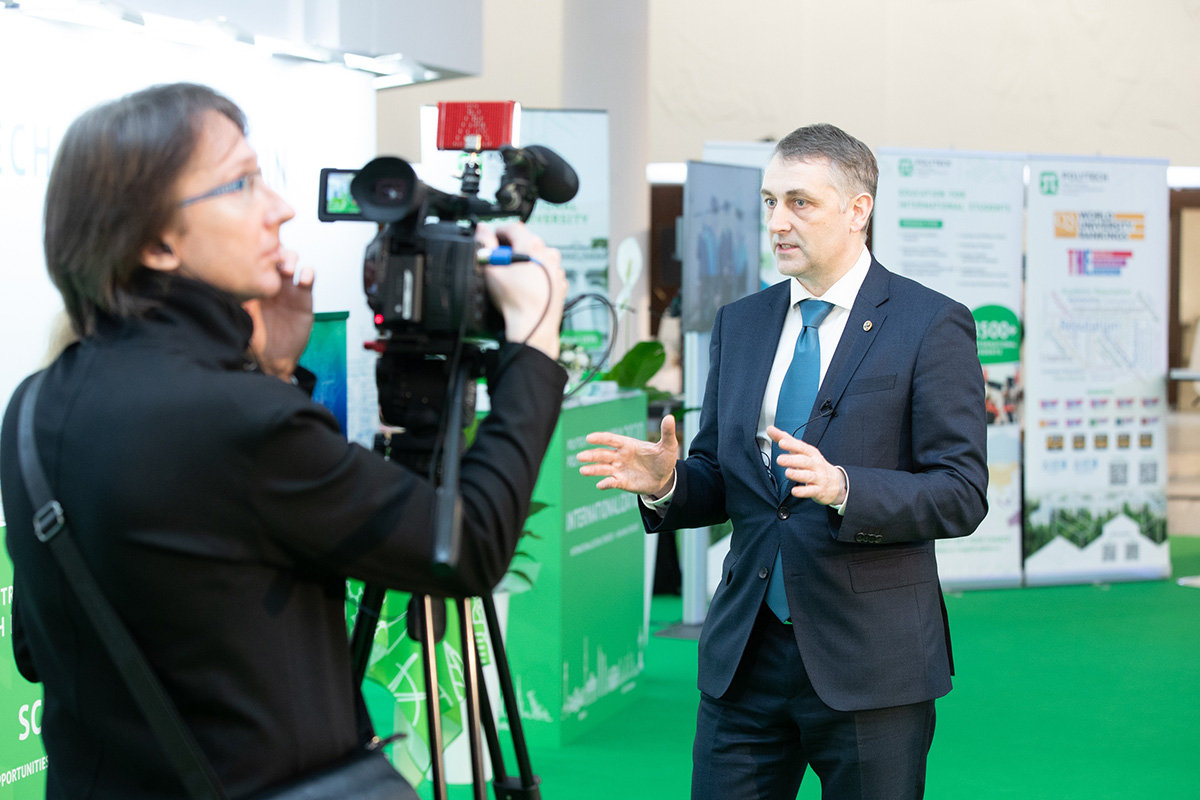 The second example of megascience projects given by V.V. Sergeyev in his report - the creation of the international fusion reactor ITER. All the leading countries of the world participate in this project. The construction of a tokamak is being conducted in the south of France. SPbPU scientists are working on computer modeling of plasma in a tokamak. In September 2019, SPbPU held a conference on plasma physics in cooperation with the publishing house Nature, where much attention was paid to the development of ITER.

In addition to megascience projects there are many options for collaboration between scientists, for example, research papers funded jointly by Russian and European foundations. Dr. Jörg Schneider, Head of International Cooperation at one of the leading European foundations, DFG, took part in the round table. His report on research funding in Germany aroused great interest among participating scientists. The issue of research funding is always an actual one, especially in the face of a complicated geopolitical situation. But Dr. Schneider emphasized in his report that the fund’s decisions were not due to political reasons, in particular, the joint program with the Russian Foundation for Basic Research.

Academic mobility makes an essential contribution to the internationalization of research, as it provides scientists with an opportunity to visit their collaborators. Professor Marc Christopher WURZ, Leibniz University Hannover, and Professor Aleksey FILIMONOV, Director of the SPbPU Research Center for Physics of Nanocomposite Materials of Electronic Technology, emphasized in their report the importance of such personal interaction. The German Academic Exchange Service DAAD has been involved in the project for producing ultra-pure alloys, financing mobility for this project for many years.

There are other ways to fund collaborative research. Dr. Dmitry FRISCHMAN from the Technical University of Munich spoke about his experience in creating a bioinformatics laboratory at Peter the Great St. Petersburg Polytechnic University. The project was supported by the Academic Excellence Project “5-100-2020”. Dr. FRISCHMAN noted that the main advantage for a European scientist to work in Russia is people who work at the university, in particular, talented young scientists. 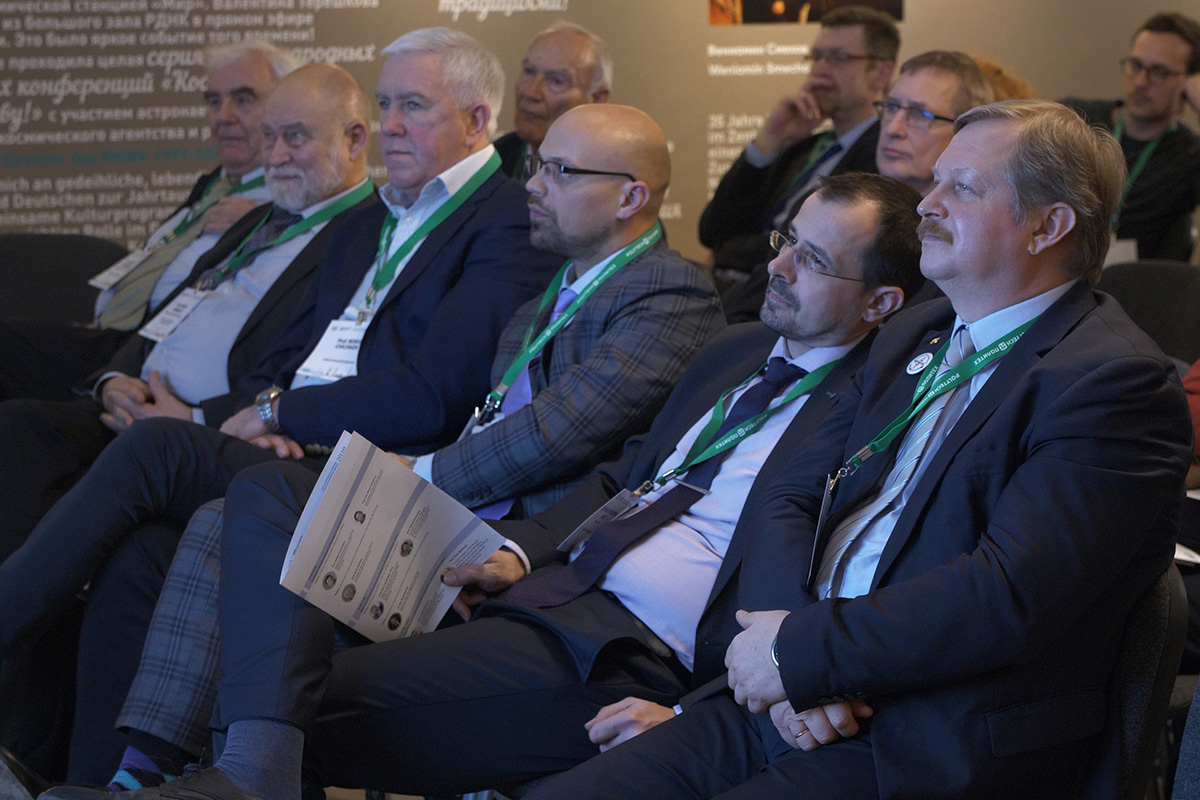 In general, the round table “Russia-EU: Opportunities for Collaboration in Research” had an informal atmosphere: scientists talked a lot about their personal experiences and relationships, since joint research projects are not only articles and experiments, but also interaction between people. For example, Professor Holm ALTENBACH from the Otto von Guericke University Magdeburg, and Professor Anton KRIVTSOV, Corresponding Member of the Russian Academy of Sciences, Director of the Higher School of Theoretical Mechanics, told about the time when they were studying at St. Petersburg Polytechnic University and their teacher Pavel Andreevich ZHILIN. The scientific school created by this outstanding scientist subsequently formed their joint scientific activity in the field of theoretical mechanics.

According to the participants, the event was an excellent platform for the exchange of experience in international cooperation between scientists and once again showed that science has no boundaries.