On February 6-7, 2020, Polytechnic University holds the ‘The Polytech Days in Berlin’. The forum is held as part of the Russian-German Year of Scientific and Educational Partnerships 2018-2020. The program of the two-day forum includes an exhibition of scientific developments, panel discussions, business tracks. The event will also host the European Alumni Forum of St. Petersburg Polytechnic University. The opening ceremony took place today. 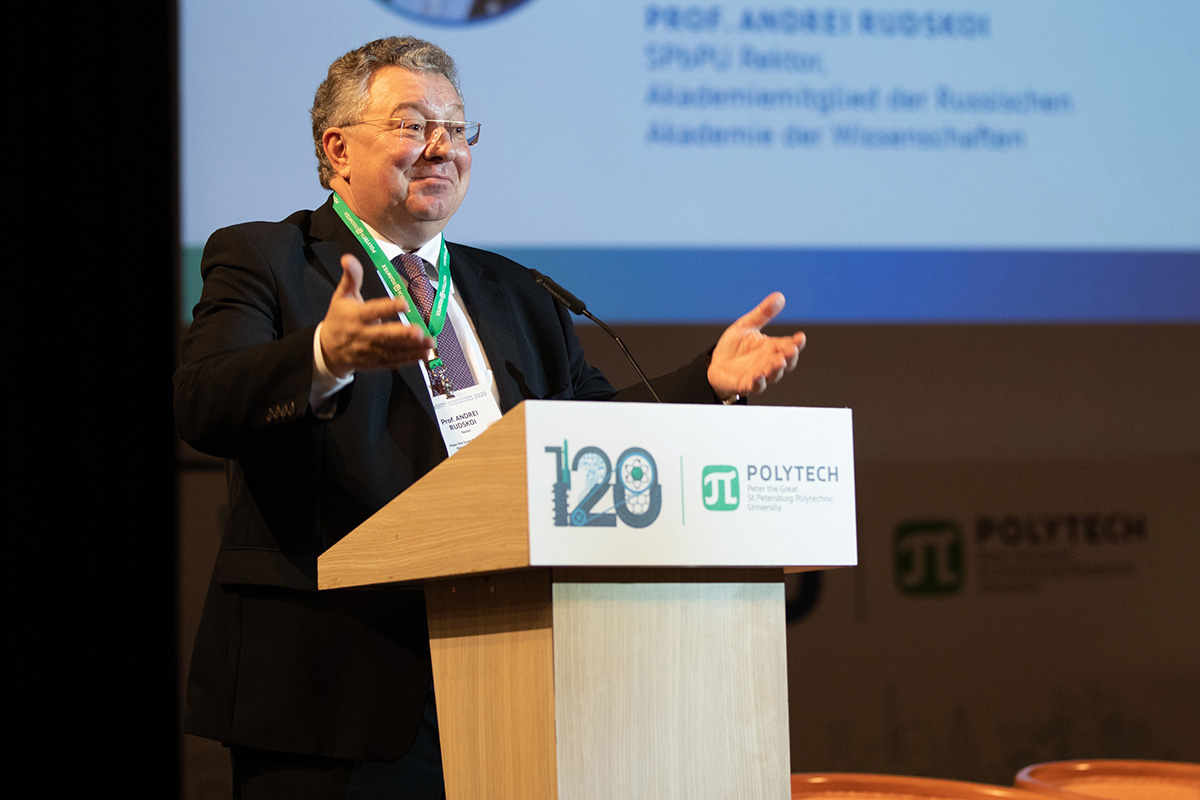 For Peter the Great St. Petersburg Polytechnic University, Europe is a strategic region, interaction with which has been going on since the foundation of the university in 1899. Originally, teaching at the first Polytechnic Institute of Russia was conducted in three languages: German, Russian and English. One can see the features of the main building of the Technical University of Berlin in the general look of the main building of Polytechnic University. For more than 100 years, Polytechnic University has been developing cooperation with Europe; currently, SPbPU has partnerships with more than 400 educational, research and industrial organizations. These include such principal world companies as Siemens AG, Festo Holding GmbH, AIRBUS, Philips GmbH, Robert Bosch GmbH, Kawasaki, Boeing, SAP SE, etc.

SPbPU Rector Prof. Andrei RUDSKOI, Academician of the Russian Academy of Sciences, opened the forum program with a welcoming speech at the plenary session: “Today, partners and graduates from more than 15 countries have got together here. The geography of the participants of the first large-scale forum in the recent history of Polytechnic University abroad is amazing. Once again, I am convinced that there are many friends of our university worldwide <...> I am certain that this event will mark the beginning of a good tradition of international communication, contribute to greater openness, confidence and understanding, not only in education and science, but and in the relations between our countries in general.” The forum is dedicated to the 120th anniversary of SPbPU, and the rector expressed the hope that in five years, the Polytechnic and their partners will gather again in Berlin to celebrate the 125th anniversary of Polytechnic University. 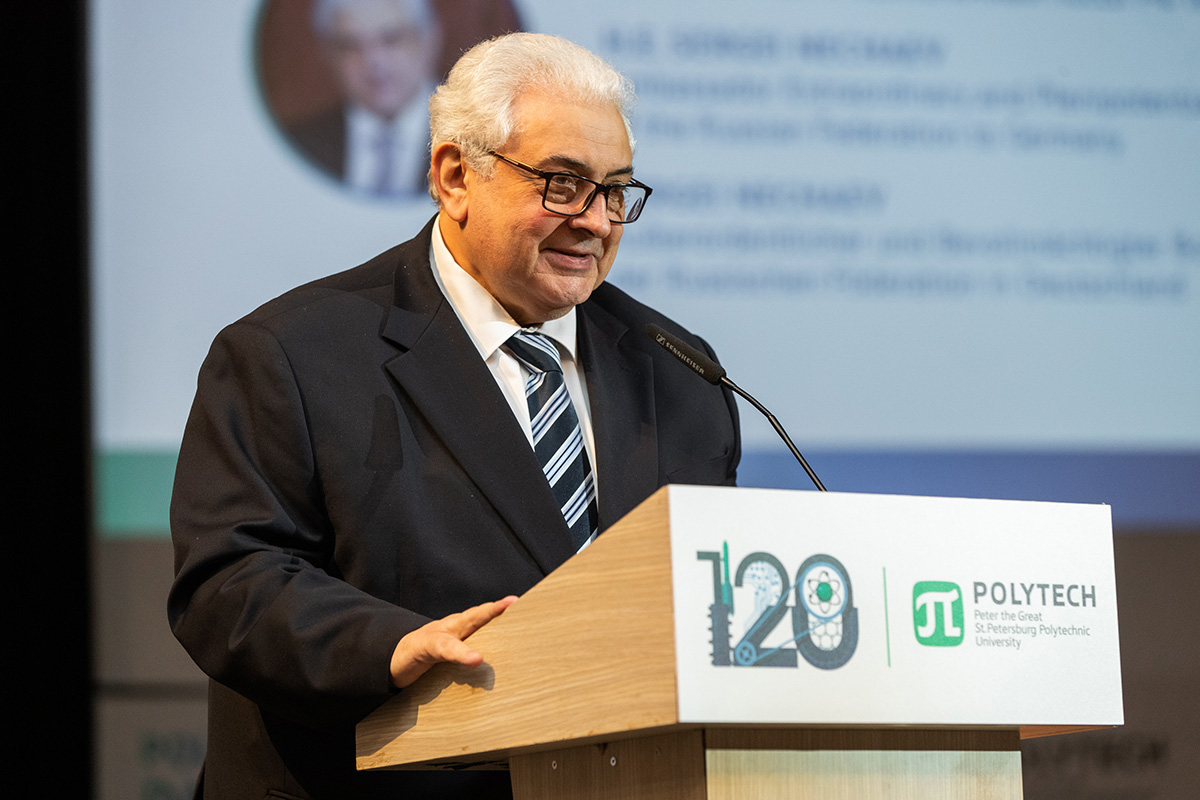 Among the honored guests of the Days of Polytechnic University in Berlin was the Ambassador Extraordinary and Plenipotentiary of the Russian Federation to Germany Sergey NECHAEV. He stressed that the establishment of world science has always been associated with the name of St. Petersburg Polytechnic University. He also noted that Russia and Germany have always had a lot in common in the field of scientific and educational cooperation, and these traditions keep being supported: “An international road map for 10 years of joint research has been signed and is being implemented. And I’m sure that there still is a lot to be accomplished to bring our joint ideas to life for the benefit of our peoples <...> Scientists from all over the world collaborate with each other in the interest of the future of our planet, sharing essential ideas that would strengthen our civilization and contribute to those ideas which have been expressed more than once by both the President of Russia and many European politicians. The idea of creating a pan-European space of science and education from the Atlantics to the Pacific Ocean is alive and can be implemented by our joint efforts.”

State Secretary, Ministry for Economic Affairs, Employment and Health, Mecklenburg-Vorpommern Dr. Stefan RUDOLPH in his speech noted the significant role of cooperation between Russia and Germany in the field of science and business in achieving global goals - universal well-being and peace. He also recalled that the current year marks 76 years since lifting the siege of Leningrad and declared a moment of silence. 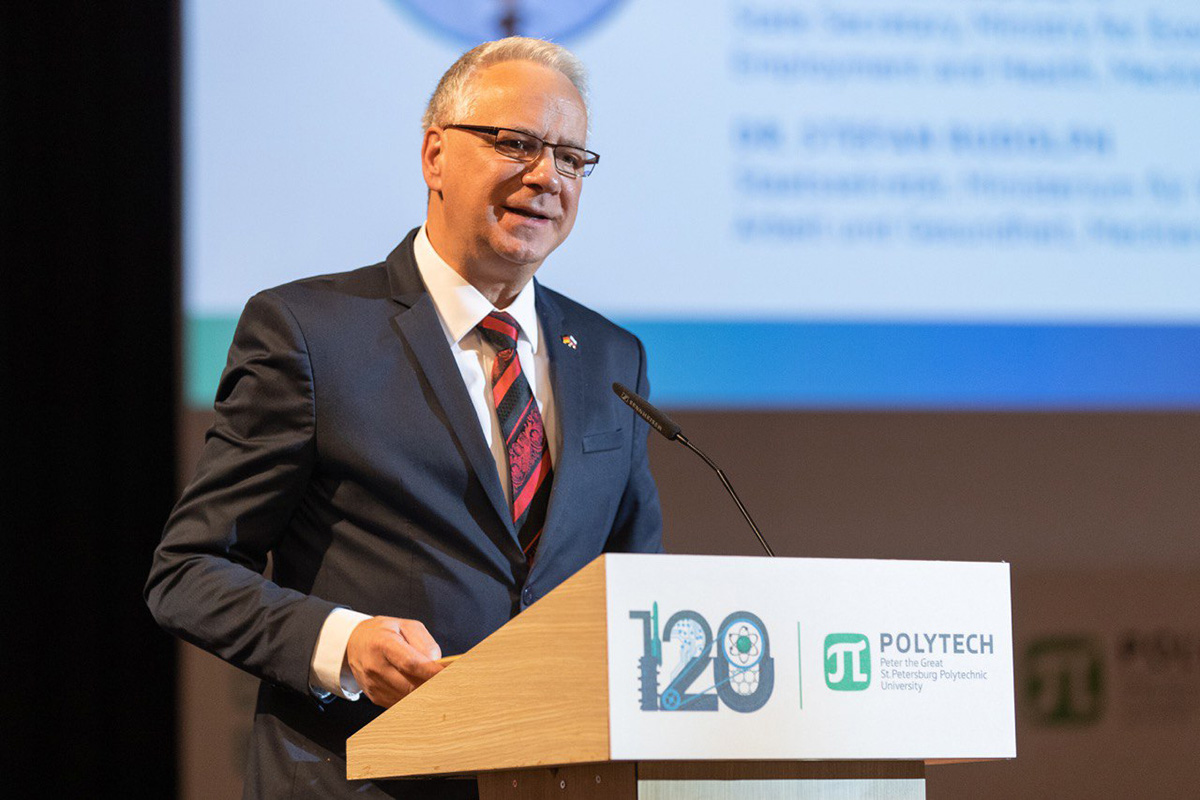 “Several years ago Rossotrudnichestvo entered into a partnership agreement with the Polytechnic University. We understood that this is a leading engineering university in the country contributing to developing higher education and science in Russia and at the same time advocating the internationalization of these areas, ”commented Deputy Head of the Federal Agency for CIS Affairs, Compatriots Living Abroad, and International Humanitarian Cooperation Pavel SHEVTSOV. He expressed his thanks to SPbPU for the assistance provided in organizing the international educational exhibition “Study in Russia” in 2019 at the Russian House of Science and Culture and offered polytechnics in the future to hold forums not only dedicated to anniversaries, but on the regular basis. In turn, the organizers express their gratitude to the representative of Rossotrudnichestvo Pavel SHEVTSOV for the support in holding the Forum "Polytech Days in Berlin." 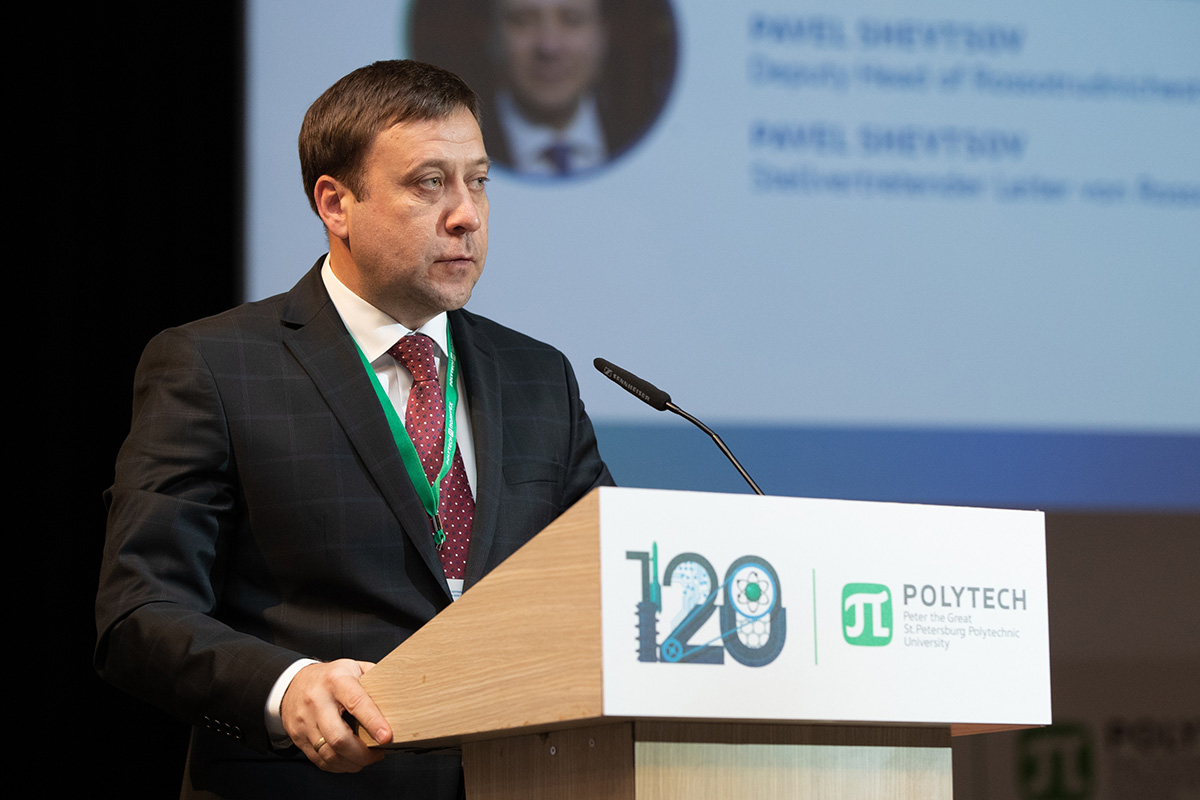 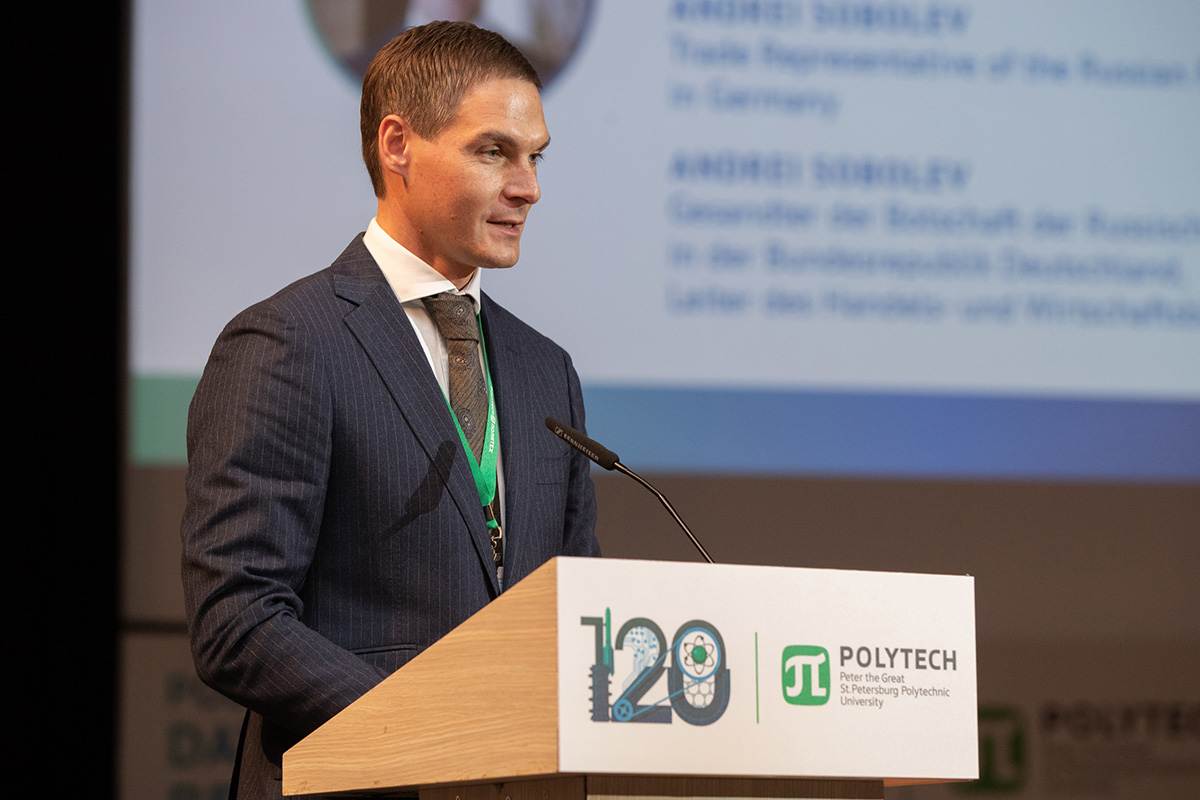 Andrei SOBOLEV, Trade Representative of the Russian Federation in Germany noted that Berlin had already seen the results of the joint work of specialists of industry and science represented by the Ministry of Industry and Trade, foremost manufacturing enterprises and Polytechnic University. He brought the example of how, as part of a state visit by the RF President, a modern Aurus car (the Cortege project) was driving through the streets of Berlin. In this project (the Project’s lead contractor is FSUE NAMI), Polytechnic University engineers worked on the development of the support framework of the body, hinged elements, doors, the trunk, the hood, transmission transfer support, etc.

The Grand Opening ceremony as well included welcome speech by the Head of the Contact Office for small and medium businesses in Russia; German Eastern Business Association Jens BÖHLMANN and the President of The Association of European Chambers of Commerce and the Eurochambres Industry Dr. Christoph LEITL. 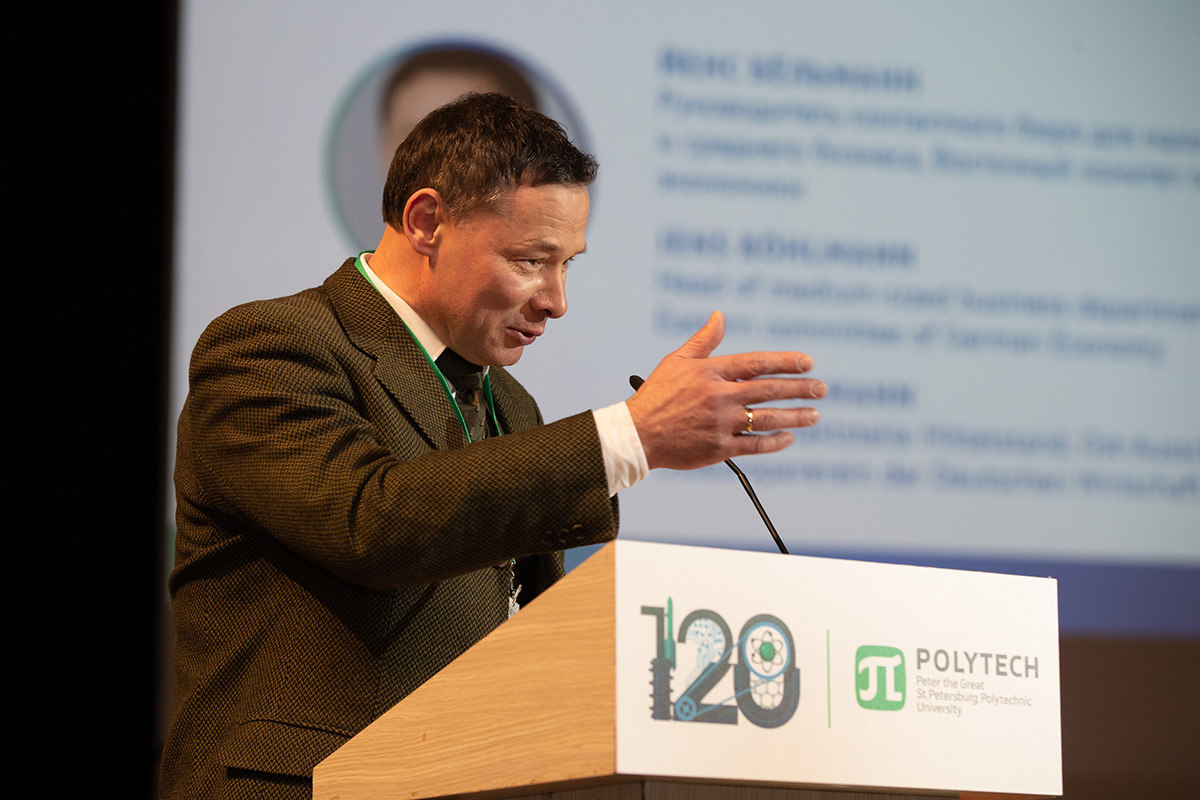 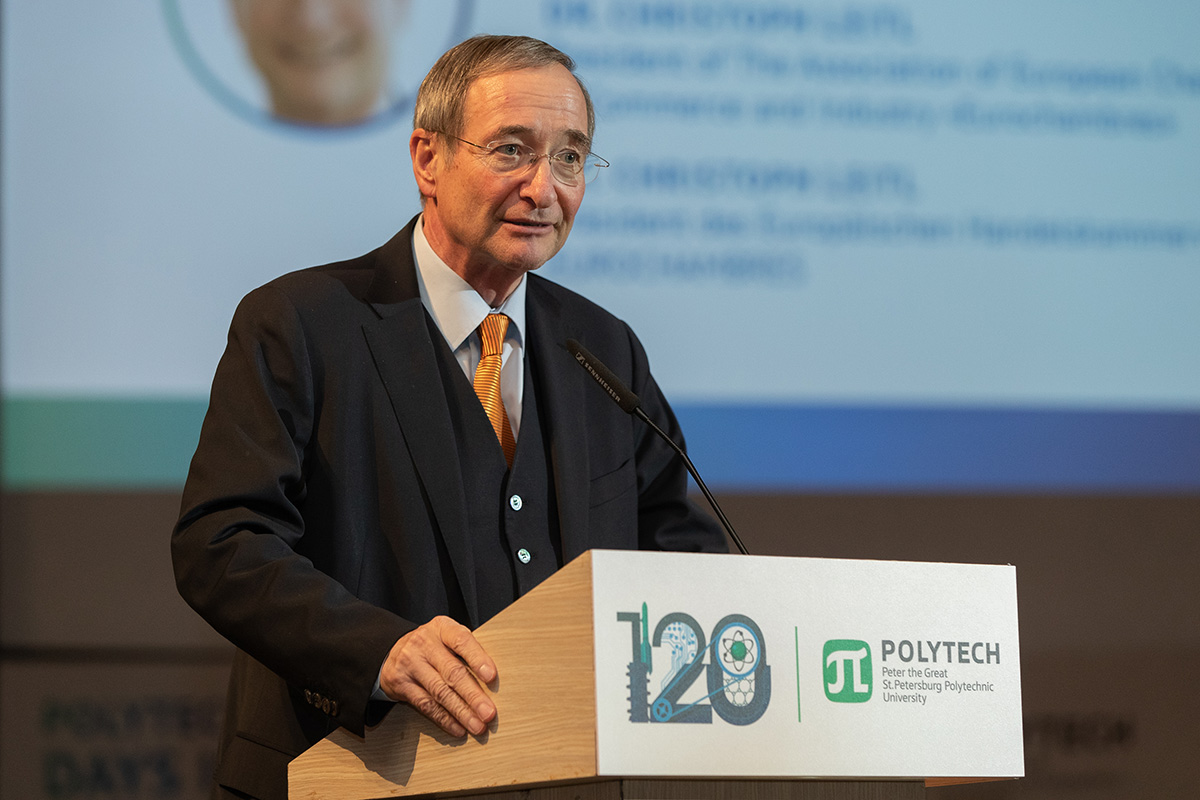 The Secretary of SPbPU Academic Council Vladislav ZHIVULIN delivered a welcome speech addressed to the forum participants from the First Deputy Minister, Ministry of Science and Higher Education of the Russian Federation Grigory TRUBNIKOV. The welcome address included the following: “The University over the years of its existence has become one of the supporting pillars of the Russian-German scientific and educational bridge that is sure to develop links between our countries. Many initiatives of the Peter the Great St. Petersburg Polytechnic University are pioneering in nature and can serve as examples of the excellent organization of international educational, scientific and innovative dialogue.” 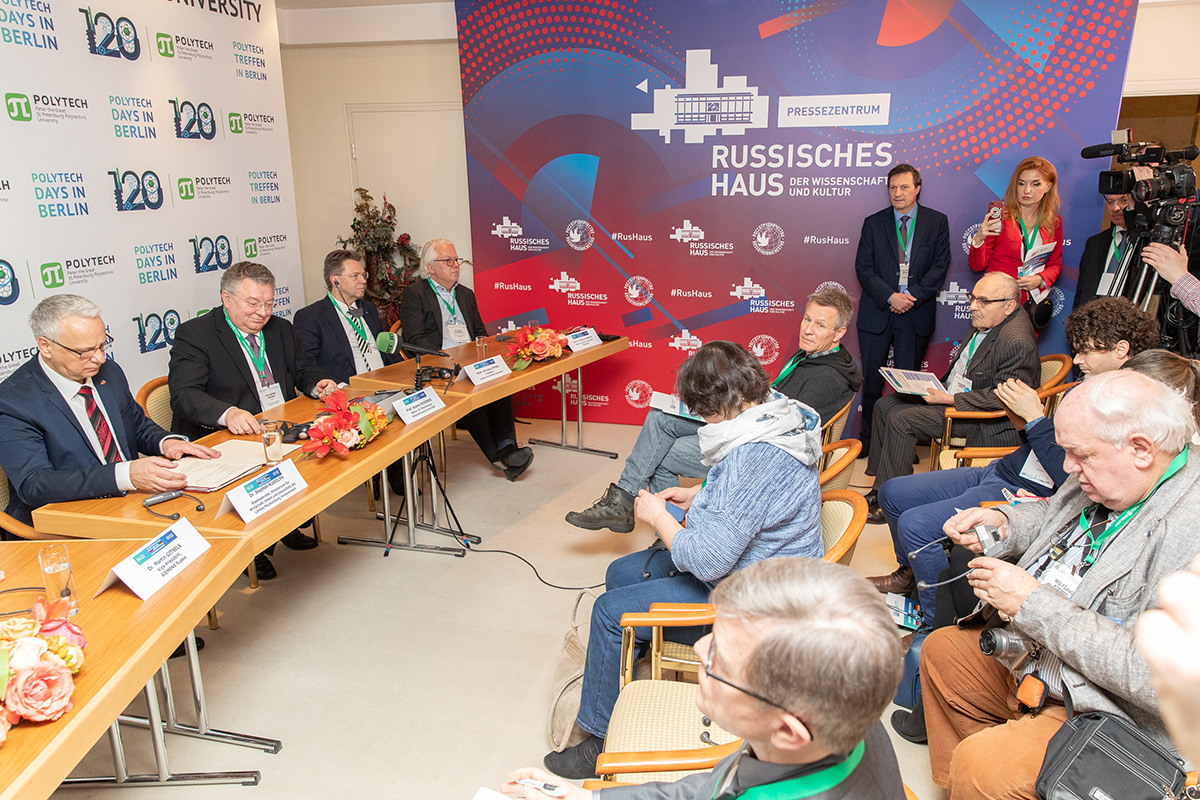 The Days of Polytechnic University in Berlin aroused great interest among the media, both Russian and German. After the opening ceremony of the forum, a press conference took place, where participants outlined the role of Polytechnic University developments for German industry. The speakers were Andrey RUDSKOI, Christoph LEITL, Stefan RUDOLF; Prof. Volker EPPING, President of Leibniz University of Hanover; Dr. Martin GITSELS, Vice-President of Siemens LLC and Prof. Holm ALTENBACH, foreign member of the Russian Academy of Sciences, Managing Director of the Institute of Mechanics; Otto-von-Guericke-Universität Magdeburg. Reporters from Channel One, RBC, Russia Today and others Russian media outlets and many German media, including the Russkij Berlin radio and the TV Berlin channel took part in the press conference. 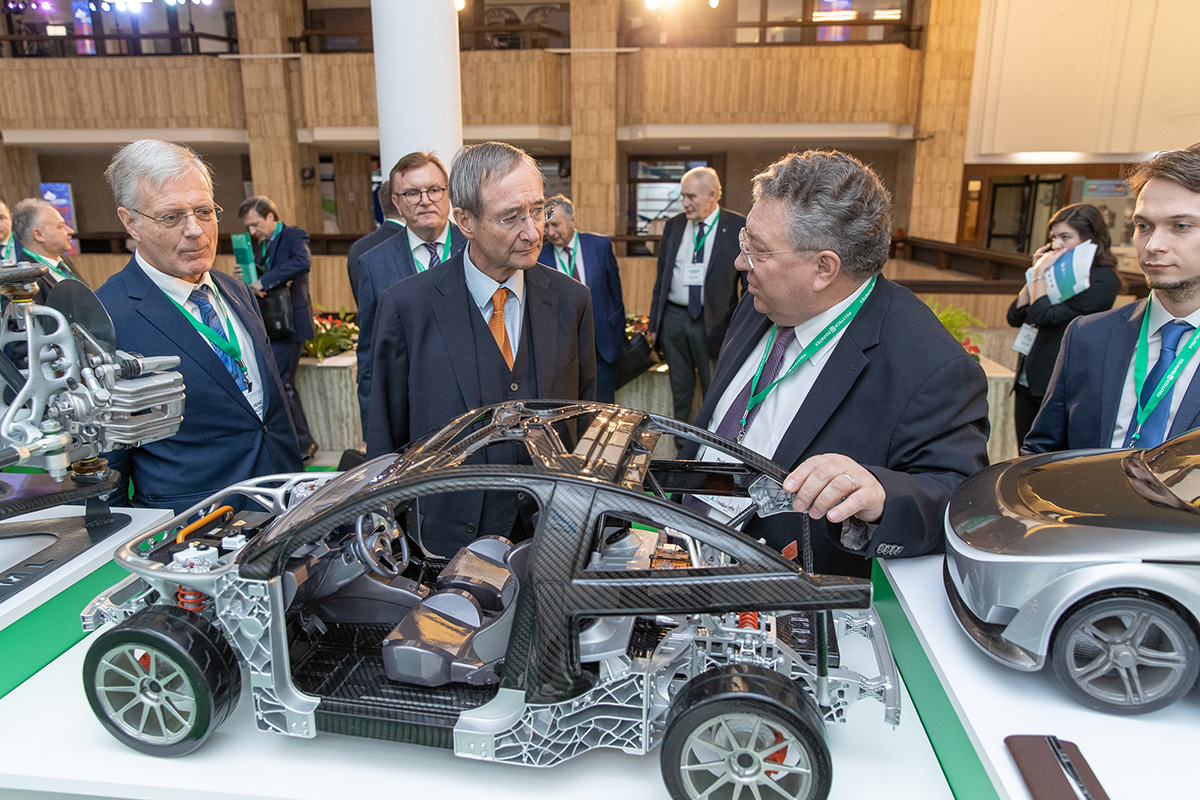 Also, an exhibition of Polytechnic University developments was opened this day. It presents exemplars of digital design and modeling of globally competitive next-generation products produced with the use of advanced manufacturing technologies. The exhibition stands also include university projects developed in cooperation with its key partners: the foremost universities and companies from Germany, Austria, Great Britain, France, with which Polytechnic University cooperates in the field of artificial intelligence, the development of new materials, energy, information technology, microelectronics, biomedicine and biotechnology.