On 15th October 2015 the international seminar “Fundraising: Partnership with German Scientific Foundations and Organizations” was held at Peter the Great St. Petersburg Polytechnic University. The seminar had been organized together with the German Houses of Research and Innovation (DWIH) as part of 5-100-2020 Project and a series of international seminars of SPbPU devoted to best practice sharing, and it was aimed at developing partnership and involving scientists and professors of the Polytechnic University into new research projects implemented together with German universities. 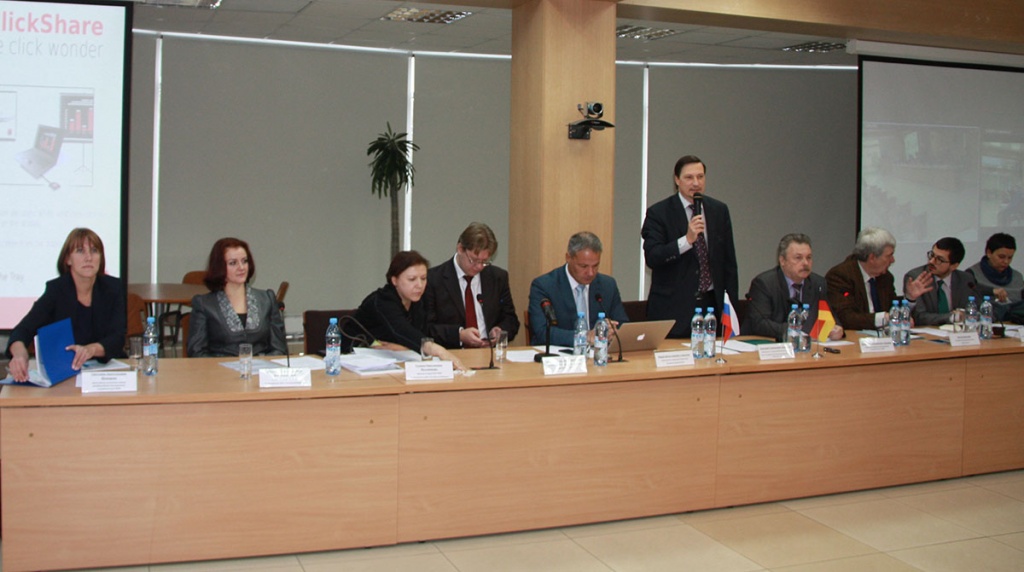 The following persons took part in the seminar: Yu.V. Simachev, Deputy Director General of the Russian Science Foundation (RSF), I.G. Protsenko, Head of the Unit for Competitions Organization at RSF, S.A. Shevereva, Deputy Director of the Department for International Bilateral Cooperation of the Russian Foundation for Basic Research (RFBR), Irek Suleimanov, foundationer of the Federal Chancellor, a representative of the German Academic Exchange Service (DAAD) in Moscow, Gregor Berghorn, Director of the German House for Research and Innovation (DWIH), G.N. Melnikova, Supervisor of the Competition DGF-RFBR run by the office of DGF in the Russian Federation, N.A. Dobrovolskaya, Supervisor of the Competition DFG-RSF run by the office of DGF in the Russian Federation, E.I. Eremenko, Ph.D. in Philological Sciences, Head Moscow Office of the Helmholtz Association. The event included online broadcasting in which German universities partners of SPbPU took part (the Technical University of Munich and the Brandenburg University of Technology).

The main topics of the Seminar: “Fundraising: Partnership with German Scientific Foundations and Organizations” was cooperation with the German academic circles including participation in the international research and education projects supported by national foundations.

Cooperation without borders is the main achievement of today’s science. Scientists join their efforts to face the main challenges of the present day society concerning fundamental science, advanced technologies, environmental problems, fighting diseases and many others. According to Yu.V. Simachev, Deputy Director General of RSF, nowadays science is interested in human beings mainly and research is becoming closer to modern life. Yy.V. Simachev believes that only international cooperation can result in effective solutions. 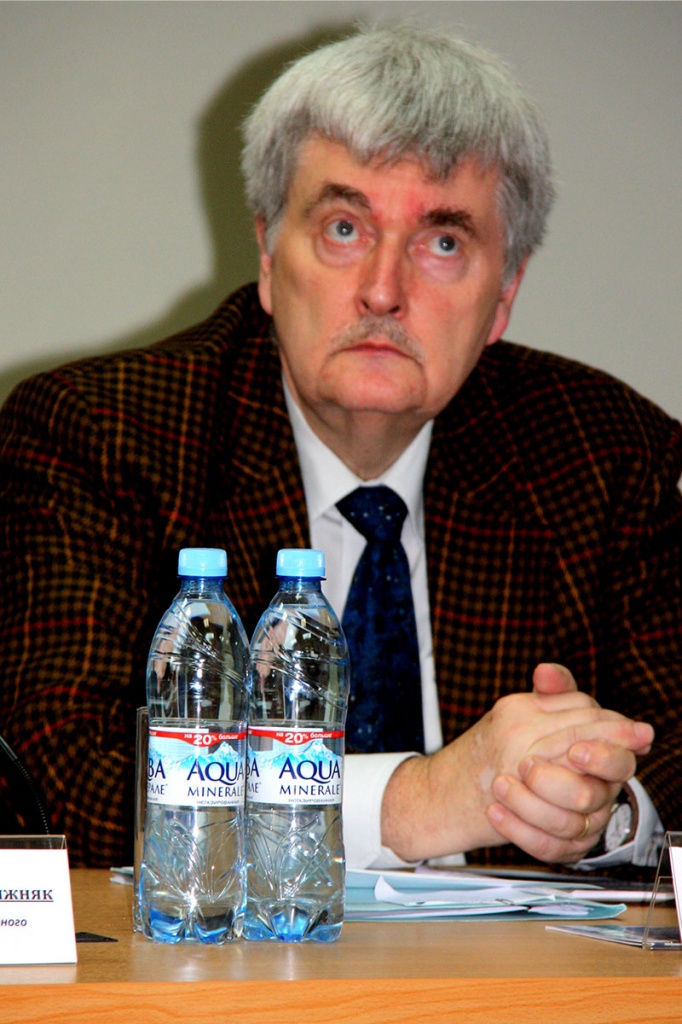 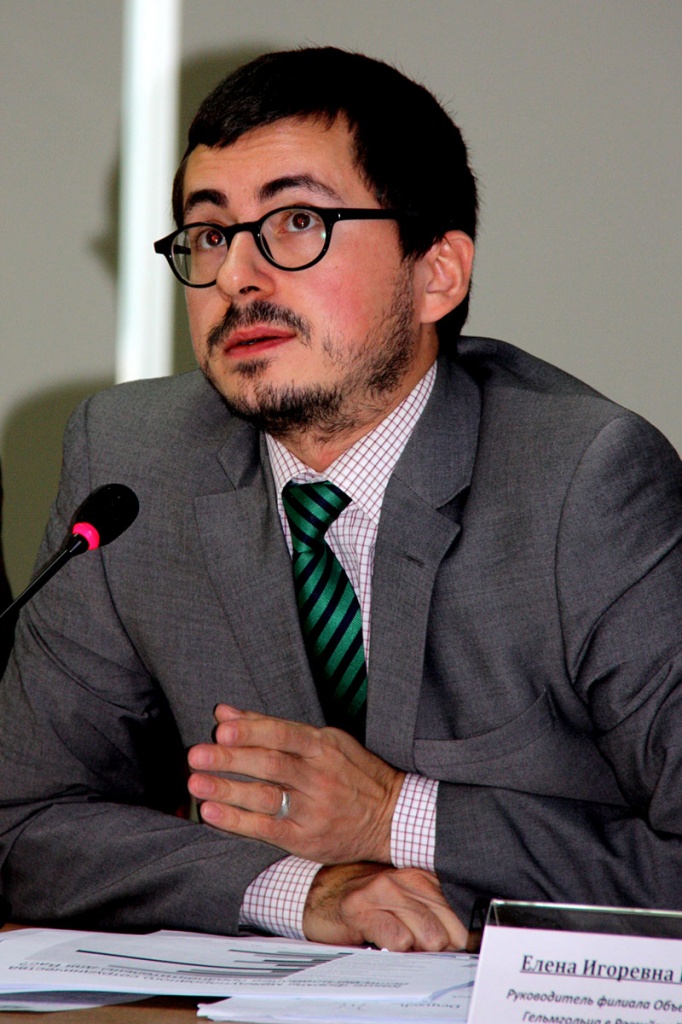 Indeed, universities conducting innovative research can guarantee that their students will be successful on the global labor market. Advanced and promising experiments help to bring stability to regions in crisis. The competence and innovative potential of Russian and German universities and research organizations enables carrying out joint research in most challenging areas, setting up joint educational programs, and developing academic mobility of students, postgraduate students and professors. These are the main areas of the modern interuniversity policy aimed at creating an alliance of loyal partners and achieving success.

D.G. Arseniev, Vice-Rector for International Relations, made a speech at the beginning of the seminar emphasizing the unanimous wish to build contacts in the sphere of international research and education. “We have signed more than 40 cooperation agreements with German universities. On 6th October the conference for rectors of the leading Russian and German universities took place in Bonn, Germany, in which A.I. Rudskoy, Rector of SPbPU, took an active part. The conference was devoted to modern tendencies concerning the development of universities. It should be mentioned that SPbPU has close ties with German research centers and industrial companies. We are developing cooperation in the sphere of education. Owing to the German Academic Exchange Service our program of strategic partnership with Gottfried Wilhelm Leibniz University of Hannover has been granted support. I am happy that today professors and scientists cooperating with their German colleagues have gathered here. The promising areas of joint research include the following ones: nanomaterials, mechanics, computer engineering, nano- and biotechnologies, physics and so on. I am sure that our joint developments will become great achievements. I would like to wish success and a great number of interesting projects to all participants”, said D.G. Arseniev.

The speakers demonstrated their presentations devoted to the issues of cooperation between research foundations from Russia and Germany.

The principal aim of RSF is to support fundamental and exploratory research and it is financed generously. The Foundation accepts applications in all areas of knowledge and a lot of attention is paid to young scientists. There are certain standards research has to conform to. All results have to be generally available. “We are open for cooperation and we continue to think about the new cooperation mechanisms and promising projects. RSF constantly works with foreign experts. International cooperation is the main issue for us. At the end of 2014 Germany became our strategic partner. I am grateful to the Polytechnic University for organizing this international seminar”, commented Yu.V. Simachev.

“I am very happy to take part in this seminar. In spite of the political tensions in the world academic community is sure to maintain a steady professional relationship. Today we can see here the representatives of respectable organizations that highly appreciate the achievements and contribution of Russia towards the global system of developing science and education. A scientist is always a citizen of the world who wants people to unite and every discovery is a step towards great changes and the future of humanity. The representatives of business community and research and education organizations should have a clear vision of their tasks and mutual expectations. The goals have to be clear, realistic and feasible and be in line with the interests of all participants, that is why the parties should have a comprehensive plan in which time, finance and so on are taken into account. They will have to put this plan into practice together bearing in mind that mutual trust is based on transparent intentions and it does not arise immediately but as cooperation develops”, explained Gregor Berghorn, Heag of DAAD Moscow office. 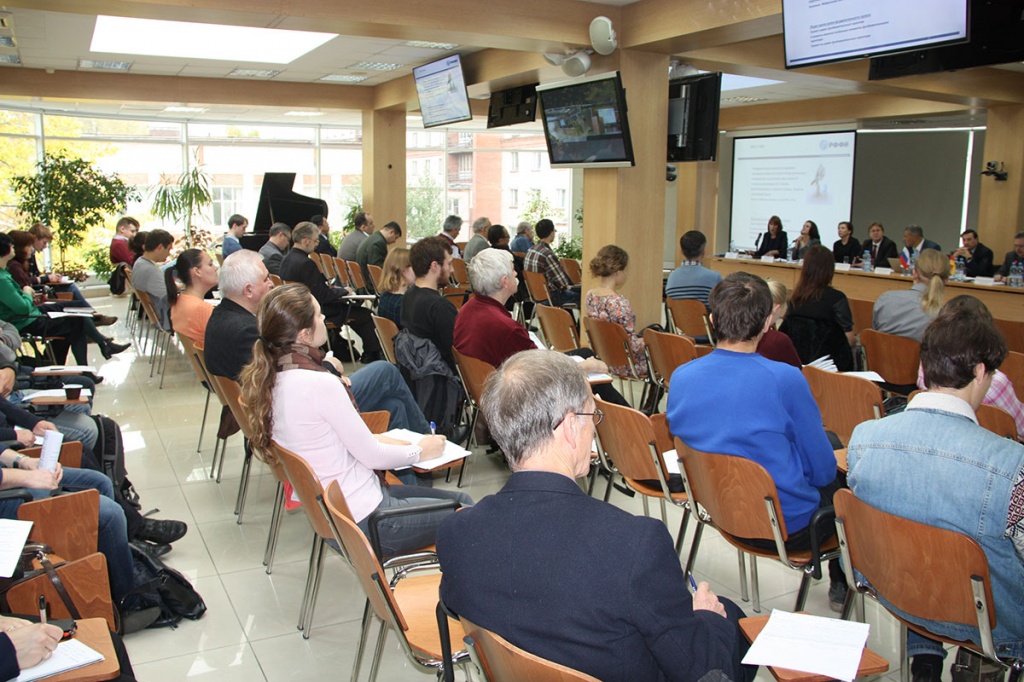 E.I. Eremenko, Head Moscow Office of the Helmholtz Association, spoke about the main tasks and priorities of the Association. Its main aim is to find practical application of research results, introducing them into market and forming an interdisciplinary approach.

Helmholtz-Russia Joint Research Groups are set up in order to strengthen scientific cooperation between the research centers of the Helmholtz Association and Russian research organizations and universities so that new impulses appear in the existing, as well as planned research programs. Postgraduate studies organized by the Helmholtz Association are large international bodies collaborating with universities and offering a great number of topics and subjects to study.”Studying science is again in great demand today. Science is the heart of the world. The future of the whole planet depends on the researchers’ achievements. We are for making the job of a scientist more popular. It is worth mentioning that nowadays more and more women are building their careers in science. We create favorable conditions for women who would like to continue research after becoming mothers”, said Elena Eremenko.

Irek Suleimanov told the participants of the seminar about the results of a large-scale research into the issues of cooperation between Russian and German universities. According to the results, German universities are interested in collaborating with Russian universities. They are ready to participate in academic mobility programs, to create joint projects and invite students and lecturers to apply for internships.

Each report aroused a great interest and a lot of questions were asked. All participants of the meeting were able to obtain information about applications during individual meetings.

The seminar “Fundraising: Partnership with German Scientific Foundations and Organizations” enabled colleagues and partners to communicate efficiently. We are sure that it will serve as an impulse for collaboration between our scientists and their German colleagues supported by Russian and German national research foundations.

The materials of the seminar and the main presentations can be found on the tab “Useful Information” in the section “International Projects” on the website of the Polytechnic University: http://www.spbstu.ru/international-cooperation/international-activities/international-project/useful-information/