On May 29, Sir Paul CURRAN, President of the City, University of London, was awarded the title of an Honorary Doctor of SPbPU. In June 2018, by the unanimous decision of the Academic Council of the Polytechnic University, Sir Paul CURRAN was awarded the SPbPU Honorary Doctor title for his contribution to the development of cooperation between universities. The ceremony of awarding the gown and diploma was held on 29th May, 2019. 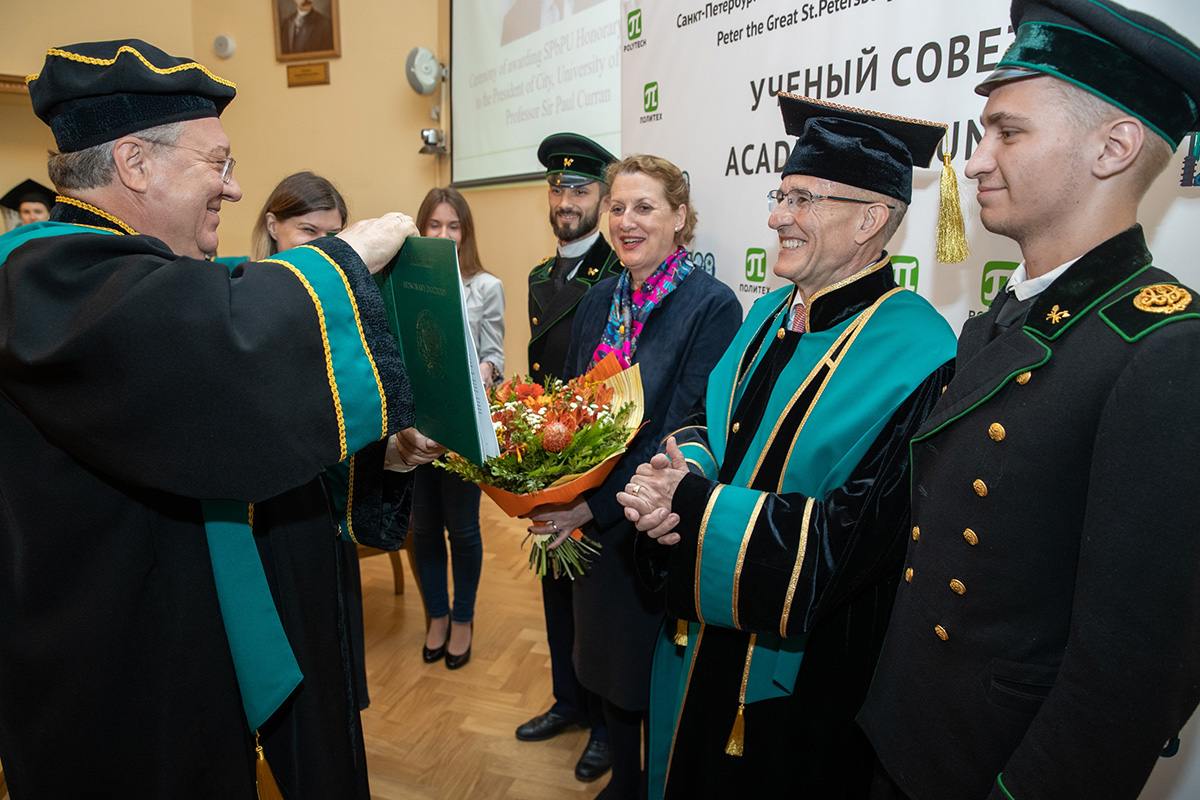 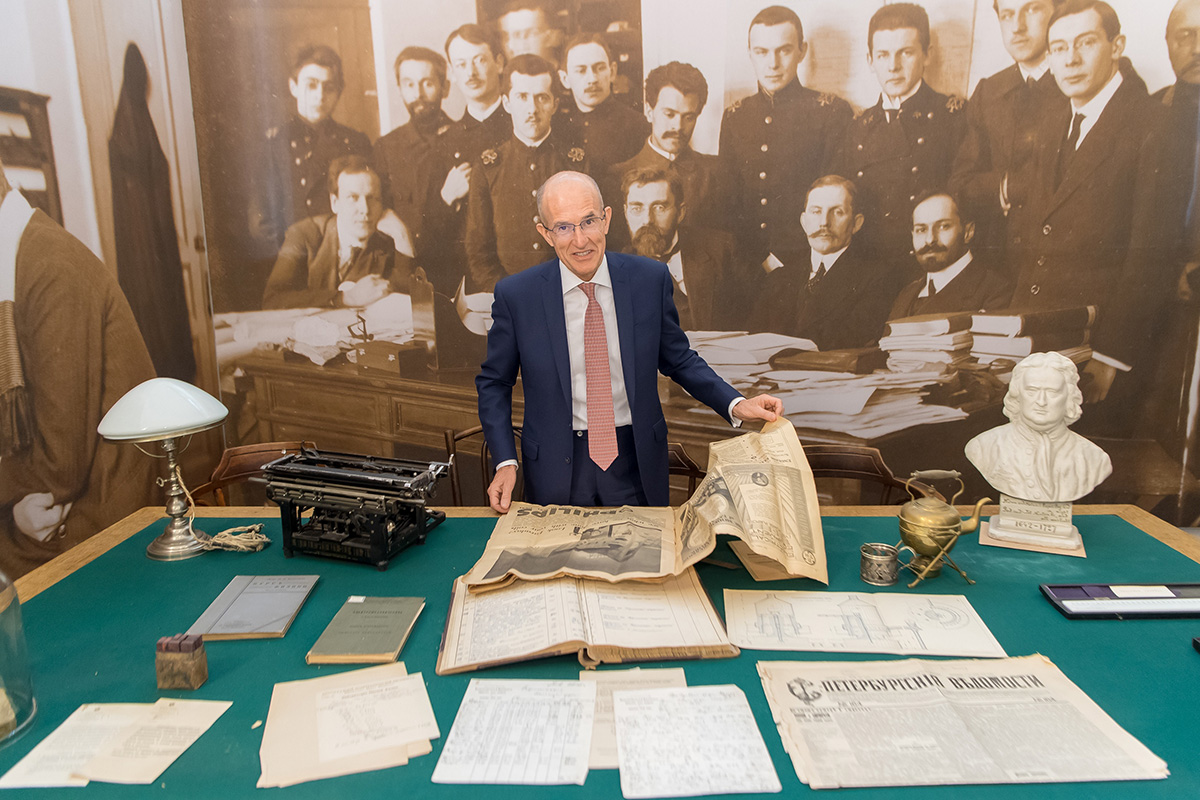 The day began with an excursion to the SPbPU Museum, which is dedicated to the 120th anniversary of the university. Paul CURRAN noted that two universities are similar in their history: “It was very touching to see this museum, because the early days of your institute are very similar to our first days. Different countries, different political conditions, but very similar academic life of universities. Our university was founded in 1894 - only five years earlier than yours, and we started by developing courses in engineering programs. Our years of development right up to the First World War are very similar, judging by the photos I saw there. It looks as if they are the same people, just a little bit elsewhere”. 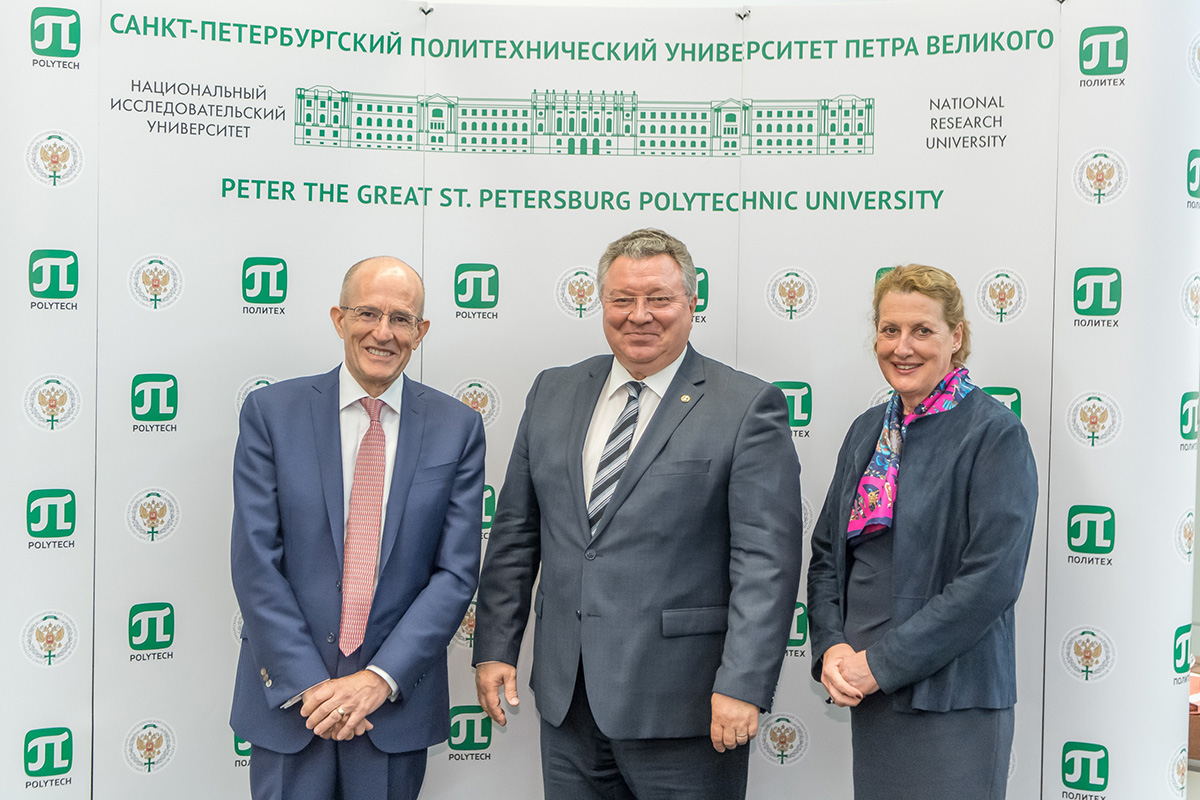 After the tour of the SPbPU Museum, a meeting was held between Sir Paul CURRAN and his wife with the Rector, Andrei RUDSKOI. The meeting also involved the Secretary of SPbPU Academic Council Vladislav ZHIVULIN and SPbPU Vice Rector of for International Relations Dmitry ARSENIEV. Andrei RUDSKOI admitted that the consent of Sir Paul CURRAN to become an Honorary Doctor of SPbPU is a great honor for our university. He noted the high efficiency of cooperation between the two universities: “For 50 years we have shown increasing rates of interaction between our universities, especially over the past seven years under your leadership at the City, the University of London, the relations between our universities have become even better”. During the meeting the current areas of cooperation were discussed, as well as future plans for joint work of universities. 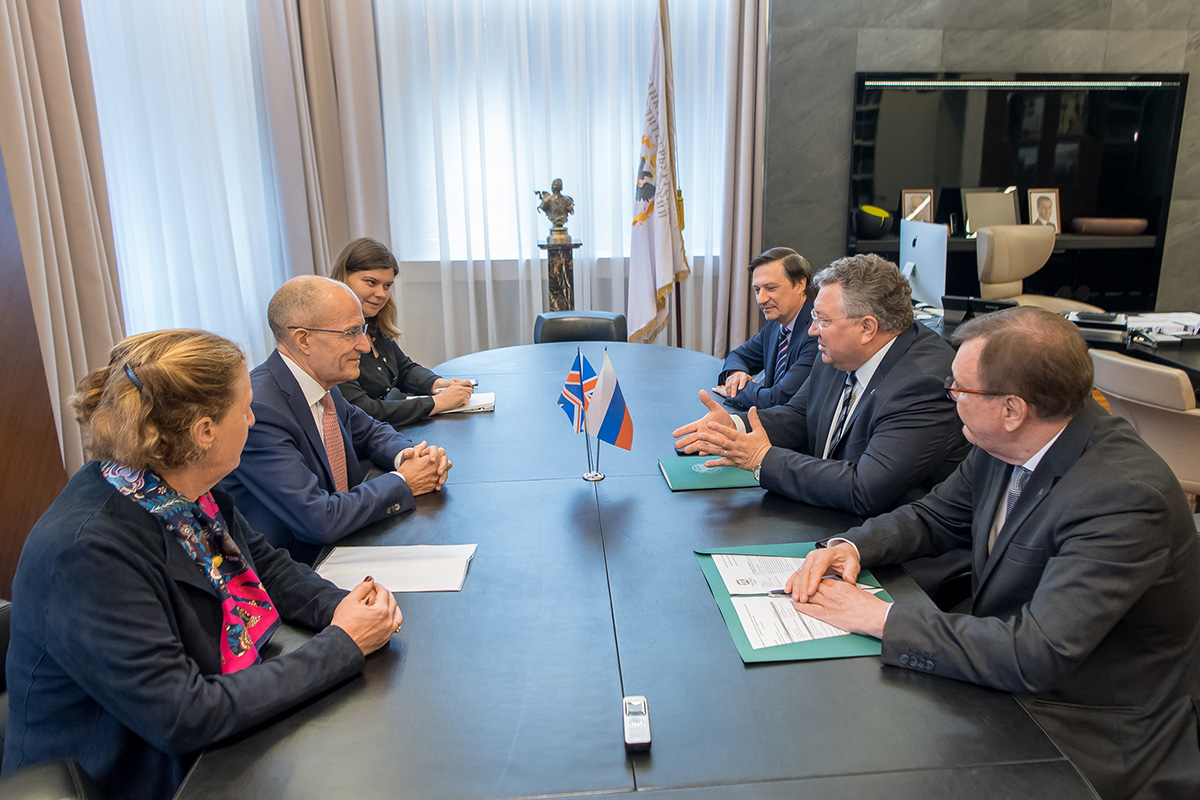 SPbPU Rector noted that in August this year the Polytechnic University would be happy to meet again with a delegation from the City, the University of London at the WC2 Symposium. It was proposed to bring the event to the level of the “Scopus” database conference and publish a collection of articles based on its results, which will include the work of research groups and young scientists from leading universities in the world. In addition, Andrei RUDSKOI invited students from the City, University of London to participate in SPbPU educational programs and expressed the idea of supporting youth activity through student unions and student design bureaus. 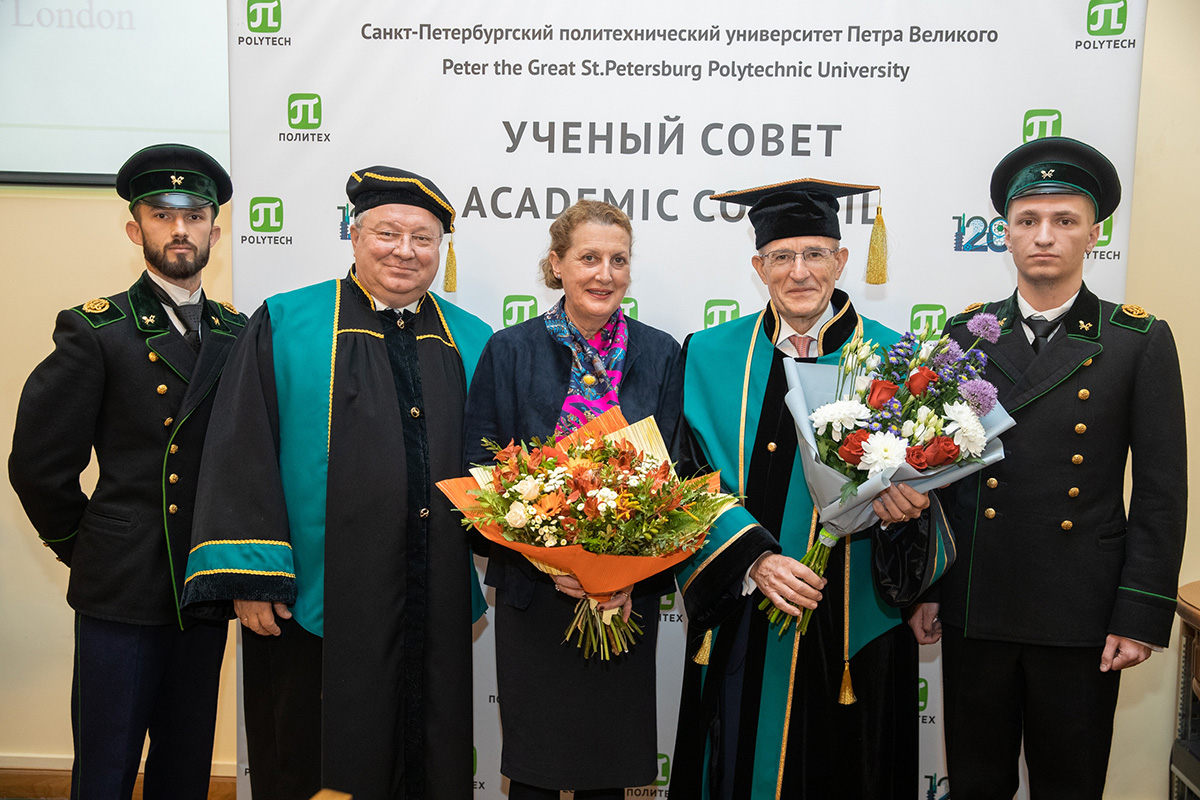 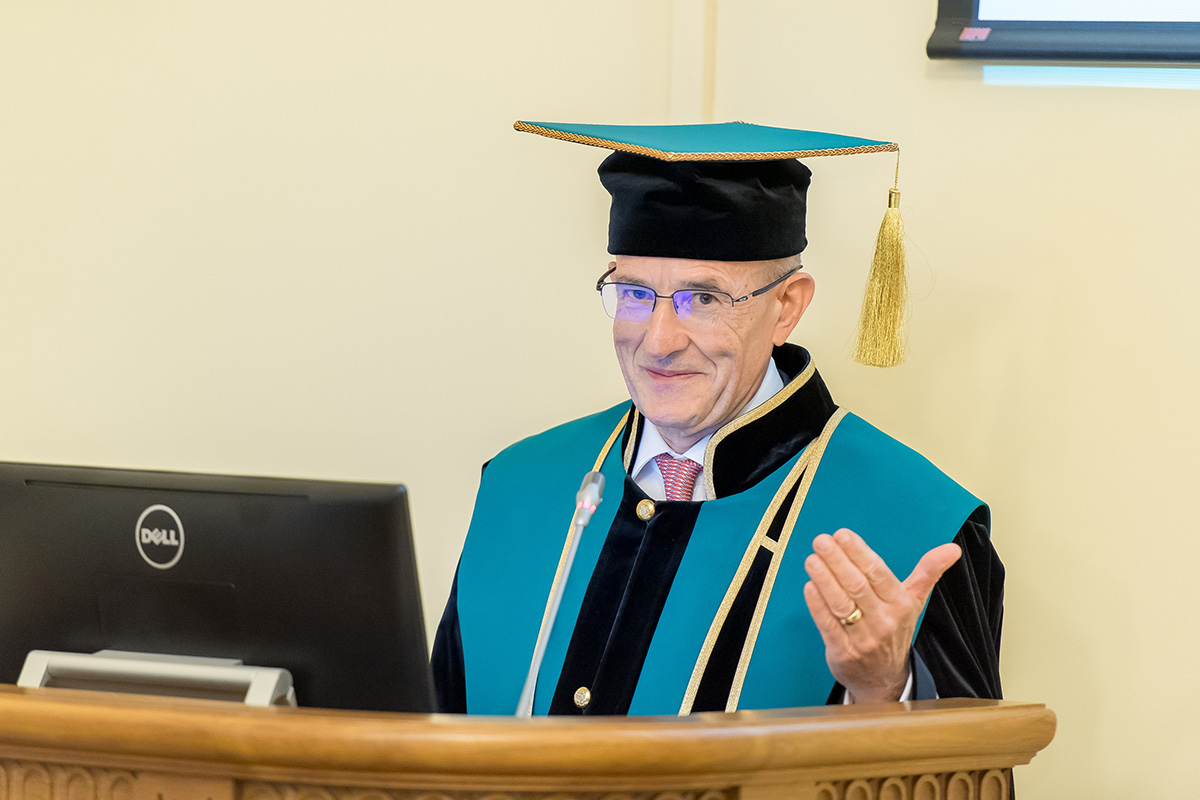 In his speech, Sir Paul CURRAN expressed his gratitude for the award of the title of SPbPU Honorary Doctor and congratulated the Polytechnic University on its 120th anniversary. The professor noted that SPbPU is a key player of the City, University of London in Russia and underlined the following: “I am confident that colleagues here will continue to work in order to contribute to an outstanding academic community in which scientists and students can develop further and reach peaks in the framework of the Project “5-100-2020 ” as well as continue to work in research and education with outstanding partner organizations around the world”.

SPbPU Rector, Academician of the Russian Academy of Sciences Andrei RUDSKOI once again congratulated Sir Paul CURRAN and said that the Polytechnic University and the City, University of London are going to develop and enhance cooperation further.

The material was prepared by the SPbPU Media Center.