Days of SPbPU in Spain and information center launch

The Madrid delegation visit involved a series of meetings with the staff of some of the university departments. Among them were negotiations with the representatives of the International Relations Department of SPbPU, the Institute of Civil Engineering, and the Institute of Metallurgy, Mechanical Engineering and Transport.

Vice-rector for international relations Mr. D. Arseniev reminded of the SPbPU’s long-standing partnership with more than 300 international universities. Among them are 9 Spanish universities including the Technical University of Madrid (hereafter referred to as UPM), the Polytechnic University of Valencia, Autonomous University of Barcelona, and others. Mr. Arseniev outlined tasks faced by the two universities and proceeded with the identification of the areas in which the cooperation can take place. Two events are thought to be of utmost importance for the time being - the SPbPU Days at UPM that will take place in April and the opening of the Information Center in Madrid. “Our choice of Spain as a location for the Information center was not random - it provides an opportunity for direct interaction with the Spanish-speaking community. Being the top university in Spain UPM is a home to this community. By taking this step we embark on a long journey to explore such priority regions as the countries of South and Central America including our essential BRICS partner - Brazil,” – claimed Mr. Arseniev.

As the meeting progressed the interim academic cooperation between the universities was brought into focus. The UPM delegates approved of the proposals made by the Russian partners pointing out the importance of identifying common goals in the research activity and confirmed their willingness to establish a SeedFund which major purpose will be to encourage international collaboration. Both parties showed great interest in industry and civil engineering, telecommunications, intelligent systems and robotics. One of the highlights of the meeting was the promotion of disciplines in humanities. An agreement was achieved to run a workshop for the Russian language teachers working at “Alexander Pushkin” foundation during the SPbPU Days at UPM. 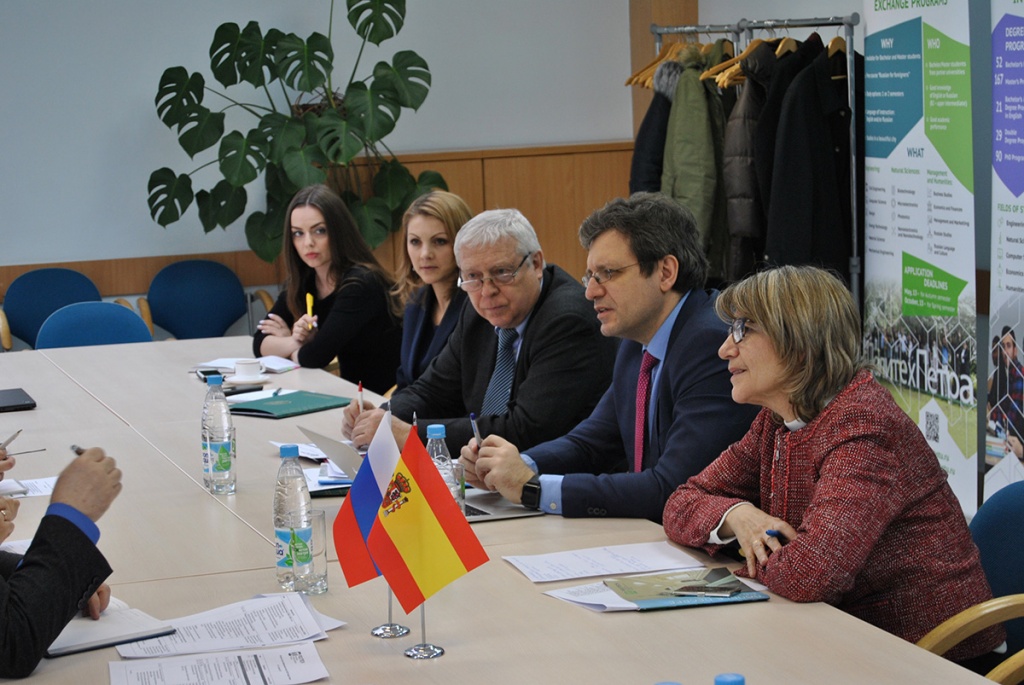 Being aware of the SpbPU’s status as the Russia’s leading university for international programs and projects (Tempus/Erasmus+) the UPM representatives expressed their interest in developing cooperation in this field. The parties expressed mutual interest in establishing student exchange and double degree programs and launching joint projects.

One of the fields of international collaboration which proved to be of great interest to the Spanish colleagues is Civil Engineering. This interest prompted a meeting with the director of the SPbPU Institute of Civil Engineering Mr. N. Vatin. As he reported later, a decision was made to develop an English double degree program in “Civil Engineering “ in cooperation with the UPM and carry out scientific research in the field of nanomodified concrete. Research papers will be published in the “Civil Engineering Journal” (Scopus indexing database).

During the visit to the department of science and research the attention of Mrs. Dolores Ajates Abellan , expert of the international office of UPM, was drawn to the exhibition featuring works by students of the department “Engineering graphics and design”. The visit was hosted by the Head of the department Mr. V. Ivanov who discussed the possibility of taking the exhibition over to Madrid for the SPbPU Days. One part of the exhibition composed of works related to industry design, graphics, photography, information and scientific design is going to be housed in the UPM administrative headquarters, the other one will be located at the Institute of Architecture, Civil Engineering and Technology.

The Technical University of Madrid holds the top position among Spanish universities thanks to more than 40 Bachelor, 78 Master, 41 PhD and 91 double degree programs offered (including joint degree programs with the Massachusetts Institute of Technology, considered one of the best universities in the world). Total number of student is over 40 thousand people, the teaching and administrative staff number is about 5 thousand.