Consul General of Israel in St. Petersburg Michael LOTEM strongly believes that relations between countries are based not only on governmental contacts. "What is important and useful is cooperation in private and public sectors, it is essential to develop economic, cultural, educational and scientific relations", - stated the Consul General of Israel in one of his interviews. No wonder that the recent visit of Michael LOTEM to SPbPU is the third one. Nevertheless, the delegation of the Ariel University arrived at the Polytechnic University for the first time. 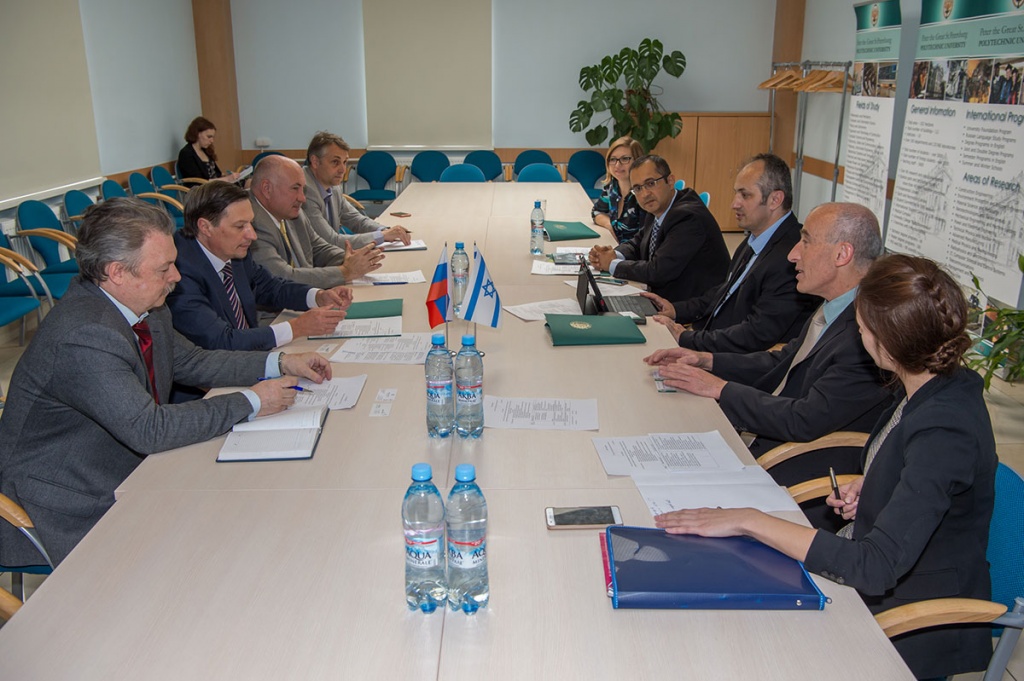 Initially the visitors from Israel were greeted by SPbPU Vice-rector for International Relations D.G. Arseniev. He made a presentation of the Polytechnic University for the guests and talked on main events held within the cooperation between the University and the Consulate, and within the interuniversity cooperation between the two states. "The Polytechnic University has intensified cooperation with Israel since 2010. This period has been marked by a number of joint workshops in the area of nuclear physics and engineering, - says D.G.Arseniev, - it is the third tome when we have participated on the Exhibition of International Education in Tel Aviv, students from Israel study at the Polytechnic University at various Institutes and in different majors". The Head of the International Relations Office V.D. Khizhnyak added that during the events scientists were able to share ideas, accomplishments and research results. The next stage of the cooperation will be building the collaboration system and creating the information environment for further partnership. These were the issues to discuss at the meeting held in SPbPU Supply Center for International Activity. 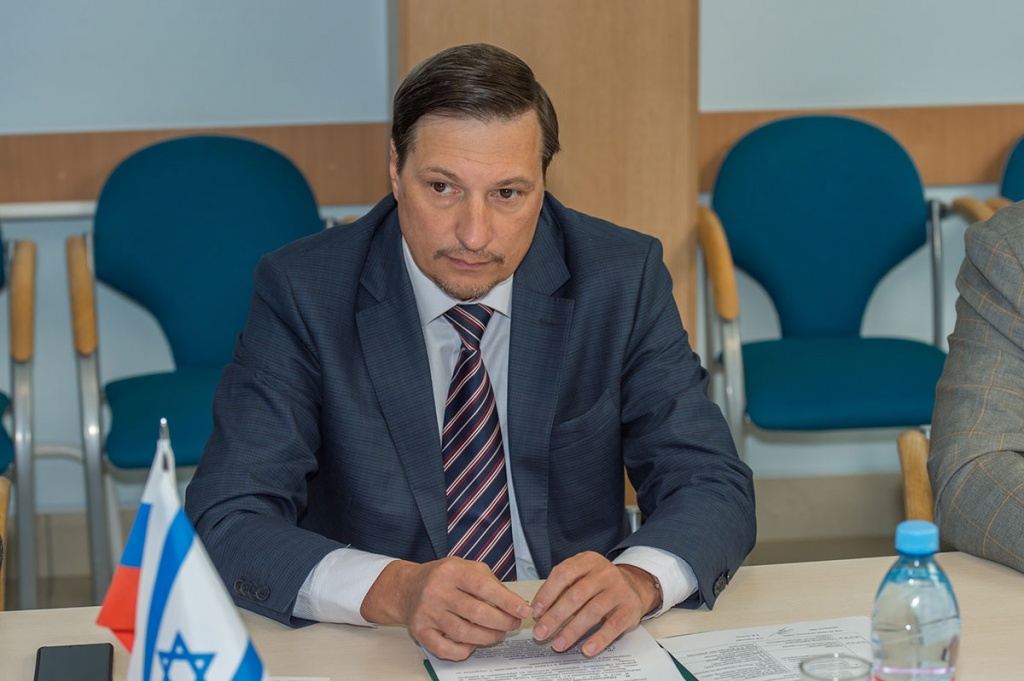 The Ariel University, Israel, was represented by Prof. Albert PINHASOV, Vice President and Dean of R&D, and Prof. Yitzhak MIKHAILOVSKY, Dean of the Department of Molecular Biology.

Speaking perfect Russian, Prof. Albert PINHASOV presented the Ariel University. In 1982 this University was founded as a college, which later turned into a university due to the work of highly professional staff. "We are a young university, we have a lot-of ambitions. This is one of our advantages, - explains Albert PINHASOV. - In addition, most our professors speak fluent Russian, which makes our cooperation with Russian partners easier". 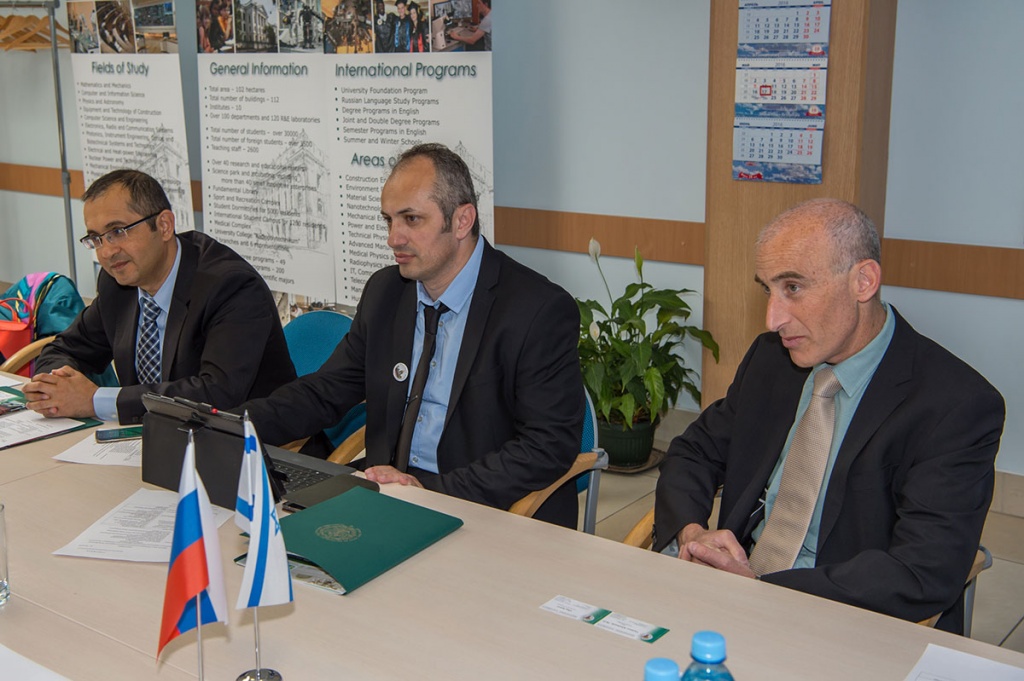 Apart from similar research fields, the Polytechnic University and the Ariel University have something in common: rectors of both Universities - A.I. Rudskoy and Michael Ziningrad - are great experts in material science, which allowed them to discuss opportunities of joint projects in the research of nanotechnologies in metallurgy. 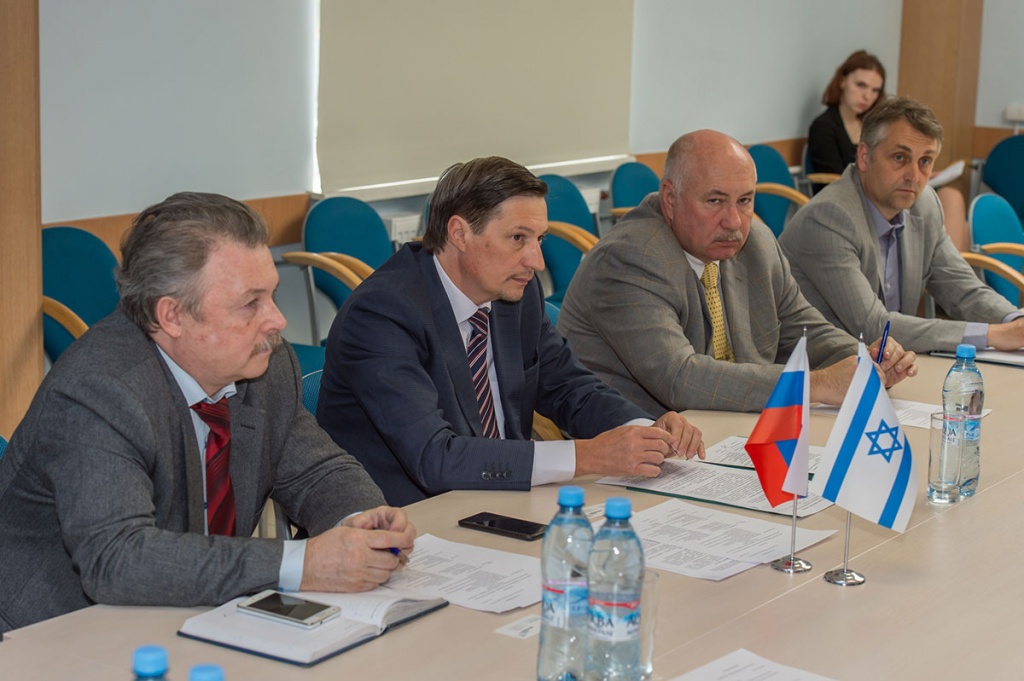 Attending the meeting, SPbPU Vice-rector for Research O.S. Ipatov and his Deputy V.V. Sergueev emphasized that the research activity of the Ariel University is of great interest for SPbPU scientists. "The Polytechnic University owns a range of laboratories that work in close cooperation with industrial companies, moreover, our researchers intend to commercialize their intellectual results", - said O.S. IPATOV.

O.S. Ipatov came up with the offer to embark on the exchange of professors between the two Universities in order to identify common research interests and fields of study. He also confirmed that the Polytechnic University was ready to collaborate with Israel's companies and foundations.

The representatives of the Ariel University were especially interested in inventions and developments of the Polytechnic University in the area of translational medicine. Obviously, the Israelian healthcare is considered one of the leading ones in the world. According to O.S. Ipatov, the Polytechnic University is doing serious research into medical physics, cell and molecular biology, therefore the negotiations on further cooperation between SPbPU and the Ariel University in medical engineering technologies continued in the Laboratory of Medical Ultrasound Equipment and the Laboratory of Molecular Neurodegeneration.