On April 21, 2018, the 6th Chinese (Shanghai) International Technology Fair (CSITF) has finished its operation. This year, more than 1000 hi-tech companies from 24 countries took part in this broad-scale event. It is to be recalled that Peter the Great St. Petersburg Polytechnic University along with the Government of St. Petersburg had presented a stand of innovation research developments.

During the entire fair, its participants were engaged in an intensive and diverse business program; the St. Petersburg delegation took part in many of the events. On April 19, 2018, a working session took place at the conference hall at the SPbPU stand; SPbPU and St. Petersburg Government representatives, along with a numerous delegation of the RF Consulate in Shanghai headed by the Consul General A.N. YEVSIKOV, representatives of the Shanghai Government and governments of PRC innovative provinces, leaders of Chinese companies and organizations took part in it. The participants asked questions which they were interested in and discussed possible options for cooperation. The leader of the Design Group of Shanghai Free Trade Zone United Development Co., Ltd., Carolina Ye Guo pointed out that presently the Corporation can sponsor financing innovation projects abroad and, despite the fact that this possibility had appeared not too long ago, more than 20 billion yuan have already been invested in foreign projects. Also, Carolina YUE encouraged Russian participants of the working session for future cooperation.

On April 19, 2018, a plenary session was held with support of the SPbPU Representative Office in Shanghai; representatives of SPbPU and St. Petersburg Government, along with Chinese companies and organizations took part in it. In the outcome of this event, the Center of Language Training for Master’s degree students of the Heilongjiang University and the Russian-Chinese Biomedical Center for Technology Transfer and Innovations were inaugurated; also, an agreement between SPbPU and SSDT (Shanghai Superior Die Technology), an affiliate of SAIC, the major Chinese motor manufacture, was signed. 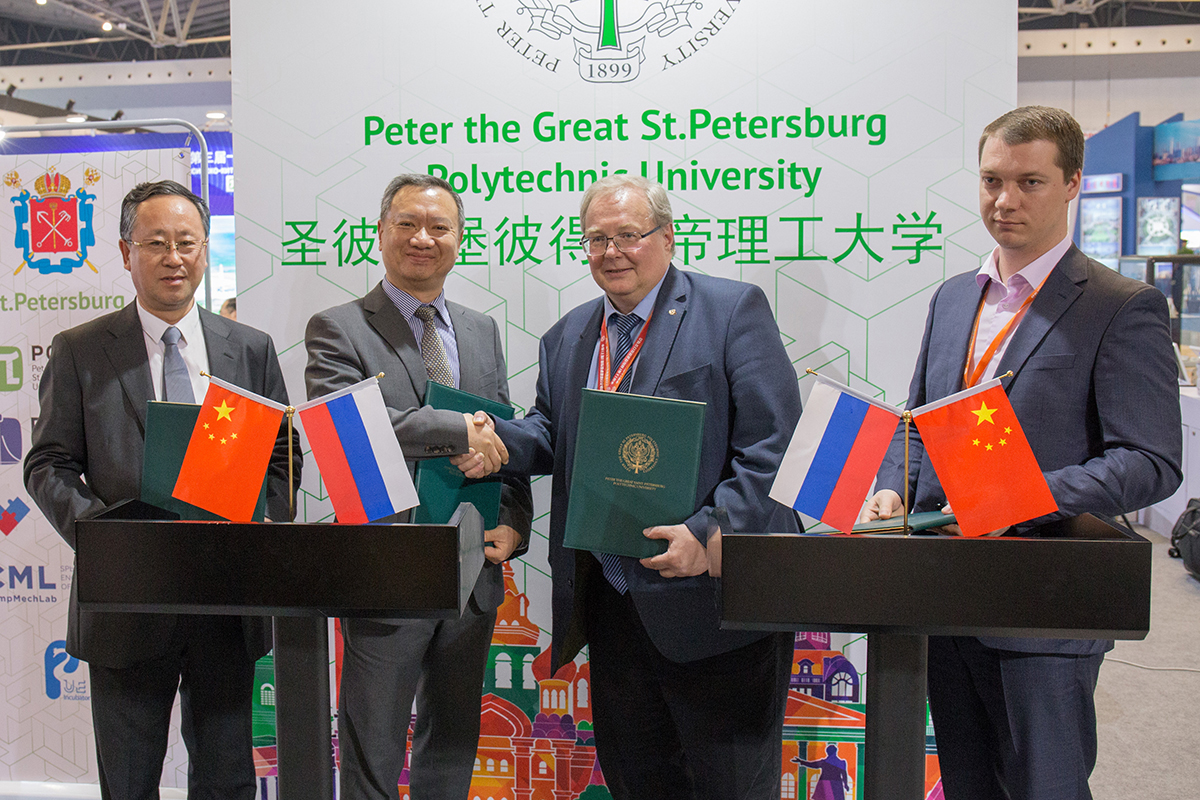 On the same day, a series of events took place at the Shanghai World EXPO Exhibition and Convention Center. The first of them was the round table on “Science-based engineering in the creation of the electric vehicle of the future: weight reduction, bionic design, and optimization.” Vice Rector on prospective projects A.I. BOROVKOV, O.I. KLYAVIN, members of the SPbPU delegation, representatives of Chinese companies and organizations participated in the event. Ms. Su ZZIN, Director of the SPbPU Representative Office in Shanghai, greeted participants and introduced the speakers. Vice Rector on prospective projects A.I. BOROVKOV presented a report on the “Smart digital clones: a new paradigm of digital design and modeling of globally competitive production of the new generation.” In the second part of the event, the Chief Constructor of the SPbPU Laboratory of Computational Mechanics O.I. KLYAVIN presented a report on the topic of “The working experience of the Engineering Center of SPbPU and the CompMechLab®) GC with the leaders of the world motor manufacturing industry: a customized electric car of the new generation, the CML CAR, as an example of advanced production technologies.” Both reports aroused major interest of the event participants. 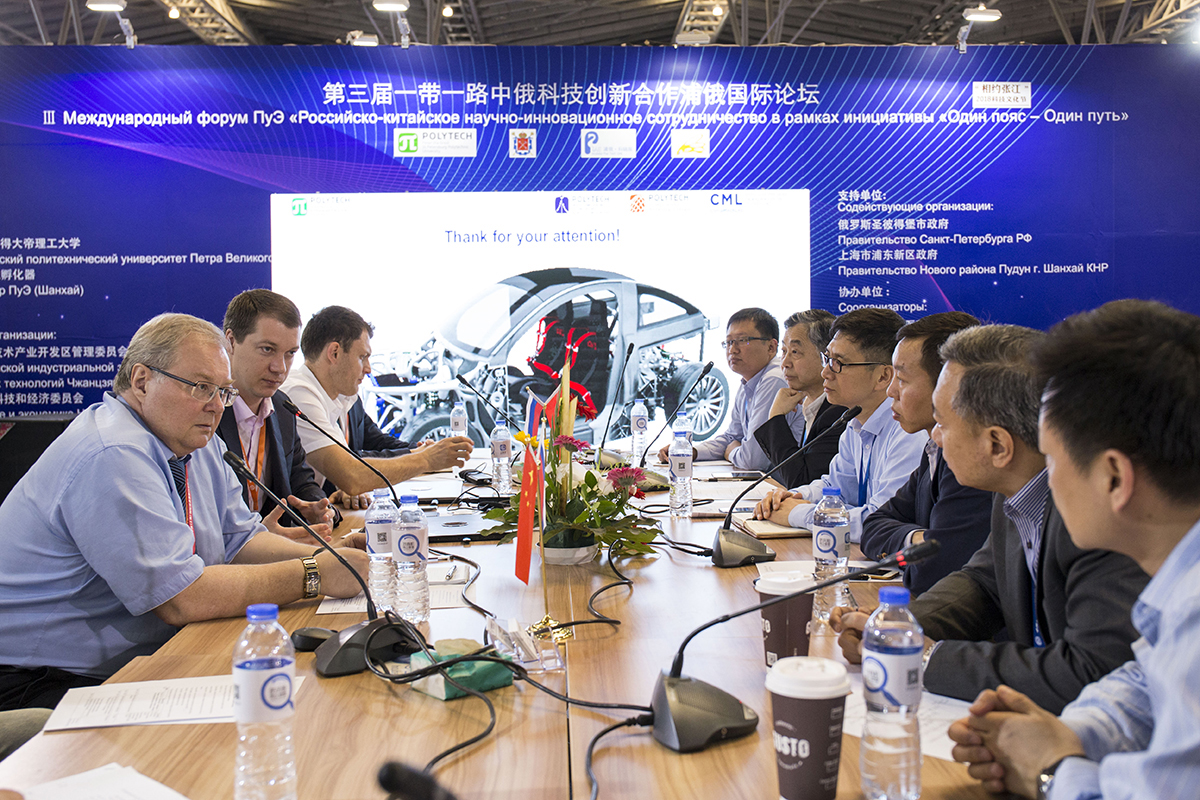 The next in series of round tables was the Forum on the “Russian-Chinese Strategic Cooperation in the Sphere of Technology Transfer and Industrialization in the Biomedical Sphere.” From the SPbPU part, A.A. LUKASHIN, Associate Professor from the Telematics Department of the Institute of Computer Sciences and Technologies (ICSST) took part in the event and presented a report on “Artificial intelligence and supercomputer modeling in life sciences and medicine.” 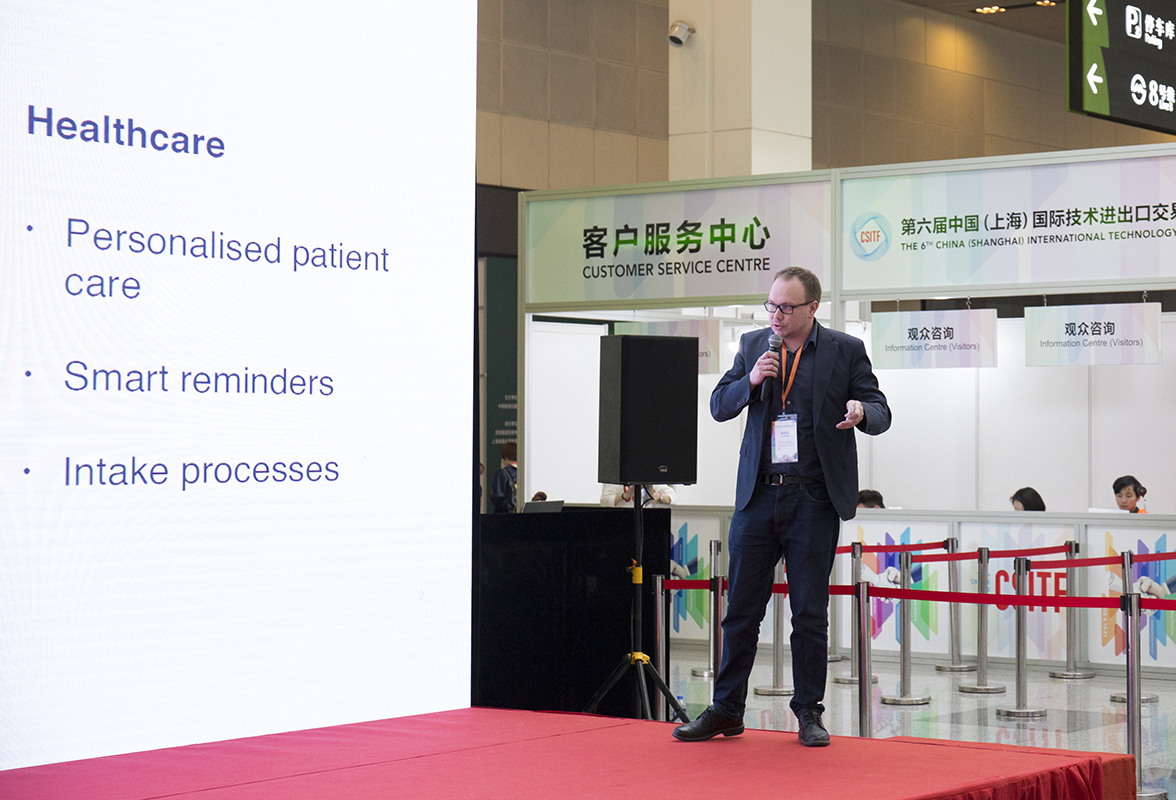 Right after that, a round table on “Strategic Cooperation between the NARI Group and SPbPU” with participation of SPbPU representatives (A.I. BOROVKOV, O.I. KLYAVIN, V.S. ZABOROVSKIY, and others) and CEOs of the major Chinese power production company NARI Group (Director General of the NARI Group Zheng Zongqiang, Director General of the NARI Group Power Net Luo Jianbo and others) took place. After a friendly exchange of greetings, the parties discussed the possibilities for the development of possible cooperation and, specifically, the matters of creation of a joint laboratory of the NARI Group on the basis of the SPbPU “Equipment for Power Networks” Department. A.I. BOROVKOV told about the SPbPU capabilities in the sphere of prospective spheres in digital electronics engineering development; he particularly touched the topic of creation of the electric cars, along with other newest technologies. Mr. Zheng Zongqiang presented proposals on the possible development of cooperation and, in his turn, presented the capacities and goals of the NARI Group in the innovation sphere. SPbPU professor M.V. AFANASIEV spoke about the possible cooperation spheres in the oil and gas industry: he presented a report on the activities of Gazprom Neft PJSC. ICST Director V.S. ZABOROVSKIY told the audience about the SPbPU production potential; particularly, he spoke about exploitation of the Polytechnichesky super computer which is the third large computer in the world. Associate Professor Yu. M. Asaturova, SPbPU, presented a report on the work of the Science and Education Center (SEC) of Gazprom-Polytech. Ms. Su ZZIN, Director of the SPbPU Representative Office in Shanghai also spoke about cooperation between SPbPU and the NARI Group. 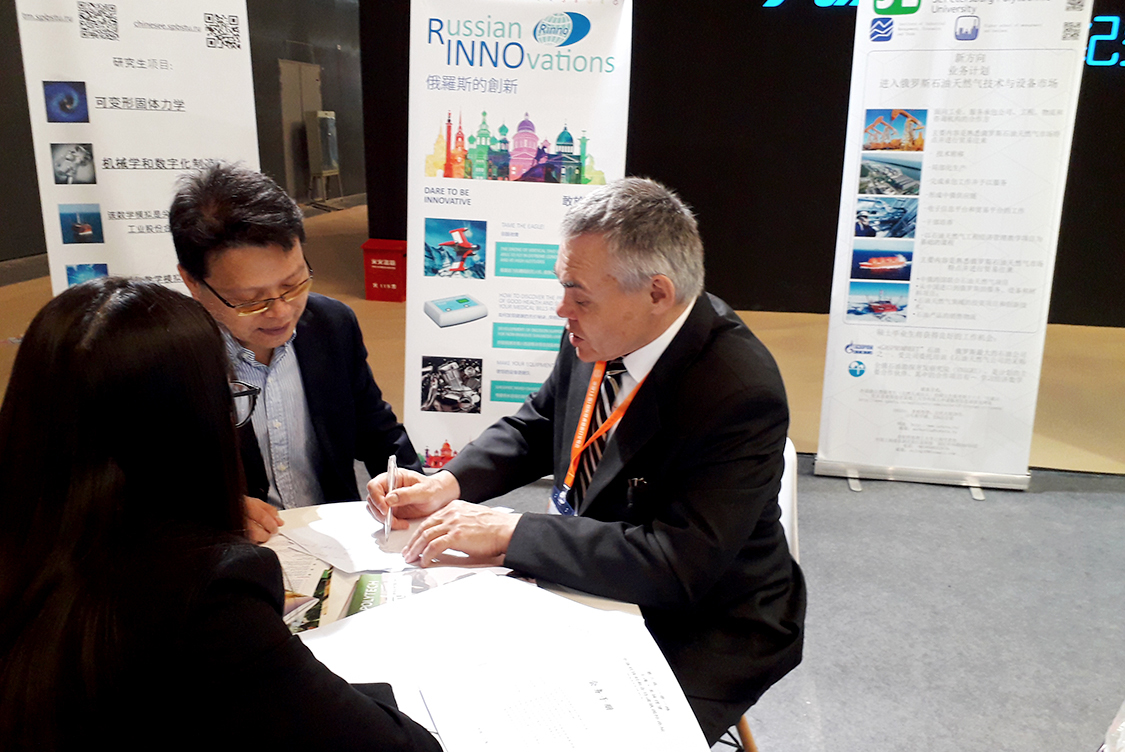 In the result of the negotiations, preliminary agreements on further cooperation were outlined; in particular, the working group of SPbPU and NARI Group representatives was approved; goals and functions of a joint laboratory, planning of mutual projects and other working matters were also set.

Another busy day the Shanghai Representative Office had on April 20: several round tables and business meetings took place here. A round table on “Information and Telecommunication Technologies in the Development of the RF Digital Economy and National Engineering Development” took place with participation of ICST Director V.S. ZABOROVSKIY, SPbPU delegation members, and representatives of Chinese companies and organizations. Within the frame of the event, Professor V.S. ZABOROVSKIY had held negotiations with the Sinotrans Company on the joint creation of the “Logistic Park” intellectual system. It was pointed out that creation of such a system needs a special application based on utilization of various strategies for storing and delivering shipments, including that on the basis of multimodal transportation corridors organized using automobile, railway, and aviation systems of shipment deliveries. The meeting resulted in the resolution on the necessity to develop an agreement on creation of a prototype system based on technical requirements. 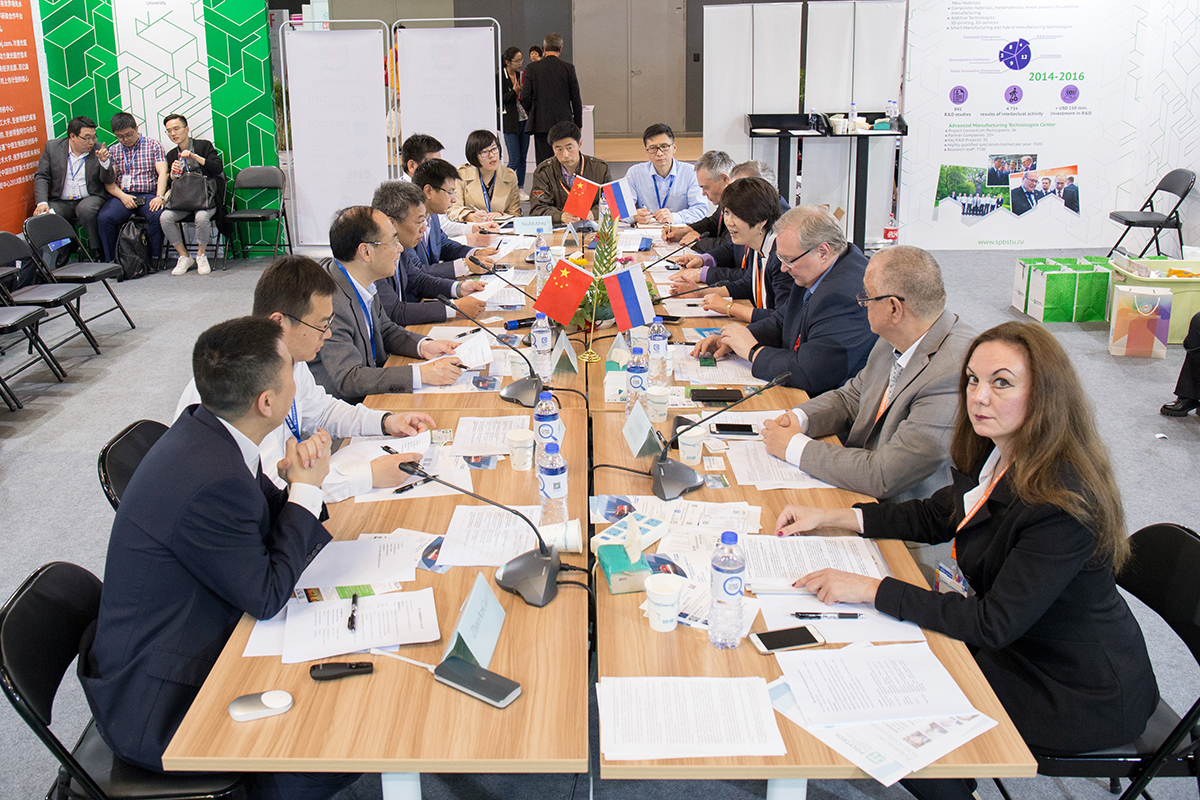 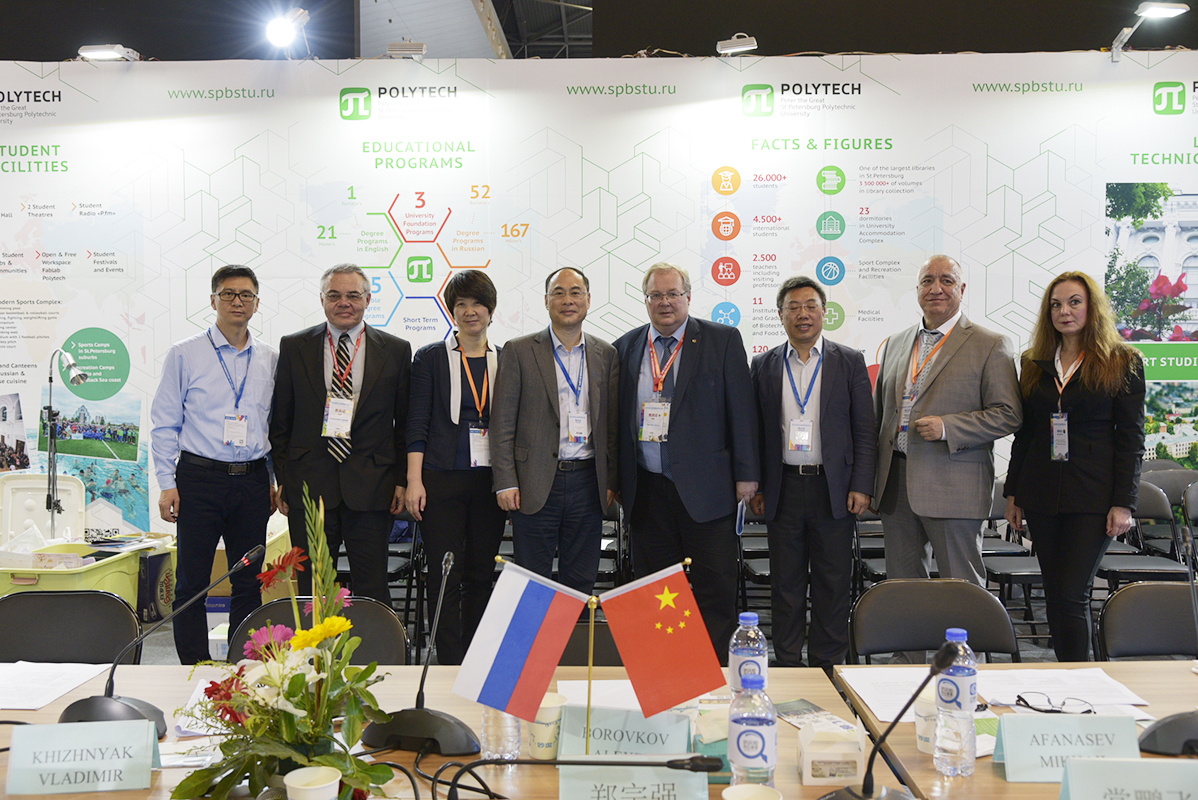 The program also included a round table on the “Chinese Technologies and Equipment for the Oil and Gas Complex of Russia: Promotion and Localization of Manufacturing Facilities,” within the frames of which a business meeting of SPbPU representatives and employees of oil field services and oil companies of China took place; in particular, these included the Chinese National Offshore Oil Corporation, the MSP / DRILEX Co., Ltd. (China), and other. SPbPU Professor M.V. AFANASIYEV and Associate Professor Yu. M. Asaturova told the audience about the leading research projects implemented at SEC: fracture modeling, mathematical model of micro-seismic events occurrence in the course of fracture propagation of hydraulic fracturing, etc. Professor S.B. MAKAROV made presentations on the “Thermoelectric energy storage: thermoelectric generator based on MEMS technology” and “The development of the data transmission nodes of the distributed engine control system,” which Russian and Chinese colleagues met with great interest. 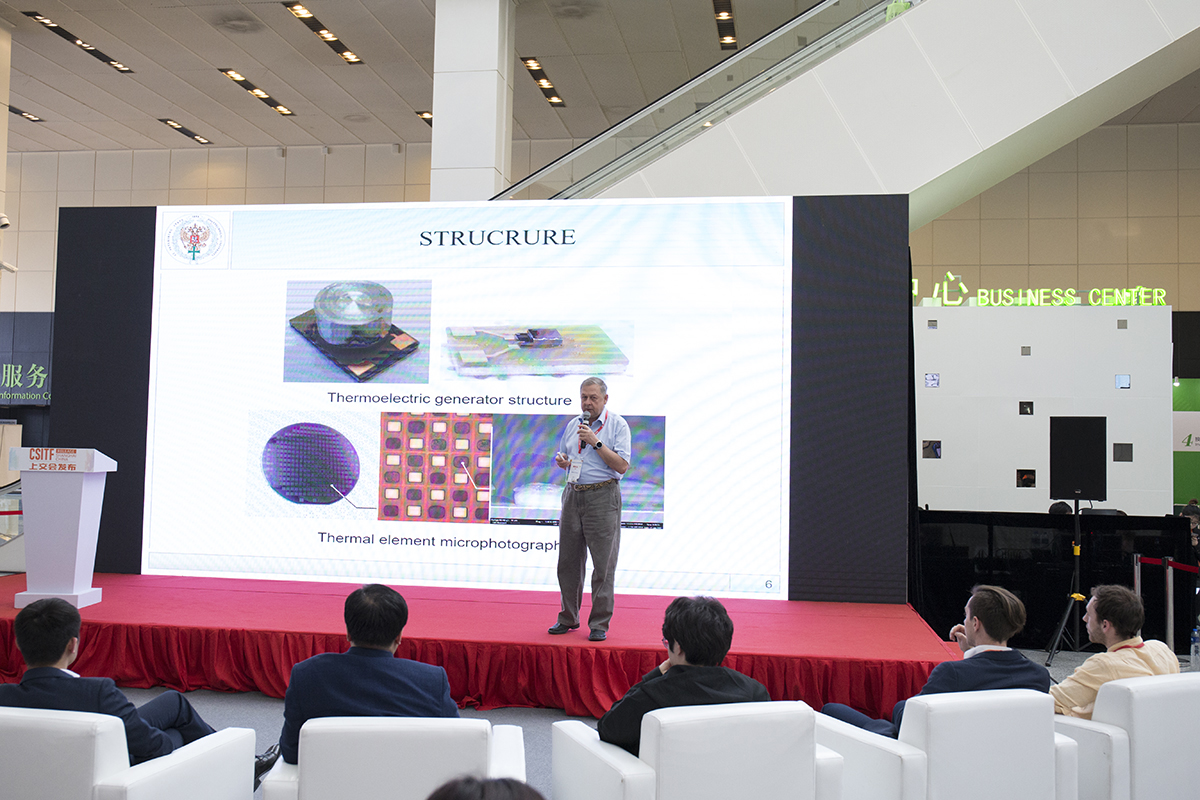 Besides this, within the frames of the round table, negotiations with Chinese companies, such as China Electronics Technology Group Corporation (CETC) and Sea Pioneers Technologies, took place. Based on the outcomes of the negotiations, a resolution on inviting SEC employees for teaching lectures at CETC, experience and technology exchanges, etc., has been adopted. Agreements with the Sea Pioneers Technologies were reached on cooperation in the field of promoting Chinese technologies to the Russian market; the parties have also agreed on holding a working meeting in Shanghai.

In parallel with a series of round tables, the Asia-Pacific Summit on Artificial Intelligence was held on April 20. On behalf of SPbPU, ICST Director V.S. ZABOROVSKIY presented a paper on the “Telematics platform for intelligent transport systems” telling about organization of multi-modal transportation systems and traffic control of unmanned transport platforms based on telematic cards, a new class of information service for the cloud applications control, etc. A research development of Polytechnic University oriented on the use of an on- board multiprotocol processor that processes data received via different communication channels, including Wi-Fi, LTE, Glonass/GPS, BT was presented as a prototype. In the course of discussions on this subject it was noted that the creation of intelligent transport systems is a priority scientific and engineering task; its solution requires the use of machine learning systems, supercomputer modeling capabilities and high-performance telematic services.

Also, within the framework of the Asia-Pacific Summit, Director of the IFNiT S.B. MAKAROV held meetings with representatives of the Center for Fundamental Physics of the Chinese Academy of Sciences; they discussed the creation of a joint research laboratory on the basis of SPbPU focused on the researches of nanomaterials for the electronic industry.

A special event was a meeting of Vice Rector on prospective projects A.I. BOROVKOV and Chief Constructor of the SPbPU Laboratory of Computational Mechanics O.I. KLYAVIN with the leaders of the Commercial Aircraft Corporation of China (COMAC), in the course of which the parties discussed the prospects of the possible cooperation and use of CompMechLab’s competencies. 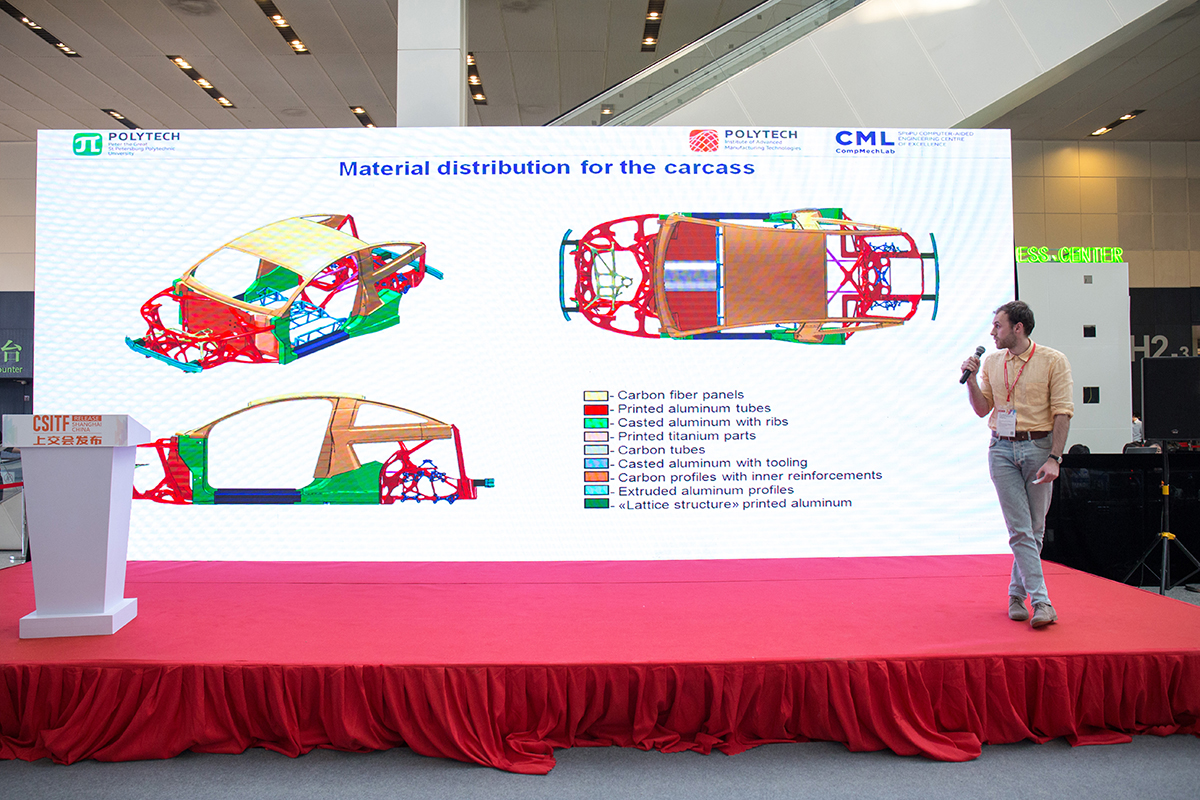 “In the course of several decades, SPbPU has been maintaining close and trust-based relations with Chinese universities, companies, and organizations. We are striving to continue our bilateral dialogue of friendship and cooperation, and we hope that the events which had taken place within the frame of the 6th Chinese International Technology Fair will contribute to its strengthening and potency,” SPbPU Vice Rector on International Activities D.G. ARSENYEV commented on the events of the Fair.

The intensive business program of CSITF was continued by a series of events at the SPbPU Representative Office in Shanghai: a meeting between the representatives of Polytechnic University and members of the government of Karamai, the famous oil-producing center in Shanghai, took place on April 21, 2018, followed by a reunion of SPbPU alumni at the Representative Office of SPbPU. We will tell about the negotiations and the alumni reunion in our following news issues at the official SPbPU website: follow our upgrades!