On May 17 Peter the Great St. Petersburg Polytechnic University was visited by a delegation from Shanghai Jiao Tong University (China) in order to establish partnership relations and develop joint research and educational projects. 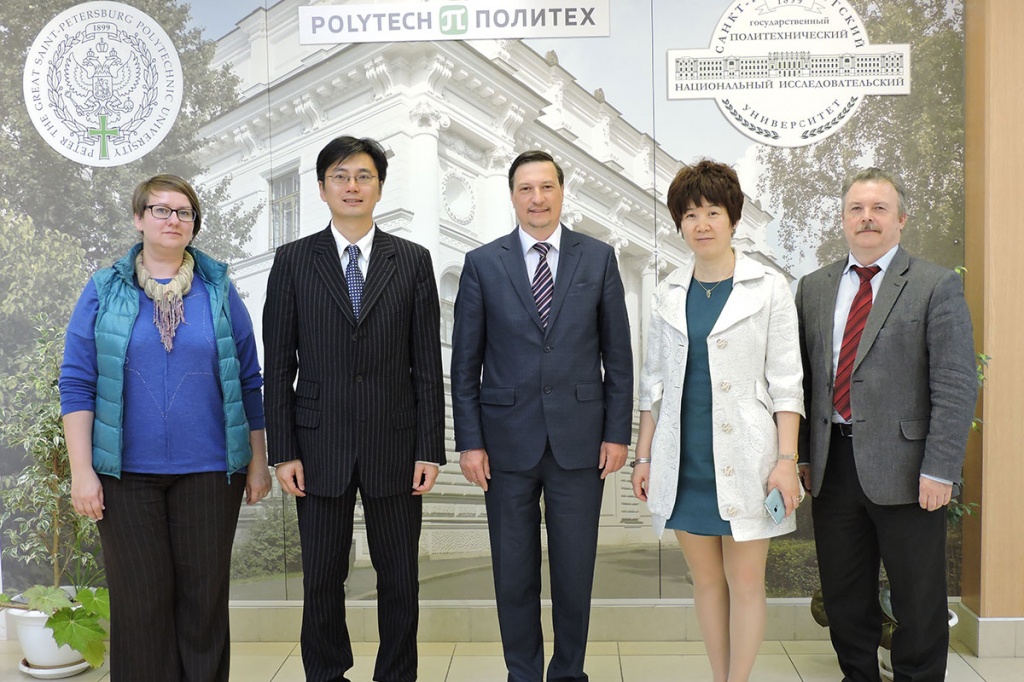 At the meeting in SPbPU, Shanghai Jiao Tong University was represented by Deputy Director of the Institute of Science and Technology Development, Luo Weidong and an employee of the university.

The head of the International Cooperation Office, SPbPU, V.D. Khizhnyak told the foreign guests about achievements of the Polytechnic University, priority trends of interaction with universities in different countries of the world and active policy aimed at formation of joint educational space with China.

The Director of SPbPU representative office in Shanghai, which grand opening ceremony took place this April, Ms. Su Jing confirmed that the Polytechnic University set a steady course for the East, continuing at the same time to develop its strategic relationships with the European partners, which support the progressive views of the Russian and Chinese colleagues. 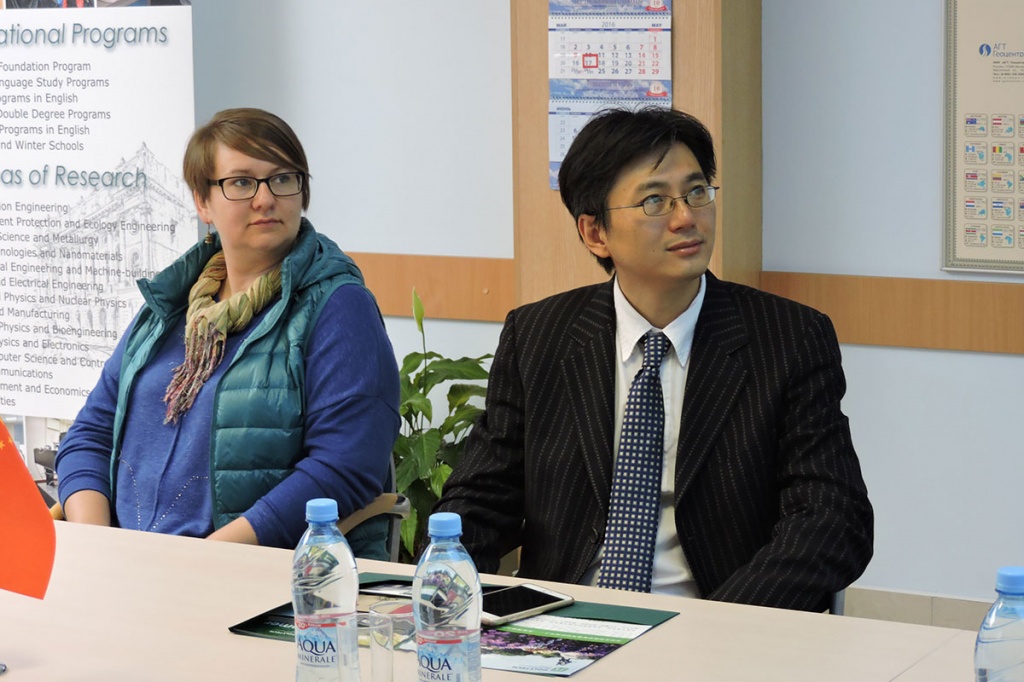 “Cooperation of the Polytechnic University and Jiao Tong University is an interesting stage of development for both universities. Such an alliance is a firm basis for strategic projects, aimed at improvement of the quality of education and search for innovative ideas, which guarantee successful functioning of global economy. In the meeting we also discussed setting up a Russian club based in Jiao Tong University, whose main objective will be to popularize the Russian language and culture in China,” said Ms Su Jing.

The representatives of Shanghai Jiao Tong University were really interested to hear the proposal of the administration and scientists of SPbPU. In their turn, they spoke about research projects of Shanghai Jiao Tong University. The university is involved in close cooperation with more than a hundred universities of Hong Kong, Macao, Taiwan, with many transnational enterprises, World Health Organization, The United Nations Population Fund, etc. 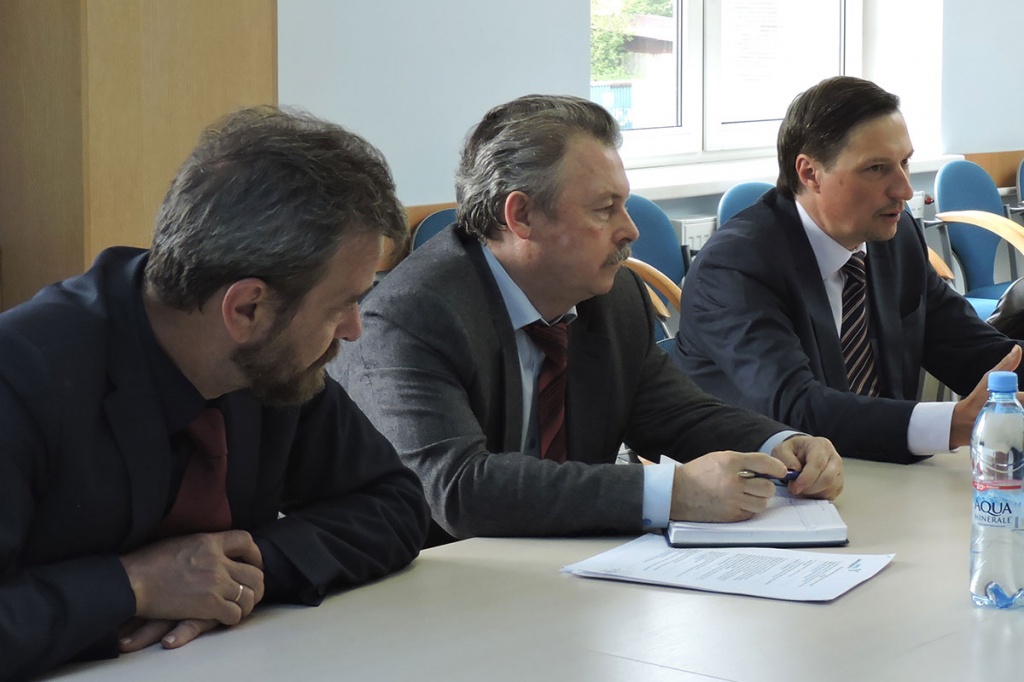 The Chinese delegation also visited the Institute of Physics, Nanotechnologies and Telecommunications and the Institute of Applied Mathematics and Mechanics. The Chinese scientists were impressed with the achievements and successes of SPbPU teaching staff, professional attitude to work and drive to cooperation with Jiao Tong University. As early as today it is obvious that the interests of both universities in engineering, life science and some other areas coincide.

At the end of the visit, its outcome was summed up in negotiations with the Vice-Rector for International Cooperation D.G. ARSENIEV.

“China is a very important country for us. The Polytechnic University has a lot of contacts with universities and companies of the People’s Republic of China. Recently, SPbPU representative office has been opened in Shanghai. If we look back at the history of interaction, we’ll see that we have been actively collaborating with China’s universities since 1950,” says D.G. ARSENIEV. “I’d like to emphasize that we’re interested in partnership relations with Shanghai Jiao Tong University, implementation of educational and research projects, and academic mobility programs.”

An important topic for round table discussion was the issue of organizing an intelligent dialogue between representatives of companies and scientific community, interested in transfer of technologies and innovative ideas, which must find their practical application. “Engineering landing force should provide a noticeable benefit,” believes D.G. ARSENIEV.

In conclusion of the meeting the Vice-Rector for International Cooperation of SPbPU expressed his confidence in successful collaboration. “We hope that your university will become our basic strategic partner in Shanghai. We rely on participation of our universities in serious projects, funded by the Chinese and Russian parties. You understanding of economic and industrial development of Shanghai will help us to see what direction to move on to,” D.G. ARSENIEV summed up the meeting.

Shanghai Jiao Tong University, China is one of the oldest and most influential universities in China. The higher educational institution was founded in 1896 with the cooperation of the Ministry of Education and Government of the city of Shanghai. Shanghai Jiao Tong University comes fourth in the rankings of all educational institutions of China and 153rd among all universities in the world.