At the end of October, Rajiv Dusane, Dean for International Relations at the Indian Institute of Technology Bombay (IIT Bombay), paid a visit to the Polytechnic University. The visit took place following up upon the roundtable discussion held on May 8, 2015 at Lomonosov Moscow State University as part of the Indian President Pranab Mukherjee's official visit to the Russian Federation. D. V. Livanov, Minister of Education and Science of the Russian Federation, as well as delegates from the Ministry of Human Resource Development (India) and the Ministry of Education and Science of the Russian Federation, took part in the discussion. In the course of the round table, A. I. Rudskoy, Rector of SPbPU, and rectors of the leading Russian and Indian universities signed the Declaration on the establishment of the Russian-Indian Association of Higher Education Institutions. As of today, agreements on cooperation have been reached with the leading Indian technological universities – the Institute of Technology Bombay and the Indian Institute of Technology Madras. 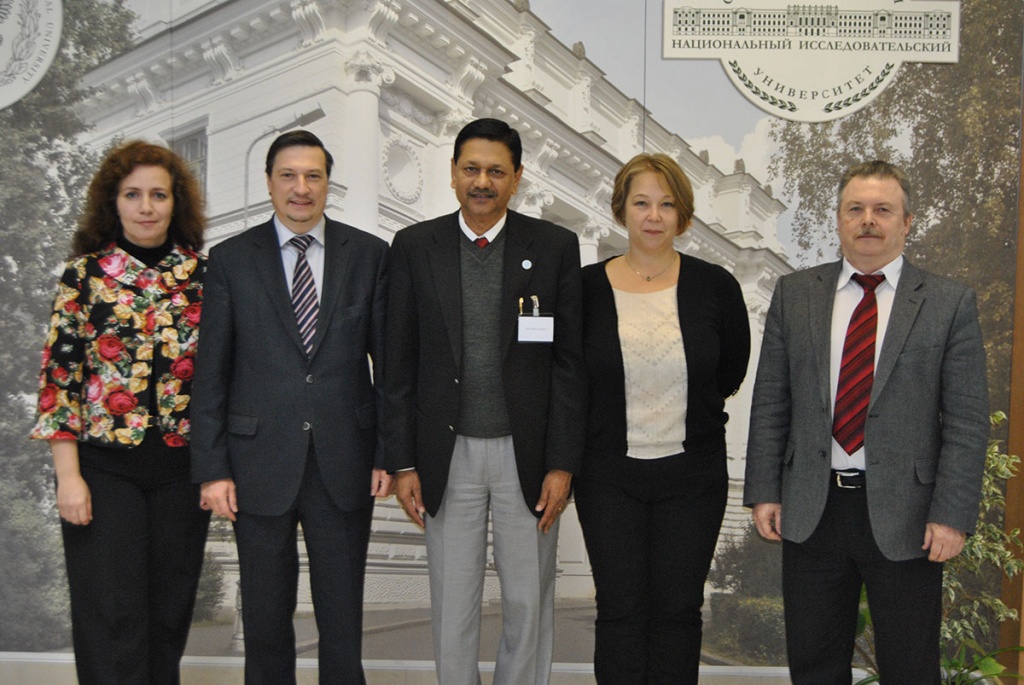 Rajiv Dusane's visit took place as part of the agreement on cooperation signed between SPbPU and the Indian Institute of Technology Bombay by invitation of D. G. Arseniev, Vice-Rector for International Relations, made during the meeting at the BRICS Global University Summit in Moscow.

The relations between Russia and India in the field of education are currently one of the main directions of the "privileged strategic partnership" based on trust and competence of the two governments. During the official meeting with the Indian cabinet in New Deli in December 2014, V. V. Putin, President of the Russian Federation, emphasized the importance of pursuing a system policy aimed at the enhancement of Indian and Russian competitive advantages, development of mutually beneficial cooperation, and coordination of effort on the international stage in order to tackle global problems. It should be noted that planning the joint efforts in the field of science and education is a priority for both countries. Major Indian companies take pride in the fact that many of their employees got education in Russia. It is particularly important in the modern context as Russia's role in the world is increasing.

The Indian Institute of Technology Bombay also takes interest in cooperation with Russian universities. Not only is this a higher education institution, but also a recognized Indian research center that implements a lot of projects which are important for the country's industry. A lot of renowned engineers, CEOs, and leading scientists of federal and global importance graduated from the Indian Institute of Technology Bombay. Following the Indian state policy, the Institute stated its willingness to establish a contact with the Polytechnic University.

"Our country cooperates with Russia on various projects. Traditionally, it is cooperation in the military industrial sector and nuclear power industry. However, today we can see the evolution of relations in the field of science, education, and culture. I am sure the dialogue between our universities will be successful, and I would like to invite members of the Polytechnic University to visit the Indian Institute of Technology Bombay," Rajiv Dusane stated.

D. G. Arseniev, Vice-Rector for International Relations, endorsed the initiative of his Indian counterpart and proposed to arrange a meeting between Russian and Indian scientists. "The Institute of Physics, Nanotechnology and Telecommunications conducts unique research that our Indian colleagues may find interesting. Same as the Indian Institute of Technology Bombay, our university focuses on research and development that is practical, rather than abstract. We primarily work on government orders in the field of economics and industry. All our researchers work to see Russia develop. Following the national cause helps us carry out the wildest experiments that later become scientific achievements for the whole world," Dmitry Germanovich asserted.

In the course of the meeting, issues of academic mobility programs were discussed. Students of the Indian Institute are willing to attend SPbPU summer schools and study for Bachelor's or Master's degrees that are available in English.

The Indian delegate was pleased with his visit to SPbPU and is looking forward to another meeting with SPbPU delegates any time soon.

The Indian Institute of Technology Bombay (IIT Bombay) is an autonomous university located in Powai in the north-east of Mumbai (former Bombay). IIT Bombay is the second oldest university campus in the Indian system of technological institutes, and the largest National Institute in the Maharashtra state. IIT Bombay ranks among the top three best Asian universities in science and technology. In the QS World University Rankings, IITB ranks 202nd. The Indian Institute offers a comprehensive program of engineering education. IIT Bombay has 14 departments, 6 science centers, and 3 interdisciplinary programs. More than 39,000 engineers and scientists currently involved in the development of the Indian industry are IIT Bombay graduates.