The 2nd Russian-Spanish Language and Culture Week is starting soon: the first events will takek place on November 16. Registration for most of them is still open, and on the eve of the Week we will tell you what exactly SPbPU and the University of Cadiz (Spain) are preparing this year.

Let us remind that the 2nd Russian-Spanish Language and Culture Week will take place entirely online. Its key audience is composed of students, teachers, employees of international offices of universities and all those who love to study foreign languages and want to get to know the culture and traditions of Russia and Spain. The program of the Week includes lectures and seminars, master classes and round tables, classes in Russian and Spanish, poetry soirees, exhibitions, an online quiz, and a flamenco concert. 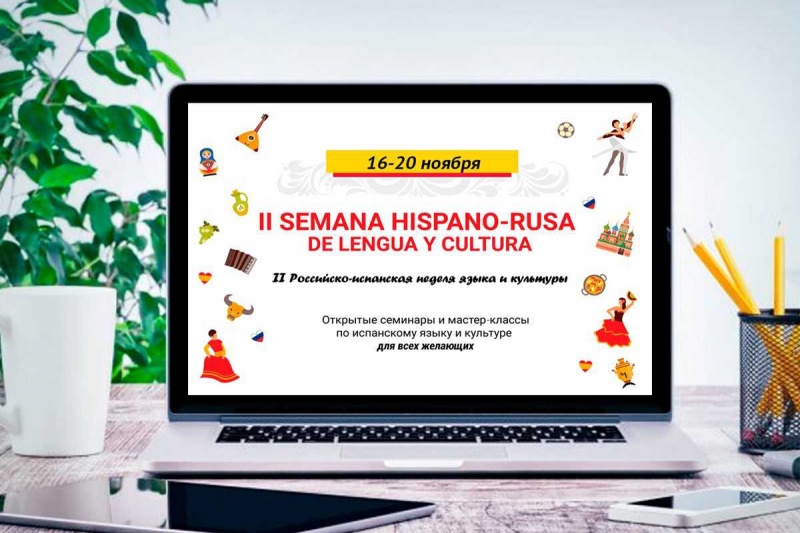 Teacher of the National Research University Higher School of Economics (Russia) Olga VOLOSYUK will teach lectures on “Spain and Russia on the two shores of Europe: relations for centuries” and “The discovery of Spain by Russia: history and culture” on November 16 and 17: during those the participants will learn about the relations between states, and cultural and historical characteristics of the two countries. On November 20, a lecture by SPbPU professor Dmitry Kuznetsov “Petersburg Betancourt” will be delivered; it will speak about the personality of the great architect who made a fundamental contribution to Russian architecture and engineering of the 19th century.

A series of master classes will begin with a virtual tour of the cities of Russia, which will start on November 16. The lesson will be held in Russian and Spanish, so that everyone can get acquainted with the most interesting cities in Russia, fascinating tourist routes and make a trip from St. Petersburg to the shores of Lake Baikal. On November 16 and 17, master-classes in Russian as a foreign language, namely, “Preparation for testing TORFL (B2)” will take place. The practical course consists of two lessons and is intended for everyone who wants to check the level of their preparation for testing in Russian as a foreign language at the B2 level. For those who are interested in Russian culture, traditions and dishes of Russian cuisine, on November 18 there will be a master class “Russian folk crafts. Russian cuisine.” And for lovers of Russian literature, on November 19, a master class “Literary living room: modern Russian literature” will take place, which will acquaint the participants with the main directions of the development of Russian literature from the end of the 20th century to our time. For those who study Spanish in Russia, on November 20, a master class on “Cultural stereotypes and customs” will be held. The event is suitable for A1 level students, and will help them learn about a variety of Spanish customs and cultural features.

On November 17, partners from the University of Cadiz, the coordinator of Spanish as a foreign language courses and teaching methodology Maria del Carmen Fernandez MOLERO and the teacher of the Higher Center of Modern Languages ​​(CSLM) at the University of Cadiz Macarena GOMES will hold a seminar for teachers of Spanish as a foreign language “Teaching Spanish during a pandemic.” And at the seminar “Experience of scientific and technical cooperation between Russia and Spain,” which will be held on November 18, representatives of the Spanish company Talgo will speak about their high-speed railway projects in Russia. In addition, teachers from Madrid Polytechnic University and Peter the Great St. Petersburg Polytechnic University will speak about the most important joint projects and the results of cooperation between the two universities in the field of engineering.

Within the framework of the 2nd Russian-Spanish week, two round tables will be held. The first one on the “Topical problems of teaching Russian as a foreign language” will take place on November 18. The event is moderated by Professors Irina Baranova (SPbPU) and Andres Santana ARRIBAS (University of Cadiz), as well as President of the Spanish Association of Professionals of Russian Language and Culture (AEPRU) Enrique Quero HERVILLA. On November 19, a round table on “Spanish as a strategic instrument of internationalization” will take place. Francisco Javier de Cos RUIS, Director General for Linguistic Policy of the University of Cadiz, and Lilia MOISEENKO, President of the Association of Hispanists of Russia and lecturer at Moscow State Linguistic University will moderate it. Presentations of Russian and Spanish specialists on this topic are planned.

“The second Russian-Spanish Week of Language and Culture aroused quite an interest in the audiences of both countries. We can see this by the number of registered for the events: there are almost 400 of them already. We even have to put some participants on the waiting list: unfortunately, the format of online classes in Russian and Spanish is designed for a specific number of listeners, so that teachers can work with each student. But at most other events of the Week, the number of participants is not limited, and therefore, everyone still has time to register,” said one of the organizers of the Week, coordinator for cooperation with Ibero-American countries Svetlana KALIKINA.