Today, on June 24, Peter the Great St. Petersburg Polytechnic University held a Meeting of the Presidential Council for Economic Modernization and Innovations of Russia. The meeting was conducted by the RF Prime-Minister, D.A. MEDVEDEV. The participants of the meeting discussed the use of the potential of the universities and network forms of cooperation of the universities in development of the National Technology Initiative (NTI). 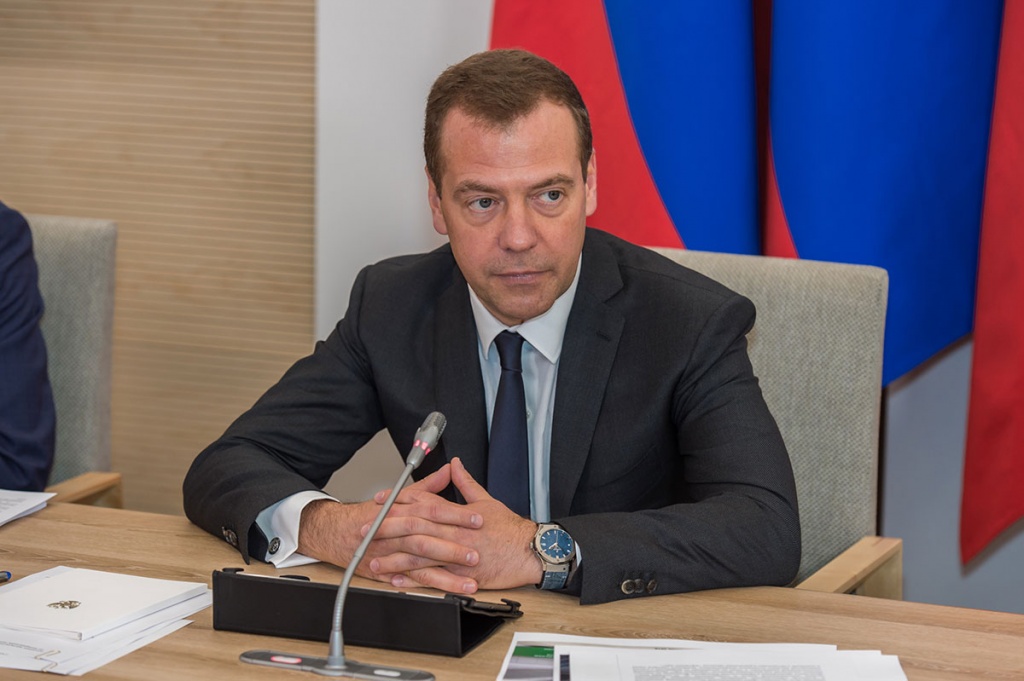 Before the meeting, D.A. Medvedev visited the Laboratory of Lightweight Materials and Structures and got to know about the engineering projects of the university. He also saw an exhibition of the students’ projects. The Prime-Minister was shown, in particular, a titanium hip joint implant, grown on a 3D printer, the facility “Friction welding with mixing” and the facility “Direct laser growth”; a microturbo-expandor generator “MDG-20”; an ultrasonic Doppler analyzer for early detection of decompression sickness, etc. 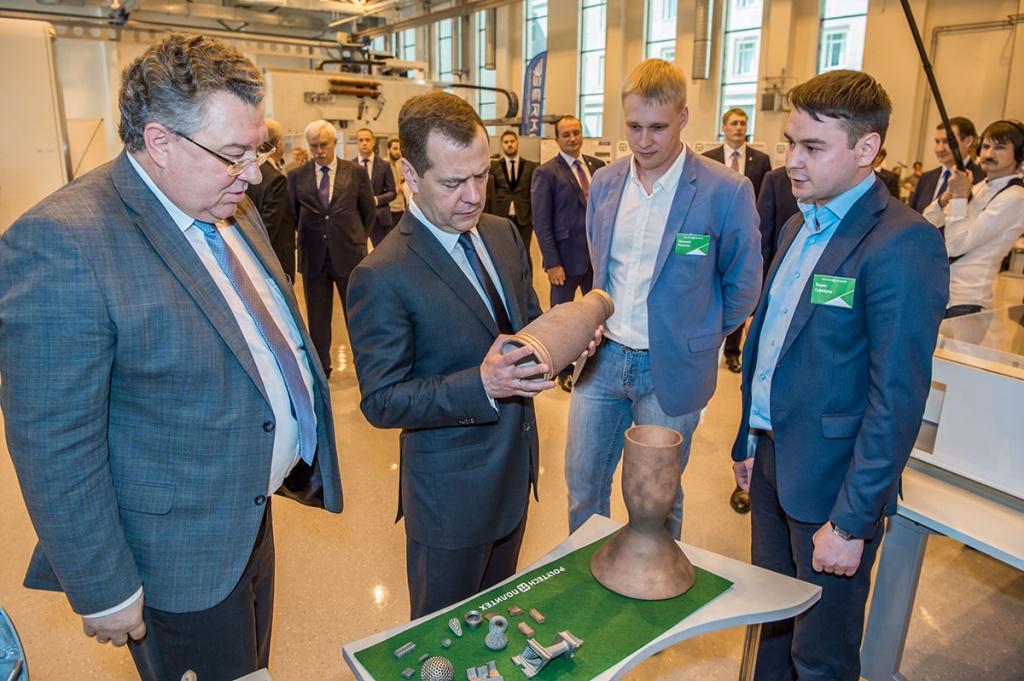 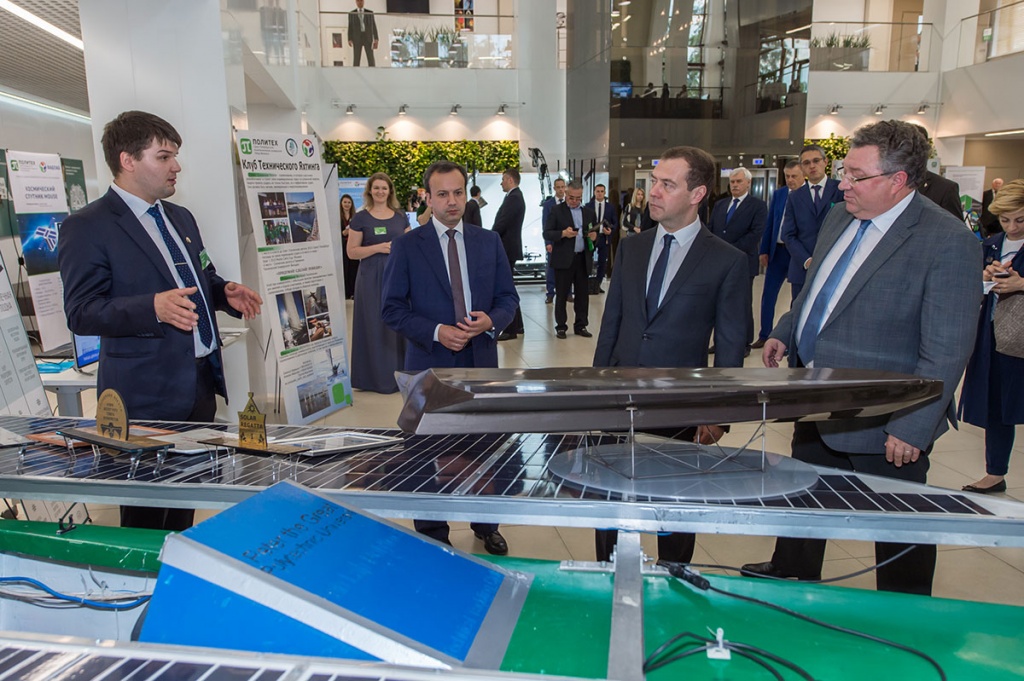 Opening the meeting of the Presidential Council for Economic Modernization and Innovations of Russia, D.A. Medvedev pointed out that it is no coincidence why it was being held in St. Petersburg Polytechnic University: “I have just seen how the Polytechnic University is using its scientific potential, including in the field of the National Technology Initiative, our program for development of advanced high-tech markets.” Speaking about the agenda of the meeting, the Prime-Minister commented that the participants of the Council had already defined the major approaches to development of the National Technology Initiative. The key tools of the NTI are “road maps”, four of which – “AeroNet”, “AutoNet”, “MariNet”, “NeuroNet” – are already operative. “We have just seen quite a few projects that are being developed in this university in terms of these maps – either individual ones or even combined ones,” said the Prime-Minister. The participants of the Council had agreed about the rules to develop program plans, select projects, monitor projects and about the forms of state support. According to D.A. Medvedev, this year the amount of subsidy for NTI projects is 8 billion rubles. 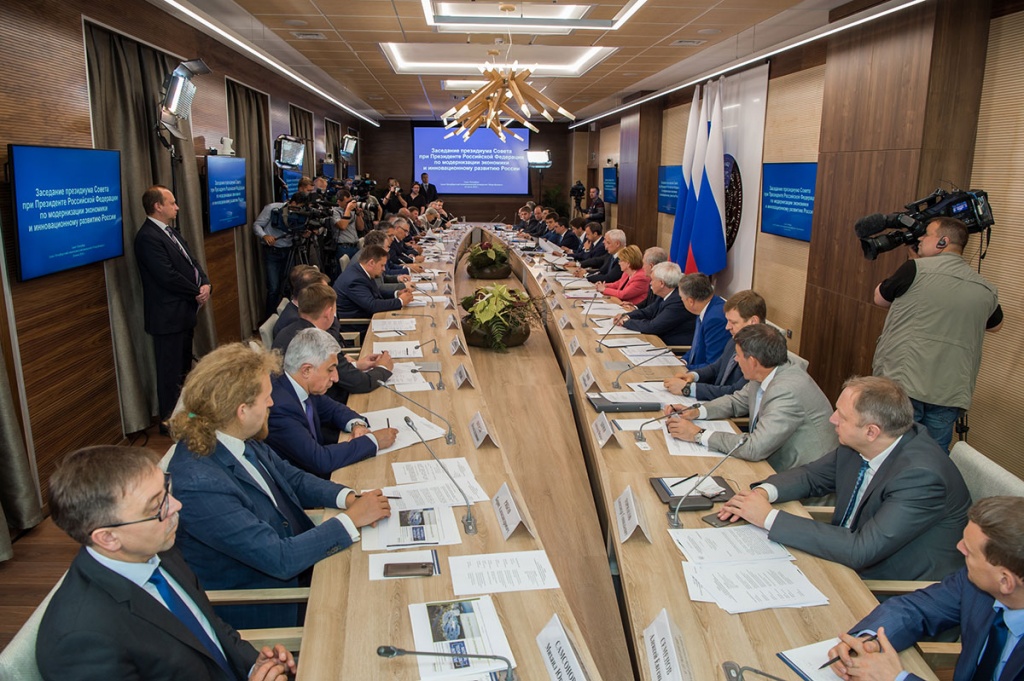 D.A. Medvedev stated an important role of the universities in developing the National Technology Initiative: “When we started the initiative, we assumed that to make it efficient we need to unite the efforts of all the participants of the innovative process, i.e. universities, science and production industry. <…> We have the most important things, of course: we have human resources, specialists, we have infrastructure, which is also changing, may be not so fast as everyone would want it to, but still it comes into concordance with the world trends and needs. But a big part of what is being done has a multidisciplinary character, so their connections, continuous update of contacts between universities, production industry are absolutely necessary.” 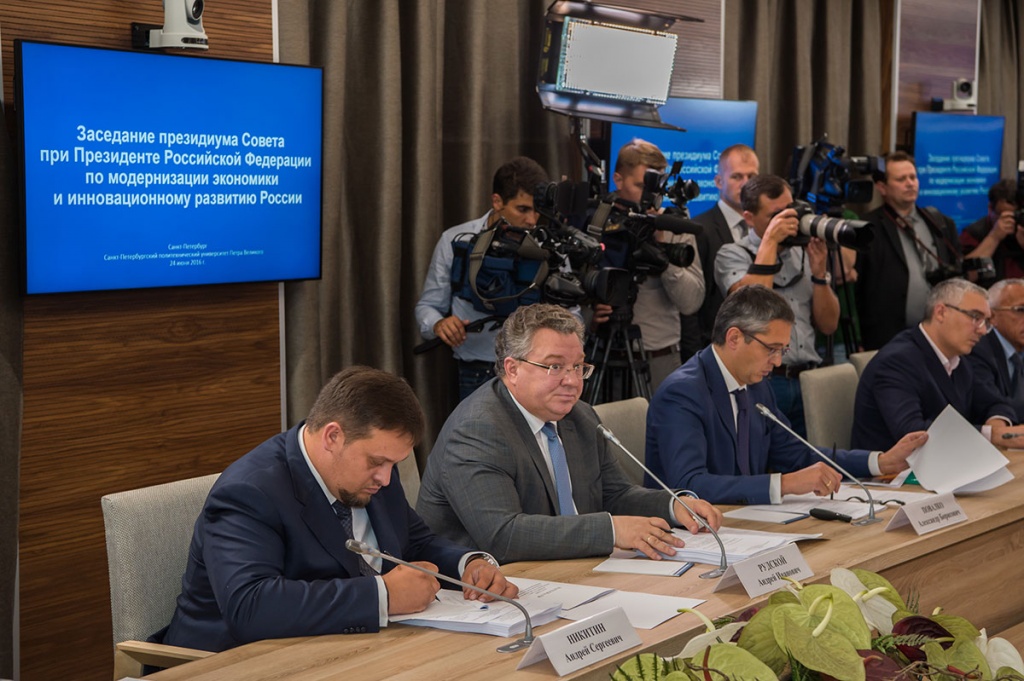 The Prime-Minister pointed out that development of the research competences of the universities has already been done for several years. University cooperation projects are carried out to create high-tech production facilities to attract foreign scientist, fully use the potential of the scientific community and form advanced infrastructure. In D.A. Medvedev’s opinion this has helped to prepare universities to what they have to do in terms of the National Technology Initiative: “There are universities, which are deeply incorporated in the innovative environment, have quite good results and now they should be involved in development of products and technologies which are in demand. This must be full-scale activity, which will finally result in serial production, and the university or enterprise set up on the basis of the university, in cooperation with allied suppliers and other industrial enterprises, begins to make money. We can see this in the most successful universities and this is quite a sufficient income.” 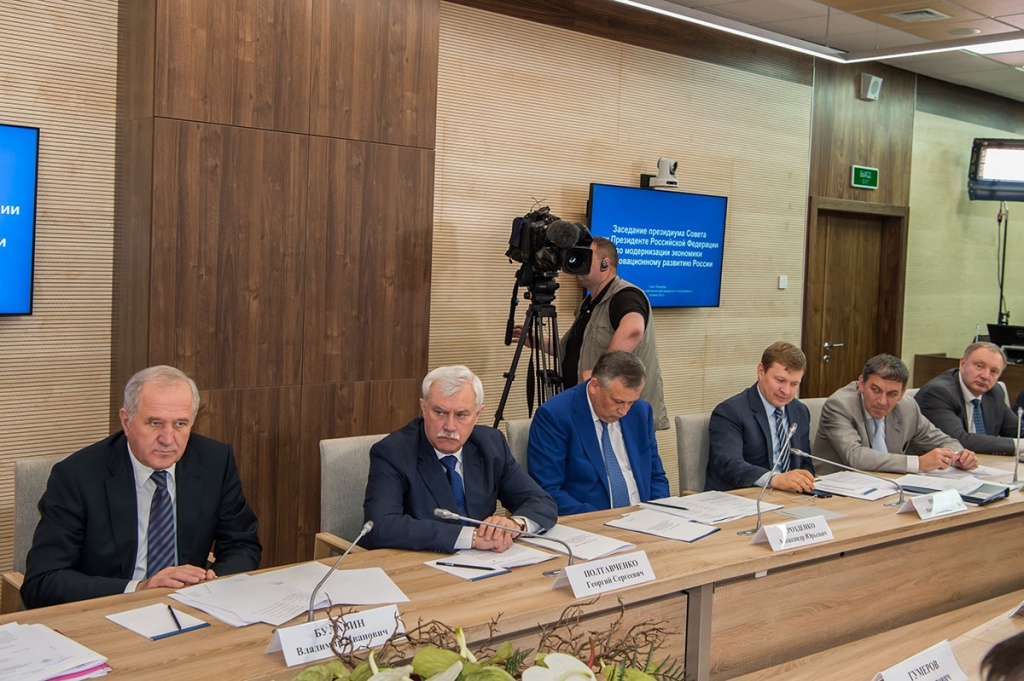 Now, according to the Prime-Minister, it must be determined what contribution the universities should make, if development of educational programs, R&D, training of personnel, organizational support, and analytical support will be enough and what additional decisions, in these terms, will have to be taken. Herewith, the Prime-Minister of the RF pointed out, the universities must be actively involved in developing basic technologies for the “road maps” of the NTI. “The list of such technologies was initially formed given the capabilities of the university sector of science, and, of course, those of the academic one. It will make it possible to integrate the universities, the major projects of the National Technology Initiative while the university teams, in their turn, will be able to participate in development of technical solutions at the world level. We have universities that are actively involved in it. Apart from St. Petersburg Polytechnic University, in which we are now, there are quite a few Moscow universities, Scoltech, and some others,” explained D.A. Medvedev.

In conclusion, the Prime-Minister of the RF pointed out that one of the major criterion for the competitive selection that the universities have to go through in order to participate in the National Technology Initiative must be participation of students in solving technology problems, while the “road maps” of the NTI must “go deeply into the educational process.” 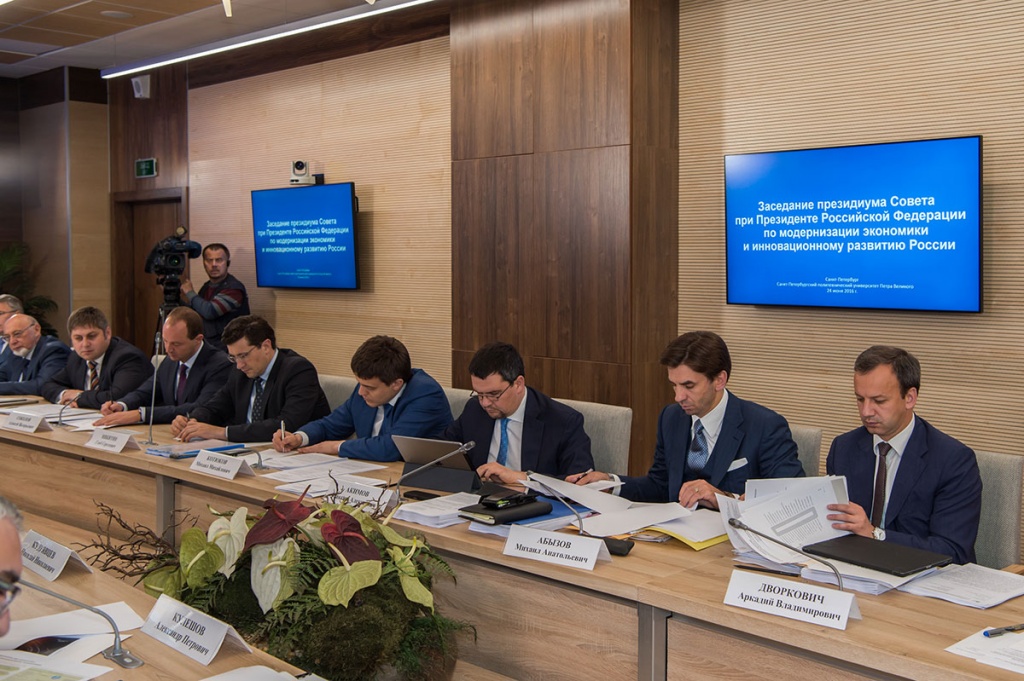 Further on the participants of the meeting made their presentations: 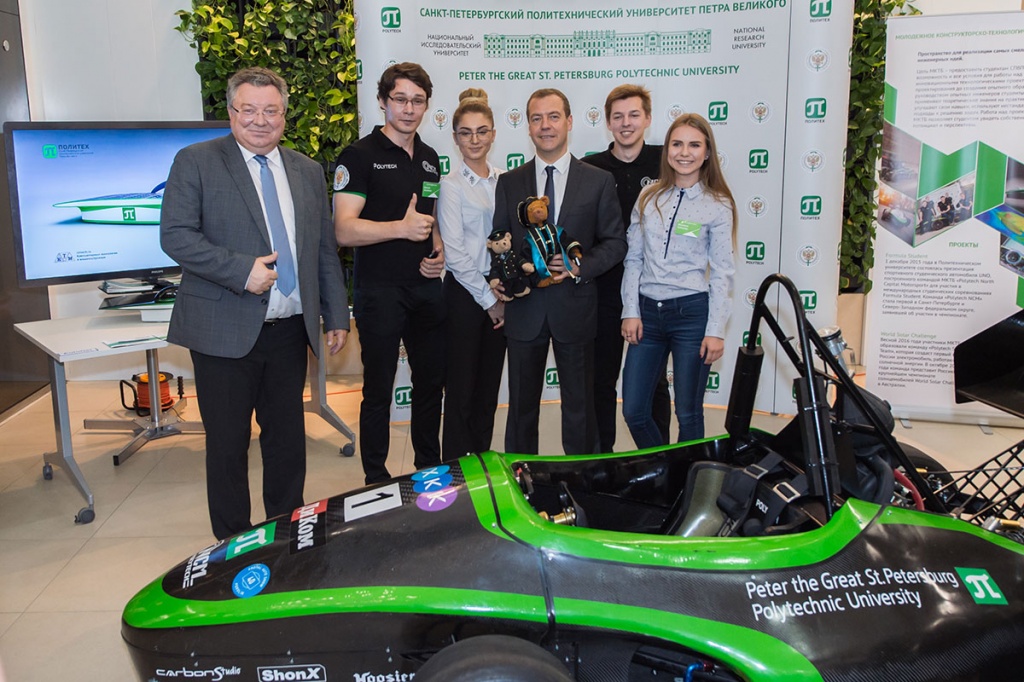 The results of the meeting of the Presidential Council for Economic Modernization and Innovations of Russia were commented by SPbPU rector A.I. RUDSKOY: “No doubt, the priorities for the politics in science, technology and innovation must be selected with a thoughtful and reasonable strategic approach. Above all, it refers to those areas which may form a scientific and technological revolution, new technological paradigm. As the participant of the Council could see today, the Polytechnic University is going through large-scale modernization of the research facilities, which allows us not only to teach the most advanced scientific disciplines, but also do research at the international level and of the international significance. We have young and gifted human resources and that is something the Prime-Minister has paid special attention to today. We try to create the environment for their communication so that their scientific ideas could be converted in specific technologies and high-tech products. Moreover, we will, of course, do our best to make sure that the achievements of our fundamental science will have connections with our domestic industry.”

The National Technology Initiative is undertaken by the RF Government in accordance with the RF President’s list of instructions dated December 5, 2014 and is seen as a long-term inter-agency program of public private partnership facilitating development of new promising markets on the basis of high-tech solutions that will define development of the global and Russian economy in 10-15 years.

The key tool in development of the NTI includes a system of “road maps”. To develop the NTI, the RF Government adopted decree No.317 on April 18, 2016 “On Development of the National Technology Initiative”. According to the mechanism defined in the decree, “road maps” are seen as ready for implementation after they have been approved by the RF Presidential Council for Economic Modernization and Innovations of Russia. So far, they have developed and adopted such “road maps” of the NTI as “AeroNet”, “AutoNet”, “MariNet”, “NeuroNet”.