Following in the footsteps of Iron Man: student Ivan Barynkin tells how he creates an exoskeleton

In an effort to surpass their capabilities, humans are challenging biology and improving their bodies faster than evolution. And although the human body has many weaknesses, we are successfully supplementing and replenishing functions with high-tech tools. For example, exoskeletons — mechanisms capable of increasing strength by several times or giving the joy of movement to an almost paralyzed person. The most famous exoskeleton was probably Marvel’s «Iron Man», and Tony Stark’s superpowers keep inventors busy. So Ivan Barynkin, a fourth-year student at the Higher School of Mechanics and Control Processes, was inspired by the idea of creating «armor» that would turn a man into a superman. In an interview Ivan told how, yet a schoolboy, he became interested in invention, which university teachers helped him to become proficient in this business, and how his exoskeleton could be useful to the Emergency Situations Ministry. 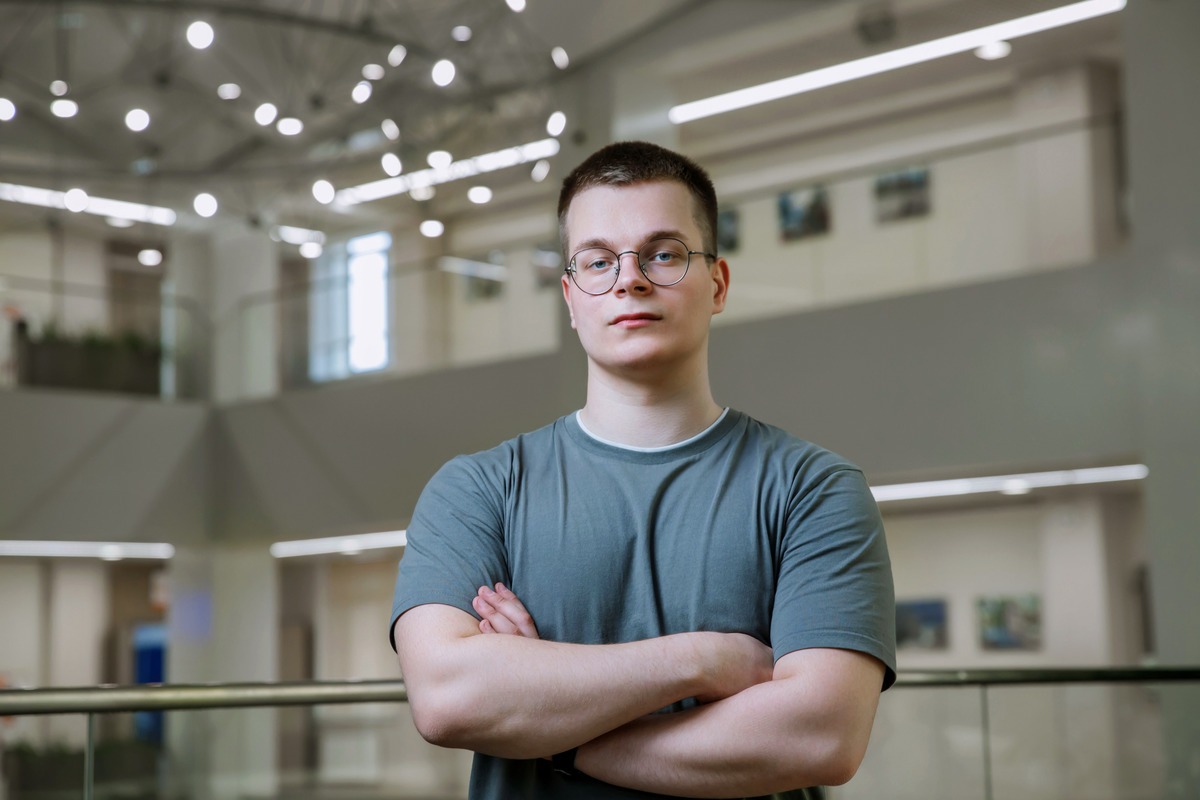 — Ivan, you probably know that the first attempts to create an exoskeleton date back to the 1890s and belong to the Russian self-taught scientist Nikolai Yagin, who invented the «elastaped» — a structure made of springs attached to a person. Tell us a little about yourself — how did you form this hobby?

— I was born in the small town of Seltso, Bryansk region. Since childhood I loved medical science, loved to watch the old program «Health» by Elena Malysheva, then, in the noughties, the program told interesting things about the human structure, diseases and their treatment methods, about modern medical equipment. I was always interested in the processes that occur in the human body. When I was 4 years old, I got an encyclopedia about human biology as a present — I read it all. When I was a preschooler, we were taken on a tour of the school, where each teacher spoke about his subject. I was fascinated by the physical and chemical experiments. I was very impressed when they showed the combustion reaction of ammonium bichromate (volcano), or the electrical discharges produced by the dynamo. After that I immediately wanted to go to the 7th grade to get closer to these sciences. 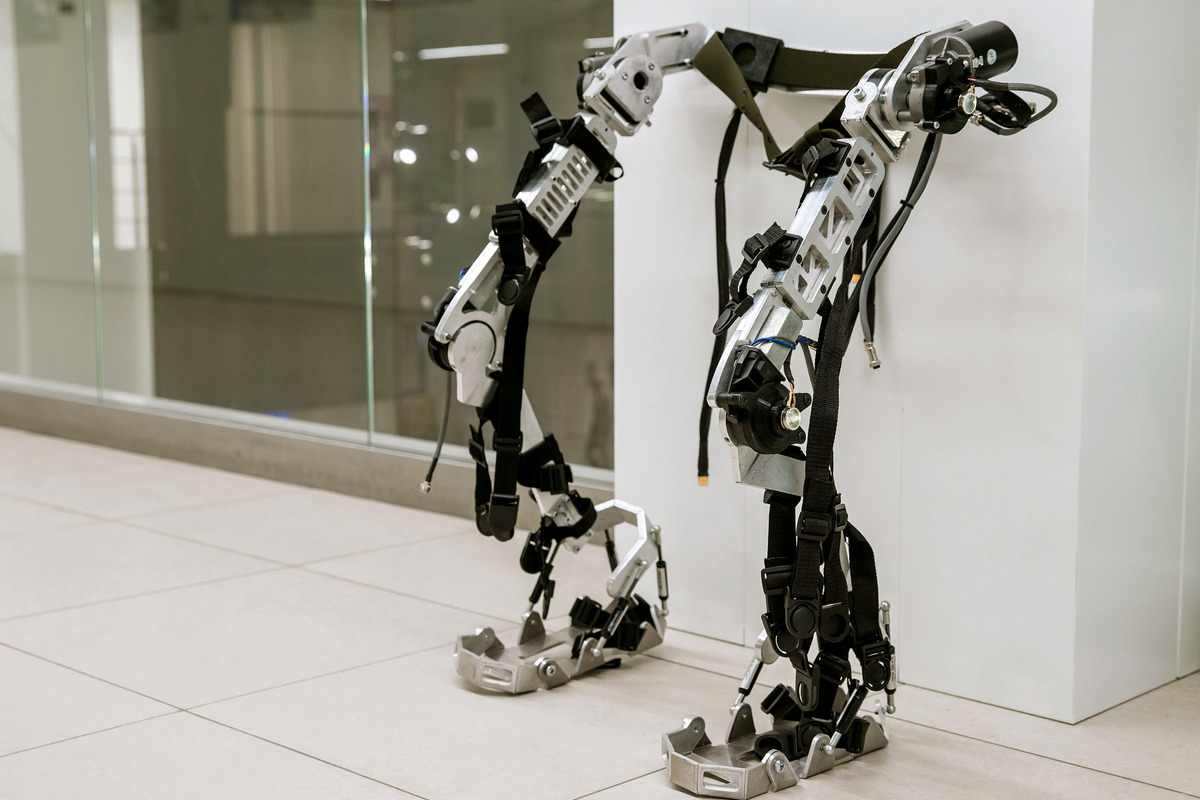 — But you had another «long» seven years of junior high and high school ahead of you. How did they go?

— Math was easy for me. After school I used to build a constructor or invent something. I had a lot of things that adults called garbage — burnt-out electronic boards, tubes, springs, some hardware, they were stored in the box, and I was constantly trying to build something out of them. When I looked at electronics, I always wanted to know how they worked. In high school, my favorite subjects were chemistry, physics, and technology, and I always had excellent grades in these subjects. I was sent to Olympiads, but I never made it beyond the municipal level. It was because of the level of education — it was good for our small school of 200 people, but not enough for the Olympiad level. On technology lessons I did failed classic tasks — cut out hammer handles and so on. I made my first inventions, and my teacher, Elena Alexandrovna, sent me with them to the Olympiad, where I always won prizes.

I «invented» an air rifle, electromagnetic Gauss rifle, and the pinnacle of my school invention was an exoskeleton arm, for which I received 2nd place at the regional Olympiad.

The time for the Unified State Examination was approaching, and I could not decide what to do next, medicine or engineering. Therefore, I chose something in between — I decided to study bionics and mechatronics. Soviet-style school teachers, who were my tutors, helped me with the exams. They prepared me very well for the exams, which allowed me to enter my favorite university.

— Why did you choose Polytechnic, this specialty?

— I fell in love with Polytechnic University when I came to the Open Day at the then Institute of Applied Mathematics and Mechanics (today — FIZMEKh. — Ed. Note.). Maxim Ye. Frolov and Natalia Yu. Ermakova impressed me, a tenth-grader, with stories about their research. I especially liked the fact that the MCP department deals not only with mechanics, but also with control. This was a key point.

— Soon the department became the Higher School of Mechanics and Control Processes. What does studying there give you?

— Studying at the MCP was hard at first, especially higher mathematics. My level of training was sufficient to pass the Unified State Exam, but not for the first year of my degree. In the first year, I first learned about complex numbers, matrices and other elements. I was way behind my fellow students from lyceums, and often worried about this. But when physics and theoretical engineering began, I already felt like a fish in water. Studying at the MCP first of all was the ability to see the interrelationships in nature, you could say, to feel how one science is connected to another. Also the department taught me to build mathematical models of real objects, which is very important in engineering. 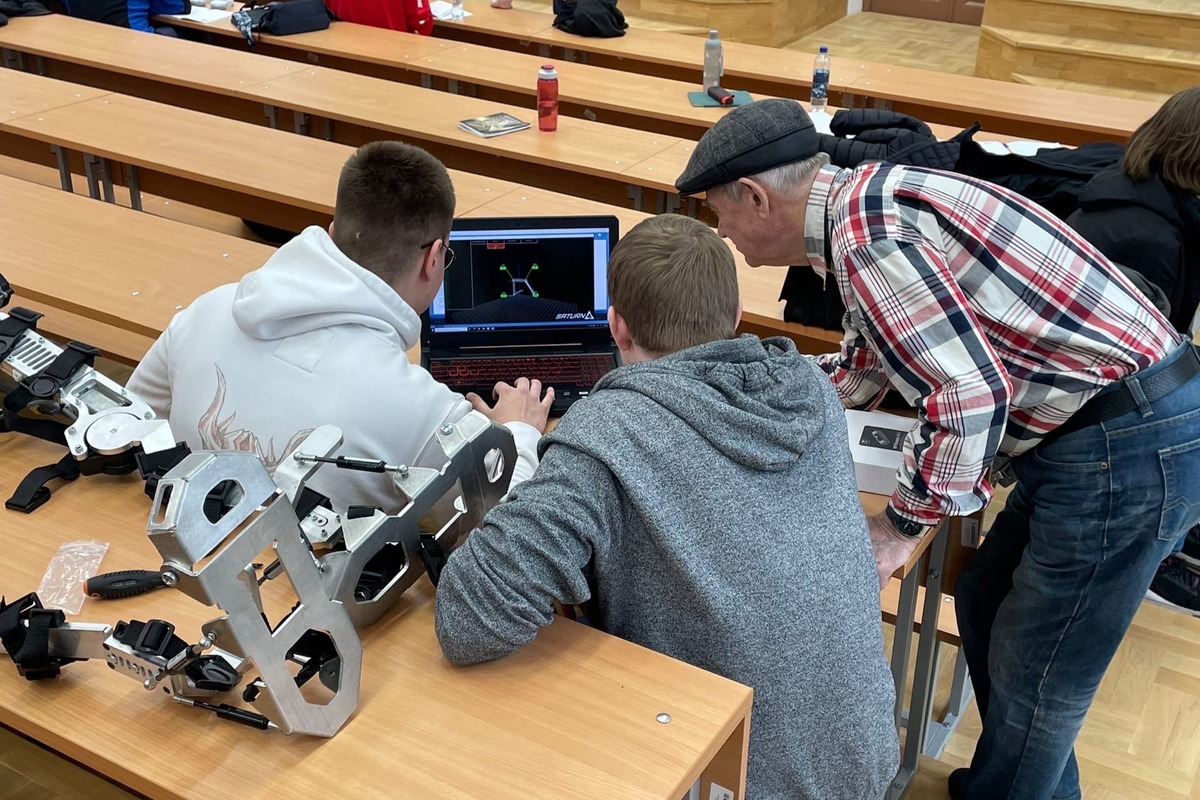 — What other subjects besides physics and theorematics do you like?

— There are many favorite subjects. I like strength of materials (sopromat), which is perfectly taught by Natalya Ermakova. Her presentation is very clear, and it is also one of the favorite subjects for most kids. Anton Krivtsov’s Theoretical Mechanics is always presented with humor and funny drawings on the blackboard, which always made the class laugh. The theory of vibrations and analytical dynamics of Alexei S. Smirnov, his extremely practical approach is extremely clear and understandable. The lectures were also not devoid of humor and a friendly atmosphere. But my personal favorite is the theory of automatic control, taught by Alexander A. Sukhanov and Sergey F. Burdakov, which I still do not fully understand.

— Did the knowledge you received at university help you in creating the exoskeleton?

— The department played the main role in creating the exoskeleton. Rather, it was the people who work there. Since Alexander K. Belyaev became director, a lot of perspectives have opened up at MCP, which help in my inventions. My supervisor, Alexei S. Smirnov, has always supported me in creating the device. We often discuss improvements to the mathematical model and design with him. He helps me both in word and deed, often encourages me, chases away my doubts. On this ground we became close friends and comrades.

— Still, it is interesting how ideas like that come about, how to create an exoskeleton? What motivates you to do it?

— The idea came about after watching the movie «Iron Man». It is probably the starting point for most «exoskeletonists». The movie is awesome, especially the Tony Stark suit. It’s such an image of a confident man, a genius who understands all things technical. I remember discussing it with a childhood friend and coming to the conclusion that we should study math, physics, and chemistry well. The movie is partly what made me understand most of the sciences, not just engineering. Creating an exoskeleton is a multidisciplinary task. Something needs to be learned from anatomy, something from biomechanics, electronics, mechanics, programming. 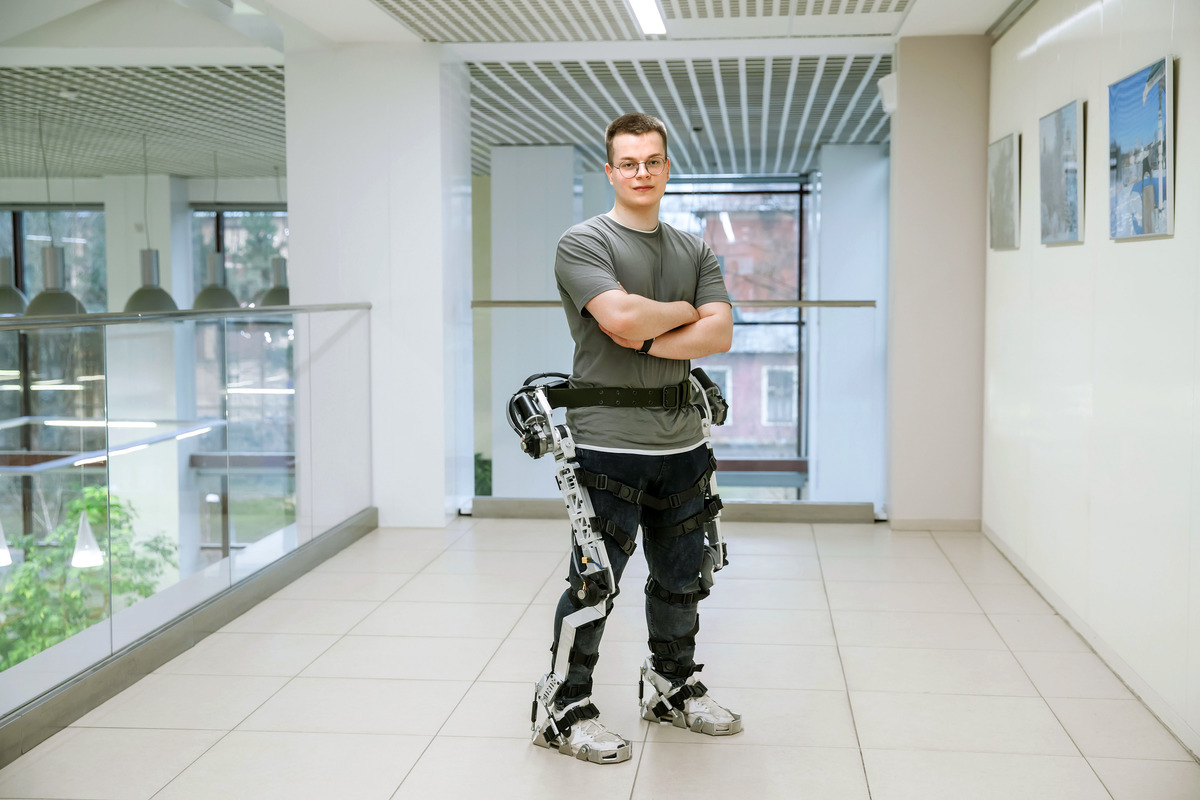 — What are you building the exoskeleton for, what will it be useful for?

— The exoskeleton is planned to be created as a base for various subspecies of other specialized exoskeletons. For example, in cars, the basis is the engine, the transmission and the power frame, and then you can have a truck or a sports car. It’s the same here: first we create the base, and then additional modules for different tasks. An exoskeleton can help the military during marching, landing, for unloading the musculoskeletal system. It will help warehouse workers reduce injuries during unloading and loading-unloading operations and increase the volume of loading and unloading. For medical purposes — to help children and adults with cerebral palsy in upright mobility, paralyzed people in rehabilitation. Even for the Ministry of Emergency Situations, if you need to quickly clear debris or deliver medicine and supplies to places difficult to pass.

— How much time was spent on the development?

— The first version took about a year. It was so slow because I earn money for development on my own, having got a job as a production engineer. And I do the project by myself, inventing the electronics and mechanics myself. Parts are made according to my drawings from the material I bring in.

— What materials is the exoskeleton made of?

— Aluminum alloy AD31. It’s not the best, but... It is difficult for a person without decent financing to obtain higher quality materials on a small scale and at a low price. So we have to experiment. 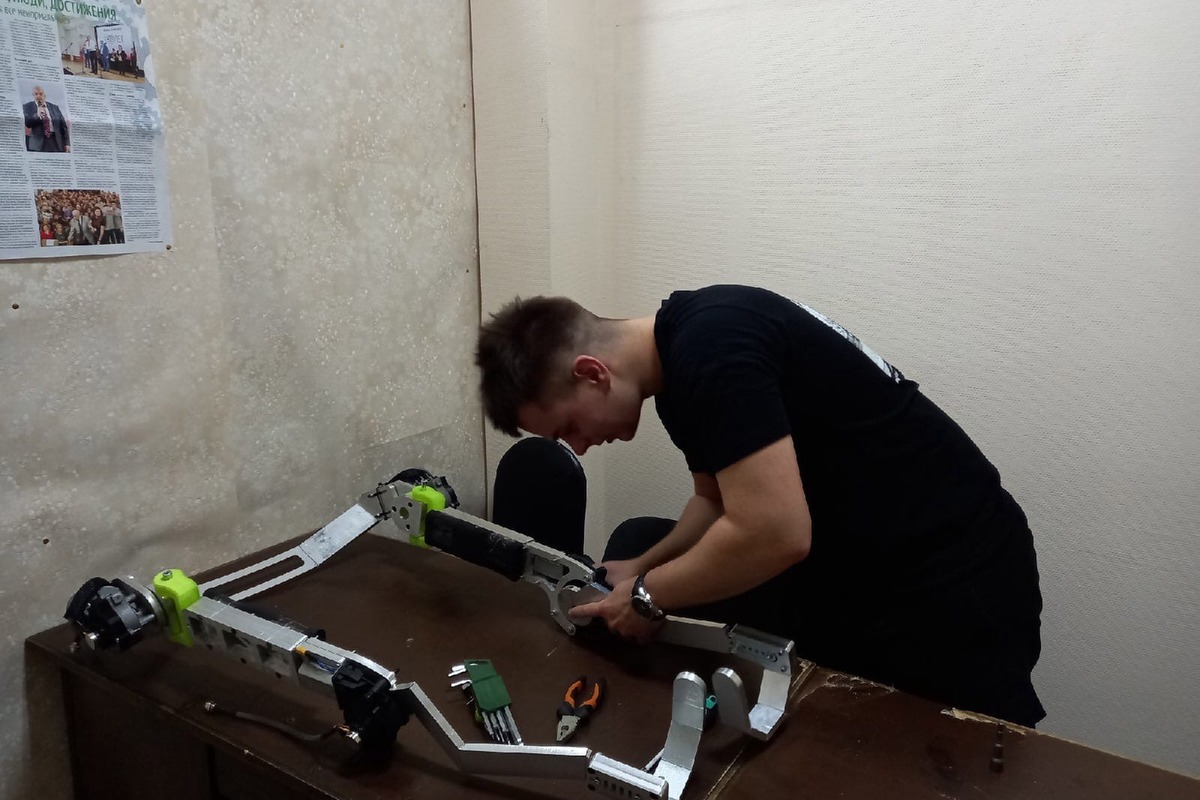 — How do your parents and friends feel about your invention?

— My relatives support me in my research, they even try to help me financially, but I refuse. They support me and often listen to my stories about my research and invention successes over a cup of tea. And my friends are already looking forward to the exoskeleton being ready, they want to try to walk in it. My girlfriend Anya also supports my activities, she even made calculations to find the weight of individual limbs of my body, which helped me a lot in my research. I am grateful to her, and I want to tell her that I love her.

— Ivan, are you ready to share your future plans?

— My plans for the future are to create a laboratory of controlled movements on the basis of MCP, I want to develop the direction of control, because it is a trademark of the department! The exoskeleton will also be finalized there. We will continue to work on the startup and obtain funding from investors. For now, we are looking for interested people from various civilian spheres in our country. We are also planning to test the design. And then, who knows, maybe a second, cooler version of the exoskeleton will appear. The department’s employees are interested in the improvements and promotion of the device. 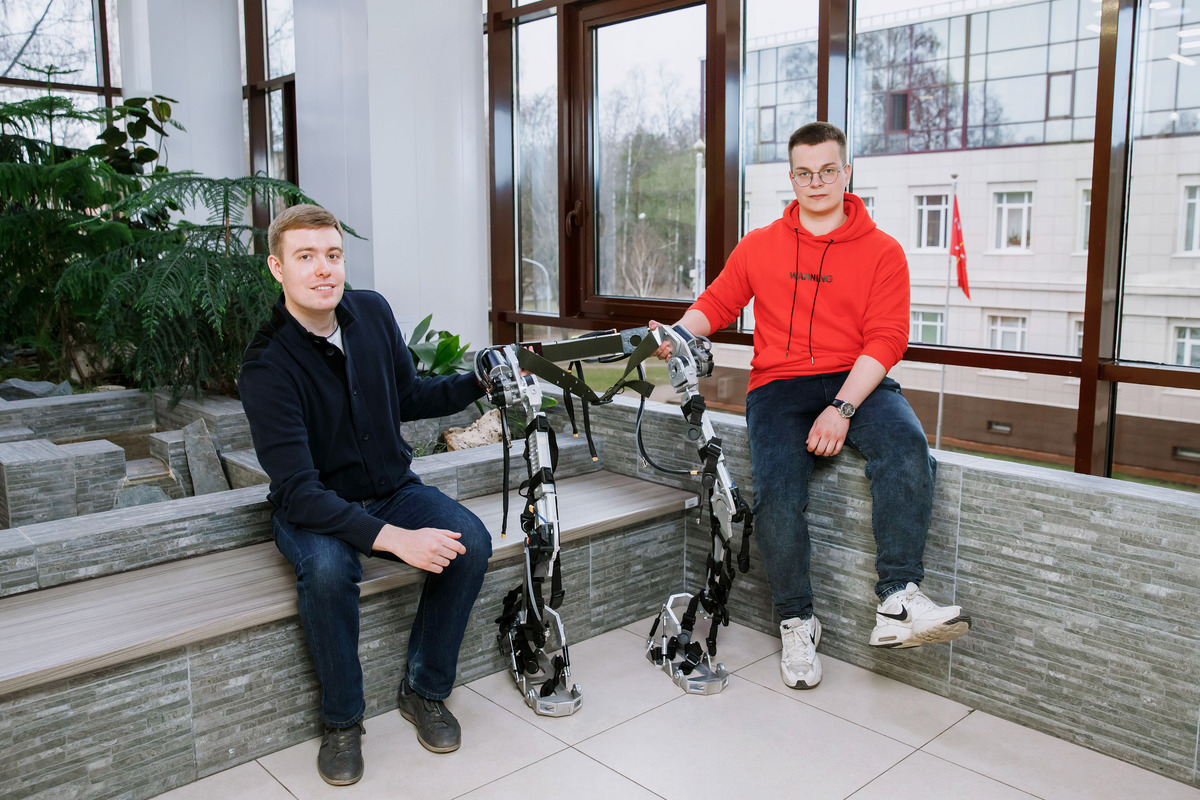 — The Russian exoskeleton market is just emerging and taking shape, but already now, Ivan, we can confidently say that it has a future. Good luck with your development and thank you for the conversation.