On March 27 they summed up the results of St. Petersburg Technical Fair competition program – a prestigious contest of innovative development projects of universities, research institutes and enterprises of St. Petersburg and other Russian regions.

This year, more than 180 innovative projects and scientific developments were presented for the contest in such nominations as instrumentation, medicine, engineering, IT, energy development and others.

During the contest, the Polytechnic University presented 13 projects, seven of which have been developed by the university departments and start-ups, as well as joint projects of the university and industrial enterprises. Six more projects were submitted for the contest by the Computer Engineering Center of SPbPU.

According to the results of the contest, SPbPU became one of the leaders given the number of awards: the university received 9 gold and 2 silver medals, as well as a special prize, which marked special achievements of the Engineering Center’s developers. 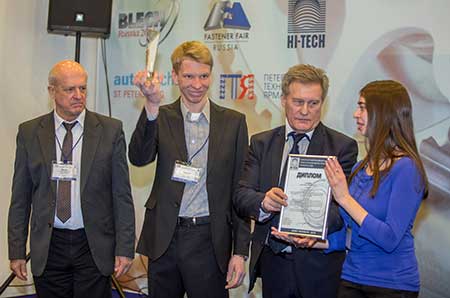 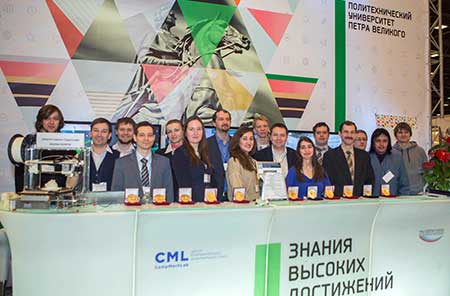 The following projects were awarded with gold medals and first place diplomas:

In the nomination “Mechanical Engineering” the winner project is ‘Technology and equipment to improve durability of threaded part of oil-well tubings’ developed by “Welding and Laser Technologies” department’s team under the leadership of P.A. Topolyansky. The project aims to increase the life of tubings used in oil and gas industry during drilling and operation of wells. To achieve this, a technology is proposed to apply wear-resistant and anti-friction coating on threaded parts of tubings.

In the nomination “Energy Development” the winner project is ‘Turbo-expander generator for gas distribution stations’, developed by an author team of the department “Turbines, Hydro Machines and Aircraft Engines”, lead by Prof. A. Rassokhin. The expander-generator is based on high performance economical turbine of LPI design with a large relative pitch. The distinctive features of these turbine stages are large angles of flow deflection in the runner, a small number of nozzle and rotating blades, increased erosion resistance. The main advantage compared to traditional turbines is a considerably lower loss of kinetic energy, which leads to increased effectiveness of the plant.

In the nomination “Information Technology” the winner project is ‘Microcontrollers for control systems with hardware support of artificial intelligence’, developed by an author team of the research and education center “Embedded Automation Systems and Computer Engineering”, lead by A.E. Vasiliev. The system allows application developers to design microcontrollers with hardware blocks to compute complex functional dependencies (in particular, odd functions), which provide high performance of adaptive embedded real-time control systems.

The company ‘Fotomekhanika’, which develops comprehensive solutions for 3D and 360-photography, aerial photography, produces equipment and software, became the best innovative youth project. The project was implemented by graduates of the department “Theoretical Mechanics” under the leadership of Sergey Le-Zakharov.

‘Printer based on additive technology’, joint project of the technology park “Polytechnic” and “LPM-mechanics” was awarded with a silver medal. The printer is based on the FDM (Fused deposition modeling) technology – technology of additive manufacturing, which is widely used to create 3D-models, in prototyping and industrial production. The FDM technology implies the creating three-dimensional objects by laying down material in layers, conforming to the contours of the digital model.

Another silver prize winner is the project ‘Network model of cooperation between educational institutions and enterprises’ developed by a team under the leadership of S.V. Kalmikova. The project is aimed at reducing the cost of industrial products through application of a networking communication model of industrial enterprises and institutions of professional education that involves the use of ontological engineering principles and mathematical simulation.

The project ‘Management system in CML-Bench™ computer engineering, intended for automation of engineering calculations, assembly, processing and cataloging of models and design variants, preparation of make files, processing and presentation of results’ has been awarded with a special prize in the nomination of “Information Technology”. CML-Bench™ is a unique SPDM-system (Simulation and Process Data Management), allowing automated execution of engineering analysis, structuring all simulation models and options, simplifying work with the simulation models database, results of calculations and computed variants, improving the capability of presenting and comparing the outcomes of engineering work.

‘Methods of technological transfer of complete cycle in the field of computer engineering, which provides creation of high-tech suprasectoral technological chains with high value added of intellectual know-how, as well as specialized techniques and algorithms of solving supercomplex industrial challenges’ was awarded gold medals and first place diploma in the same nomination. The technique provides the creation of effective high-tech suprasectoral technological chains which make it possible to minimize the development planning cycle and the time of launching the product into the market, to optimize the structure being developed or design of any complexity.

Three projects of the Computer Engineering Center of SPbPU won gold medals in the nomination “Mechanical Engineering”, including:

‘Development of full-scale detailed high-tech simulation models of designs, machines and devices to develop a new generation of high-tech products in different sectors of the national industry’. The developed models are used to create design documentation and produce modern competitive goods domestically, for example, Russia's short and medium-haul passenger plane MS-21, Russia's first catamaran made of a composite material for the needs of passenger water transport, deck arresting gear on the modern national aircraft carrier for the Indian Navy “INS Vikramaditya”.

‘Creation of simulation techniques for development and analysis of competitive and in-demand products of the new generation - an advanced high-speed helicopter’. The techniques are based on verification and validation of complex mathematical models according to the outcomes of natural experiments and the results presented in literature. The techniques developed are intended for achieving the properties and parameters of the new generation technology the Russian industry faces in this field for the first time.

‘The technique for analyzing the causes of emergency situations, reconstruction of the sequence of emergency events, creation and estimated validation of directive technologies for repair work of engineering structures and objects of any complexity in the shortest possible time’.

In practice, the technique, allows avoiding accidents, preventing failures of similar objects, predicting and simulating the emergency situations, accidents, industrial disasters and helping prevent their occurrence. The results of the analysis and recommendations for improving the structures and design allows, in the shortest possible time, to get ahead of import in the field of engineering and manufacture of equipment and components needed to ensure uninterrupted and trouble-free functioning of key industrial projects in all high-tech sectors of the economy.

‘CML Safety Suit virtual test site which includes digital models of anthropomorphic dummies, barriers and impactors as well as a software package used to analyze the results and facilitate predictive modelling of crashes and optimize motor vehicle design to ensure human safety’ was the winner of ‘Security Equipment». CML Safety Suit is a developed, verified and validated complex of virtual testing equipment for human safety assessment on vehicles (according to the regulations of UNECE, FMVSS, ranking testing of EuroNCAP, IIHS, etc.) as part of digital models of anthropomorphic dummies, impactors, barriers, restraint system facilities.

In general, according to the organizers of the contest, all the participants demonstrated a very high level of projects. S.P. Faleev, the chairman of the contest expert committee, pointed out the market orientation of the presented projects, most of which already have customers among industrial enterprises and the mass sector.