Research and Technical Problems of Photonic Technologies were Discussed in SPbPU

On March 27, 2015 a session of Scientific and Technical Council of the North-West Center for Development of Science, Technology and Education in the interests of national defense and security by scientific and technical issues of photonics technologies took place in Peter the Great Saint-Petersburg Polytechnic University. 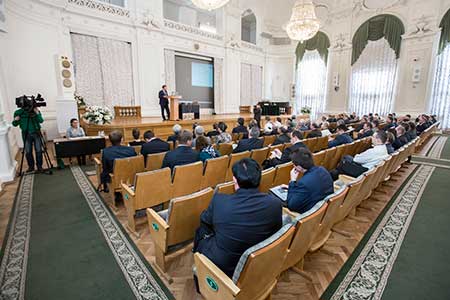 The experts who gathered at the meeting, including representatives of the ministries, foundations, organizations of the defense industry sector, institutions of the Russian Academy of Sciences and universities: there were about 70 people altogether, who discussed prospects for development of technologies and systems for branch support, issues related to implementation of development projects into industry. The following people participated in the meeting on behalf of the Polytechnic University: the first Vice Rector V.V. Glukhov, the Director of Joint Institute of Science and Technology of SPbPU M.A. Odnoblyudov, the Director of the Institute of Physics, Nanotechnology and Telecommunications of SPbPU S.B.Makarov.

Opening the meeting, Chairman of the Scientific and Technical Council of the Military Industrial Committee of the Russian Federation, Deputy Chair of the Board of the Military-Industrial Commission of the Russian Federation, Acting President of the Russian Academy of Sciences Yuri Mikhailovich Mikhailov noted that Russia, having high scientific potential in the field of photonics, yields significantly to other countries in terms of the scales of its practical use, while photonics is one of the six main providing technologies in Europe, and a technology of primary importance in the USA. It is obvious that for a breakthrough in this technological direction, powerful concentration of scientific and production resources is necessary. Replacement of information transfer by means of electric or electromagnetic impulses on its transfer by means of light waves will become truly revolutionary. Herewith, photonics is not going to replace electronics. It will expand its opportunities and will significantly amplify it. The use of photons to transfer and process information will allow creating computers, hundredfold quicker than the most powerful ones existing today given that they will be thousand times smaller in size. 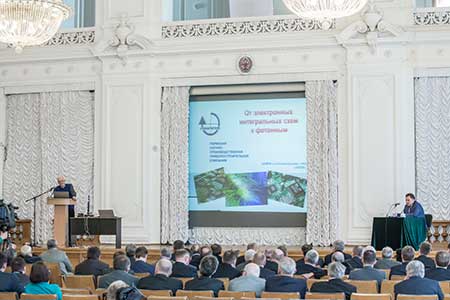 Modern developments in the field of photonics were presented by the heads of leading research institutes and industrial enterprises, scientists of specialized laboratories of Saint-Petersburg universities: SPbPU, ITMO University, Saint Petersburg Electrotechnical University “LETI”, the Ioffe Institute, etc. The Representatives of the Ministry of Industry and Trade and Ministry of Education and Science of the Russian Federation spoke about the creation of industrial photonic technologies within the current state programs of the Russian Federation, in particular, the “Development of Science and Technologies in 2013-2020” program.

The following presentations were made on scientific and technical issues of photonics technologies, their use in armament products, military and special equipment: “Development of New Technologies for Manufacturing Photon IC Chips” (PhD in Economics, Director of the Institute of Radio-Photonics, Perm Research and Production Company, V. K. Struk), “Radio-Photon Element Based Ultrabroadband Super-High Frequency Devices” (PhD in Engineering Sciences, employee of the department of Physical Electronics and Technology, Saint Petersburg Electrotechnical University “LETI”, A.K. Mikhailov); “Additive Technologies as Applied Capabilities of Photonics” (Deputy Director General, JSC “Objedinennaya Dvigatelestroitelnaya Korporatsia” (rus. for: United Engine-Building Corporation) D.U. Kolodyazhny; “Prospects of Interchip Photon Coupling on the Basis of Vertically Radiating Lasers” (Doctor of Physical and Mathematical Sciences, Corresponding Member of the Russian Academy of Sciences, Deputy Director of the Ioffe Institute of the Russian Academy of Sciences, V.M. Ustinov); “Development of Radio-Photonic Component Base for Creation of Modern Optical Analog Data Digitizers” (Doctor of Physical and Mathematical Sciences, Chair of the department of Modern Functional Materials, ITMO University, member of the working group of the Science and Engineering Board of the Military-Industrial Commission of the Russian Federation on problematic issues of radio-photonics, V. E. Bugrov).

Besides concrete innovative developments, the participants of the meeting also discussed organizational aspects of the branch. Director General of “ElTech SPb” A.V.Troshin presented a concept of the Center for transfer of photonics technologies in the structure of Saint-Petersburg technological hub, Director of Joint Scientific Technology Institute of SPbPU M.A. Odnoblyudov spoke about development of the “road map” on photonics. Academic advisor on Radio-Photonics Development of JSC RTI, A.N. Shulunov made a presentation on the problems related to creation of the program of radio-photonics development and use.

The materials of the presentations, the nature and content of the subsequent discussions confirm the relevance of the projects and demonstrate a deep involvement of the representatives of the Ministry of Defense and Ministry of Industry and Trade of the Russian Federation, management of the integrated structures of the defense industry complex and leading scientific centers in photonics technologies problem-solving.