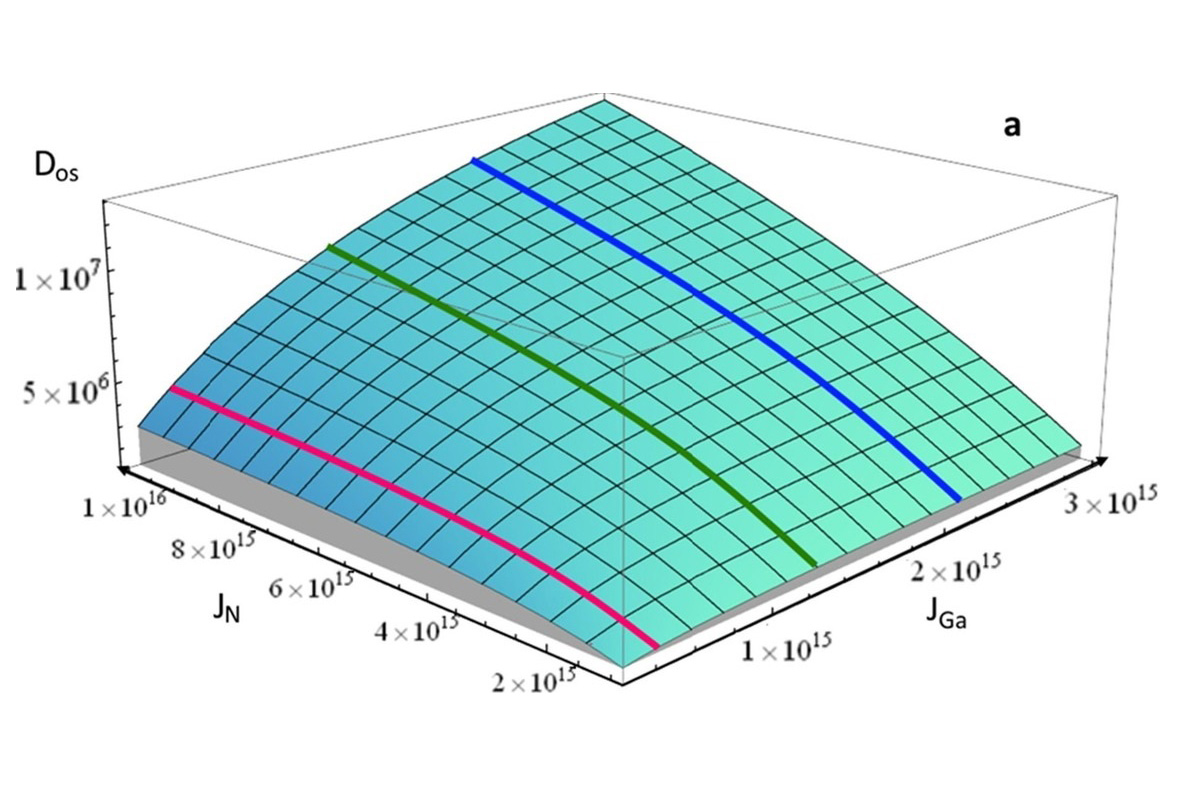 In this study the growth of a multicomponent crystal from its vapors via Burton-Cabrera-Frank mechanism was considered. Equations for the rate of advance of a group of equidistant steps were derived. The spiral growth rate of the crystal was found. It was shown that the growth of the multicomponent crystal can be described mathematically in the same way as the growth of a single-component crystal using a few generalized parameters: diffusion coefficient, supersaturations, each of which depends on properties of all individual crystal components. These coefficients are not constant at a given temperature as in the single-component case and are dependent on the conditions in which the crystal grows: partial pressures of components and their concentrations on the surface.

As an example, the theory was applied to describe gallium nitride crystal growth. The study was conducted in collaboration with Institute for problems in mechanical engineering (Saint-Petersburg, Russia). 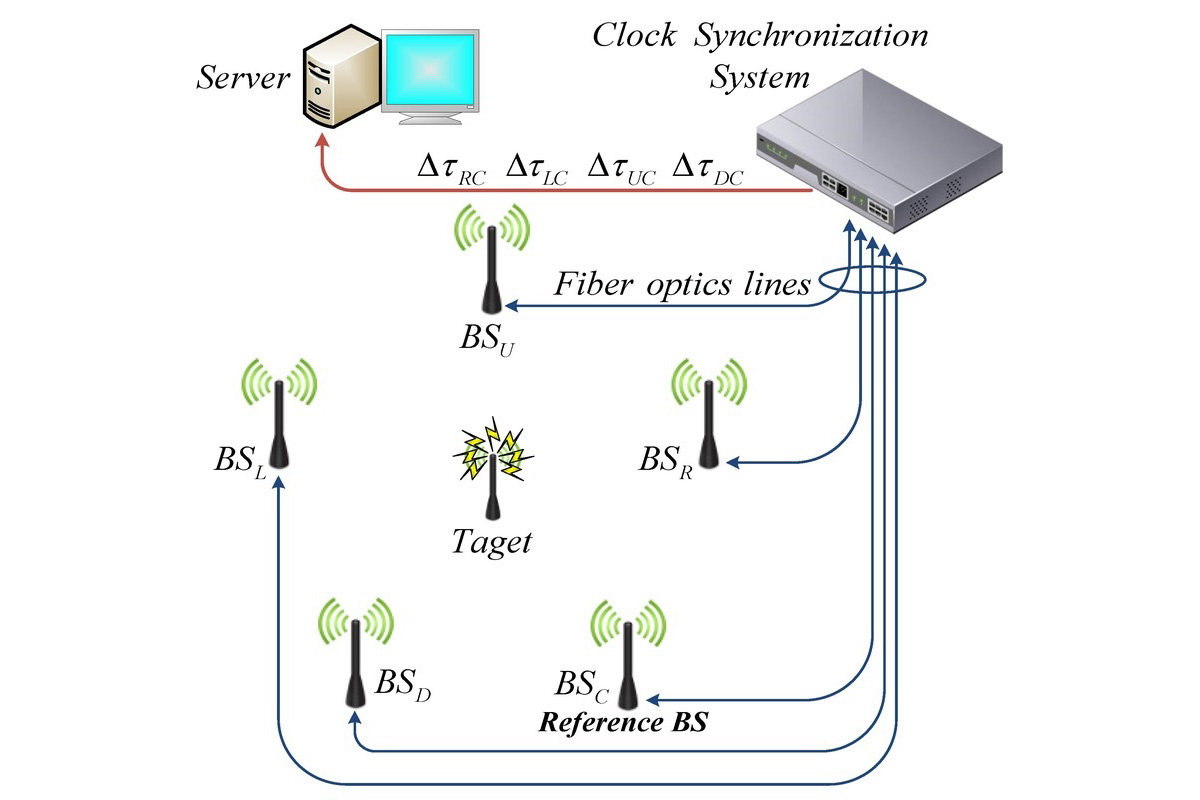 Accurate remote determination of the object coordinates in 3D space is one of the main questions in many applications. In one of the most popular methods, such determination of the location of an object uses the measurement by receiving an electromagnetic signal transmitted by several spatially distributed base stations (BS). The main problem is that it is necessary to reduce errors and computation time.

To overcome these difficulties, scientists from SPbPU proposed an analytical method for determining the position of an object based on the analysis of time difference of arrival (TDoA) of signals from the transmitter of the object to the receivers of the BS. One of the main advantages of this method is that it is possible to eliminate the ambiguity in determining the coordinates of the object in space and to increase the accuracy of determining the coordinates when the TDoA measurement between base stations fluctuates. Applications for autonomous automotive vehicles and space-based positioning systems were analyzed in this study. 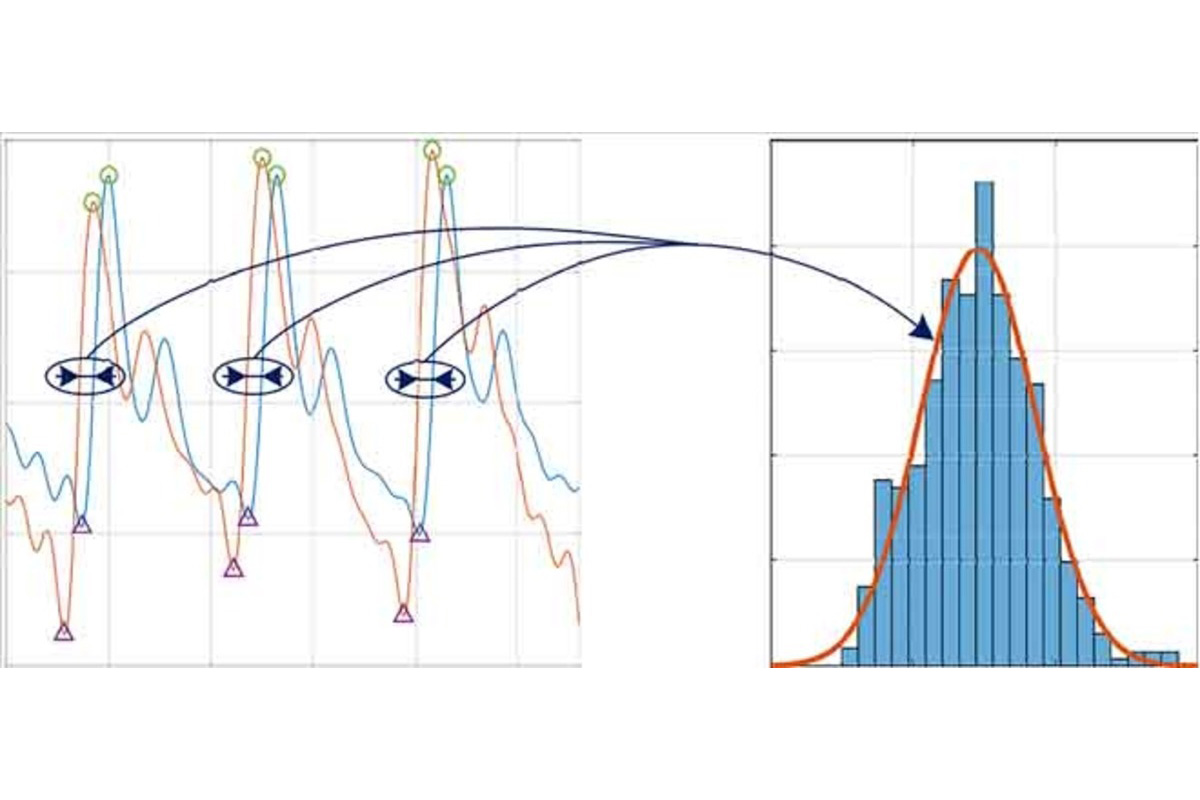 This paper presents an approach to noninvasively measure pulse wave delay and velocity by means of two multiplexed fiber-optic Fabry-Perot interferometric sensors interrogated by means of spectral interferometry. The pulse wave signals were measured with 1 kHz sampling rate. The obtained optical path difference resolutions are on the order of tens picometers, which allowed the pulse wave signal features as small as 100 pm to be clearly observed in the demodulated waveforms. The pulse wave velocity between different arteries was measured, demonstrating good agreement with the known data, where applicable.

The paper also presents a mathematical model based on Cramer-Rao approach, describing the fundamental resolution limits of the pulse wave delay measurement. The derived mathematical model is not limited to fiber-optic pulse wave sensors and can be used for estimating the performance of other systems, such as photoplethysmographic and ultrasound. This work paves the way to development of novel all-optical non-invasive systems for medical diagnostics and vital signs monitoring, including portable devices. 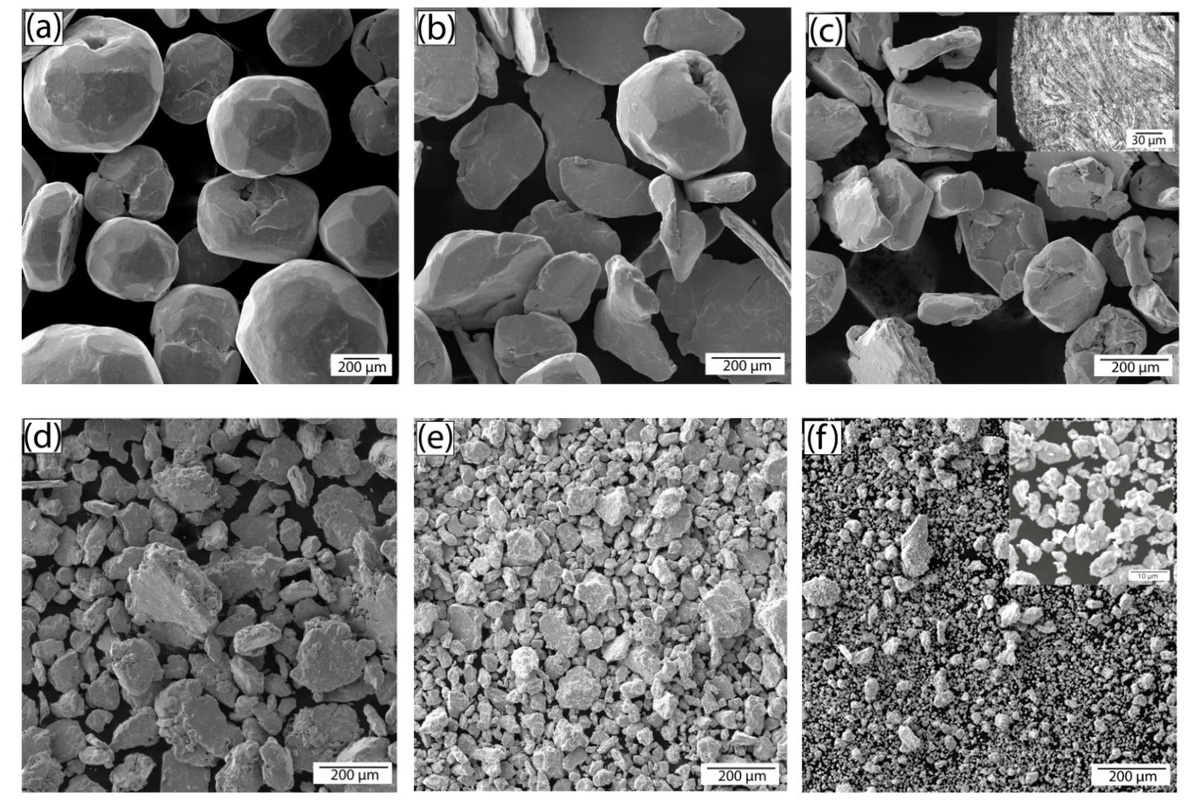 In this study copper-based composite materials were fabricated using powder technology out of Cu powder and 0.25–5.00 wt. % fullerene soot. The microstructure of the composite powders and the compacts prepared with their usage were examined by different types of microscopy. Hardness, heat conductivity, and tribological characteristics were measured.

The interesting feature of the observed microstructure was a “marble” pattern formed by a white boundary net. The study shows homogeneous distribution of carbon inside the copper grains and its lower concentration in the grain boundaries. The effect was caused by a reaction of carbon with oxygen adsorbed by the copper particles surface. The study was conducted together with colleagues from Hebei University of Technology (China). 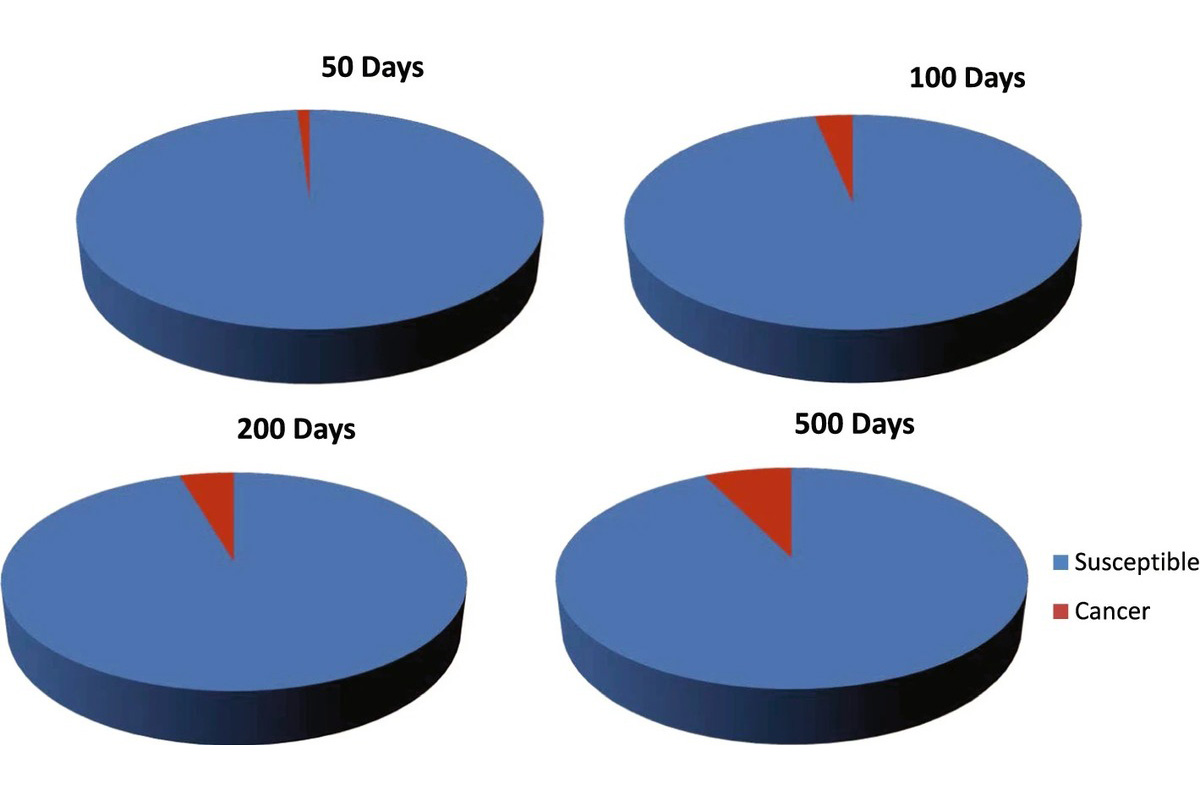 This model gives a framework for understanding how early diagnosis increases the chances for cancer patients to be cancer free by providing proper treatment. Researchers analyzed and compared the local stability of the equilibrium points of both the systems in the presence and absence of diagnosis. They investigate analytically as well as numerically the causal effect of diagnosis for reducing the cancer patient at an early stage. Furthermore, they enhance the role of diagnosis by using optimal control strategies to prevent the cervical cancer. The study was conducted together with researchers from Jadavpur University (India) and Guelma University (Algeria). 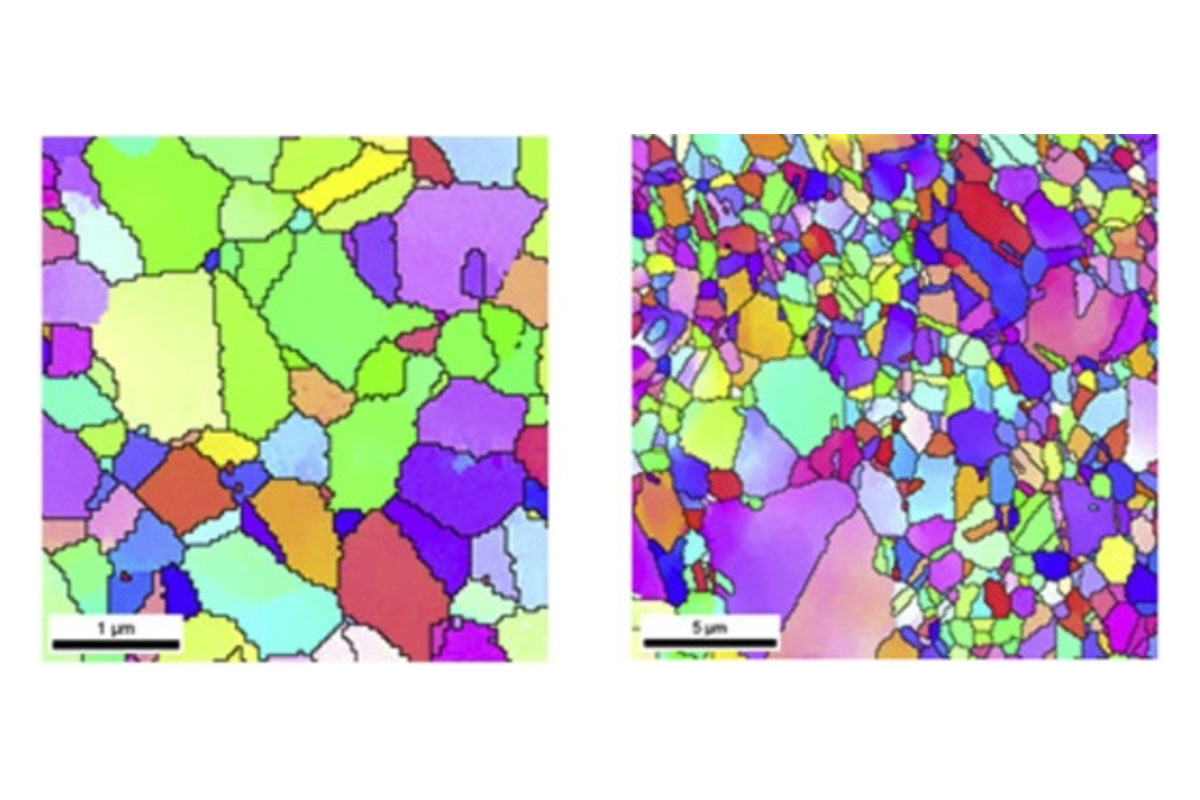 Bulk nickel-graphene (Ni-Gr) composites are in the high demand for most of the engineering applications. Despite many efforts made, the main problem remains the homogeneous dispersion of graphene into the Ni matrix without destroying the structural integrity of Gr. This paper addresses the fabrication, structural features and mechanical characteristics of bulk Ni-Gr composites, manufactured from nanosized nickel powder and exfoliated graphite platelets (GP) via modified powder metallurgy procedure including micromechanical GP splitting.

Publisher: Journal of Alloys and Compounds