SPbSPU submitted the projects at the festival of "VKontakte"

The Polytechnic University presented its projects at the Festival of "VKontakte" social network which took place in the Park of the 300 Anniversary of St. Petersburg in the middle of July. For two days tens of thousands of people witnessed an event which was unprecedented in terms of its scale and intensity of the program. Igor Asonov, the director of the Youth Technical Creativity Center which includes this unique industrial laboratory called "Fablab Politekh" as its sub-division, told us about this event, projects which were shown there by the Politechnic University, and about what "Fablab Politekh" is in general .

- Igor, how was the festival going?

- The territory of the huge park was divided into more than ten thematic platforms, from the area "Education" where successful speakers gave their lectures and master classes in an informal setting, and "Extreme" with competitions in skateboarding and parkour, to the zone "Charity" where the guests, respectively, participated in charity events, and "Drive" with an exhibition of vintage and collection cars. The Polytechnic University took part in the zone "Innovations" where robots, virtual reality gadgets, futuristic transport, surprising experiments and many other things were presented. I was the curator of the zone "Innovations" and, of course, I couldn’t imagine it without a stand of the Polytechnic University. 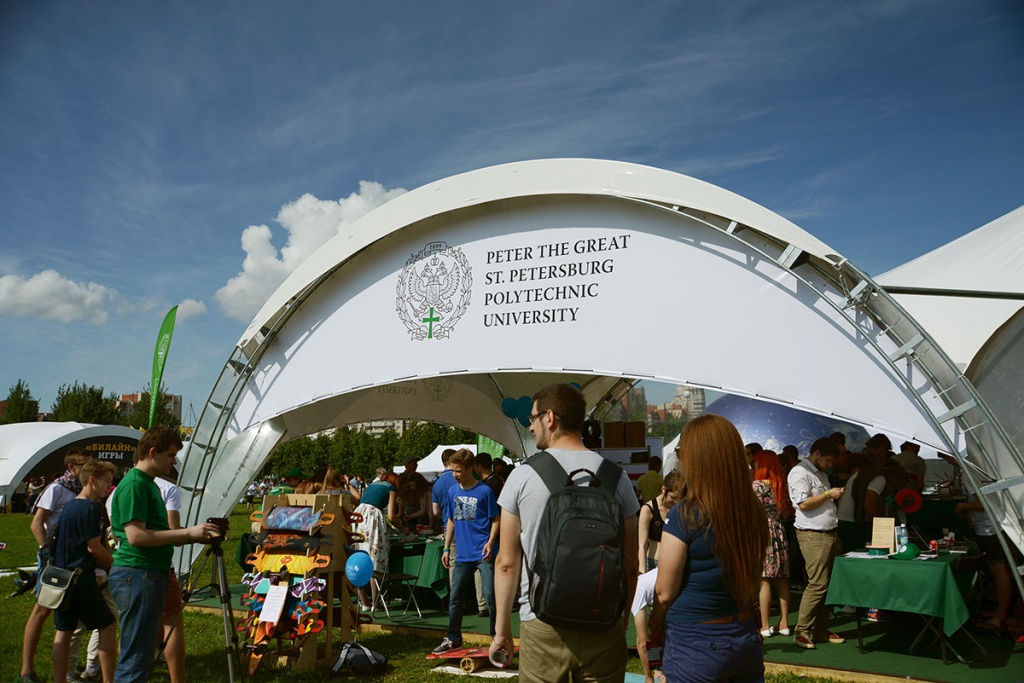 - What exactly did you demonstrate to the guests of the festival?

- The tent of the Polytechnic University represented school and university students’ projects - more than ten interactive exhibits, including a controlled robotized hand and "smart" quadcopter. Members of Polytech NCM team showed its creation - a real race car - to the general public. In addition, there were presented 3D - printers and electrobicycles, longbords and balancebords which were fully designed, assembled and manually painted in the "Fablab Politekh", and many other things. 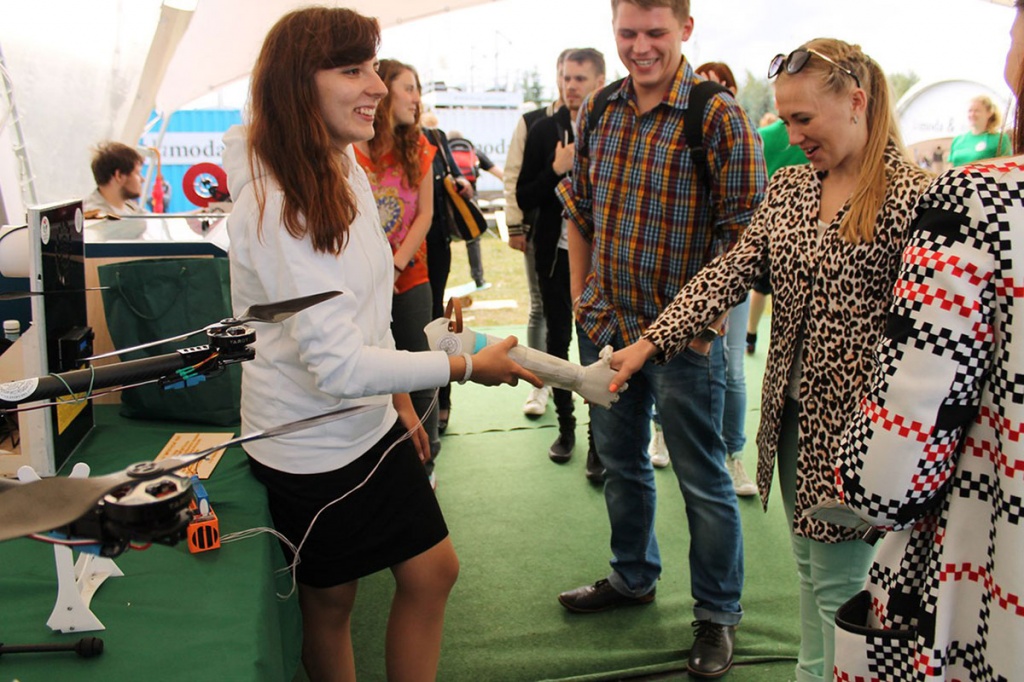 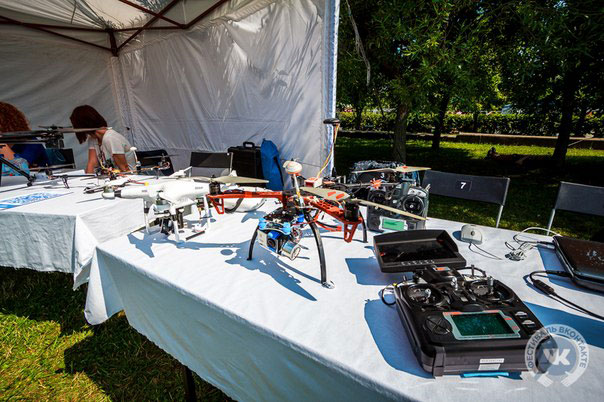 - Could the visitors just look at all these exhibits?

- Of course not. They could easily test a balanceboard, if they wanted. In the tent of Polytech it was also possible to get an exclusive print on aT-shirt, to print a keychain on a 3D - printer or to make an engraving on the phone. The visitors could also take part in competitions and drawing of lottery.

- Could you tell us in more detail about what caused the greatest interest of the guests?

- Visitors of the festival were mostly interested in workshops, electrobicycles and engraving of various designs on their phones. Some workshops are worth special noticing such as marbling of wooden products made on the laser machine and a program by LeninCraft project creators in which everyone could try hand as a digital architect and learn to create any objects from scratch. The founder of LeninCraft project, Alexander Sosnovskikh told us about different types of 3D -photo and of 3D print technology: what it is, where it comes from and why it was developed. For example, in order to learn how to keep family rarities and to copy the items which you like, you just needed a conventional camera and a laptop (or a notebook for writing the sequence of actions). 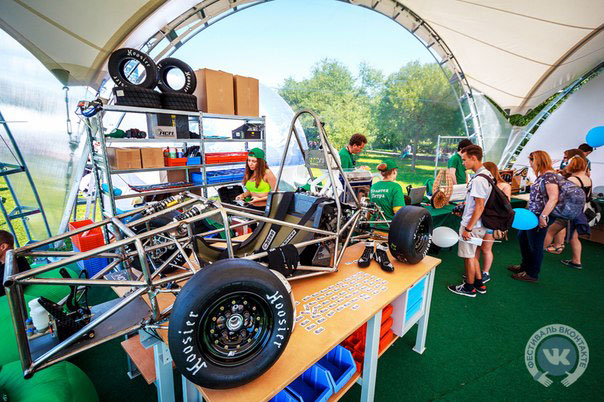 - In general, the idea of fablab has settled in our life. What do you think is the reason for that?

- These unique production laboratories appeared in the early 2000s so as to give a chance to everyone to be engaged in technical creativity. Common people, especially young people, have no opportunity to spend several million rubles on expensive digital production equipment. But they can come to us and use our machines. Today there are more than fifty similar creative workshops in Russia, and "Fablab Politekh" is one of the leading platforms.

- How did you manage to start?

- In 2012 our team won a competition announced by the Committee of Economic Development, Industrial Policy and Trade of St. Petersburg and received a subsidy of five million rubles to purchase the equipment. Half of the money was given by the Committee, another half by the Ministry of Economic Development of the Russian Federation. These funds and also financing from the Polytechnic University helped to start, but at first we went to Barcelona and visited one of the strongest fablab, where we learned about the most advanced experience in the world.

- Thus, your ideas are supported at the highest level?

- Yes, they are. In May last year I managed to meet Dmitry Anatolyevich Medvedev and asked him to support the youth innovative creativity centers, in terms of their design and academic activity. The head of the government gave his promise, and soon the Small Business Assistance Fund in the scientific and technical sphere announced the competition "Involvement of Youth in Innovative Activity" with winners getting financial support of their projects. In May this year at the opening ceremony of science and technology park of MIPT I personally expressed my gratitude to Dmitry Anatolyevich for supporting the creative youth. He made a joke saying that "sometimes it makes sense to be in the government".