Consul for Science and Technology of the PRC in St.Petersburg Miao Yuan and Rector of SPbPU A.I.Rudskoy Discussed the Cooperation Prospects

The establishment of Peter the Great St.Petersburg Polytechnic University's office in Shanghai is a wise and promising decision, said Miao Yuan, Consul for Science and Technology of the General Consulate of the PRC in St. Petersburg, during his visit to SPbPU. At the meeting with Rector A.I. Rudskoy, which took place on the 30th of March 2016, the parties discussed more effective mechanisms and prospects of cooperation, which are opening due to the establishment of SPbPU's office in Shanghai. 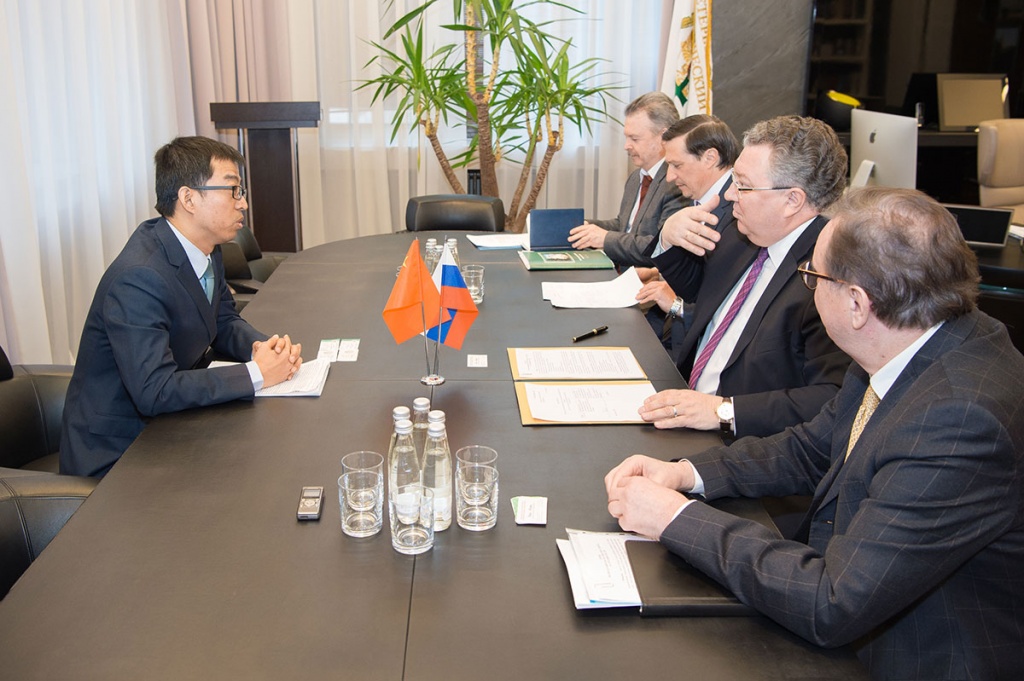 At the beginning of the meeting Rector A.I. Rudskoy noted, that the cooperation with the Peoples' Republic of China in the context of international activity of the Polytechnic University is the highest priority. "In comparison with our international partners, China has the top lead. A lot of representatives of the Chinese business, scientific and education institutions, government authorities are already familiar to the Polytechnic University and consider it as the partner for cooperation in scientific, technical and educational fields. Our university has visiting professors from the PRC working here. We have five thousand foreign students and almost one third of them are students from China." - the Rector explained. 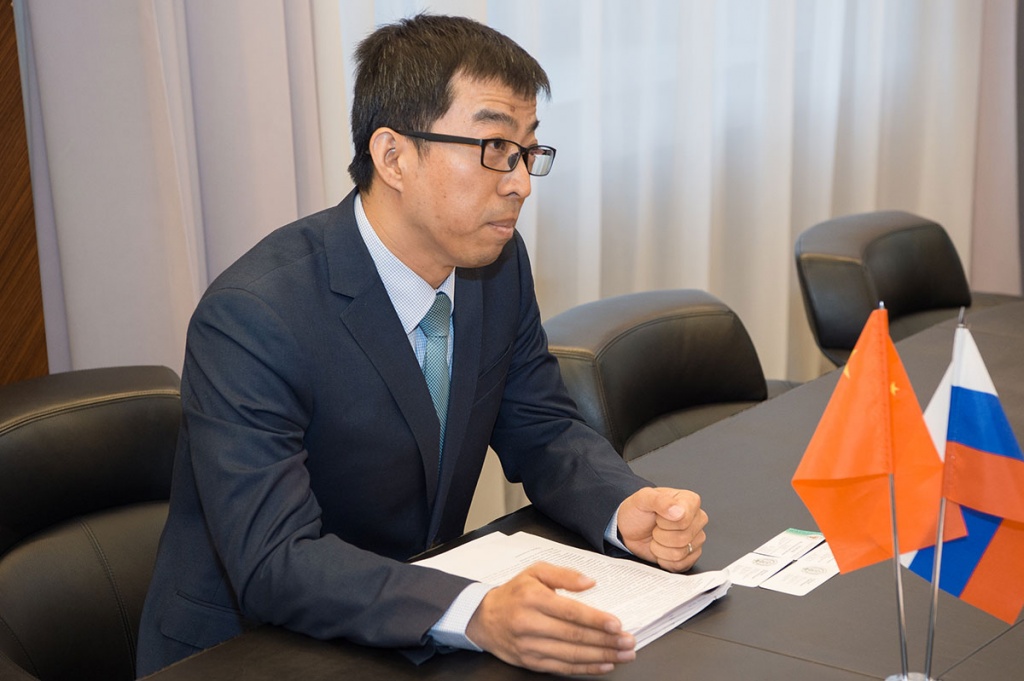 Elaborating on the issues of Chinese students, SPbPU's Vice-Rector for International Relations D.G. Arseniev noted that in recent years the quality of students from China has been growing in line with their number. "They are motivated to gain knowledge, they understand clearly what they want to learn here, and they are aware of their career prospects. I think this is also applicable to Russian students going to China." D.G.Arseniev explained.

Moving on to the discussion of SPbPU's office in Shanghai Rector Rudskoy noted that this is the first experience of this kind. "When you find yourselves in the environment of Hi-Tech companies, being able to understand the situation from the inside, we simultaneously solve a number of tasks: improve competitiveness and reputation of Peter the Great St. Petersburg Polytechnic University as an innovative, entrepreneurial and international higher education institution, and what is of even greater importance to us - we establish relationships with our foreign partners - both with leading scientific organizations and industrial companies," - explained the Rector. 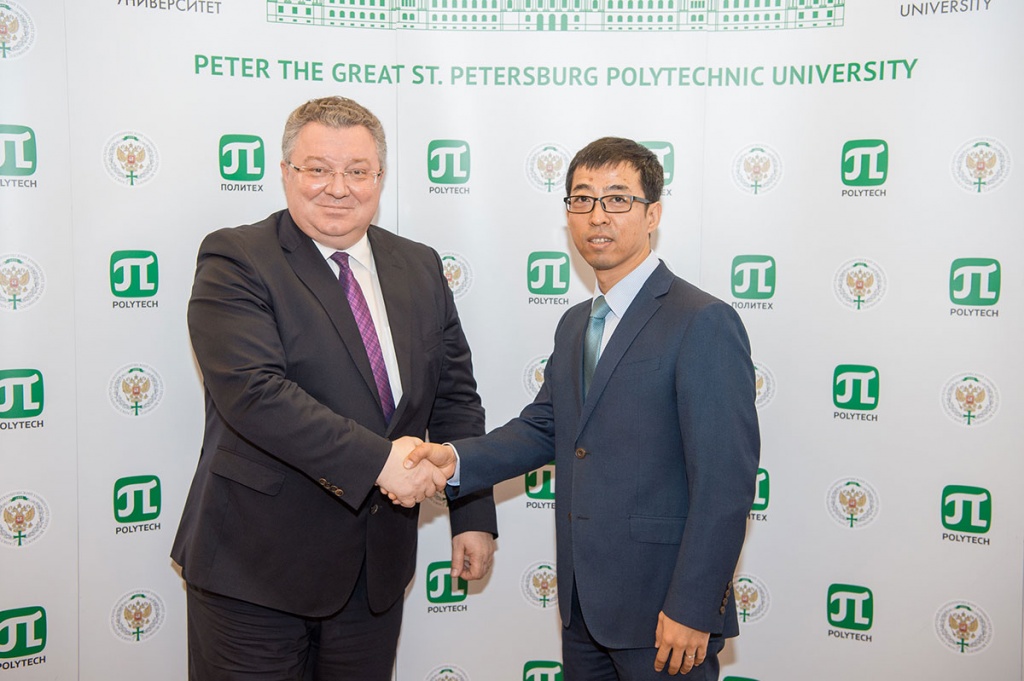 In addition, SPbPU's office in Shanghai will play a very important humanitarian role, aiding in rapprochement of our cultures. "Communication between young people - informal, friendly - is very important!" - noted Rector Rudskoy. In his view, it offers new prospects for youth tourist exchange between our countries. Andrei Ivanovich highlighted a few directions of the youth tourism cultural informative, educational, scientific, event. Here particularly important is the long experience of teaching Russian as a foreign language, highly professional staff, the campus of the university, which is unique for Saint Petersburg and even Russia, with a well-developed infrastructure and comfortable environment for living, studying, research.

Consul for Science and Technology of the General Consulate of the PRC in St. Petersburg, Mr. Miao Yuan noted that the Polytechnic University is starting to play an increasing role in the expansion of scientific technological and educational cooperation between Russia and the People's Republic of China. "I've heard a lot about your University and I know that it provides training for scientific research work, develops advance technologies. Your university also showed very good results in the international universities' rankings, and taking the opportunity, I would like to congratulate you on this event", - Mr. Miao Yuan noted.

According to the Consul, today science and technology cooperation between China and Russia corresponds to the interests of the strategic partnership between our countries. "There are a lot of joint projects,- says Mr. Miao Yuan,- and the relationships established between the scientists of our countries earlier allow us to reach a new level of cooperation. New promising projects, especially in the area of Hi-Tech, microelectronics, engineering and ecology are currently emerging. Many of these projects receive support from the governments of the both countries." In the view of the Consul, another important thing is that the communication between young scientists of our countries is developing rapidly. They take part in joint researches, an increasing number of Chinese students are going to Russia and, in their turn, more Russian students are going to China.

Mr. Miao Yuan commented on the opening of SPbPU's office in Shanghai: "As a Consul for Science and Technology, I surely encourage this initiative and assume, that this is a wise and a promising decision. I hope, that SPbPU's office in Shanghai will become an important ground for the expansion of science and technology cooperation between our countries". In conclusion he again stated that the cooperation between Russia and China is a long-term development priority not influenced by the current geopolitical situation in the world.