Collaboration between SPbPU and Chinese Universities Is Getting Stronger

It is impossible to envisage a university without intensive international collaboration and integration in the global research and education space. The year 2016 has been very fruitful for Peter the Great St. Petersburg Polytechnic University in terms of international collaboration growth. Herein one of the top development priorities in the Polytechnic University’s is to expand interaction with the partners from Asia-Pacific region, in particular, from the People’s Republic of China. 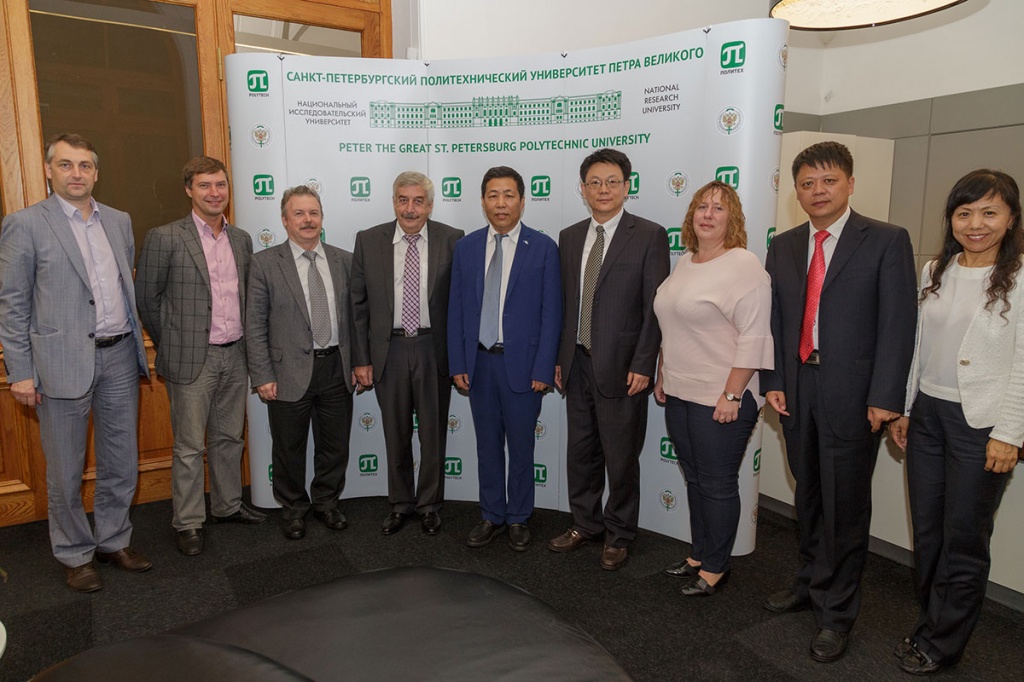 The Polytechnic University actively interacts with universities, research, innovation, industrial, business, government and non-profit making organizations in China. In April 2016 in Shanghai, in the new hi-tech district of Pudong, SPbPU opened its official representative branch in China  – the first branch of the Russian university in China.

On August 19, a delegation from Liaoning Technical University, China (hereinafter LTU) came with an official working visit to St.Petersburg. The delegation included Xing BAO JUN, secretary of the university CPC organization, Xu Ping, head of LTU international department and Van HUYMIN, director of the geology institute. The Chinese colleagues expressed their interest in learning about the activities of SPbPU – the purpose of their visit was to discuss the possibility for developing bilateral collaboration in the sphere of education and research. 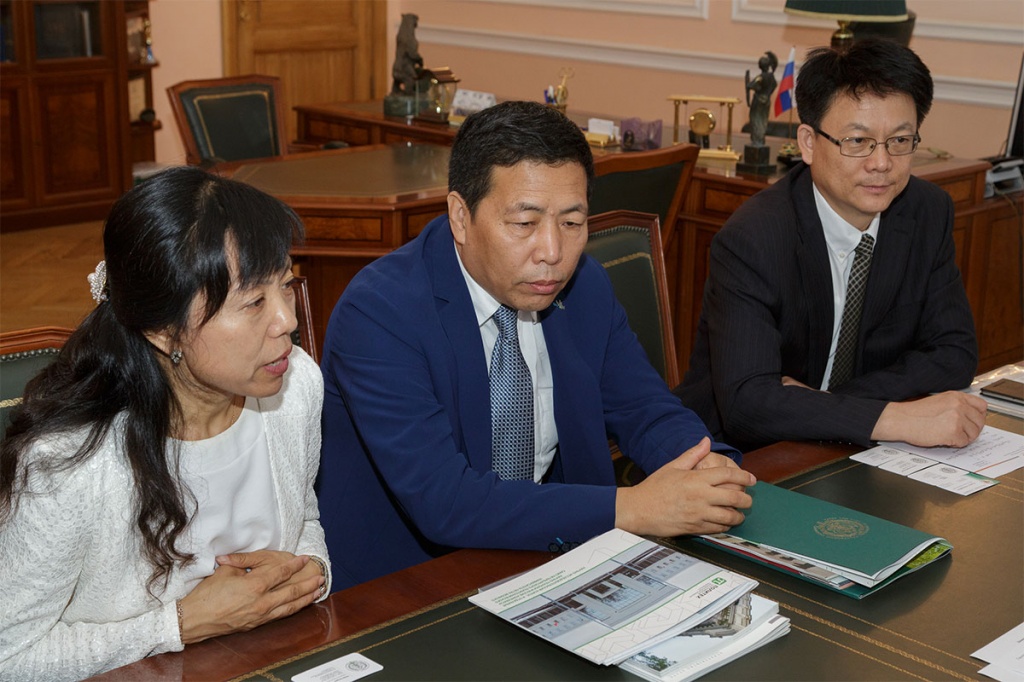 In this meeting SPbPU was represented by V.V. GLUKHOV, first vice-rector, V.V. SERGEEV, first vice-rector deputy for academic affairs, V.D. KHIZHNYAK, head of the International Cooperation Department, E.V. SATALKINA, head of the International Education Department. The meeting was also attended by E.V. SEMENOV, deputy director for government relations of the company of Geoscan.

The meeting was started by the first vice-rector of SPbPU, who made a brief presentation of the university and gave a full account of cooperation between the Polytechnic University and universities of China to the Chinese guests. “We began interacting in the 1950s, when a large group of our representatives was sent to the People’s Republic of China to assist in reconstructing the economy, industry and higher education system of China. Tsinghua University became our first partner,” explained V.V. GLUKHOV. According to the vice-rector, today SPbPU cooperates with 37 Chinese universities and the relationships with every of them have been fostered for decades, given the specifics and main trends in their academic and research activities. Apart from Tsinghua University (25th position according to Quacquarelli Symonds), the key partners of SPbPU in China are Zhejiang University (Hangzhou, QS – 110), the Harbin Institute of Technology (QS – 291), Jiangsu Normal University (in 2016 jointly with SPbPU the university established the Russian Language Center and “Joint Engineering Institute of SPbPU and Jiangsu Normal University), Hong Kong Polytechnic University (QS – 116) and Xi'an Jiaotong University (QS 331). V.V. Glukhov pointed out the achievements of the Polytechnic University’s employees and teachers, in particular, the international departments of the university, which have been working for many years to establish these contacts and connections. V.D. KHIZHNYAK, head of the International Cooperation Department, in his turn, said: “It’s really important to us to maintain the relations with all our Chinese partners.”

SPbPU cooperates with the universities of the PRC in such areas as: programs of learning the Russian language and culture, joint scientific research, organization and holding of international conferences, seminars, summer schools, academic exchange programs for students and teachers, professional internships, participation of students and teachers in joint grant programs. V.V. Glukhov emphasized that there are specific projects in all the mentioned areas of cooperation with the Chinese universities which have already been or are being implemented now.

As for the prospects of cooperation with Liaoning Technical University, the first vice-rector of SPbPU reminded that “Russia has mechanisms, which help Russian and Chinese universities to interact”, meaning, in particular, grants of the Russian Foundation for Basic Research and funds of the BRICS Foundation. Moreover, given the positive experience of the Polytechnic University in promoting the Russian language in the PRC, V.V. Glukhov finds it important to keep on setting up Russian language centers based on Chinese universities to prepare Chinese students for studying in Russia. “We need a language to communicate, understand each other and collaborate effectively with the Chinese scientific community,” summed up V.V. Glukhov.

The secretary of the CPC organization of Liaoning Technical University, Xing BAO JUN noted that today there are great possibilities for cooperation between Russia and China in terms of academic and scientific cooperation. “We’re actively building up contacts with colleagues from Russian universities. We have leant that your university is internationally recognized and it is really important for us to establish relationships between our institutions. I’m sure that today we can start from scratch and move forward step by step,” concluded Xing BAO JUN. 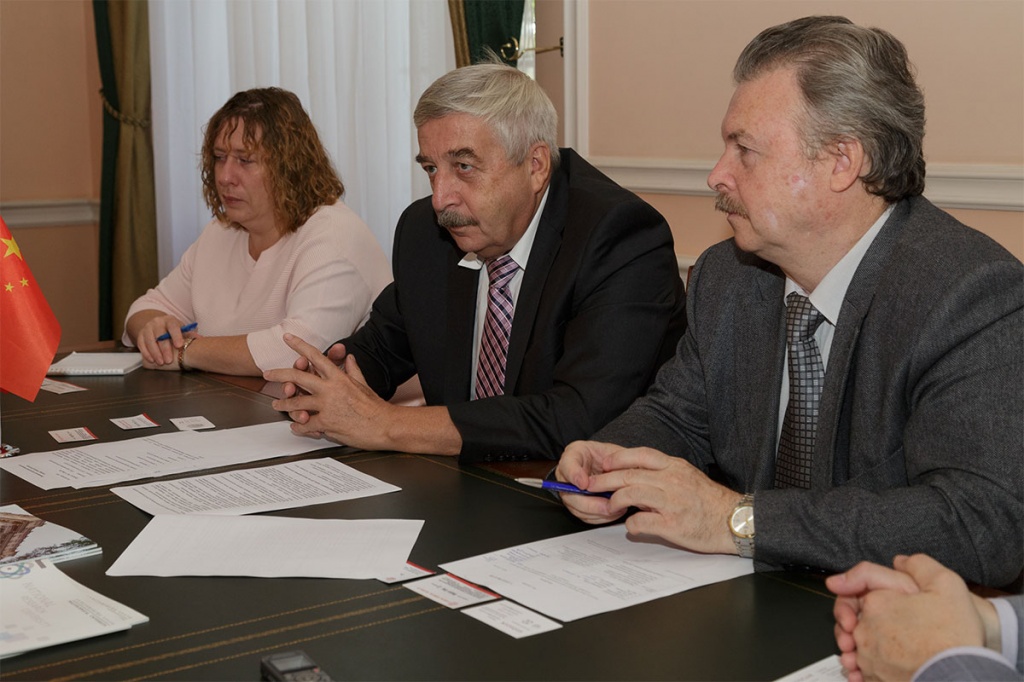 E.V. SEMENOV, deputy director for government relations of the company of Geoscan, who attended the meeting, noted that the company cooperates both with the Polytechnic University (in particular, it performs calculations in the Supercomputer Center of SPbPU) and Chinese companies. “Since the Polytechnic University aims at collaborating with companies involved in advanced R&D and having foreign partners through which the results of research activities of the university’s employees can be commercialized and jointly brought to overseas markets, we can be useful for each other,” E.V. SEMENOV expressed his firm opinion. It should be noted that Geoscan group has been working in the market of pilotless aviation for more than 8 years. Over this time it has worked out unique software and a line of pilotless flying vehicles. Such pilotless complexes allow creating precise detailed orthophotomaps and terrain relief, which has been a breakthrough in the sphere of survey, geodesic and map-making work. The chairman of Geoscan group’s board, A.E. Semenov is a participant of Aironet group, one of the working groups of the National Technology Initiative (NTI). On June 21, 2016 A.E. Semenov took part in the meeting of the expert council of the Agency for Strategic Initiatives (ASI), whose Supervisory Council is chaired by the RF President, V.V. PUTIN. The project of Geoscan group, together with the “Factories of the Future” project, presented by A.I. BOROVKOV, vice-rector for advanced projects of SPbPU has been approved and is going to be supported by the ASI.

Given the great interest of both parties in cooperation and the wide range of similar scientific schools, the representatives of Peter the Great St. Petersburg Polytechnic University and Liaoning Technical University agreed to consider the possibility to come into a cooperation agreement. The first vice-rector of SPbPU propounded to review the major areas of the bilateral cooperation in education, science, innovation and hi-tech, which would make it possible to understand clearly the current situation and define specific areas for interaction.