Peter the Great Saint-Petersburg Polytechnic University became a platform for communicating, knowledge exchanging, and valuable experience sharing for IT-specialists. All the week long the IIEP resource centre accommodated a conference in which participated the Polytechnic University staff, representatives of Elsevier (one of the four largest publishing houses in the world that publishes about a quarter of all papers in scientific journals throughout the world) and EPAM Systems (a leader in several key segments of the global software market). Yuri Gankin, EPAM Systems’ Vice-President for Natural Sciences told us about the history of the company, its most interesting projects, prospects of the software market, and areas of cooperation with the Polytechnic University, 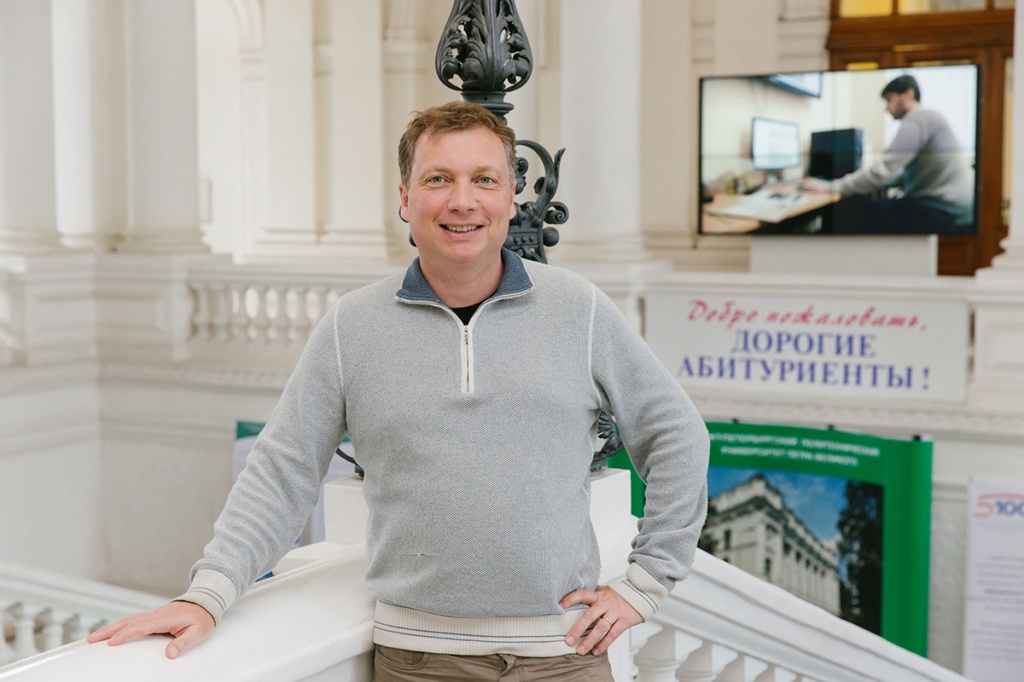 - Yuri, you graduated from St. Petersburg University of Chemical Technology, major of physical chemistry. How did you end up developing software, and why did you choose EPAM?

- In parallel with EPAM there was a small company - ITC-GGA, which we established together our partners. We developed software in the field of natural sciences. We also developed information systems, algorithms and computer applications in the field of toxicology, pharmacology and material science. One year ago, EPAM acquired our company. Along with that, there appeared such customers as Elsevier, AstraZeneca, Biogen, Novartis and others. Solutions for biopharmaceutical industry became a new vertical of development for EPAM Systems.

- Tell us about EPAM Systems.

- It was founded in 1993 and is based in the United States. Today, the company is recognized as a leader in software engineering by a number of independent analytical agencies. The staff includes more than 15 000 experts, carrying out projects in more than 30 countries. The company is listed at New-York stock exchange and is worth more than 3.5 billion dollars. In 2013 EPAM ranked sixth in the Forbes list of “25 fastest-growing technology companies in America”. According to the publishing house “Kommersant”, EPAM heads the list of the largest software developers in Russia. The company’s main lines of business include development, testing, maintenance and support of custom software and business applications; integration of applications based on products of SAP, Oracle, IBM, Microsoft; setting up dedicated development centers (centers of excellence), testing centers, software quality control, and also IT consulting given the industry specifics.

- Customers of EPAM are mainly companies of the first echelon of the global economy.

- EPAM works with customers around the world. The company develops software for Google, Microsoft, and SAP. We provide IT-services for Bosch Group, the international news agency Thomson Reuters, publishing house Wolters Kluwer, and hundreds of other companies. The customers of EPAM in Russia are Gazprom, Sberbank, L'Etoile, etc.

- You said that the company has significantly deepened biopharmaceutical industry specialization. Which top priority requirements does this industry have now?

- I think these are issues related to personalized medicine. Today there are capabilities which make it possible to ensure an individual approach to patient treatment. It is especially important cancer treatment, because as it is known, cancer tumors have a different genetic portrait and react differently to the same drugs. Recently there have been some major breakthroughs in biology and chemistry in reference to medical technologies that allow acquiring a large amount of data about each patient. I am talking, in particular, about modern methods of genome-wide sequencing (human genome analysis). These techniques are rapidly developing and their costs are quickly declining. So, in the coming years, such tests will be affordable to a large number of patients. With the information on human genetics and detailed clinical data, as well as data about how various therapies affect different people, we can choose an individual therapy. Of course, it is not for everyone just yet, but, for example, for certain ethnic groups.

-What does hereditary material decoding bring?

- Oh, it provides truly fantastic capabilities for medicine - from "repair" of defective genes to a serious prolongation of youth and life! Reading DNA is a really difficult technical problem as it is. Earlier, only short pieces of DNA sequences were available for testing - individual genes and their fragments. Due to the complete sequencing of the genome it has become much easier to analyze the DNA "text". Over the last 10 years, scientists have really advanced in this area. New genes have been discovered. Their mutant forms lead to cancer, atherosclerosis, Alzheimer's disease, cardiovascular diseases.

But the most important thing that has happend in chemistry and biology over the last decade is that the amount of data that scientists need to deal with has increased by an order of magnitude. In the 1990s such techniques appeared as "combinatorial chemistry" and high throughput screening - high performance screening, a method of scientific experimentation, which allows producing millions of pharmacological tests quickly. The same technology of new generation DNA sequencing - labs provide with hundreds of gigabytes of data a day! Accordingly, the role of information technology has increased, because without complex mathematical processing and serious computing power, scientists cannot analyze huge amounts of the obtained data.

-Is it done on supercomputers?

- It can be done in different ways. There are applications that work on conventional machines. Many of them work on computer clusters. HPC is developing very fast, which is high performance computing. And I know that the Polytechnic University is building a powerful computer center, which will include both clusters, and special video processing systems. It will have the Polytechnic University’s own powerful “cloud”. Today, modern chemistry and biology are impossible without serious mathematics and computing machines. The use of information technology can give a new momentum to the development of biomedical sciences in different directions. 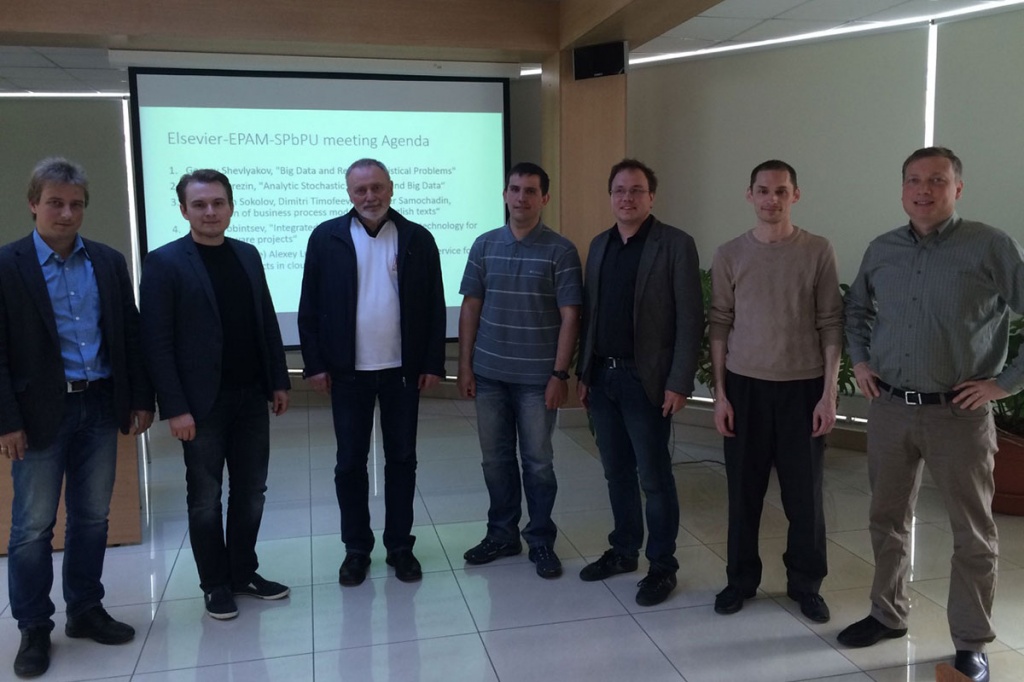 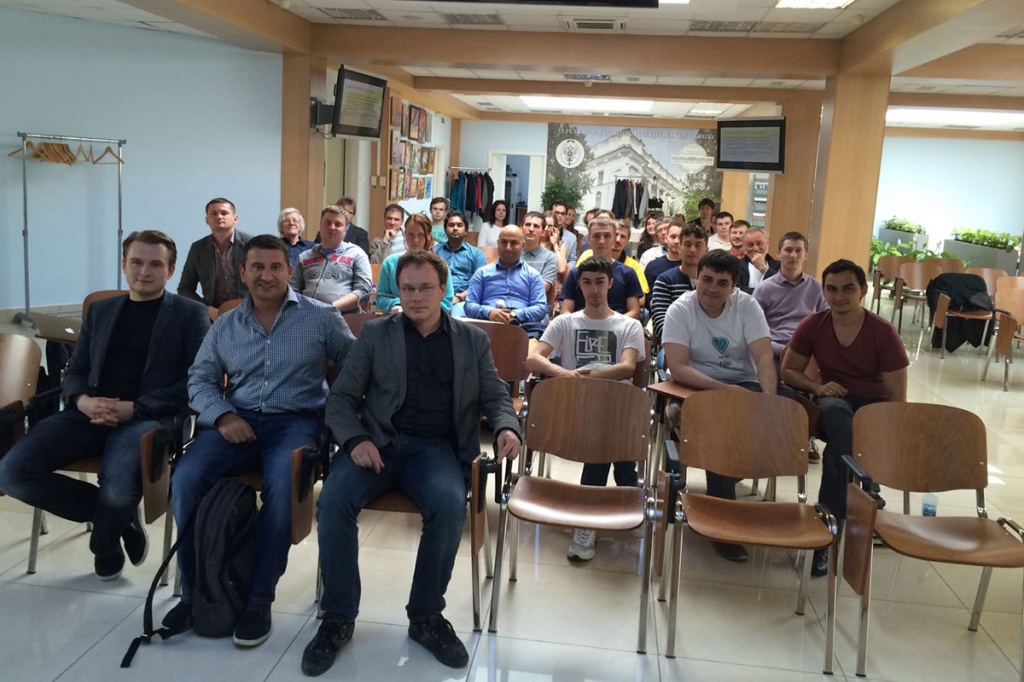 - What unites your company and Polytechnic University?

- We have been cooperating with the Рolytechnic University for a long time, in particular, with the Laboratory of Applied Mathematics. I can say that there is no other university in Russia and St. Petersburg, which would give us more people. About 30% of our employees are graduates of your university. Some of our employees teach at the Рolytechnic University. At our conference, we heard the presentations of your professors such as Drobintsev, Berezin, Shevlyakov, Sokolov, Lukashin - in a variety of areas: applied mathematics, software development, automation, computer science, big data, natural language processing. We were impressed by the level of the presentations and discussions, as well as how wonderfully - absolutely at the world-class level– the rooms are equipped. Therefore, we are very interested in our further and deeper cooperation.

- In what areas could this cooperation develop? Do you have some specific ideas?

- EPAM Systems actively cooperates with universities, opening joint laboratories and branches of departments, creating new training courses and modifying the existing educational programs. I am sure that scientific-practical conferences and discussion clubs, joint publications, R&D and an opportunity to participate in complex innovative projects, can be interesting, too. We would like to establish a joint laboratory of innovative technologies in collaboration with the Polytechnic University. I has been told that the University has experience in setting up such laboratories, for example, with Philips, as well as experience in involving other foreign universities to cooperate in specific research projects. If we are able to create the laboratory in the Polytechnic University with 3-4 our partners, including several European universities, our capabilities, including financial ones, will be much wider.

I would also like to note that the level of training of the Polytechnic students is very high, which means that the company will be able to employ great staff graduating from here. Hiring young professionals is one of the key policies of EPAM. We cooperate with the largest educational institutions in Russia, Belarus, Ukraine and Kazakhstan. EPAM always has vacancies for talented developers of Java / JEE, .NET, C ++, testers, technical support specialists, system and business analysts. EPAM is recognized as the best employer for young professionals in Russia, according to HeadHunter Group. EPAM is going to grow seriously in St. Petersburg in the near future, through acquiring new companies and recruiting new people. St. Petersburg office used to have fewer than 200 people. But today the city is becoming an important center, which will focus mainly on servicing European and American customers. We plan to employ one thousand five hundred people altogether. In this situation, the idea of multifaceted and mutually beneficial cooperation with the Polytechnic University looks absolutely logical.