The administration of Sungkyunkwan University (SKKU) is interested in developing partnership with Peter the Great St. Petersburg Polytechnic University. The President of the Korean university Dr. Kyu Sang Chung offered cooperation in the meeting with the Rector of SPbPU A.I. Rudskoy.

The uppermost subject of the meeting, which took place today, on January 27, was broadening of cooperation between the universities in academic and research areas. The following people took part in the negotiations: Vice-Rector for International Affairs, D.G. Arseniev; Vice-Rector, Press-Secretary D.I. Kuznetsov; Head of Rector’s Administration V.P. Zhivulin; Head of International Cooperation Office V.D. Khizhnyak. Vice-President for International Cooperation Dr. Suke Kyu Lee and Professor of the History Department Dr. Kyong Sok Lim were the Korean colleagues, who participated in discussing prospects of cooperation – they presented strategic lines of development and scientific results of their departments, shared their vision with regard to areas of interaction with SPbPU. The negotiations were also attended by the Dean of the Information and Communication Technology College Dr. Byeung Woo Jeon and Director of the International Office Mr. Byung Joo Park. 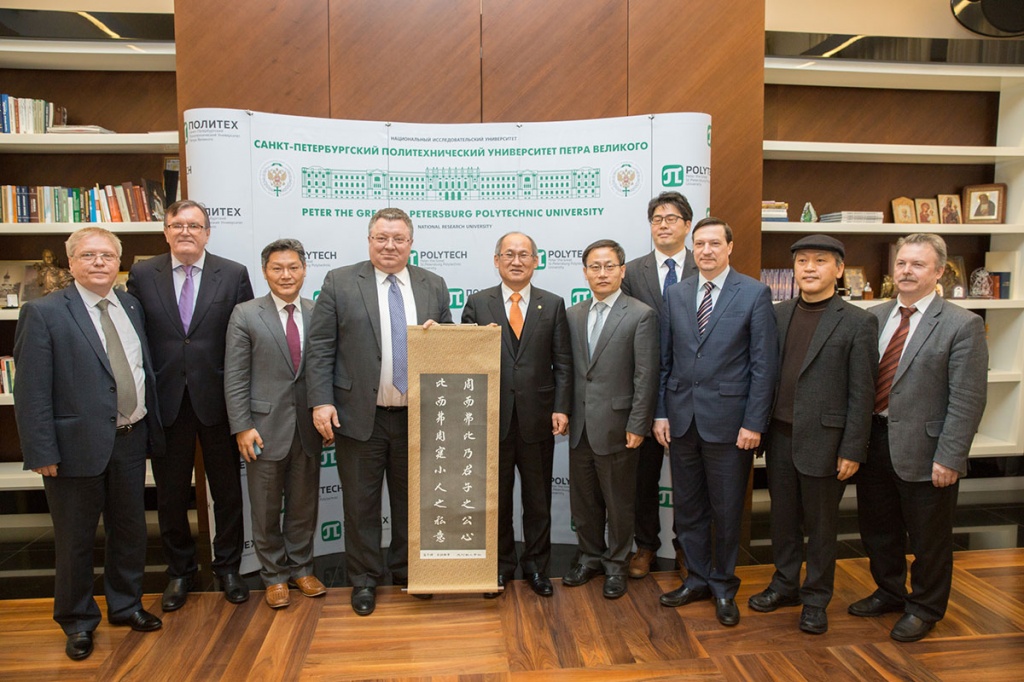 Greeting the foreign colleagues, Rector A.I. Rudskoy noted that broadening scientific and educational interaction with universities of the Pacific Rim and, in particular, Republic of Korea is one of the priority lines of activity of the Polytechnic University. Today there are about ten contracts with the largest Korean universities, including Pohang University of Science and Technology, Yonsei University, etc. Academic mobility programs are being implemented and there is partnership in different fields. The university also cooperates with the largest Korean industrial companies, including LG Electronics, Hyundai, Samsung, etc. For example, SPbPU under support of Korea University of Materials Science (KIMS) is the basis for Russian-Korean Research Center of New Materials (Director of the Center – Prof. O.V. Tolochko). Some contracts have been implemented about joint research in the field of magnet iron-based nanoparticle synthesis, magnet polymer composite materials synthesis, magnet nano-powder based liquids. In 2004 jointly with LG Electronics, research and educational center “LG Polytechnic” was set up.

In the opinion of Rector Rudskoy, such close integration and interaction with Korean academic and industrial partners open up big prospects for research and further development commercialization jointly with SKKU, too. “Having learned about your university – academic achievements, ranking results and given that a large share of your scientific research and educational programs coincide with what we have got, we will be honored to establish close academic and scientific interaction with you,” – summed up the Rector. 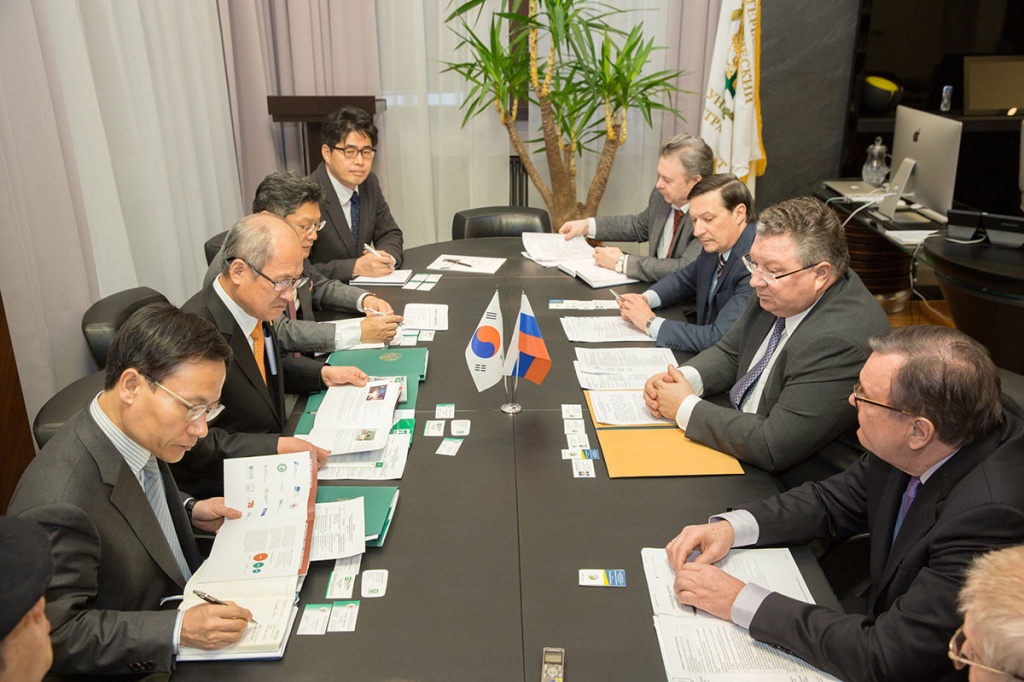 In the opinion of Mr. Rudskoy, the given the fact that SKKU has the Russian Language Department and the Polytechnic University has rich, almost one hundred year old experience in teaching Russian as a second language, academic and cultural cooperation between our countries will grow. 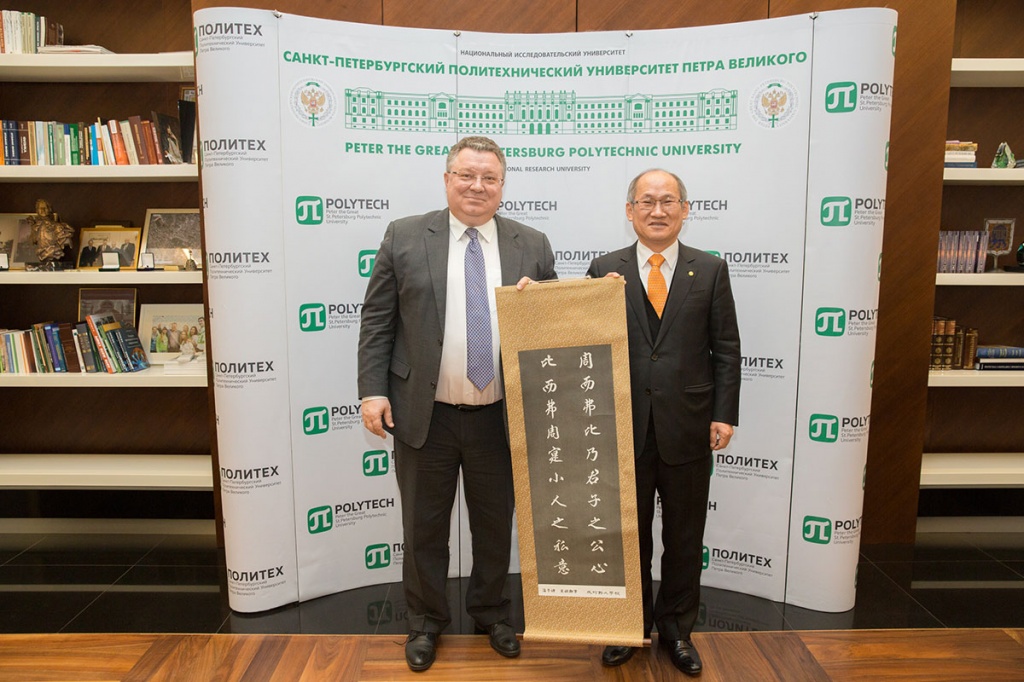 In conclusion SPbPU Rector stated a number of suggestions about the lines of joint activity. These initiatives were, first of all, about joint research and scientific publications in international highly-ranked editions (in such priority fields for both universities as: system engineering, mechanical engineering, computer sciences, civil engineering, electrical engineering in large systems and mechanisms, robotic engineering, material analysis, biomedical technologies, green technologies, entrepreneurship and international business) and about more active academic exchanges. Thus, the Rector invited students and teachers from SKKU to participate in grant and scholarship programs, organized by the Russian government and in Summer schools of the Polytechnic University. Having reminded, that there are 22 Master’s programs in English in our university in many specialties of technology and economics, the Rector offered to provide scholarships to the best students of SKKU for participation in our international Master’s programs.

The Korean colleagues pointed out that today, in the era of globalization their university pays a lot of attention to network interaction of universities. “Our strategy is to have many partners, not only with American universities, which are in majority today, but with universities all over the world,” explained Vice-President for International Cooperation Dr. Suke Kyu Lee. The format of network interaction, in his opinion, allows the universities to enter a new level of cooperation and make partnership more substantive, achieve concrete results.

Assessing the prospects of cooperation the President of SKKU Dr. Kyu Sang Chung noted that the Polytechnic University has all the facilities for it. “We know that the Polytechnic University has rather high positions in the international rankings and it is also important for us. However, the most important thing is real achievements and real projects. And your university clearly demonstrates it, - said Dr. Kyu Sang Chung. – I fully support all your proposals about our cooperation and I am sure it has a strong potential.”

At the end of the meeting the colleagues exchanged mementos and the President Dr. Kyu Sang Chung invited A.I. Rudskoy to visit SKKU in return. The visit program of the Korean colleagues included a guided tour around SPbPU with the visit to the research and educational center LG Polytechnic, Scientific-Research Building and Supercomputer Center, Institute of Advanced Industrial Technologies, Laboratory of Molecular Neurodegeneration, etc.

Founded in 1398, Sungkyunkwan University (SKKU) is the oldest university in Korea. Thanks to the support given for many years by the world-known company “Samsung” SKKU is a leader in the higher education reform. Moreover, thanks to the government support, the university holds the first place among private universities of Korea in the program of higher education support. The total number of students in the university is 36,000 people, of teaching staff – 1,200 people, foreign students – 1,500 people. As part of Vision 2010+ project, the university strives to be one of 100 best universities in the world, as a global university which successfully combines traditions and advanced technologies.