Rome is taken over: Polytech cheerleading team – winner of the international championship

Loud music, the atmosphere of rivalry, instructions of coaches in various languages, a full range of emotions from anxiety to triumph– all this could be observed at the XV International Championship EUROROMA-2015, which was held in Rome (Italy) from 12 to 15 November. From the stands of the multi-thousand-seat stadium you could hear cheers of the fans «Polytech is the best! ». It was the way how the guys supported our cheerleading team, which presented Russia in that competition. Finally, we won in the “ Dancecontest “ nomination. 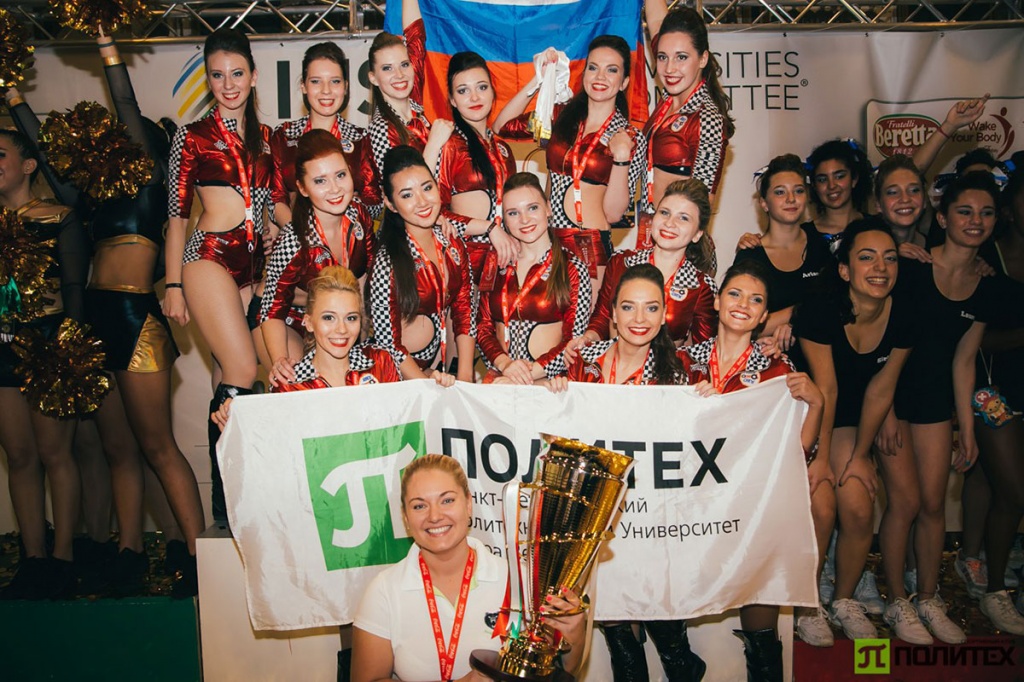 More than three thousand students from all over the world took part in the championship, bringing together different nationalities and sports. The boys competed in the events such as football, handball, basketball, volleyball, rugby, table tennis, athletics and cheerleading.

"The event was really huge. We were impressed by the organization: it was at the highest level, which allowed us to integrate in the training process without any problems. The first days girls spent training and preparing for the upcoming tournament," said the team coach D. A. Prokofieva. 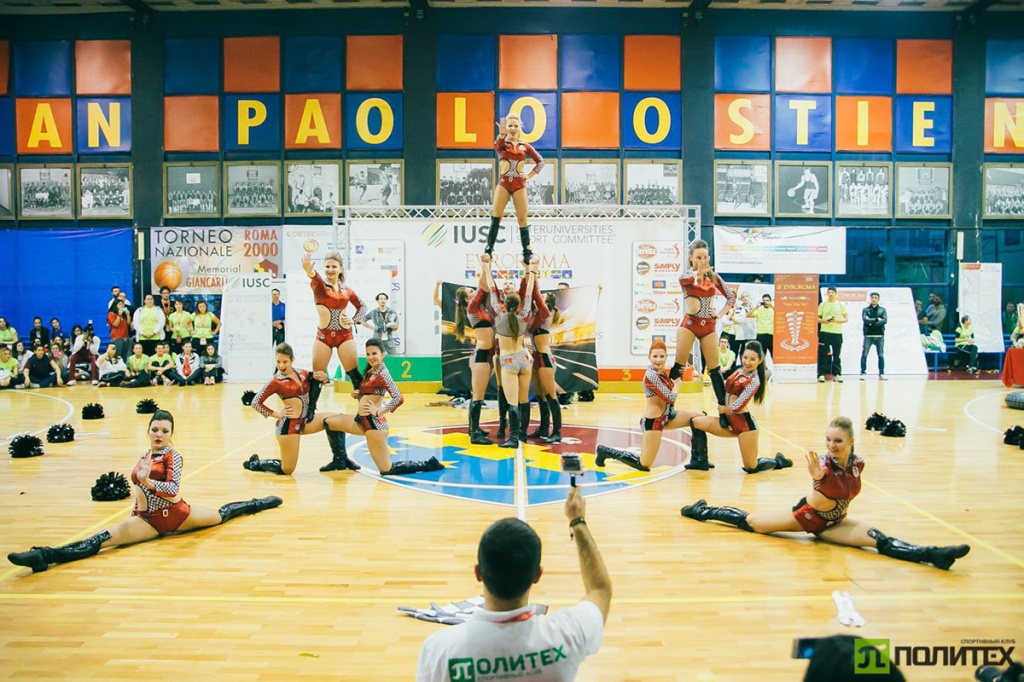 The morning of the competition day we spent doing girls’ stuff: hair, makeup, costume – everything has to be perfect! It is obvious, that I was a little bit nervous, because these competitions were very important, – says the team captain, the 2nd-year student of ICST, Victoria Kraytor .- But despite the emotions, we collected thoughts and strength before the entrance upon the stage.

The Polytech team was visible from afar because of its combative mood, bright reddish colored uniform and black pompons. Among the competitors were teams from Italy, Bulgaria, Spain and France, but Russia was represented by a single team –the team of the Polytechnic University. After the coach's words of encouragement, the girls set themselves up for the victory and walked out on the stage, waiting for their performance. 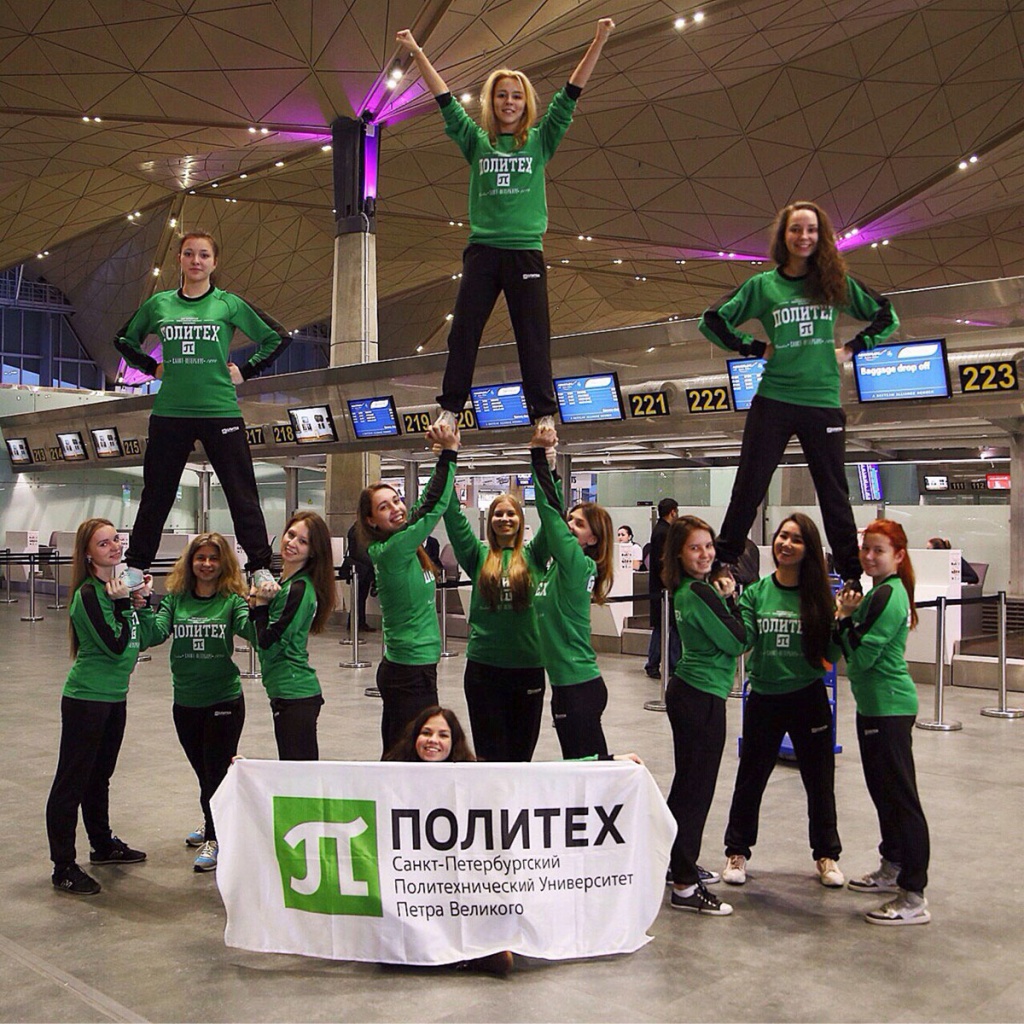 Settled by drawing lots, SPbPU was the last team to perform, and it gave the opportunity to watch the performances of all the teams. Despite the competitiveness, girls were applauding other teams, because everybody understood how difficult and exciting it was to perform on stage. The jury estimated each performance by different criteria: gymnastics and athletics, choreography and ability to dance, music and audience reaction. The musical selection of our girls was done well; from the first second they inspired the audience. Even foreign teams began to support polytechnics.

"Despite nerves, everything was perfect: pyramids and dance elements were performed at the top level. After the performance not only competitors, but the organizers paid the girls compliments to their program, which, of course, was very pleasant," said the team coach D. A. Prokofieva.

Later came the exciting moment of waiting on results, because the rivalry was very serious. Hand in hand, the Polytech team listened to the announcement of prizes and hoped for the victory. When the girls heard that they had won, they were brimming over with emotions! And here are our girls on the medal podium, being awarded the gold medals and the cup. The Polytech national team defended the honor of the country.

We congratulate the Polytech cheerleading team and wish them to achieve new heights in the sport.