The Academic Council congratulated the best graduates of Polytechnic University 2021

Gold medalists who received only excellent grades were awarded commemorative plaques from the SPbPU Endowment Fund and gift sets. 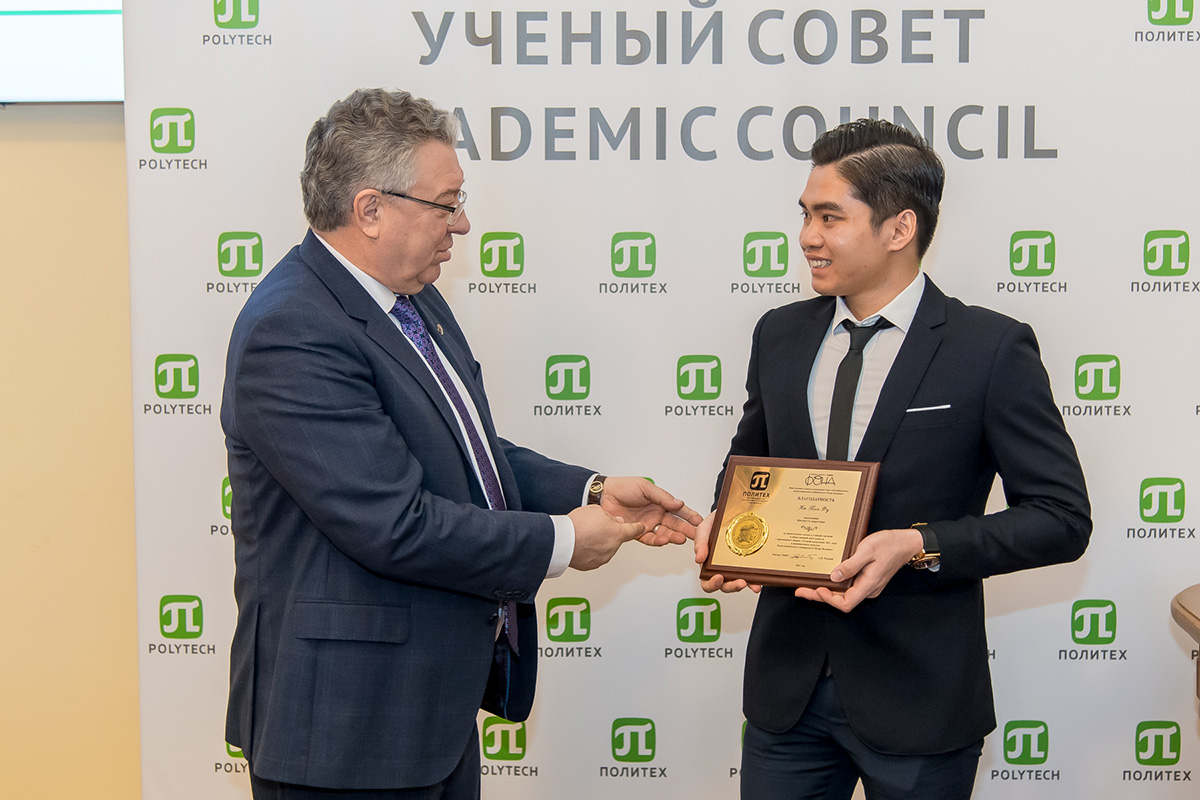 Polytechnic University honors its best graduates not only in July but also in February. The fact is that some specialities at the university are studied for five and a half years, so the defense of final qualification works falls not in June, but in January.

Usually, awards to the gold medalists of the specialty - those who have studied all 5.5 years with only best scores, are presented at the Student Ball on February 19, the birthday of Polytechnic University. But this year, because of the pandemic, the ball did not take place, so graduates of the Institute of Energy NGO Tan Phu and Maxim Nosov received congratulations at a meeting of the Academic Council.

“Now to graduate school?” asked Rector of SPbPU Andrei RUDSKOI, shaking the hand of the Vietnamese student. “You should definitely get in, such talents are not to be squandered.”

According to the Rector of Polytechnic University, the current golden graduates, as well as their predecessors in previous years, have now become part of the glorious history of the university. Let’s get to know them better. 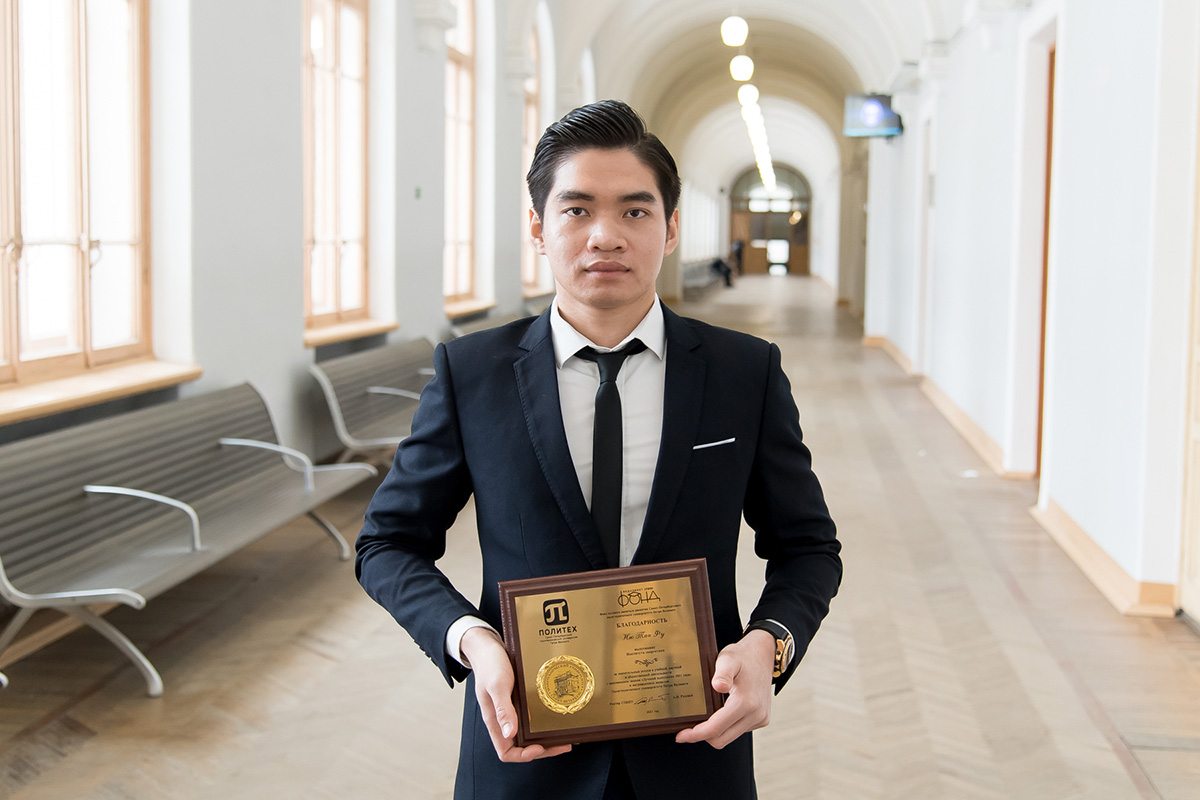 The graduate of the Graduate School of Nuclear and Thermal Power Engineering with a degree in Nuclear Power Plants Design, Operation and Engineering under the Educational Program ‘Design and Operation of Nuclear Power Plants’,” 1st Class Honors Student NGO Tan Phu was born into a peasant family in Long An Province on the border with Ho Chi Minh City. “As a child, I dreamed of becoming a doctor because I always thought it was one of the noblest professions, and on the other hand, doctors earn a lot of money,” he recalled. “I wanted to help my parents, at the time my family was very poor. Mom sometimes couldn’t even afford to buy rice.”

In high school, Tan Phu developed a passion for physics. His literature teacher NSUEN Thi Quynh Giao helped him get into a Russian university. One day she read in a magazine that there was a scholarship to study in Russia as a physics engineer, and told her student about it. And Tang Phu began to prepare to get that scholarship. “At school, I admired the heroic history of the Soviet Union. So the dream of going to study in Russia had long been in my heart. And I wanted to experience life away from home, so I intentionally didn’t choose cities near Vietnam.”

St. Petersburg attracted the young man, as well as many others, by its beauty, and Polytechnic University by the fact that “it is one of the best universities in Russia and in the world. And now, after completing my studies, I think that choosing SPbPU was the right decision. Because the teachers here are always friendly, ready to help, and treat international students very well.”

Tan Phu remembered his first day in Russia - October 28, 2014. First, he studied Russian for a year at IMEP. “For me, Russian was a blank slate, I didn’t know a word. It was very difficult to study. I studied almost all day, in the first months I did not sleep until 2 or 3 in the morning. In class, I listened carefully and watched the pronunciation of the teachers. I read a lot to learn new words. Also, I often watched simple videos to improve my listening skills.”

For further study, Tan Phu chose the Graduate School of Nuclear and Thermal Energy because it had a specialty that was interesting to him – “nuclear power plants.” “I spent a lot of time reading books and materials. Of course, in class, I didn’t understand everything the teachers said. But I would take notes and ask the teachers at the end of class. And they were always happy to answer. I very much want to thank the headmaster Alexander KALYUTIK and the Senior Lecturer Maxim KONYUSHIN for helping me during my studies. Thank you for your energy and effort! Besides, I spent time rewriting lectures after classes, and for that, I want to thank Russian students, especially Anna POPOVA, Nina KOLOSOVA, Valeria SUBBOTINA, and Angelina FEOFANOVA. Thank you for helping us, international students, for lending us notes during our studies. I’m very glad that you spent these years together with us!”

In the dormitory, Tan Phu made many friends from Vietnam, Africa, and Albania. He still keeps in touch with Zak Bumaza, an Albanian who has already graduated and now works in Russia. “Zach knows French, Arabic, Russian, and now he is also learning English. He is very friendly and kind, never forgot to say good night,” smiles Tan Phu.

Our harsh climate was surprisingly easy for a guy from a southern country. “We, the younger generation, can adapt to any conditions,” he believes. - I even love the weather in St. Petersburg, it is like a ‘girl’ – rainy now, sunny then, now warm again, and then bitter cold. In the summer, during the period of white nights, I photographed the sky several times at 24:00, sent it to Vietnamese friends, and asked, ‘What time of the day did I take this picture?’ And everyone was wrong when answering!”

As we wrapped up our conversation, Tan Phu once again thanked everyone who helped him achieve his goal. “My father and mother were the first teachers in my life. They were able to come out of poverty. Their experience taught me diligence, patience, optimism, and overcoming all difficulties, and taught me to appreciate everything around me. And I also want to express my gratitude to the governments of Vietnam and Russia, teachers, friends, and all my classmates! Without you, there would not be my success today.”

For now, Tan Phu remains in St. Petersburg for the time being. “The border is still closed, we are waiting for the departure flights to be reunited with our families,”  he explained. “If all goes well, we will return to Vietnam in March 2021.”

By the way, NSU Tan Phu is the second student from Vietnam to win the gold medal for best graduate. The first was last year’s graduate NGUEN Tien Hoang.