Closer to the Stars: Yuri Lonchakov, Pilot-Cosmonaut, the Hero of Russia, Talked to the Students of the Polytechnic University

It turns out that not only those who grew up in the 1960-70s dreamt to become cosmonauts. Today’s young people demonstrate a keen interest in space exploration and they are willing to learn about it not only from fiction films. In any case, the number of students who had registered to meet cosmonaut Yuri Lonchakov testified to that fact.

The students of the Polytechnic University had prepared a film about the heroic career path of Yu.V. Lonchakov to be shown during the meeting. After watching the film the cosmonaut thanked the students and joked, “Today I have learnt a lot about myself”. 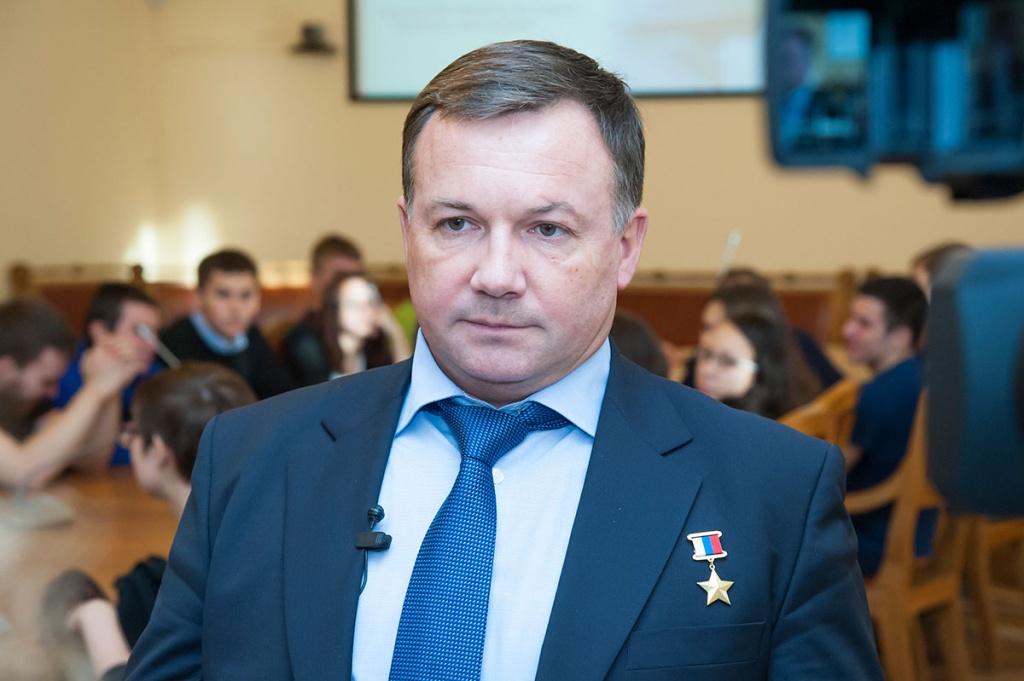 During the event Yu.V. Loncahkov made a presentation about GCTC. Hr gave a detailed description of the main areas of work, experiments and tests carried out at the Center. According to him, the Center possesses unique test facilities, namely flying laboratories, centrifuges, a hydro laboratory, a compression chamber, an isolation chamber, a thermal chamber, etc. For example, gravity load is modeled with the help of a centrifuge. Centrifuge TsF-18, which has no analogues in Russia, was developed in the Center and it operates successfully; it can create gravity load in the range of 1 to 30 g, with the gravity load vector oriented in any given direction, and with a wide range in which temperature, pressure, air humidity and gas composition can be adjusted inside the cabin. Not only cosmonauts and pilots take part in tests, but also engineers, instructors, doctors, programmers, mathematicians and many other specialists.

Yu.V. Loncahkov also told the students about the latest achievements in the sphere of manned cosmonautics. He spoke about his communication with foreign astronauts and cooperation with European countries whose astronauts went through the preparation procedures and went on space missions to the on-orbital station Mir. In addition, Yu.V. Loncahkov explained how potential cosmonauts are selected, how they prepare for their missions and live on the orbit, how they go through a rehabilitation process and he also gave some tips on how to become a cosmonaut. 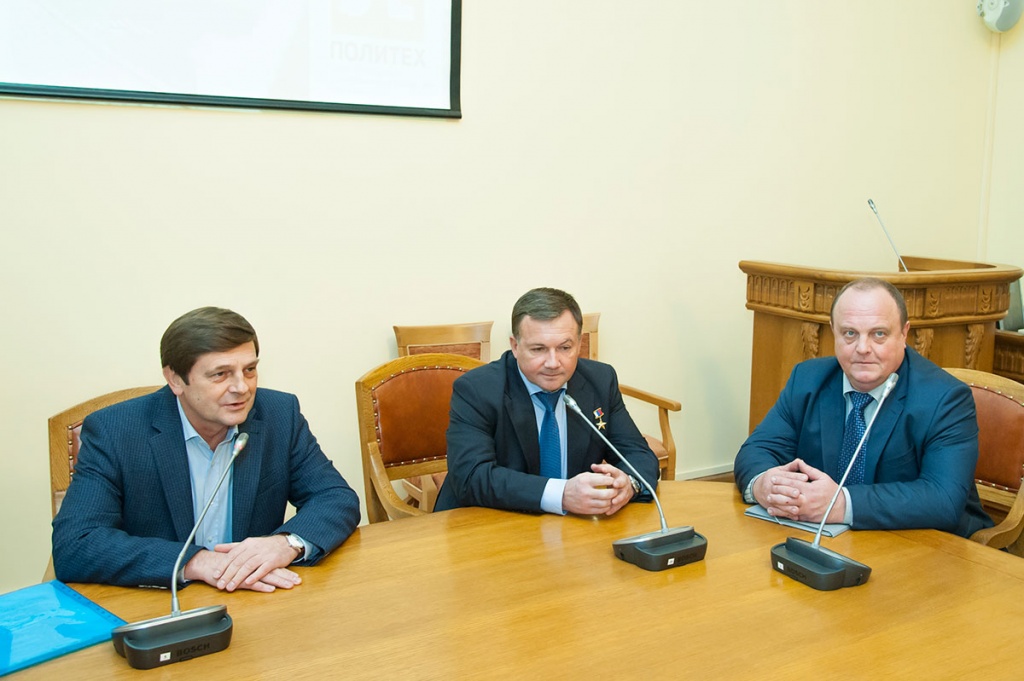 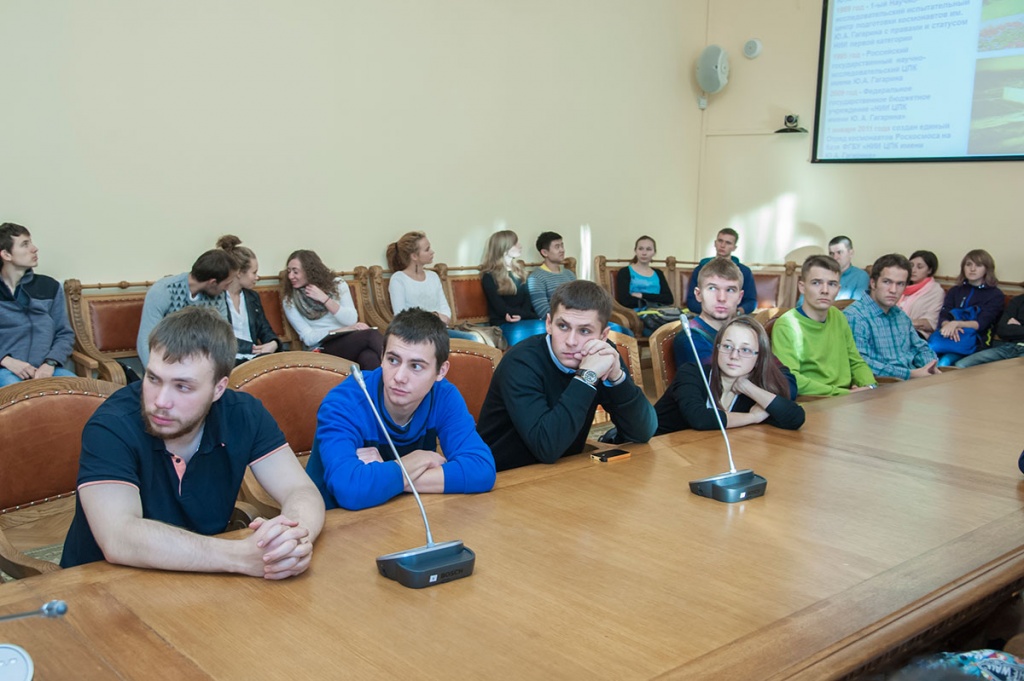 The students were interested in different things: whether Americans have really landed on the Moon, why it is difficult to explore this planet, which goals Russia currently has concerning space explorations and what exactly medical experiments in space mean. Yu.V. Loncahkov gave detailed answers to all those questions.

At the end of the meeting the Hero of Russia Yu.V. Loncahkov gave autographs to the students and signed the Distinguished Visitors' Book, “Dear friends! Thank you for you kind welcome in this outstanding university so rich in traditions! Let me wish you success, new achievements in your research and new discoveries. I hope to establish fruitful cooperation to the benefit of Russian cosmonautics”.

In his interview to the Media Center SPbPU Yu.V. Loncahkov spoke about the way he decided to become a cosmonaut and about his numerous hobbies and interests, as well as his feelings when he flew into space for the first time and scientific experiments in which he took part.

- Yuri Valentinovich, how did you realize that you wanted to become a cosmonaut and have you ever regretted it?

- I’ll begin with your second question. I’ve never regretted this decision because it was my real dream. I have always been interested in astronomy and aviation and I had a clear vision of how I was going to make my dream come true. I knew that at first I would become a military pilot and only then a cosmonaut.

- Georgy Grechko said in one of his interviews that when he first went into open space he had a feeling that he was standing on a lectern 350 kilometers high. Do you remember the moment when you first went into space?

- Of course, I was amazed to see all that breathtaking beauty. One could sacrifice a lot for the opportunity to see the Earth! On the one hand, when you see the Earth under your feet it’s a bit scary. On the other hand, going into open space is the top of a cosmonaut’s career. We have various areas of work but going into open space is a particularly difficult, risky and physically challenging job. But at the same time this job is especially rewarding.

- Another cosmonaut, Aleksey Leonov, is well-known not only as a cosmonaut, but also as an artist, the founding father of a new genre of science fiction painting. And what hobbies do you have?

- I’m keen on different things. Obviously, I like travelling. Photography. My parents are geologists, so I have been interested in archaeology since an early age; I am fond of collecting minerals and antiquities. And, certainly, I like diving and hunting. I also love music and playing the guitar. So my hobbies are various (Smiling).

- Scientists from the Polytechnic University have already contributed a lot to the development of space science and engineering and they are still doing so. For example, Vladimir Sergeevich Zaborovsky, Director of the Department of Telematics, is head of research for one of the latest space experiments, namely a session of ground robots guidance from the International Space Station, which is part of Contour 2 Experiment. Which experiments have you taken part in?

- You have just mentioned robotics, which is a promising area of work we are busy with now. I have taken part in numerous experiments because a cosmonaut’s job is versatile. These experiments are related to Earth’s remote sensing, astrophysics, growing single crystals, that is a wide range of research areas.

- Yuri Valentinovich, thank you for the interview. It is a great honor to talk to you..