Russianists of Polytechnic University: popularity of the Russian language in Vietnam is going up 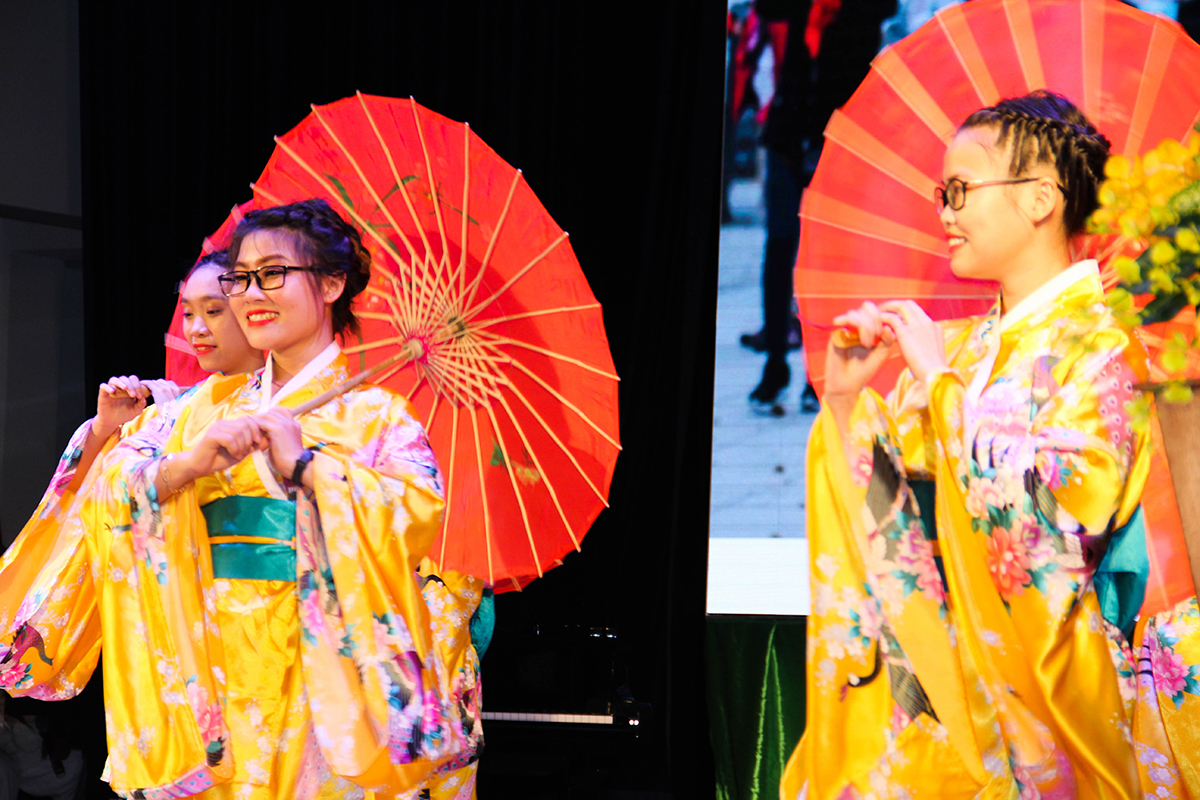 - Irina, how long did it take your team to get ready for the festival?

- In December 2017, Rector of Binh Duong University Mr. Kao Viet HIEU visited Polytechnic University. In the course of one of the meetings he noted on the successes of the Weeks of the Russian language in China and Spain and expressed his wish to hold an event of the kind in Vietnam. And, of course, he invited our specialists to take part in it. We started our preparations practically right after that: we developed a program, agreed on its components through space bridges with Vietnamese colleagues, and submitted the presentation materials. HSIEP instructors: Associate Professor Maria Yu. DOTSENKO and Russian language teacher Darya I. BALITSKAYA took active part in the preparation and implementation of the event. 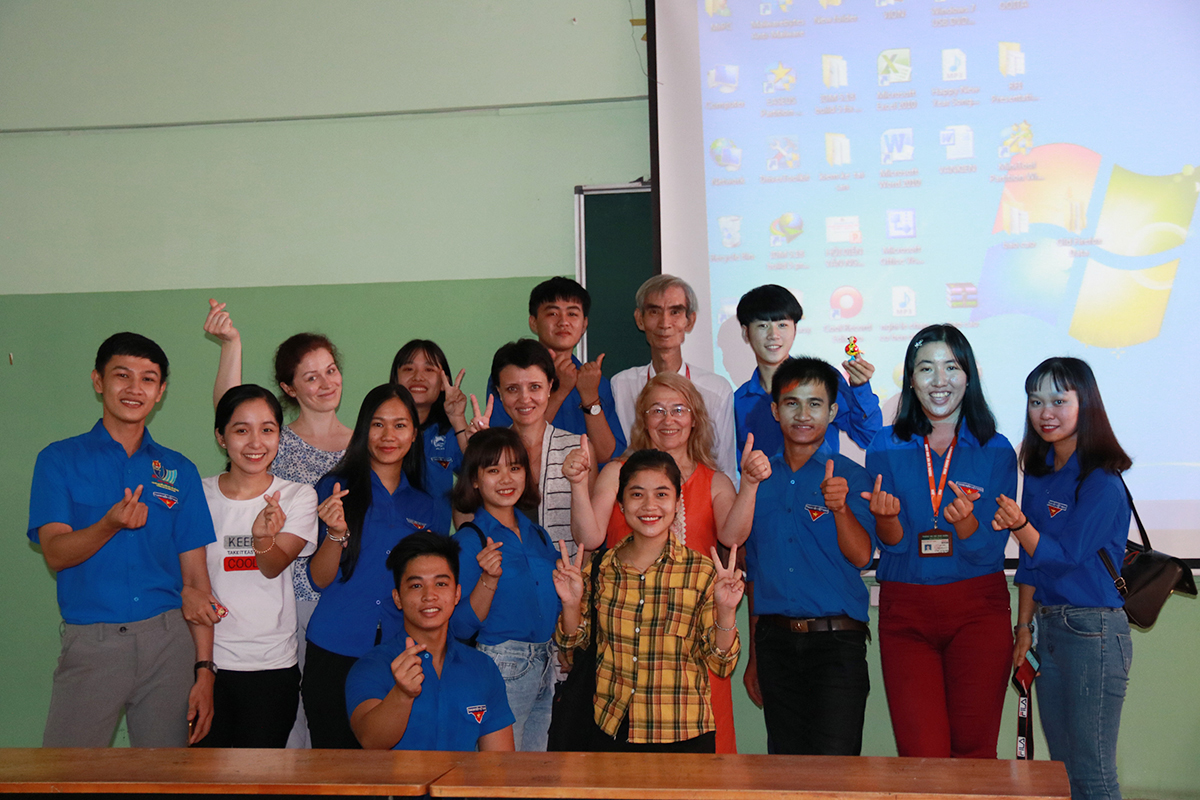 - What did the program include?

- So far, there is no systematic training in the Russian language at the Binh Duong University. For this reason, we decided to teach express courses for those students and teachers who know no Russian at all. Our program included classes in the Russian language and Russian culture, where we had introduced Vietnamese students to Russian folk art, Russian cuisine, Russian holidays, songs, and dances. 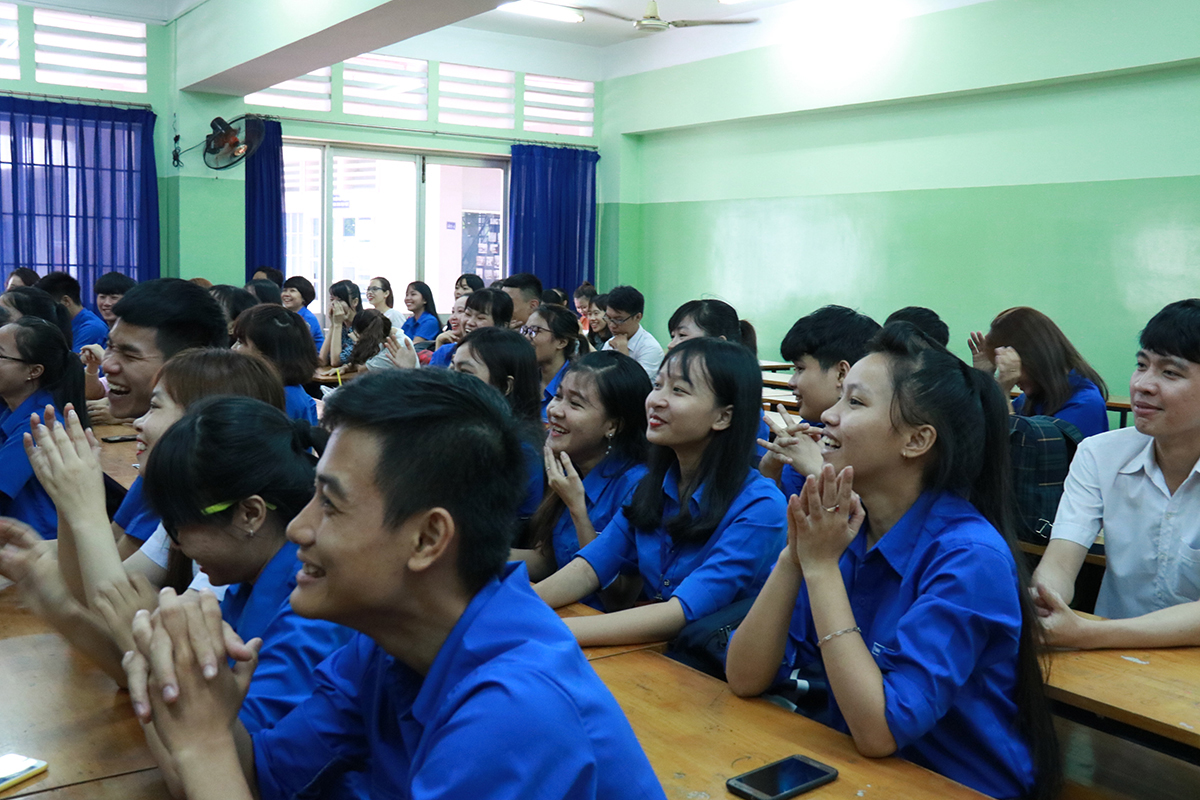 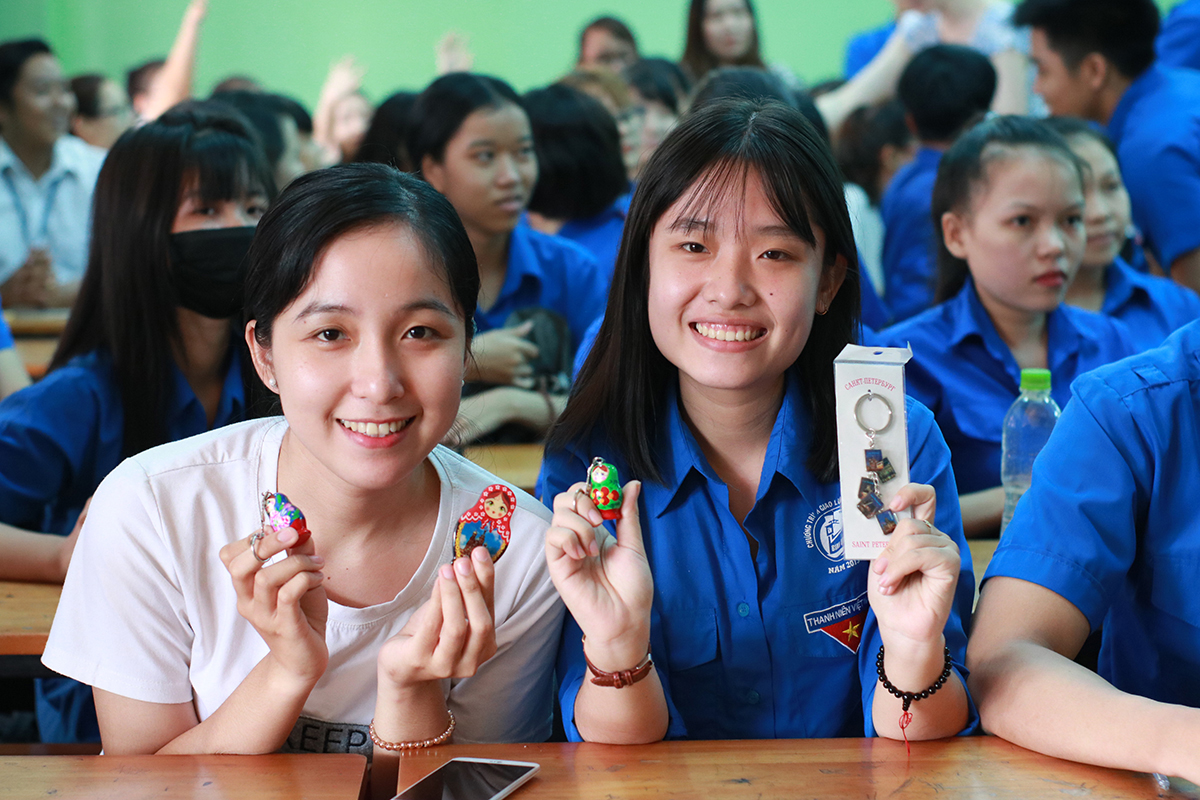 - Did you have any difficulties in the process of preparation?

- There were no particular difficulties but the work had been going in a pretty intensive manner. To make all classes utmost efficient, we translated our presentation into Vietnamese. Our student from Vietnam An TUNG, who studies at the Humanities Institute of Polytechnic University, helped us very much with that. The student audience was huge, and for that reason, the visual support in Vietnamese was extremely important. Our traditional quiz “What do I know about Russia?” had also been fully translated into the Vietnamese language.

In addition to educational and information materials, we had prepared a Russian cuisine class: this was something that the Vietnamese party had specifically asked for. Our foreign colleagues were particularly eager to try Russian blinis. We organized a traditional Russian tea party. From Russia we brought candies, gingerbreads, dried, jam for the tea drinking and, of course, treated all participants of the festival with pancakes, which we ourselves had baked for them. 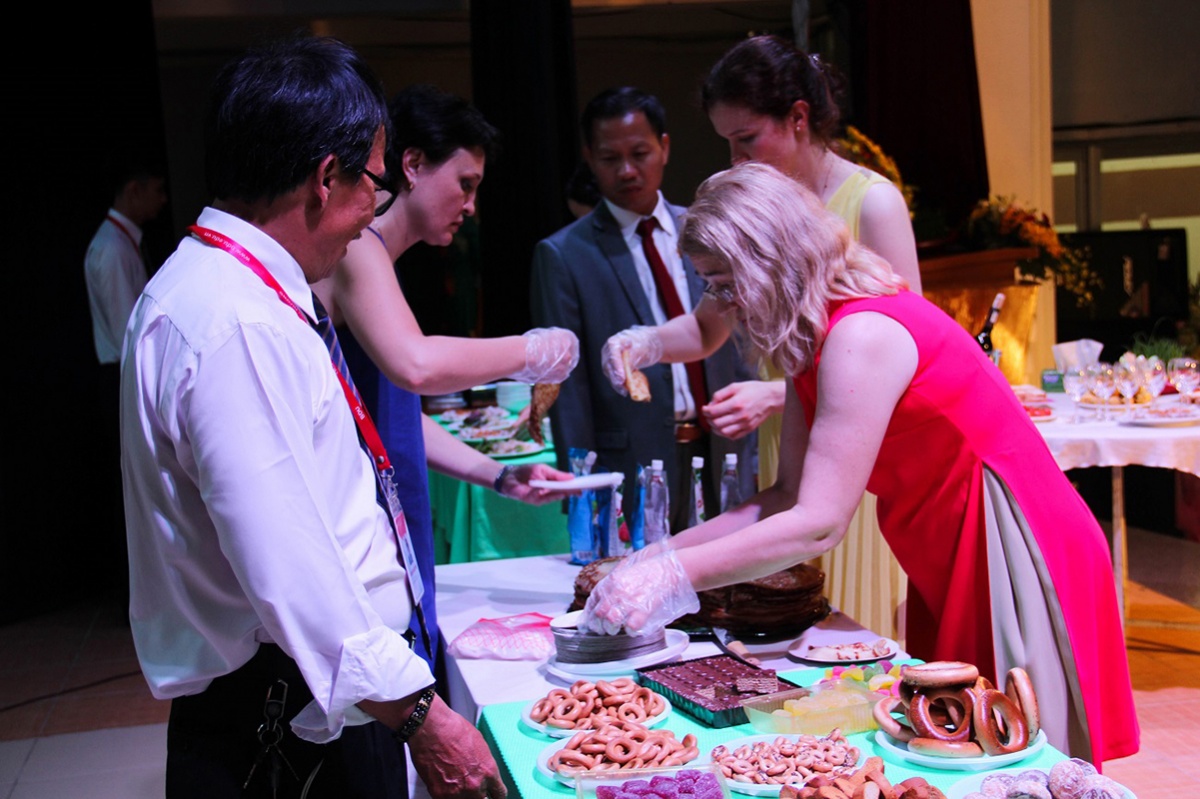 - How many students took part in the Russian language classes?

- More than 150 students. We had counted on approximately that many and brought from Russia certificates which presented to the participants after the classes along with some small souvenirs. I am sure that the moment of emotional engagement plays an important role in the process of mastering the Russian language, and the students who had attended our express courses had completely confirmed this: within only two hours, they learned how to greet each other in Russian, meet people, and tell about themselves. This was exactly what our express course was dedicated to: to develop students’ interest in learning Russian and getting the confidence that they could learn something during a short period of time. Just you try, and you will get the result! 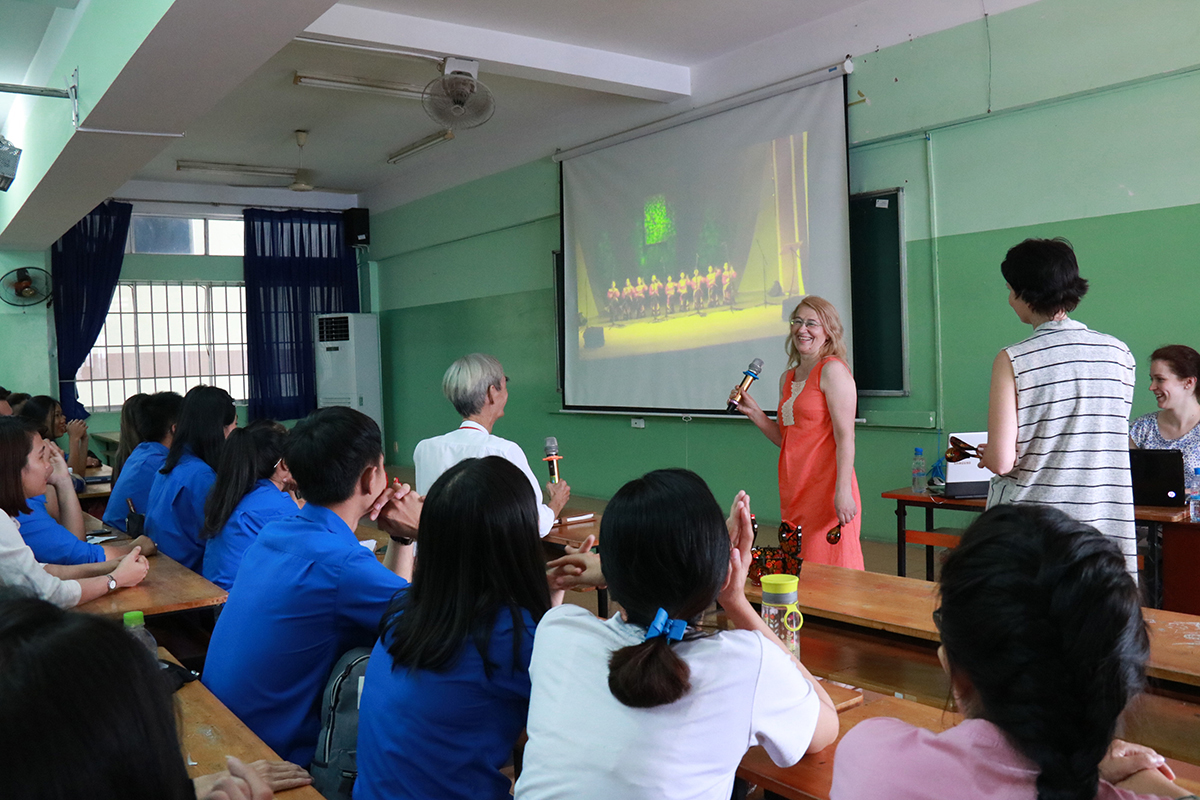 - Besides the Russian language classes, you and your colleagues took part in the concert program. Could you please tell us about it in more details?

- Our team performed four pieces: three popular songs and a Russian folk dance. The Vietnamese students and teachers welcomed us very warmly, all the more so that we started our performance with a short greeting in the Vietnamese language. They were actively supporting us. Altogether, there were about 400 people in the audience: the hall was packed. Also, the festival program included a choir performance of patriotic songs and dances, both traditional Vietnamese and Russian. 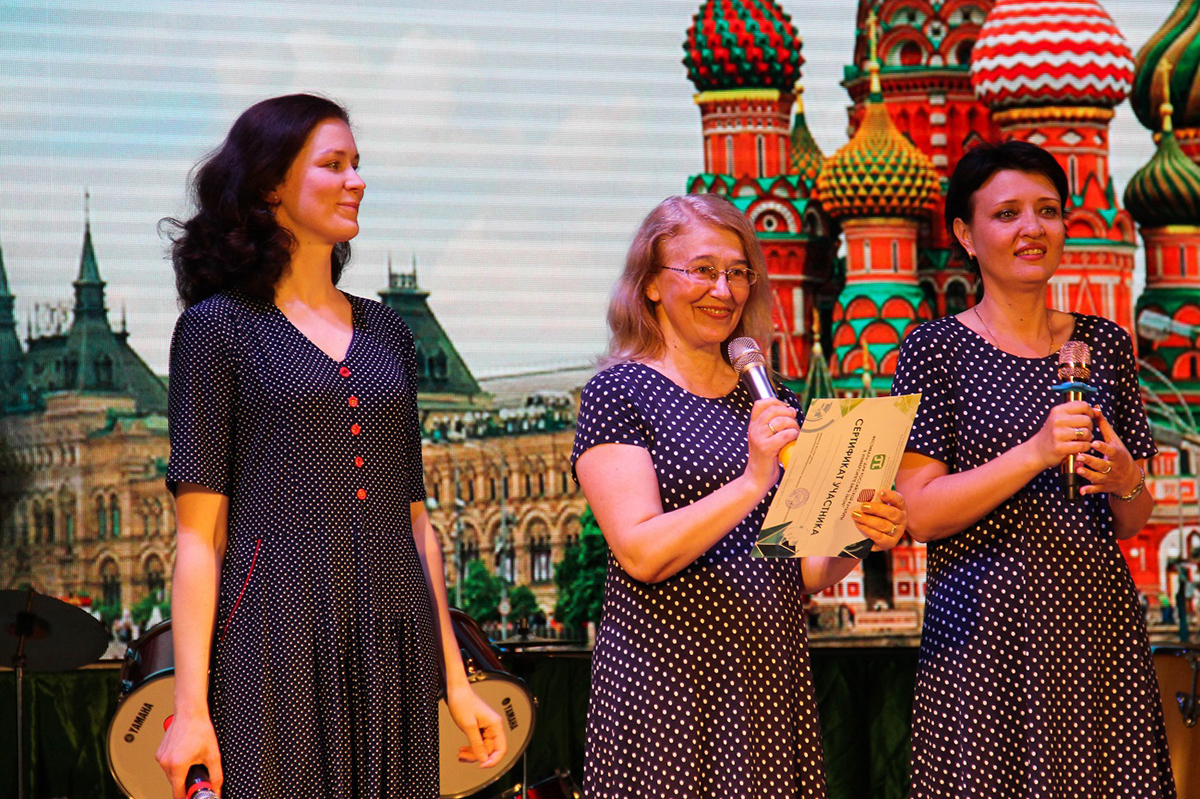 - Which of the performances impressed you the most?

- About 100 students danced a group dance in the inner yard, which had impressed literally everybody with perfect coordination and synchronicity. That was remarkable!

- As we know, right after the Festival at the Binh Duong University you and your colleagues went to Hanoi. What sort of event did you have there?

- We took part in the week of the Russian language which was timed with the birthday of Alexander Pushkin. If at the Binh Duong University our classes were focused on the student audience, while at the Russian Center of Science and Culture in Hanoi our team taught lectures for Vietnamese teachers of the Russian language. Vietnamese Russianists showed their great interest in perfecting their professional competence and engagement in the working process. Altogether, about 100 people took part in the classes. By the beginning of the Russian Language Week, a set of articles and methodical materials on “The Russian language in the Socio-Cultural Space of Vietnam” had been published; it also contained articles of our specialists. 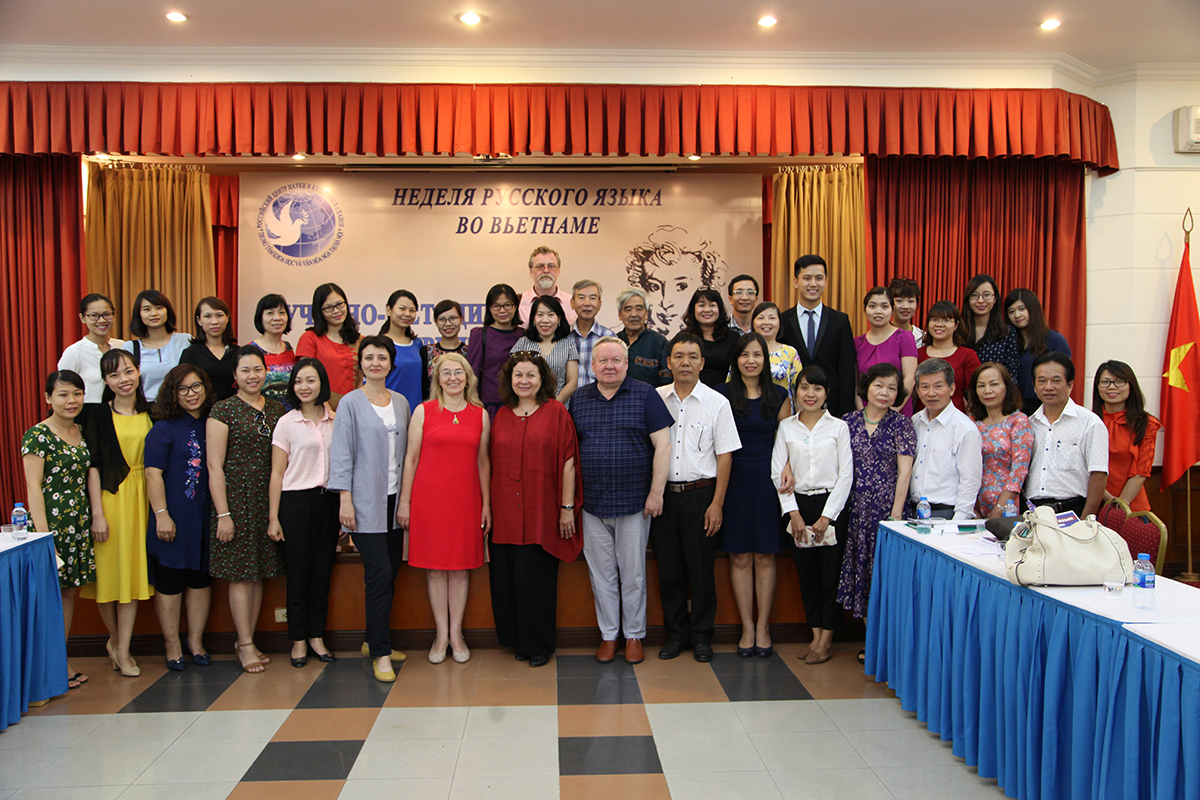 - What impressions did you get of Vietnamese students?

- Traditionally, we have many students from Vietnam at Polytechnic University. It is very pleasing that graduates do not forget us after coming back to their motherland. This was not my fist visit to Vietnam, and I am always glad to see my former students. Many of them had graduated from the university more than 10 years ago, and they come to our meetings with their families, and every year, our circle keeps growing. I like it that all they had learned here, in Russia, they are trying to teach their kids, and teach them love our country and St. Petersburg. For example, every year, my students celebrate “My first day in Russia.” In my opinion, this is quite symbolic. As far as Vietnam is concerned, this is a very fast developing country. However, it keeps its own traditions and its unique culture.

- Irina, thank you for the interesting interview! We wish you success and luck in your professional activities!