September Digest: News from the SPbPU Representative Office in Shanghai

The China International Industrial Fair, innovation forums, international conferences and new cooperation agreements – all that comprised last September for the official Representative Office of SPbPU in Shanghai. Our traditional news digest is about this and not only. 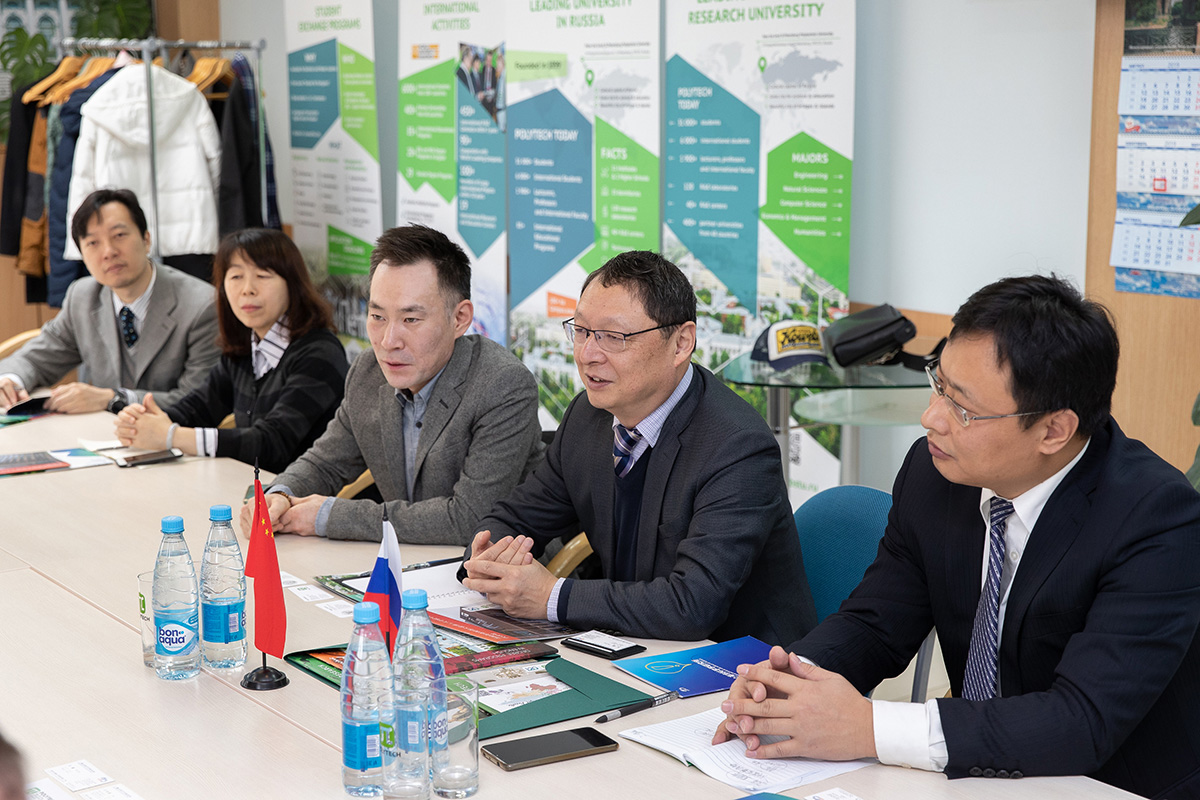 A delegation of the Research Institute of the Shanghai Academy of Sciences, headed by the director Mr. Shi QIAN, paid an official visit to SPbPU. The research institute is engaged in solving global problems at the state level - in particular, it is framing a long-term development plan for the entire city of Shanghai.

“Within the framework of the 15-year development plan of Shanghai, we are working to strengthen international relations. First of all, we are now interested in the development of artificial intelligence systems. We know that Russia has very strong mathematical schools; therefore, we are interested in cooperation with scientists of Peter the Great St. Petersburg Polytechnic University,” emphasized Mr. Shi QIAN. 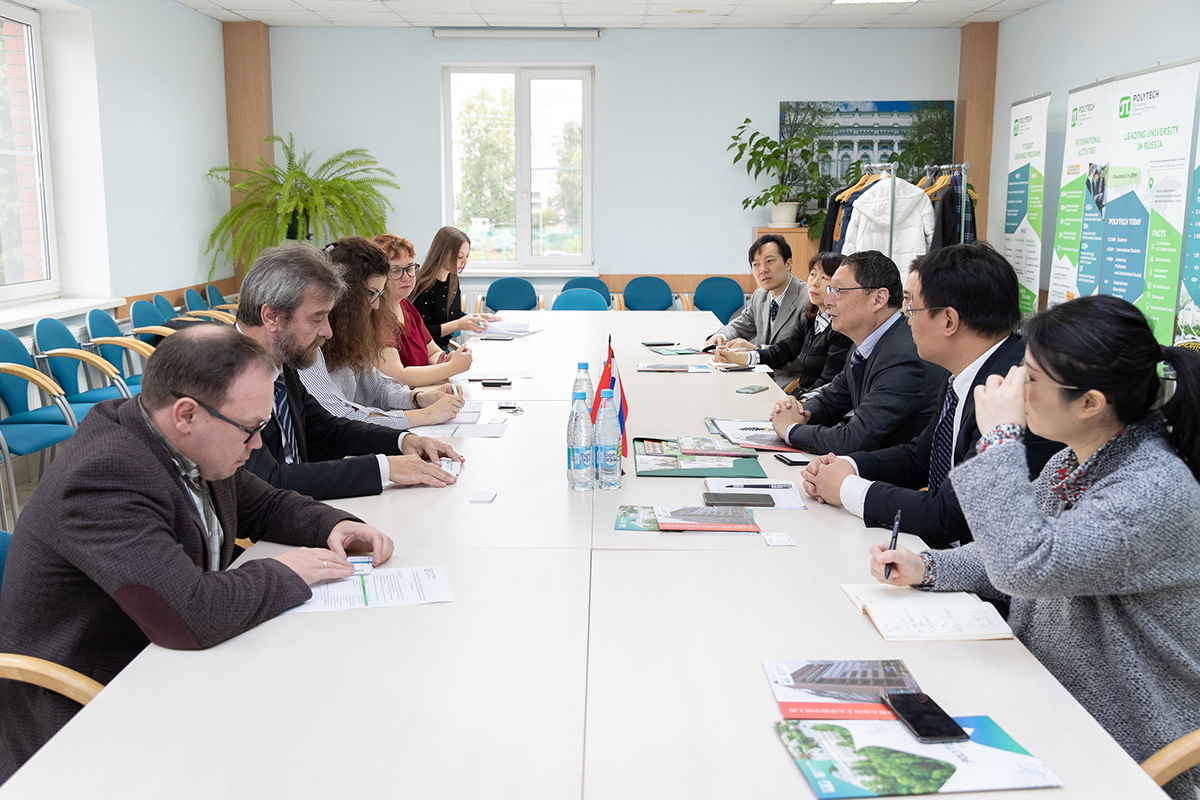 Chinese partners got acquainted with the projects of SPbPU scientific groups that are engaged in the development of artificial intelligence systems. Professor Lev UTKIN introduced the Doctor Azimov intelligent system for diagnosing tumors in the lungs. Professor Alexander ANTONOV spoke about computers able to save energy on supercomputers. Delegates of the Research Institute of the Shanghai Academy of Sciences praised the scientific achievements of the Polytechnics and plan to discuss their inclusion in the 15-year development plan of Shanghai.

Polytechnic University is participant of the CIIF 2019

The 21st China International Industry Fair (CIIF) took place in Shanghai. It was organized with support of PRC ministries and the Government of Shanghai. SPbPU takes part in the CIIF for the second time. This year, our university was presented at two booths. Participants and guests of the exhibition got acquainted with SmartFoil ultrafast cold soldering technology and ultra-sensitive thin-film sensors, which can significantly reduce the cost of electronic devices. Also, visitors could see samples of nanostructured lightweight concrete, which can significantly increase the bearing capacity of buildings; developments in cyber security and object recognition, and much more. 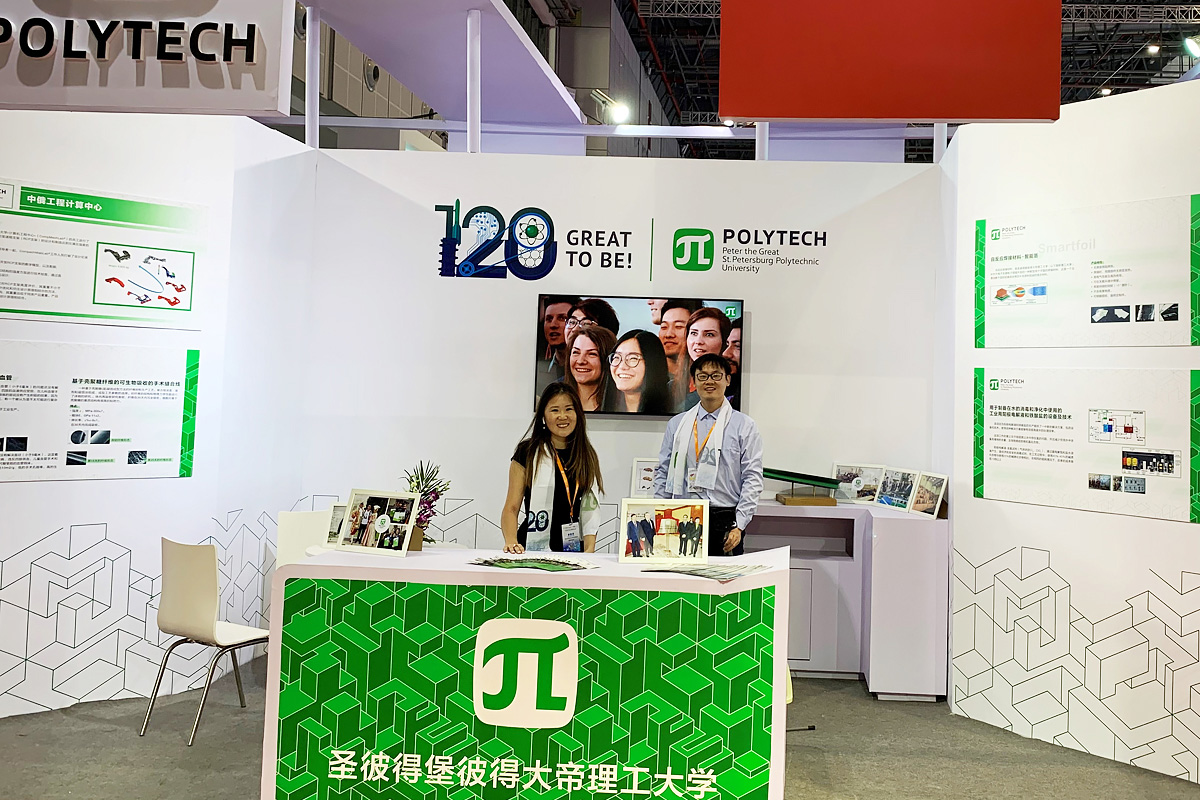 Live translation of the international conference on plasma physics

The first in Russia conference under the auspices of the world-famous scientific publishing house Nature Research was held at Polytechnic University. The conference called ‘Advances and Applications in Plasma Physics’ (AAPP 2019) brought together leading experts in the field of plasma physics from around the world. SPbPU Official Representative Office in Shanghai also became a venue for the international event. With the support of the Shanghai office, an online broadcast of speeches was organized, to which about 10 largest scientific organizations in China got connected. Among them were the Physics and Technical Institute of the Chinese Academy of Sciences, Xi'an University of Technology, Shanghai Institute of Industrial Technology, and others. 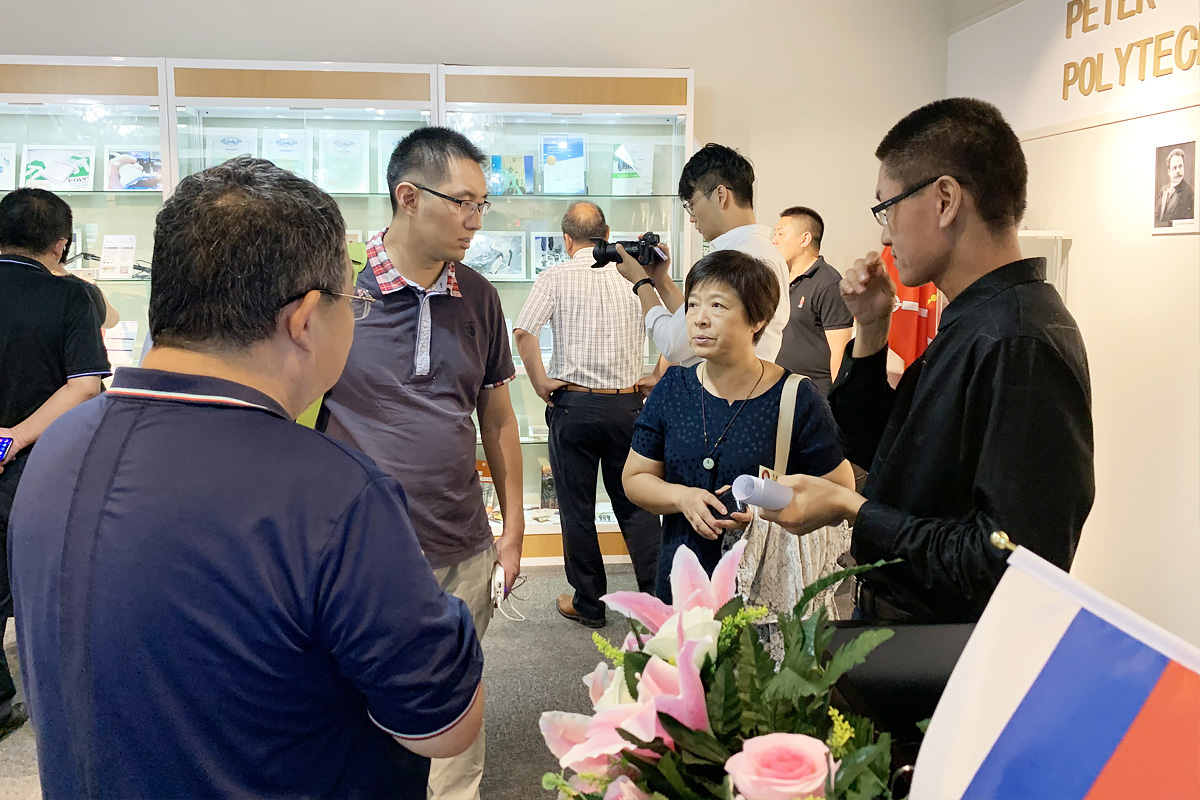 Russian and Chinese colleagues to solve environmental problems together

At the end of September, a delegation from the Shanghai Office of External Improvement and Gardening visited Polytechnic University. Chinese colleagues met with scientists from the Civil Engineering Institute (ISI SPbPU). During the meeting and the subsequent discussion, the most significant, typical for both sister cities environmental problems were identified. These include the increase in the urban population and large-scale development of urban infrastructure directly affecting the environment of the unique territories of the Neva River delta and the Neva Bay and the Yangtze River. Environmental protection and the search for joint innovative solutions to ensure the environmental safety of the lithosphere, flora and fauna became the key topics of the negotiations. 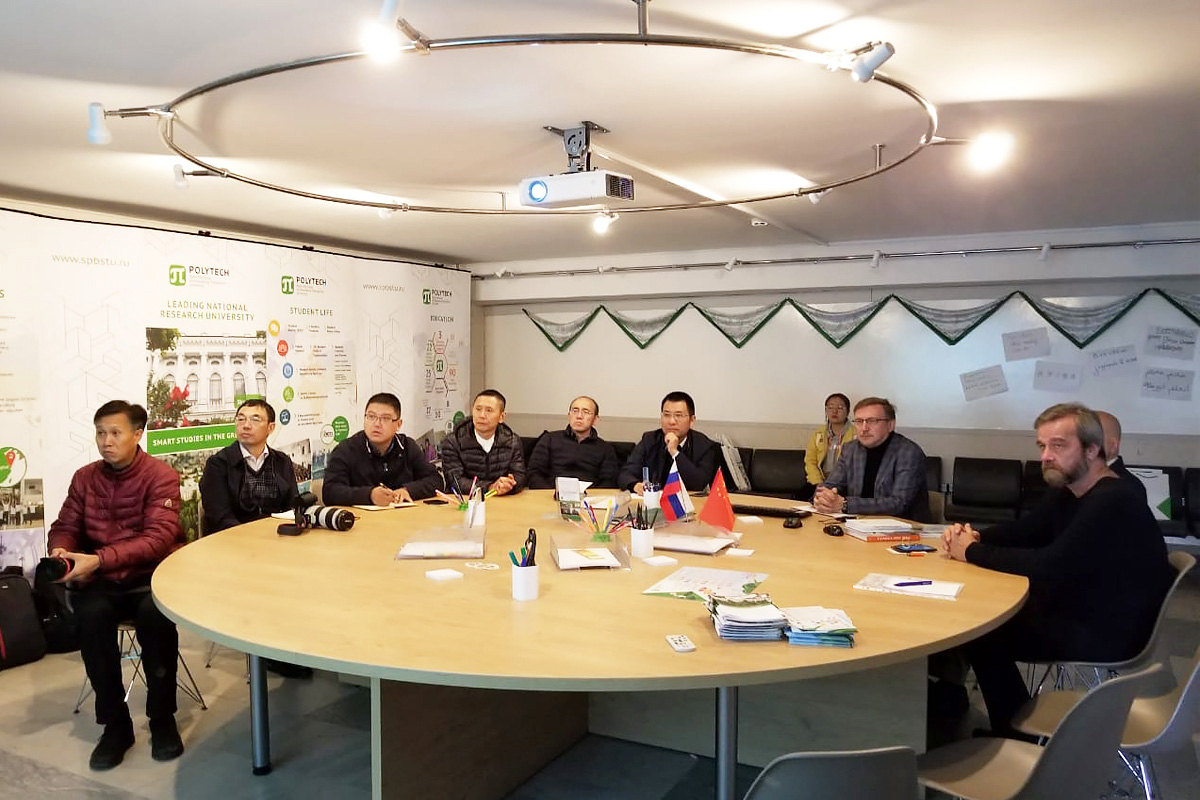 SPbPU scientists presented modern engineering developments to optimize such significant projects for St. Petersburg as the City Flood Protection Complex (FPC), new seaports, the Nord Stream-2 oil pipeline, Lakhta Center, etc. All of them were built and erected with the account of environmental protection innovations developed at Polytechnic University. During the meeting, reference points were identified for the two cities’ future joint activities concerning environmental issues. Members of the PRC delegation expressed interest and willingness to conduct joint research and design works for the development in urban areas of Shanghai and St. Petersburg.

In September, SPbPU signed an agreement on cooperation on short-term programs with the East China Polytechnic University. The plan is that the Chinese university will send students for internships at the International Polytechnic Summer and Winter Schools. Next year, groups of students will come to SPbPU to study energetics, materials science and the Russian language.

The memorandum on cooperation and joint innovation in the field of applied technology was signed by SPbPU and the Shanghai Academy of Sciences. And finally, our university signed cooperation agreements with the Educational University of Hong Kong. It is supposed to work together on creating joint publications, invite Russian and Chinese professors to give lectures, participate in scientific conferences, cultural exchanges and humanitarian cooperation.

Polytechnic University is a participant in the Sino-Russian Innovation Dialogue

In late September, a delegation of Polytechnic University took part in Chinese-Russian Innovation Dialogue, in the framework of which negotiations on cooperation were held with the leadership of Xi'an University of Technology. Based on the successful experience of bilateral cooperation, the parties discussed the possibilities of establishing a new joint center and cooperating in the field of technology transfer and promotion of innovative projects on the Chinese market. Furthermore, in the framework of the plenary session, representatives of SPbPU presented the best innovative practices of SPbPU with an emphasis on cooperation with China. 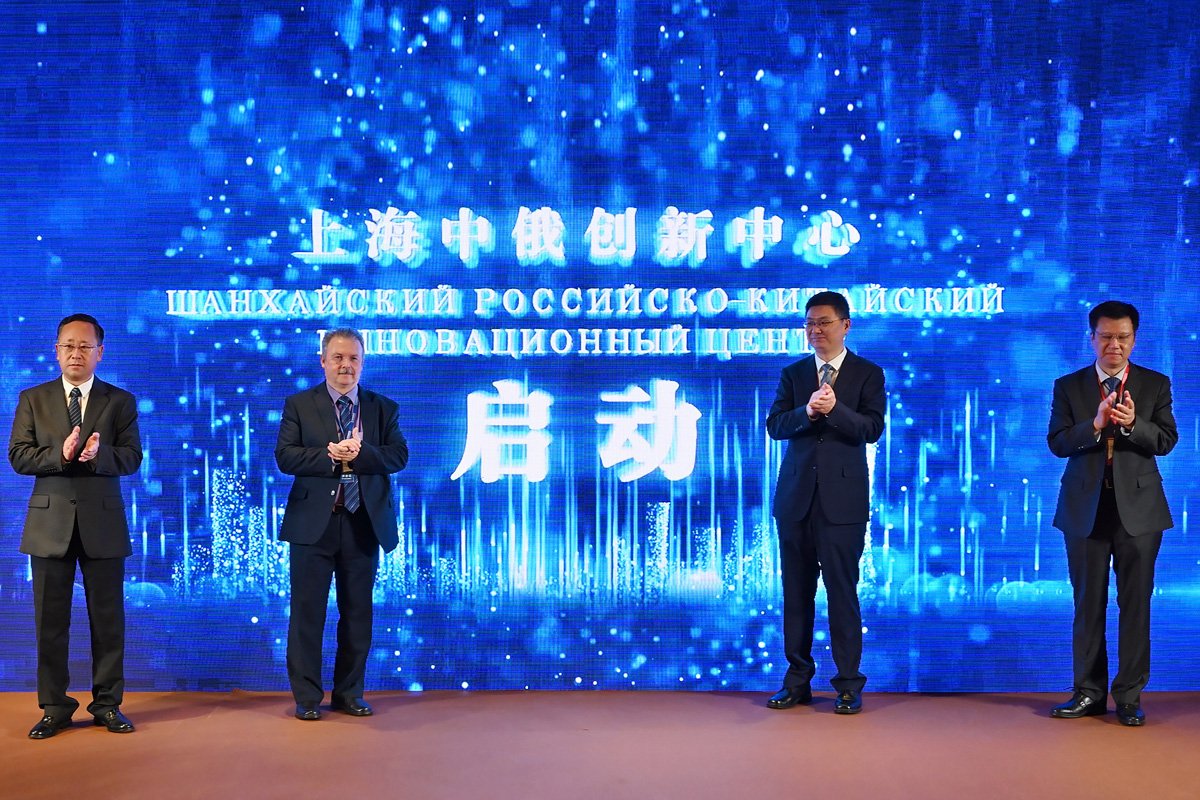 Polytechnic University’s activities within the framework of the National Technological Initiative were also presented, as was a promising project to create a national scientific and educational cluster - the federal center Technopolis - at the base of SPbPU. This information quickened interest of the Chinese innovation community.

Polytechnic University took part in the International Silk Road Forum, in the framework of which a seminar of the Belt and Road Science and Innovation Network (BRSIN) took place. Under the chairmanship of Shanghai Jiao Tong University (SJTU), a meeting of the executive committee of the BRSIN, which Polytechnic University joined in 2017, was held. SPbPU made a proposal to strengthen the practical cooperation of universities within the network; in particular, cooperation in the field of promoting innovative projects and the implementation of joint project activities of students from the universities participating in the network.