"What We are Creating Now is the Beginning of a Long Journey," Dmitry Medvedev Praised the Polytech Student Know-How

It was not only the researchers of Peter the Great St. Petersburg Polytechnic University who demonstrated their latest and advanced developments to the country’s top leadership, but also the students and postgraduate students. They showed their know-hows to the Prime Minister of the Russian Federation Dmitry Medvedev during his visit to the Polytechnic University. 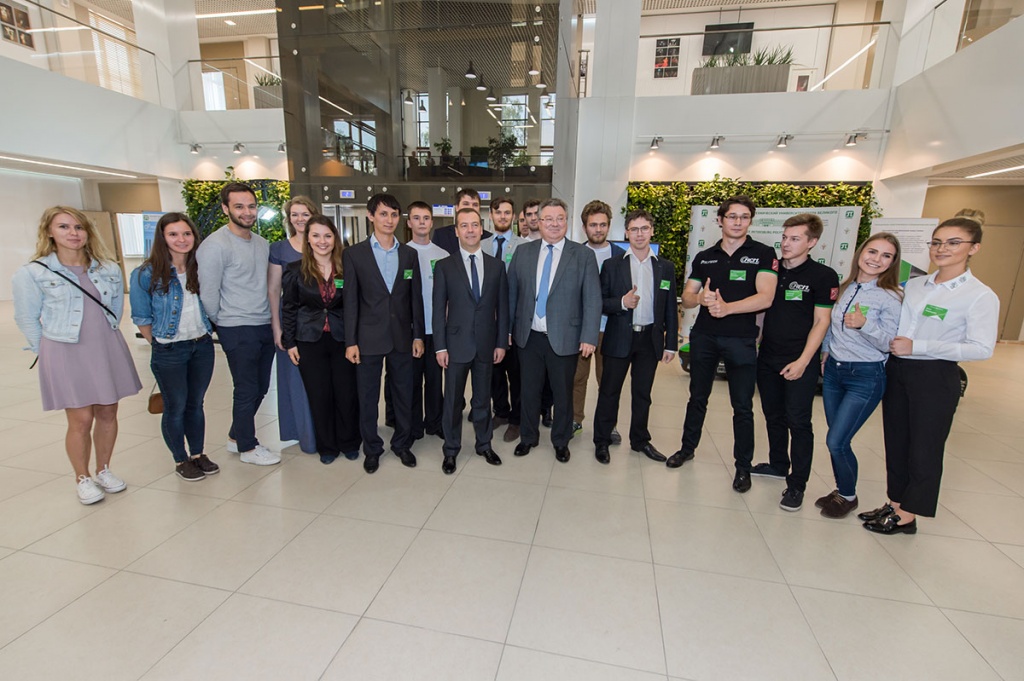 At the premises of the University the Prime Minister held the Presidium Meeting of the Presidential Council of the Russian Federation on economic modernization and innovative development of Russia. The participants of the meeting discussed the potential of universities in the implementation of the National Technological Initiative (NTI). During the meeting, D.A. Medvedev noted that to take part in NTI universities should encourage students to solve technological problems, as only in this case it will be useful both for universities and young professionals. The Prime Minister was able to see for himself how seriously Polytechnic students are involved in research and technical creativity during the exhibition of student engineering projects. 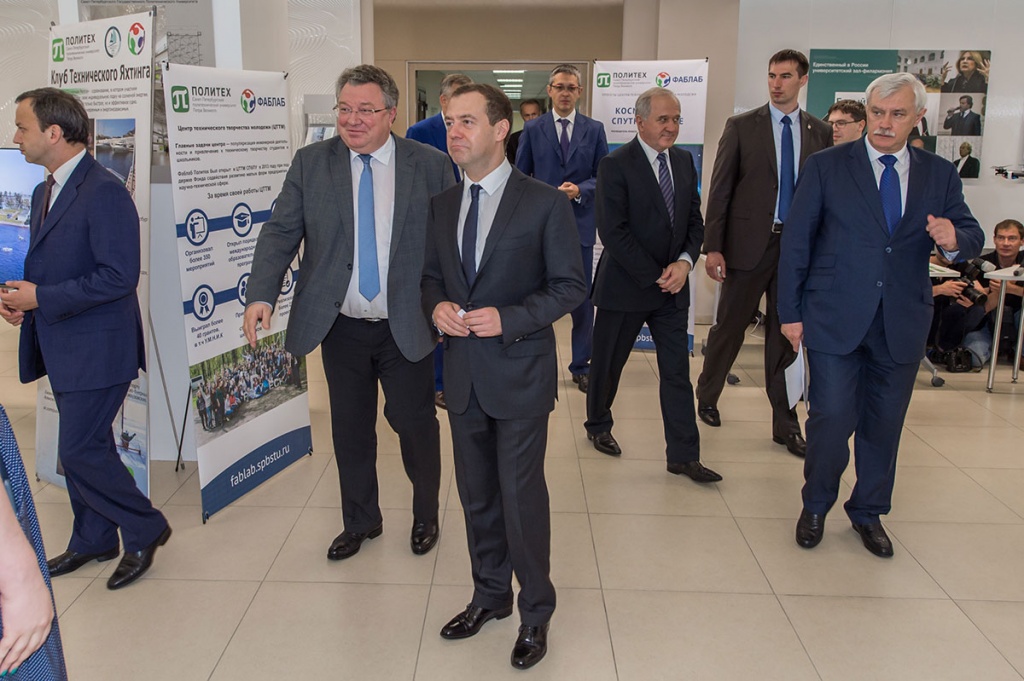 The Prime Minister started the exhibition at the stand of the SPbPU Center of Youth Technical Creativity (CYTC). The Head of the Government was told that the main task of the center is to promote engineering and to involve students and schoolchildren in technical creativity. The CYTC Deputy Director Polina Dyatlova told about the structure of the Center, one of the largest divisions of which is "Polytech Fab Lab", a unique workshop for students and schoolchildren. The Fab Lab educational mission is to open (as compared, for example, with factories) the access to the equipment and to train industrial skills, because in the Fab Lab the product goes through all the stages from an idea to a prototype. For this purpose it is necessary to have a broad range of skills, including both milling and 3D-modeling as well as the skills to create programmable cards. And this is not taught everywhere. The CYTC regularly gives intensive courses for schoolchildren and engineering schools for students and postgraduate students. As part of the NTI the Center of Youth Technical Creativity takes an active part in the development of the extra class activities. Besides, the Fab Lab regularly helds workshops and courses on digital production, 3D-modeling and programming, the Internet of things, etc. 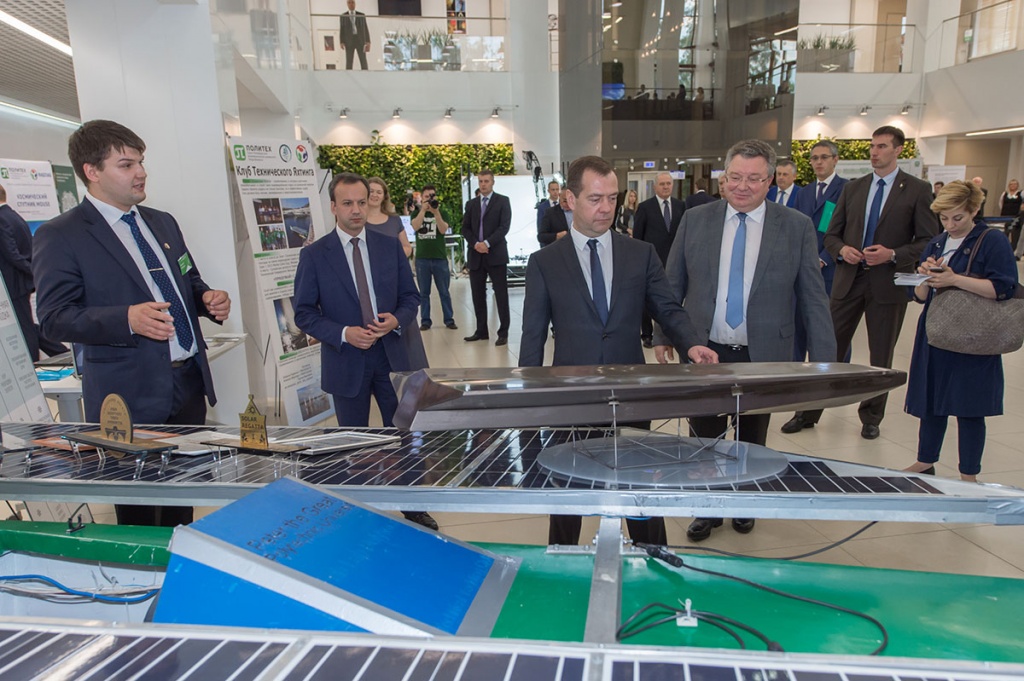 At the stand of the Technical Yachting Club the Prime Minister stayed longer. This is one of the divisions of the Center of Youth Scientific and Technical Creativity of the Polytechnic University, whose members are united by a single passion - the sea, the wind, sports, and of course, the passion for science and invention. "One of the major projects of the club is the development of a racing boat on solar energy to compete Solar Regatta, an engineering competition which is very popular all over the world," said the postgraduate student Aleksey Maistro. "And do we have enough sun for it here in St. Petersburg?" laughed Dmitry Medvedev. The students assured that there is enough sun in St Petersburg and said that these boats have proved effective in the Regatta in Monaco. 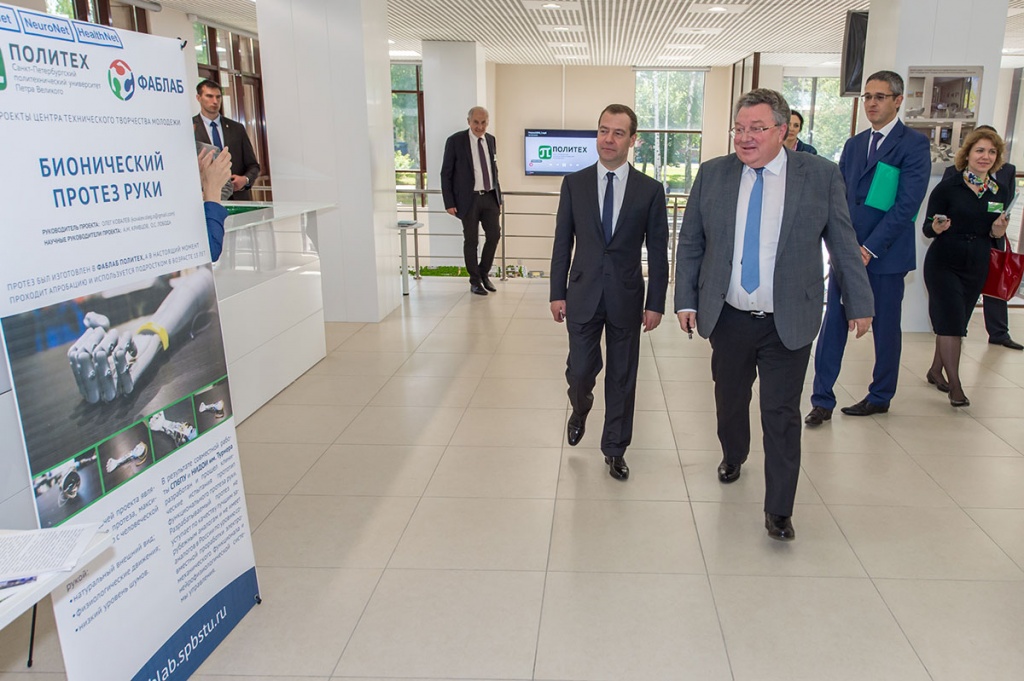 The student Oleg Dyatlov introduced the so-called "neurocar", a car which can be controlled via neurointerface technology (when the human brain produces electrical impulses of varying strength, transmitted via Bluetooth). "Neurointerface reads brain impulses and displays two indicators: concentration and meditation. With these indicators we can control the car. When you start thinking about something, the car begins to move forward. The more you think, the faster it goes. If you relax, the car turns to the right, and if your attention is fully distracted, it slows down. At the moment, this car is one of the first examples in Russia," said Oleg, explaining that it can be useful, for example, for people with disabilities, who will soon be able to control their cars thanks to this technology. 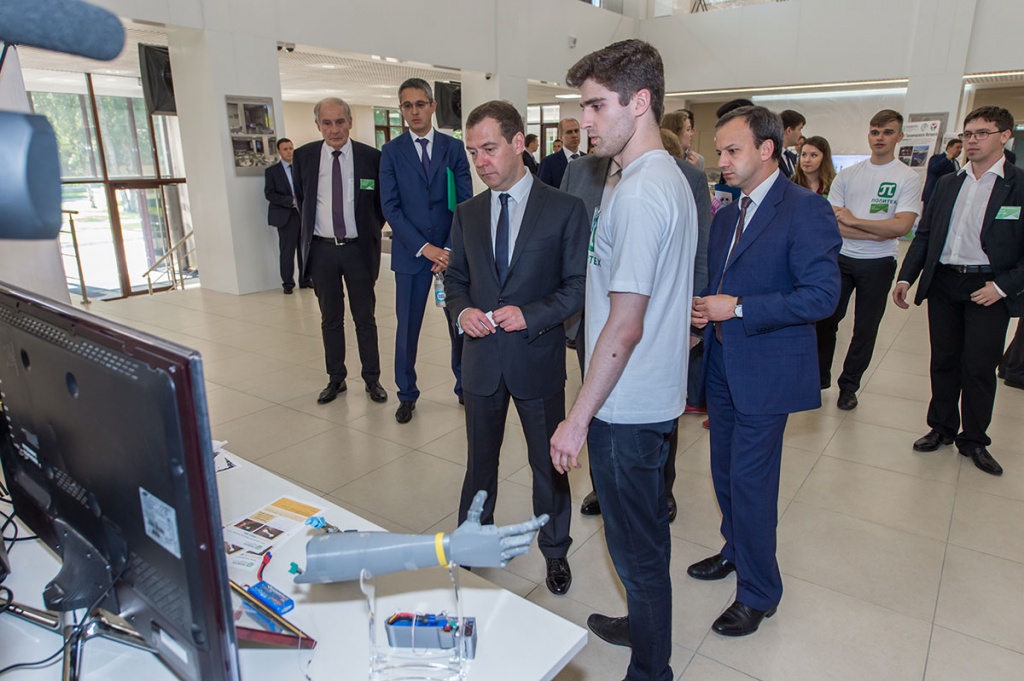 Approaching the next stand, which introduced a bionic hand prosthesis, SPbPU Rector A.I. Rudskoy addressed the Prime Minister: "Can you imagine that the students have created it, Dmitry Anatolyevich?" "Does that surprise you?" joked D. Medvedev. "No, it’s just I’ve been watching them for so many years and I never cease to admire them!" explained the Head of the University. The author of the project, the student Oleg Kovalyov, told about the prosthesis: "The work on the project, aimed at creating a functional prosthesis of the upper limb with neurophysiological adaptive control system, is being conducted together with the Institute of Children Orthopedics named after Turner. Our main task is to create a prosthesis, the most similar to the human hand. This includes "natural" appearance and "natural" motion, low noise level, and a simple and intuitive control system". According to Oleg, this is the fourth prototype of the prosthesis for the 15-year-old girl, whose right arm below the elbow hasn’t functioned since her childhood. This development more or less allows her to lead a normal life. 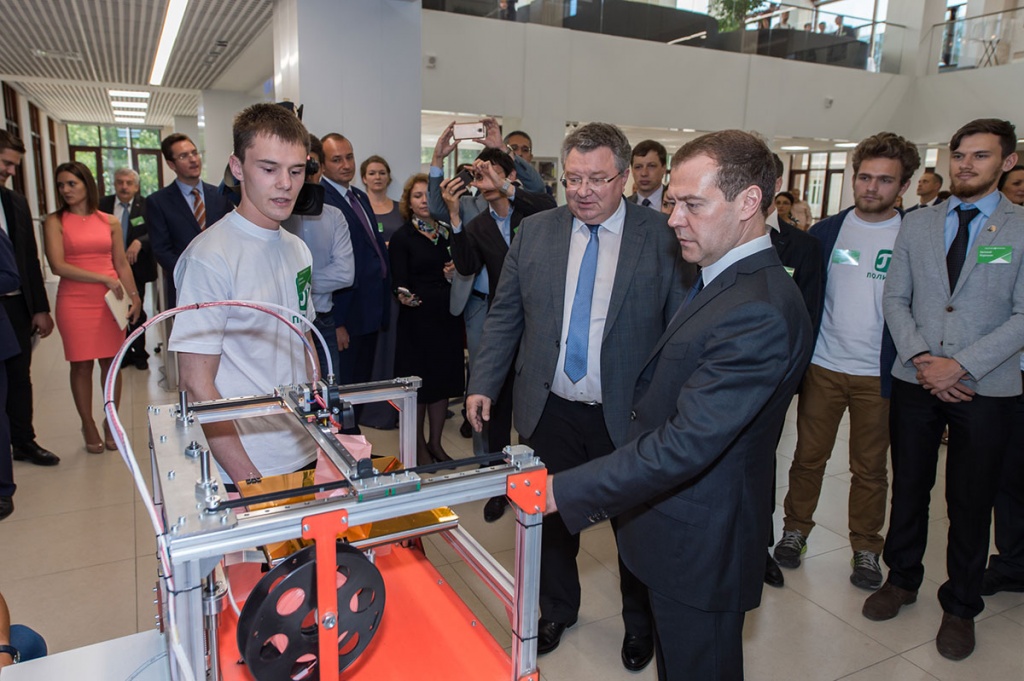 One more student Denis Dzeynushko gave presentation on Russia's first set of affordable digital industrial equipment, developed by the SPbPU Center of Youth Technical Creativity together with "Photomechanics" with the support of the Fund for the Development of Small Innovative Research Enterprises in the Sphere of Technology. "The set consists of a 3D scanner, a 3D printer, a laser machine and a milling machine, as well as some manuals on how to use this equipment in the educational process. In 2035 within the framework of the extra class activities of the National Technological Initiative we are planning to open 50 thousand digital industrial laboratories throughout Russia, equipped with our sets. Now there are only 200 of them," explained Denis. 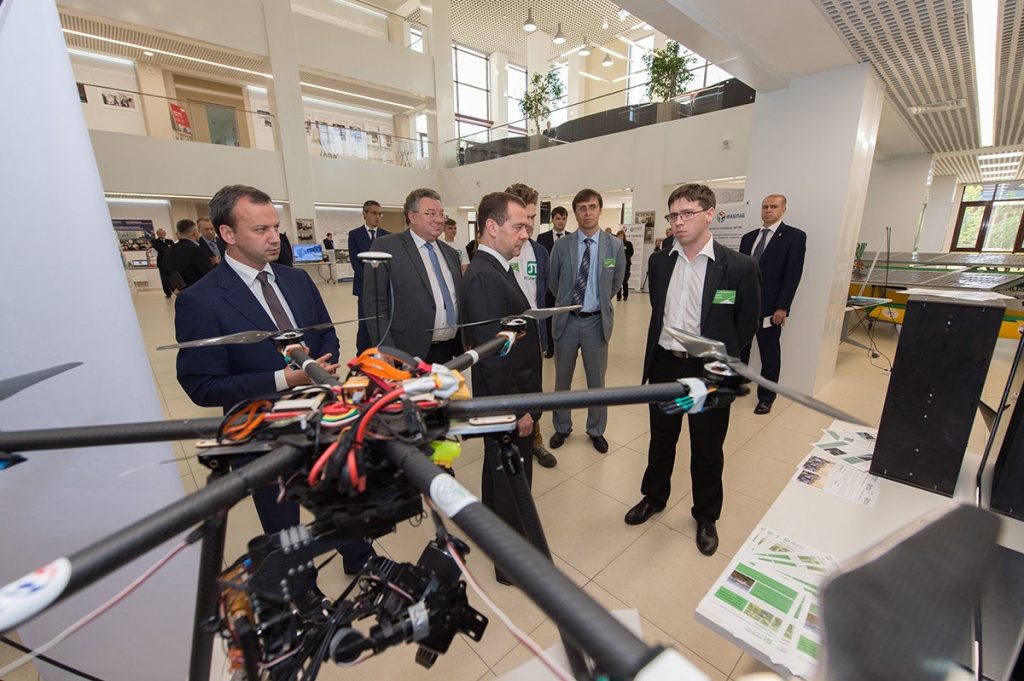 As part of NTI direction AERONET the student laboratory "Polytech Satellite" is developing the first student satellite of the Polytechnic University. The satellite will consist of two modules connected with a cable. It will solve a number of important tasks such as it will explore the near-Earth plasma, test power generation system using cable systems, help to develop solar photon sail. The student Andrey Murachev explained the problem statement of the project: "The use of cable-satellite systems is urgent in the outer space, but none of the problems connected with this use has some reliable solution so far. Thus the proposed mission can be considered revolutionary from a technological point of view". He also said that the laboratory has already developed a simulator of the Earth's magnetic field, which helps to test the satellite system of stabilization and orientation. As for the scientific support, the students get it from the staff of university laboratories. In addition, a scientific and production cluster is being created together with JSC "Arsenal". "What we are creating now is the beginning of a long journey. I am sure that the future of the near-Earth space industry lies behind small devices. The potential of such small devices is hasn’t still been properly studied. And the solutions we found can be a great contribution to domestic and world astronautic science," Andrey summed up enthusiastically. The Prime Minister was shown another student project, which is implemented in the Polytechnic University under the NTI AERONET technological market. It is a multirotary unmanned aerial vehicle (UAV) – a hexacopter. 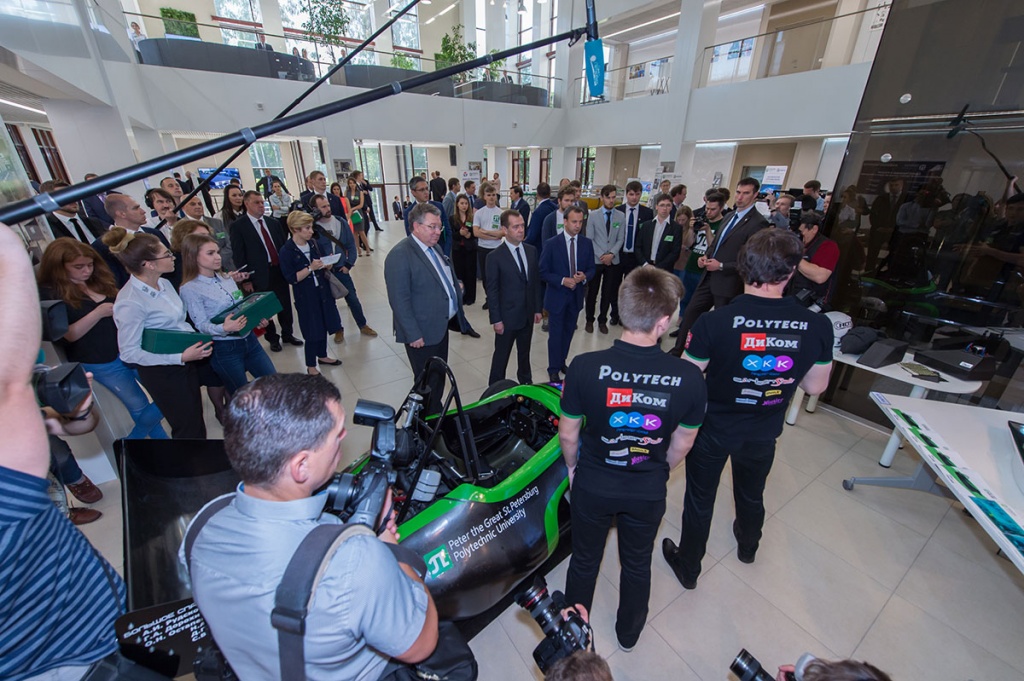 A little farther there was a race car designed by the students. This sports car was created to take part in the competition "Formula Student", and is capable to accelerate to the speed of 100 kilometers per hour within three seconds. The project manager, a postgraduate student Evgeniy Zakhlebaev said that this is the first and so far the only in the North-West region of Russia racing car, designed according to the rules of international regulations to participate in the World University Racing Series. "First, we fully modeled the vehicle virtually, and then began the process of producing and assemblying. We conducted the research on the power unit, in which we built a custom control unit, produced in St. Petersburg, and wrote our own engine control program," explained Evgeniy. In addition, he said that to produce the parts they used advanced manufacturing technologies such as vacuum infusion (to produce the parts made of carbon fiber, such as aerodynamic body kit, steering components, fuel system) and SLS-growing - the type of 3D printing, based on stratified sintering of the powder materials with a laser ray (the intake system).

The students also told that they have a project of a car, powered by solar energy. They are going to take this car with them to Australia to participate in the international competition World Solar Challenge. The rule of the competition is to drive 3,000 kilometers from the north to the south of Australia using only solar energy. 43 teams from 23 countries from around the world are going to participate in the competition. "So far we are the first and the only Russian university team that has applied to take part in this rally in Australia. Now our project is still under development. We are planning to use the most advanced engineering technologies such as innovative materials, bearing monocoque with aramid floor protection, recuperative braking system, driving control system," continued the head of the team. The students also emphasized that the key feature of their project is the use of solely home-produced components (composites, electric motor, solar panels). The model of the solar vehicle body has already been created for the aerodynamic research. "The Australians were delighted – "The Russians are arriving!"" said the students to the Prime Minister. "Watch out for Australian animals," joked Dmitry Medvedev.