What the Members of WC2 Have Proposed: the Summary of Symposium in Brazil

Brazil welcomed the participants of the World Cities World Class University Network (WC2) symposium with rains: when we have summer in Russia, there is winter in South America. However, the SPbPU team was not afraid of it: the participants, tempered with St. Petersburg climate, found that the process of acclimatization had passed completely unnoticed. In 2016 WC2 symposium was held in Berlin, in 2017 it was the turn of Sao Paulo. 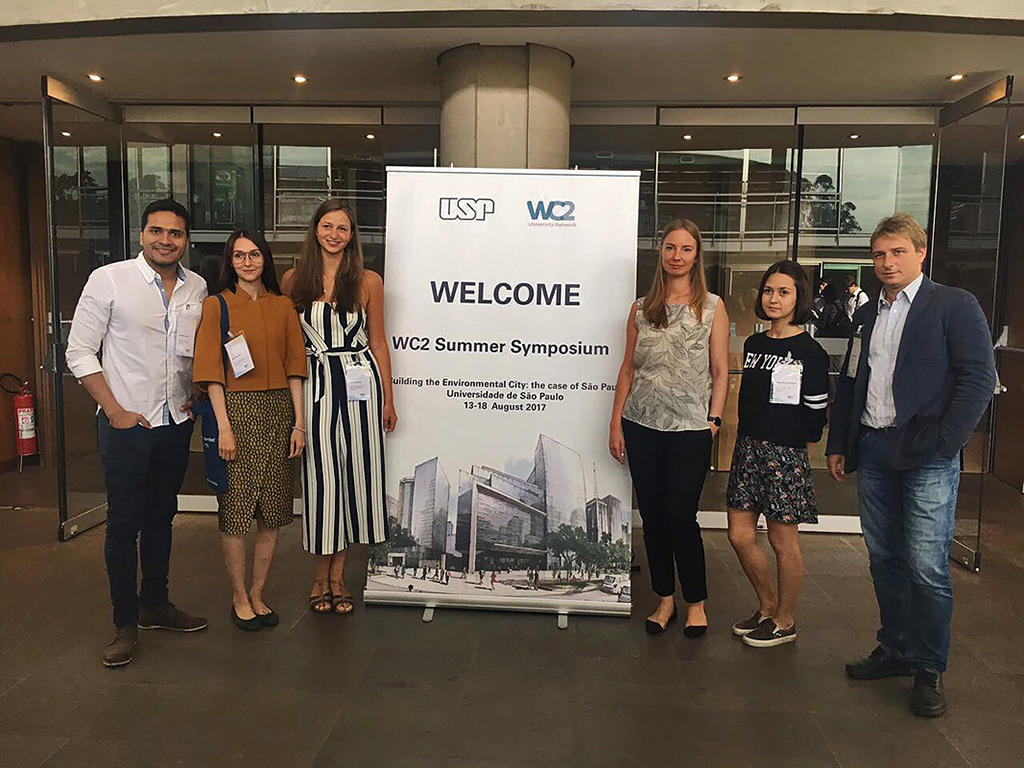 Every year the representatives of 11 Universities offer different types of problem solving for a particular city. Sometimes they find a reflection in the life of other cities. For this case the participants choose one of five clubs to be further divided into teams. Each team presents a project, and at the final presentation shares its ideas and suggestions with the audience. This year there were such clubs as Business, EcoCampus, Global culture, Global Health and Transport. The participants from Polytech took part in most of them. SPbPU representatives were the director of the Graduate School of Engineering of the Institute of Computer Science and Technology (ICST SPbPU) P. DROBINTSEV, Associate Professor of the Institute of Humanities N. NIKIFOROVA, assistant of the Hydraulics Department of the Institute of Civil Engineering (ICE SPbPU) D. ZABOROVA, PhD student of the Institute of Physics, Nanotechnology and Telecommunications (IFNT SPbSPU) A. REVITZER, students of SPbSPU M. ASYLGARAEVA and J. BONIVENTO.

Professor Stanton Newman, Chair of the WC2 University Network, wished the participants of the symposium fruitful and productive work, inspiration and creative ideas. He added that the special atmosphere of multicultural community promoted the working environment in a perfect way. 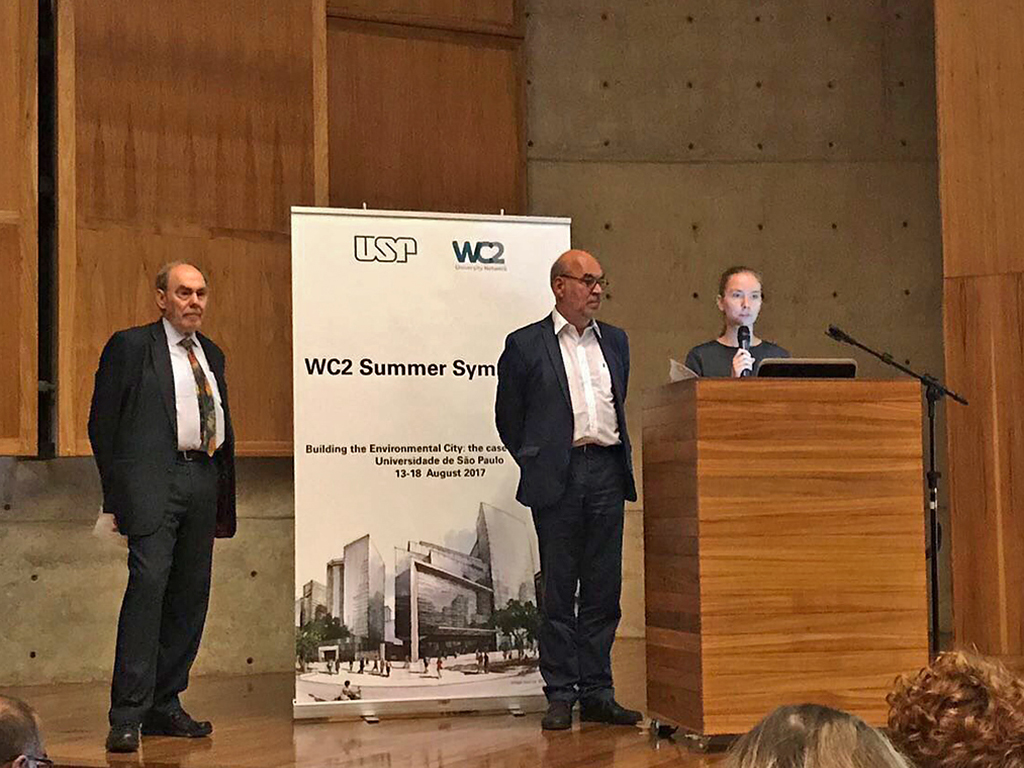 SPbPU representatives participated in 4 clubs. D. ZABOROVA, M. ASYLGARAEVA and J. BONIVENTO joined EcoCampus. They tried to solve the problem of favelas - slums within the city. The participants created the projects of the buildings, which could serve as gateways for the poor parts of the city, help the citizens adapt to new conditions and get education. In their presentations there were various building models and surrounding infrastructure, designing ideas, implementation schedules. To reduce the energy consumption the participants offered to build rainwater collection tanks. The water from them could be used for irrigation or other needs.  Also they had ideas to create refrigeration system without air conditioning, to use solar batteries, etc.

P. DROBINTSEV joined the Transport club. Sao Paulo is the city of cars, and there are few crosswalks, pavements and traffic lights; while according to unofficial data the number of inhabitants of Sao Paulo reached 20 million people. In addition, there are many hills in the landscape of the city, and this makes the cycling difficult. At the domestic level the problem solving process has already started: nowadays there are about 500 km of cycle lanes, but it is not enough for such a big city. The members of the club offered to build cycle lane taking into account the features of the landscape that will make cycling comfortable. Also they offered to build a mobile application for bikers which could find the best cycling route. 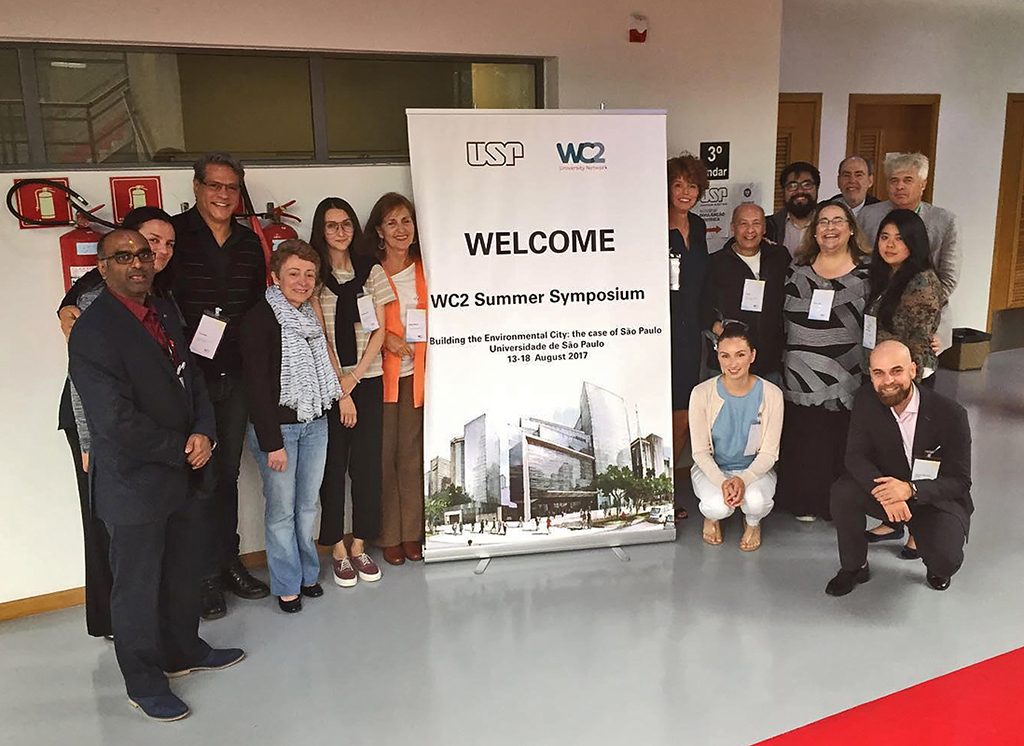 All of the participants of Global Health club (SPbPU representative was A. REVITZER) focused on helping the senior citizens. This problem is as relevant as ever: various researches showed that the world population is getting older; and fresh ideas and solutions are vitally important. The reports of many participants were dedicated to the creation of eco-surrounding for elderly people and the issues of aging. One of the speakers presented a TeleCare project, when a special robot monitors a patient, and a medical worker can contact a patient any time if it is necessary. Professor Stanton Newman, who is a heart health expert, also presented his report. He proposed a health care reform which could change patient admission process. Today the further treatment decision makes the therapeutic. Professor Stanton Newman offered to make patient admission process in such a way so the various specialists could conduct a medical examination, and make a treatment plan on this basis. 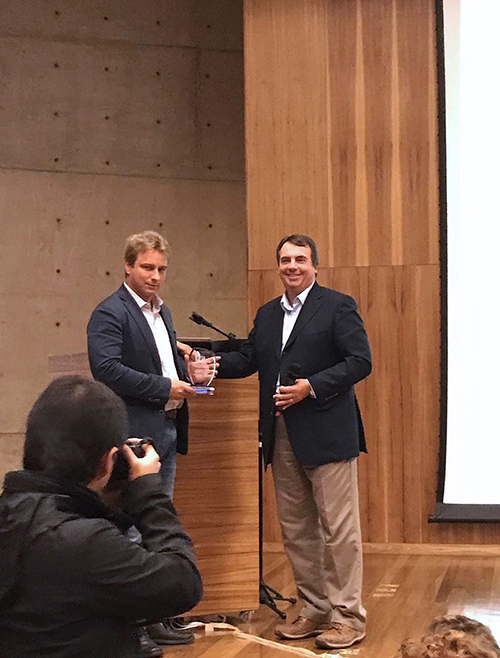 The members of the club made recommendations for the further researches. For example, they offered to increase the duration of green light on traffic signals, to equip buildings with ramps and lifts, to increase the number of specialists in gerontology.

In the clubs Global Culture (SPbPU presented N. NIKIFOROVA) and Business there was also an active work. Its participants made proposals of preservation of cultural values, promotion of modern art, made reports about upstarts and business incubators with account of local specifics.

Under WC2 symposium there was held a strategy group meeting which defined a direction of the further development of WC2. It is known that the next year there will be the new clubs about migration policy and food policy. Also the participants discussed various topics under IT club. The next city for WC2 symposium will be Toronto (Canada), and in 2019 it will be held in St. Petersburg (Russia).

'After such events as WC2 symposium people have only positive emotions, - says the director of the Graduate School of Engineering of the ICST of SPbPU P. DROBINTSEV, - when the people of different cultures come together, they understand that the problems in their cities are very different, though some of them have similar roots. And in their multicultural communication they have real chances to find timely and fast solution at minimum cost'.