U.S. students took an intensive course of the Russian language within the frame of the International Polytechnic Summer School

The official opening of the International Polytechnic Summer School will only take place next week. However, some of its educational modules have already started: in the first half of July, within the frame of the international project ERASMUS+ “InMotion,” a course dedicated to computer modeling had a great success. It was implemented at the base of the SPbPU Institute of Computer Sciences and Technologies.

Quite recently, one of the summer modules in the Russian language and culture was completed at the Higher School of International Educational Programs. Its participants were 17 students from the Georgia Institute of Technology, U.S. The month-long educational module presumed daily classes in the Russian language with division of students in three groups of different levels of complexity and a joint course in the culture of present-day Russia. For the full immersion in the environment, the students were living not in the dormitory but in Russian families. Interaction with teachers, members of the hosting families, and each other in Russian was an important precondition of the program. The outcomes are quite impressive: practically all participants of the Summer School noted significantly improvement of their language skills. Connor Dautel and Daniel Kuntz, students of the Georgia Institute of Technology shared with the SPbPU International Services their impressions about their life in Russia and special features of the educational process. 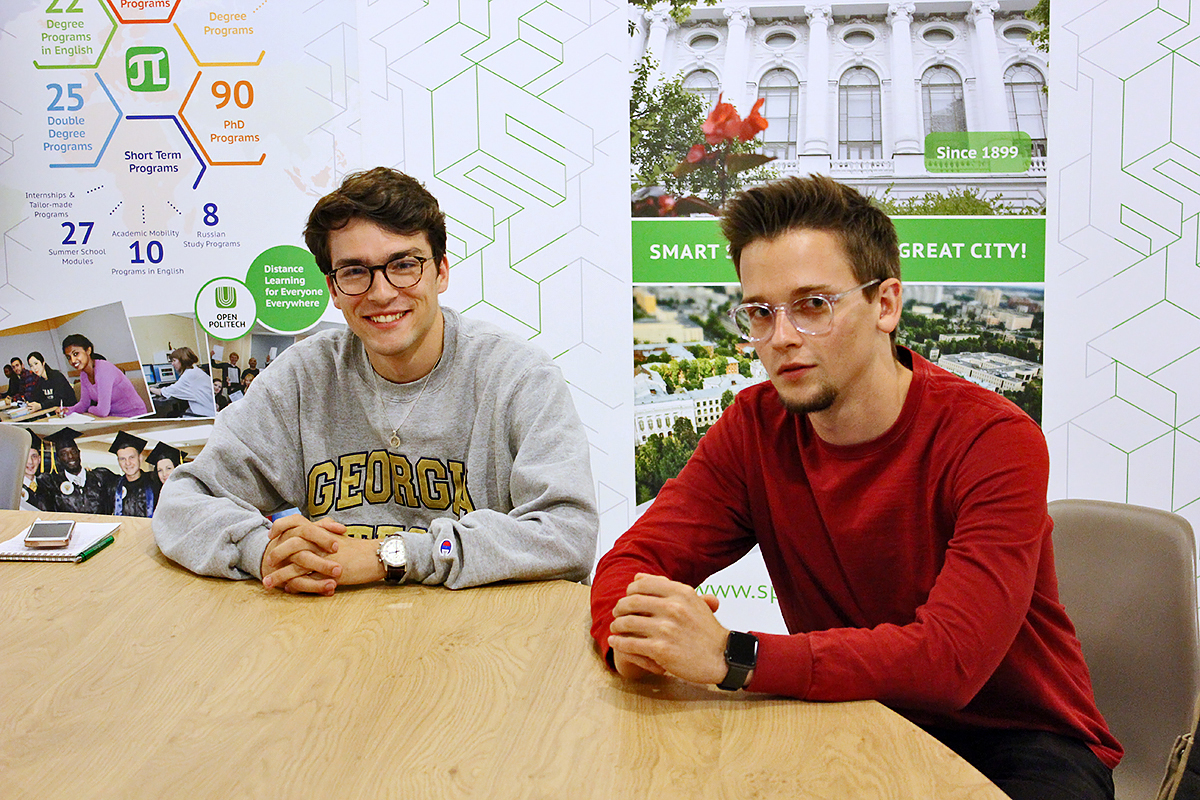 - Connor, Daniel, we are glad to see you! Could you please tell us about the interesting things that have happened this month? Did you enjoy living in Russia?

Connor: This really was an unbelievable experience. Up until now, getting out of my apartment, I keep thinking, “Could it be that I really am in Russia? I could never have expected that I would have such an opportunity!” It was rather worried to leave my country for so long and to go so far away, but when the hosting family greeted me with such warmth, all my scares and concerns just went away. I liked living and studying here, while constant communication with my new acquaintances and intensive studies gave me perfect language training. This month has practically changed my life, and for the better, of course.

Daniel: Living in Russia, I was feeling myself at home. We sometimes speak Russian at home because my mother and grandmother are Russian. My major goals for this month were to learn more about special features of the Russian language and improve my command of Russian. And I am fully satisfied with the results. Speaking of living in Russia, I completely agree with Connor: this month gave me absolutely unique experience which I am very thankful for.

- Were there any moments that surprised you or seemed quite unusual?

Connor: I guess this was food. I know there are restaurants of Russian cuisine in America, but I have never been to any of those. Here I’ve tried many new dishes. Luckily, the taste of most of them I liked.

Daniel: I would have never expected that Moscow would impress me more than St. Petersburg. Everybody keeps saying that St. Petersburg is the cultural capital of Russia, its cultural center; no doubt, its architecture and its style are magnificent. However, the spirit of Moscow is much closer to me: it reminded me of New York where I am from.

- But there are lots of interesting things in St. Petersburg, aren’t they?

Connor: Absolutely! I had been walking around the city for hours, scrutinizing the places of interest and trying to get the most of this month in Russia. St. Petersburg brings together unique things: the ancientness, culture, and modern trends. I fell in love with the heart of your city: Nevski Avenue.

Daniel: I would like to add that I very much enjoyed public transportation. The transportation network in St. Petersburg is very well developed: you can quickly get to any place in the city and, what is essential, it isn’t expensive. As far as tourist attractions are concerned, my strongest impression was Palace Square.

- And what would you advise to visit other foreign students coming to St. Petersburg?

Connor: First of all, I would recommend to start with the traditional tourist route: the Hermitage, Russian Museum, a trip to Peterhof. However, I have also liked less popular places, often known only to the locals. For example, you can find lots of cafés, restaurants, and shops in Sredni Avenue of Basil Island (Vasileostrovskaya metro station), which is a lot less crowded as compared to Nevski.

Daniel: I agree that not to visit the major city attractions would have been a huge mistake. But after you will have got more or less acquainted with the city, make sure to ask local residents about other places of interest. For instance, I was advised to visit the flea market in Udelnaya; as it turned out, it belongs to the top ten flea markets in the world, right along with the markets of Tokyo, Paris, London, and Amsterdam.

- Would you advise tourists and foreign students to learn a little bit of Russian before coming to Russia? ?

Connor: Of course I would advise to learn the basics of the Russian language; however, to a big extent it depends on the region you are going to. Notably, it would be a lot easier for English-speaking tourists to get around in St. Petersburg rather than in Moscow: this city has mush more signs and directions in English.

Daniel: If you are planning to stay in Russia for a longer period, than you should better learn at least the basics of Russian. Otherwise, you will have to stay in the center of St. Petersburg where there always are lots of tourists (laughing).

- Did you have any communication problems during this month in Russia?

Connor: My problem was my limited word stock; some things were difficult to understand. In particular, this concerned conversational phrases and terminology. However, people were always trying to help me, and, what I am especially thankful for, were patiently waiting until I would formulate my sentence in Russian without “switching” into English.

Daniel: I had no communication problems whatsoever; the difficulties I had were caused only by my knowledge of the Russian language. I was afraid to say something wrong, to make a mistake in a word or a sentence. However, it is important to understand that mistakes are a part of the educational process, and no progress is possible without them. Teachers’ assistance and support were helping us to move forward.

- Please tell us what would you remember in the intensive course on the Russian language most of all?

Connor: Class studies in my group were primarily focused on syntax and grammar, usage of verbs in particular. This was very useful and helpful.

Daniel: I would like to single out the lessons in which we discussed the events that were taking place in present Russia. It was very interesting to hear a variety of opinions and ideas.

- In your opinion, how much have you improved your knowledge of Russian?

Connor: I am now speaking Russian a lot more confidently. Back home, I will continue my intensive language practice. Thanks to the International Polytechnic Summer School, I could see the issues I should be working on to improve my Russian.

Daniel: I was very glad to take part in the intensive Russian language course, and I would be happy to speak Russian with my relatives. And, of course, I would love to come back to Russia not once.

- Would you advise your fellow students to take part in the International Polytechnic Summer School?

Connor: Absolutely! I would recommend anybody interested in getting to a new level of Russian language command to take part in this intensive program.

- Connor, Daniel, thank you so much for your interesting interview! We wish you all the success in learning the Russian language!