In the framework of the Polytech Days in Berlin 2020, on top of a rich business program, a very important event took place. It was organized specifically for those who studied at Polytechnic University over the years but live abroad but misses the alma mater. The meeting in Berlin provided a unique opportunity to communicate with Polytechnic graduates from more than 20 countries; no translation was needed. The organizers are sure that the European Alumni Forum has become a very good sign of Polytechnic University’s willingness for dialogue and cooperation with the countries of these graduates and the whole world. 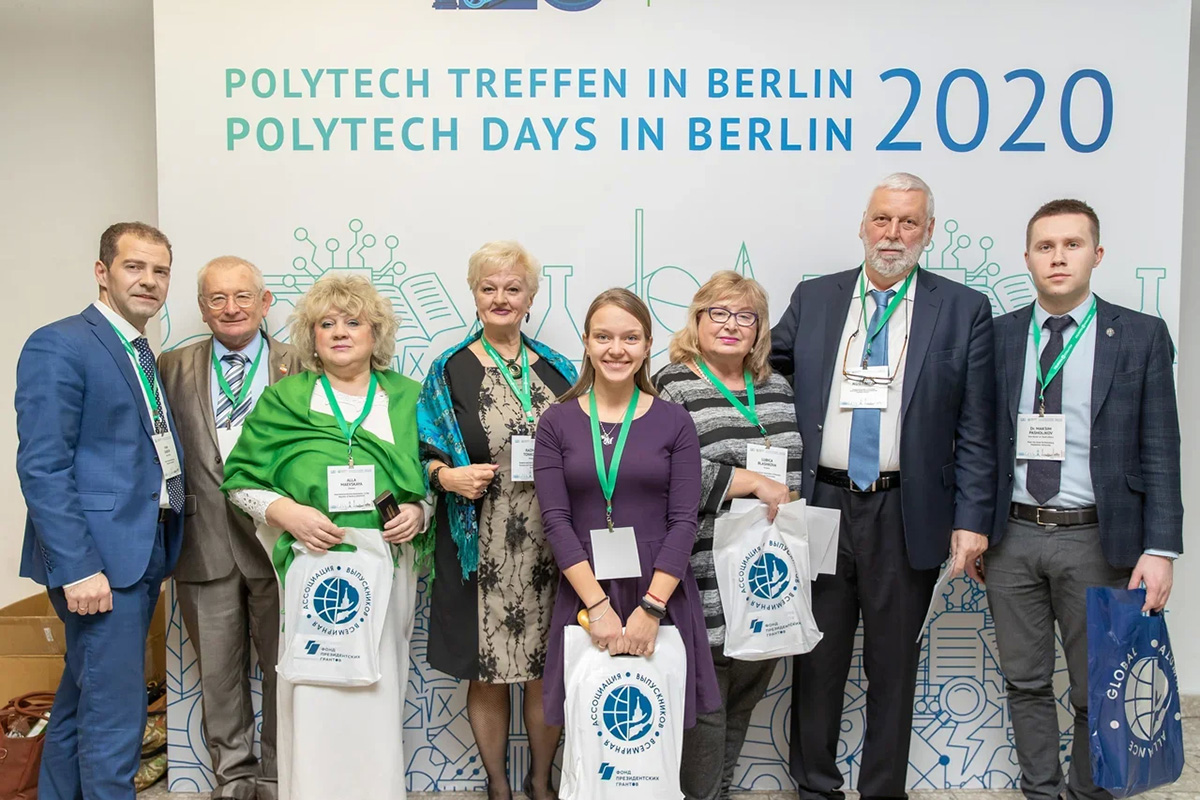 The geography of the forum participants is truly impressive. Polytechnic graduates of many years from Germany, France, Great Britain, Spain, Switzerland, the Netherlands, Austria, Poland, Estonia, Bulgaria, Greece, Serbia, Georgia, Morocco and Mali gathered at the Russian House of Science and Culture in Berlin to meet and remember their years of study at Polytechnic University and exchange their views.

The forum began with a grand opening ceremony, although held in a relaxed atmosphere. Video greetings from the university administration - academicians VASILIYEV and FEDOROV and words of welcome from vice-rectors for scientific, economic work and youth policy of SPbPU Vitaliy SERGEYEV, Mikhail GREKOV and Maxim PASHOLIKOV, and the Acting Director of the SPbPU Higher School of Creative Industry and Design Aleksandr KOBYSHEV. 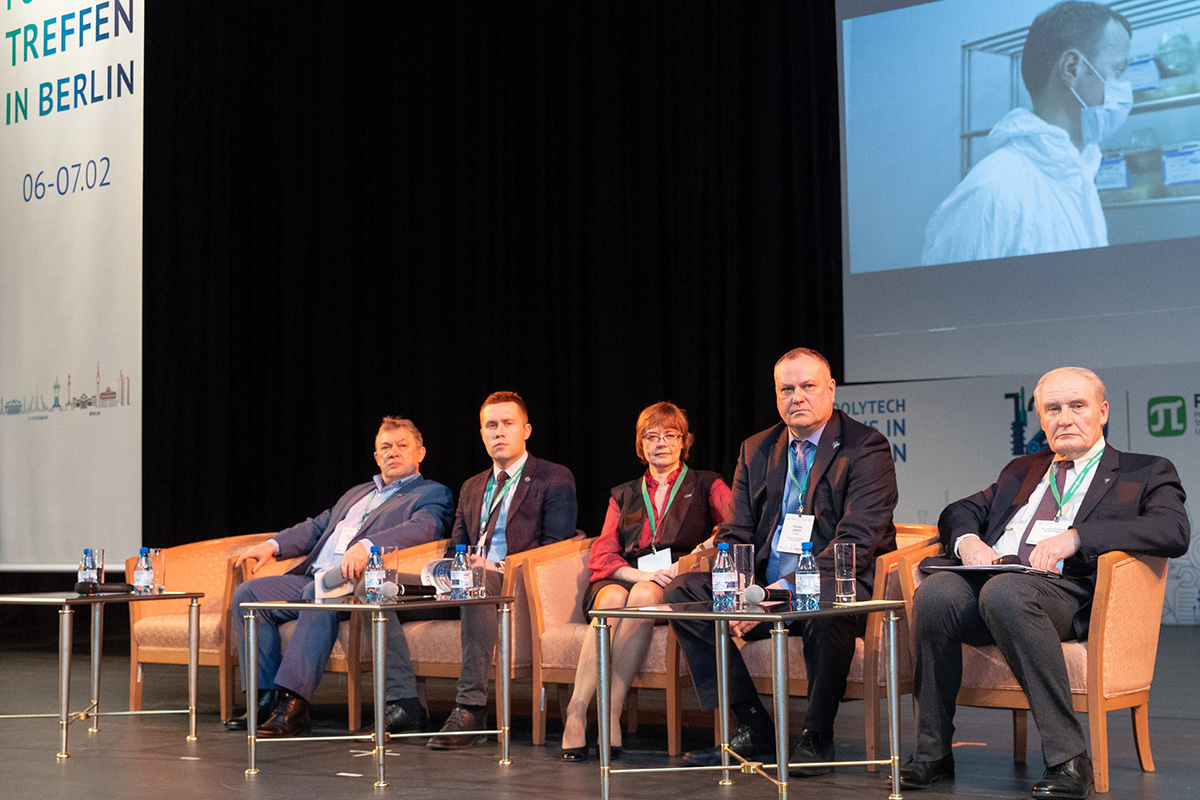 “The connections that arose at Polytechnic University remain for life,” Vitaliy SERGEYEV addressed the audience. “We recognize those with whom we studied as our family, where everyone brings something into the life of another, and where the sense of unity remains forever, and topics for conversation always exist.” The Vice-Rector for Research thanked everyone who came to the European Alumni Forum, noting that the university made its best to make the meeting as interesting and useful as possible. 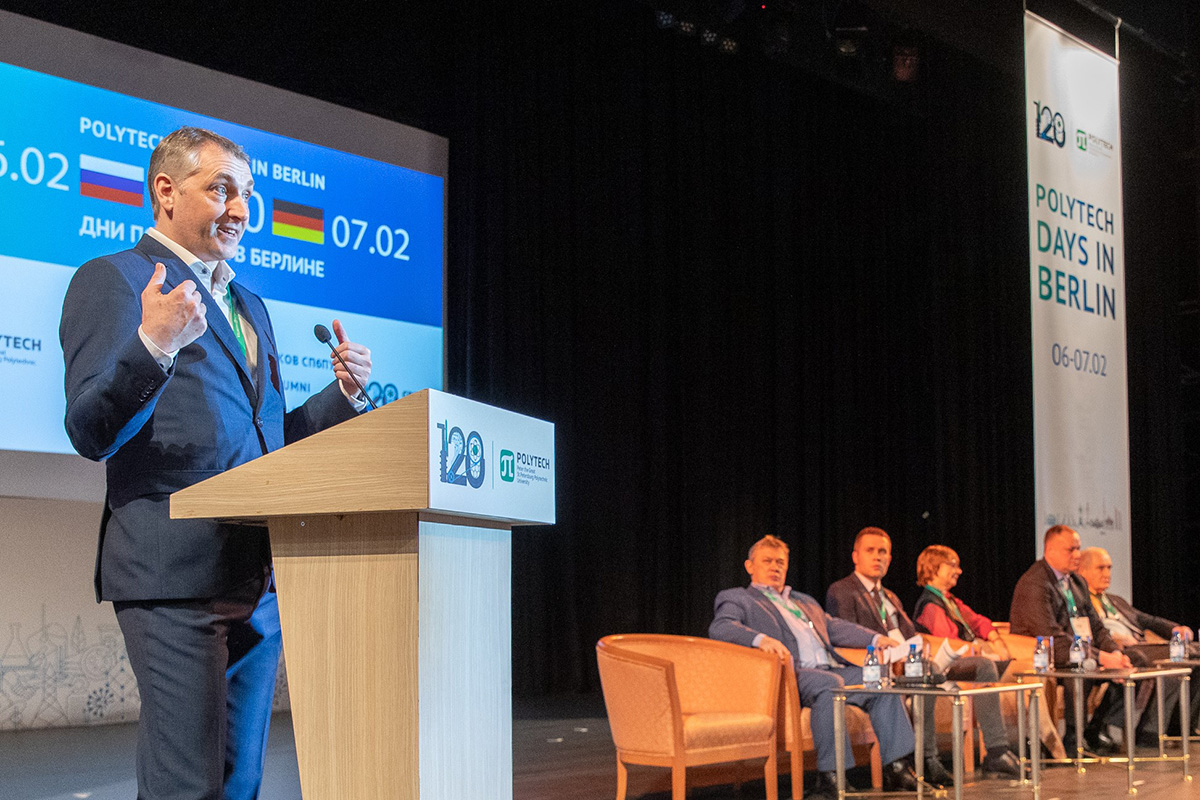 The youngest of all Polytechnic vice rectors, Maxim PASHOLIKOV welcomed the audience on behalf of the “controversial and extraordinary young people of the new generation.” He spoke about the traditions of Polytechnic University: the student team movement, which today has become even larger than in Soviet times, patriotic and sports work, youth engineering creativity, and assured that Polytechnic University is maintaining the vital spirit of the university. “Polytechnic University is developing, and students always have an example of moving forward,” the Vice-Rector for Youth Affairs expressed his confidence. “And every graduate has contributed to making the university of today exactly what it is.” 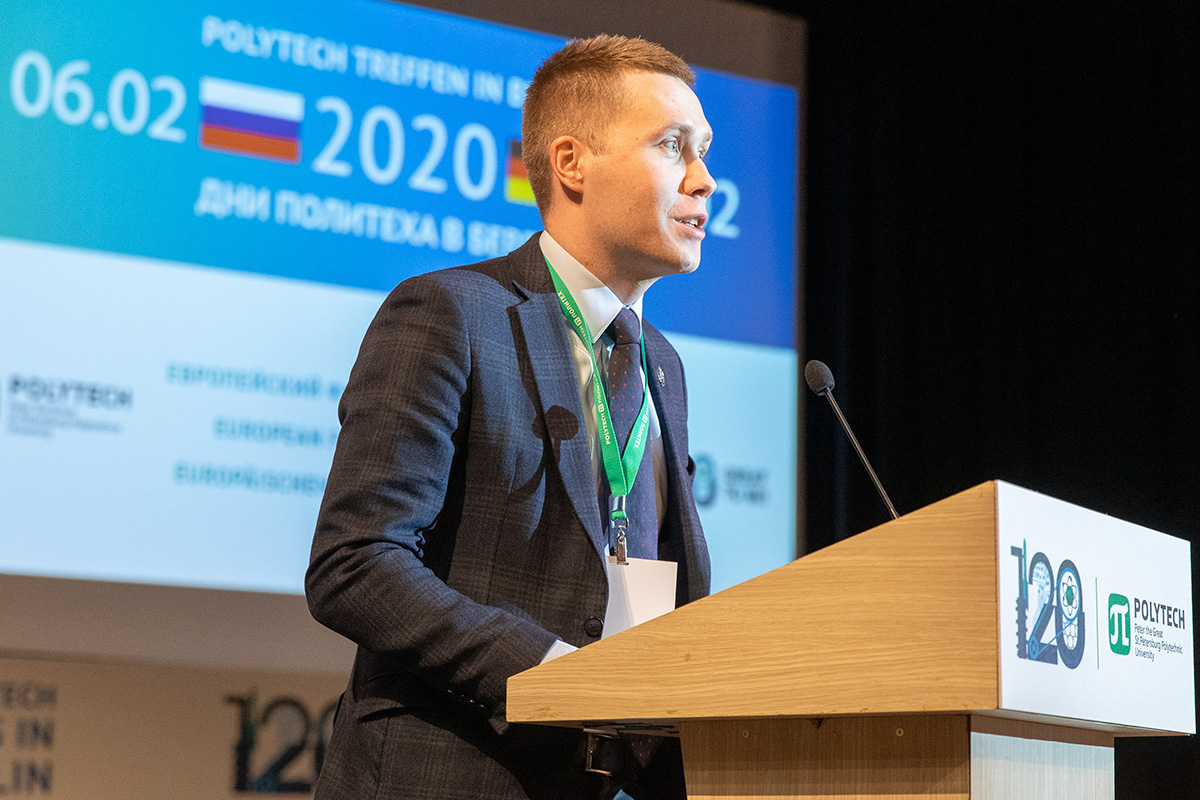 Speaking about the benefits and the need to work with graduates, which is becoming a lot more systematic, Maxim PASHOLIKOV introduced the Director of the SPbPU Fundraising Center and Alumni Office Ivan BABKIN. Everyone who studied at Polytechnic University was recommended to contact this structure for any questions related to re-establishing contacts with the alma mater and finding their classmates. “The main result of the university’s work is its successful and grateful graduates,” said Ivan Babkin. “And this is a very constructive activity in all respects, because we help graduates to organize and use their professional and social ties, find the right people and develop contacts”. 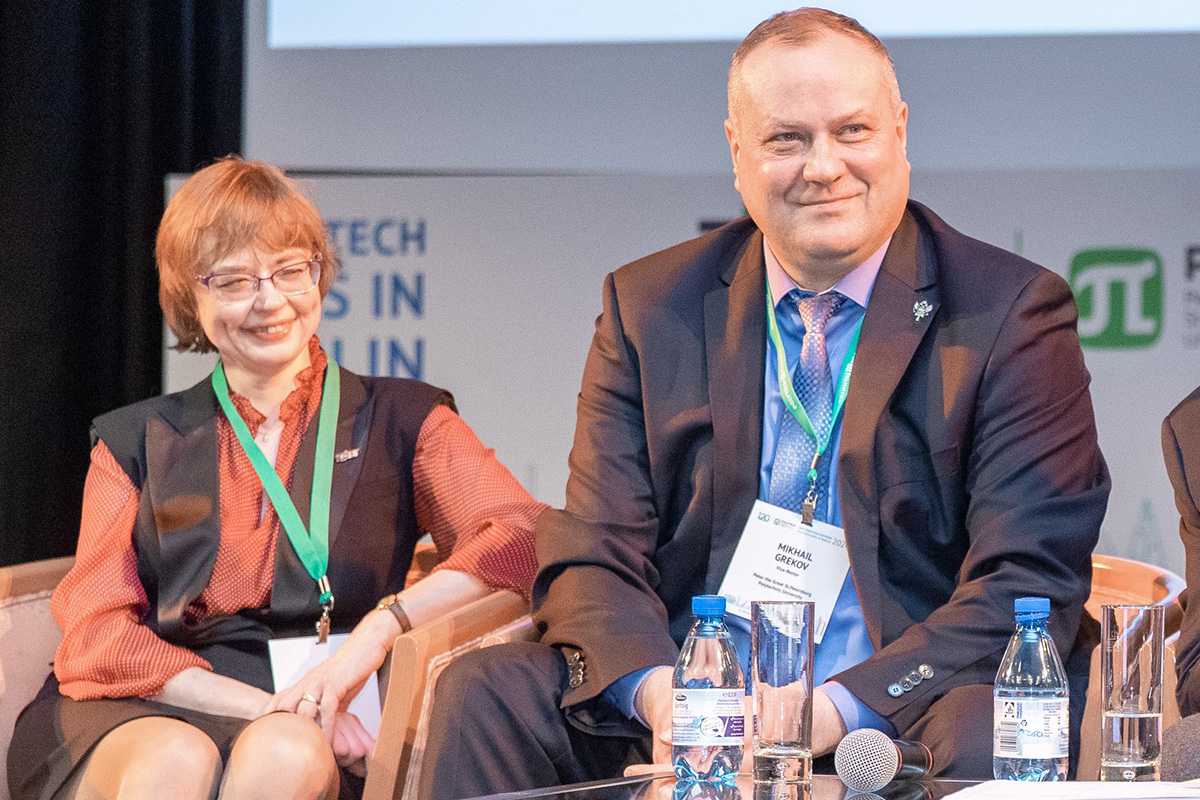 Vice Rector for General Services Mikhail GREKOV not only talked about how the university has transformed and expanded its property complex over the past 10 years, but also acted in a slightly different role - as a graduate of the legendary PhysMech and one of the patriarchs of the Polytechnic graduates community as a whole. “PhysMech is the best,” repeated another graduate of this faculty, and now professor at the Institute of Applied Mathematics and Mechanics, Natalya ERMAKOVA. - We love PhysMech and its graduates, because there were no outsiders here but only people gifted in the sciences and in other areas. We were taught not just to follow algorithms, the well-known paths, but to seek for independent solutions to problems, and how to set the top-level tasks on our own.” Representatives of other faculties did not lag behind either: Professor Alexander ASHEULOV, who coordinates work with the Mechmash graduates of various generations (and the annual musical “Winter Mehmash nights” became the crown of this work), and hydraulic engineers, and electro-mechanics engineers. 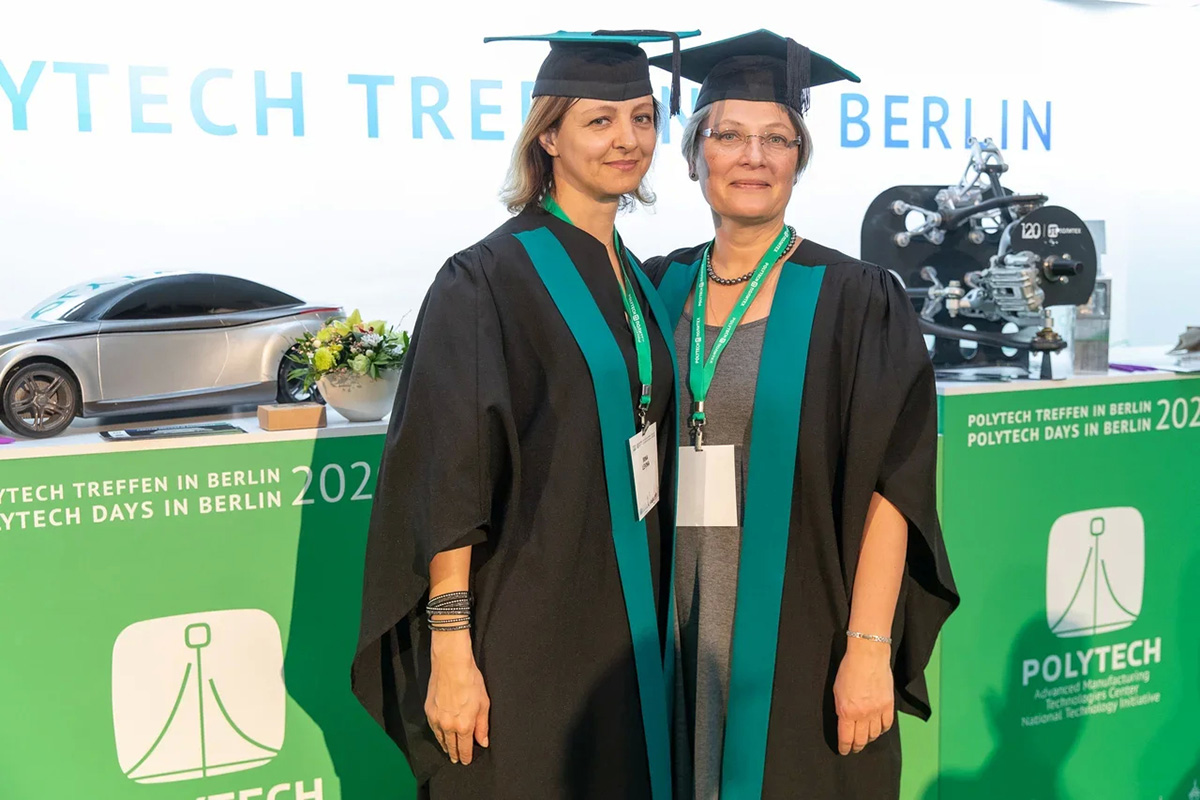 But the main characters in the forum, of course, were foreign graduates of Polytechnic University. All of them are successfully certified specialists who today hold important positions and effectively apply in their native countries the knowledge acquired in Russia. Among them are the Honorary Consul General of the Russian Federation in Agadir, Morocco, Mr. Abdellatif ABID. He studied at Polytechnic Institute at the Electromechanical Faculty and in 1983 ahead-of-schedule defended his graduation project. “Without studying at Polytechnic Institute, I would not have been what I am,” Mr. ABID said. “I think many here will join my gratitude to Russia, to my beloved Polytechnic Institute, to teachers for all our professional achievements, for the invaluable assistance in the development of other countries, the training of sought-after specialists, as well as for the good friendly attitude towards foreign students. Indeed, many of them, who have received an education and have long and successfully worked in their countries, consider Russia their second homeland.” 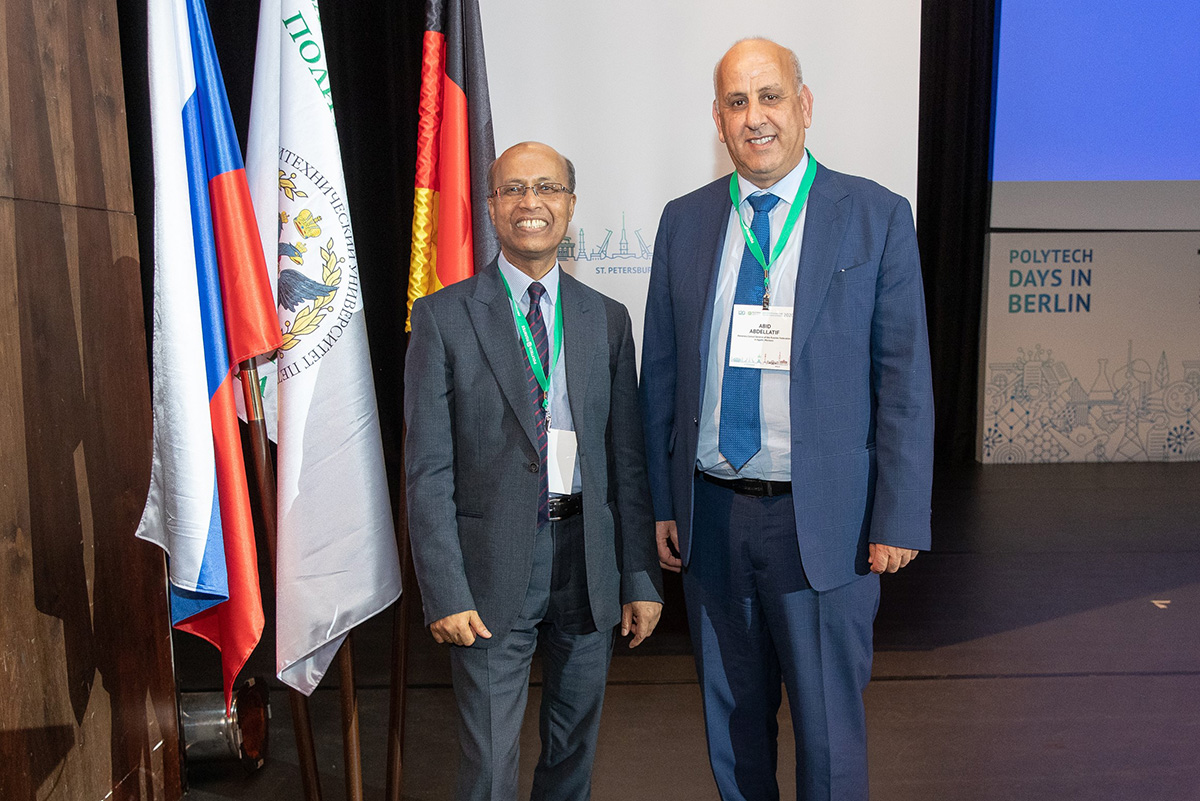 The fact that Polytechnic University not only made it possible to master strong knowledge, but also left the deepest feelings and memories of student time, Sanovar KHAN, professor at City University of London described in his speech. He graduated with honors from the Electromechanical Faculty, and then from the postgraduate school of Polytechnic University. Mr. KHAN said that he lives and works in the capital of Great Britain, and for the last 10 years he has been visiting Polytechnic University every year as a visiting professor. “I have close ties with Polytechnic University,” says Sanovar KHAN. “We are connected with classmates in social networks, we discuss both scientific issues and the results of football games. We love you all very much, be it PhysMech or Mehmash, but, of course, we love you most if you are Electromech. We do care about what happens to Polytechnic University. We are very happy when new buildings are built, scientific discoveries or something in student life occur. Graduates are a big family. And although members of this family live in different places, they have some invisible connections; we feel each other and rejoice when we see each other. I am glad that there is a department for working with graduates, and I often receive an email from them that there is a concert in the White Hall, and they invite me.” 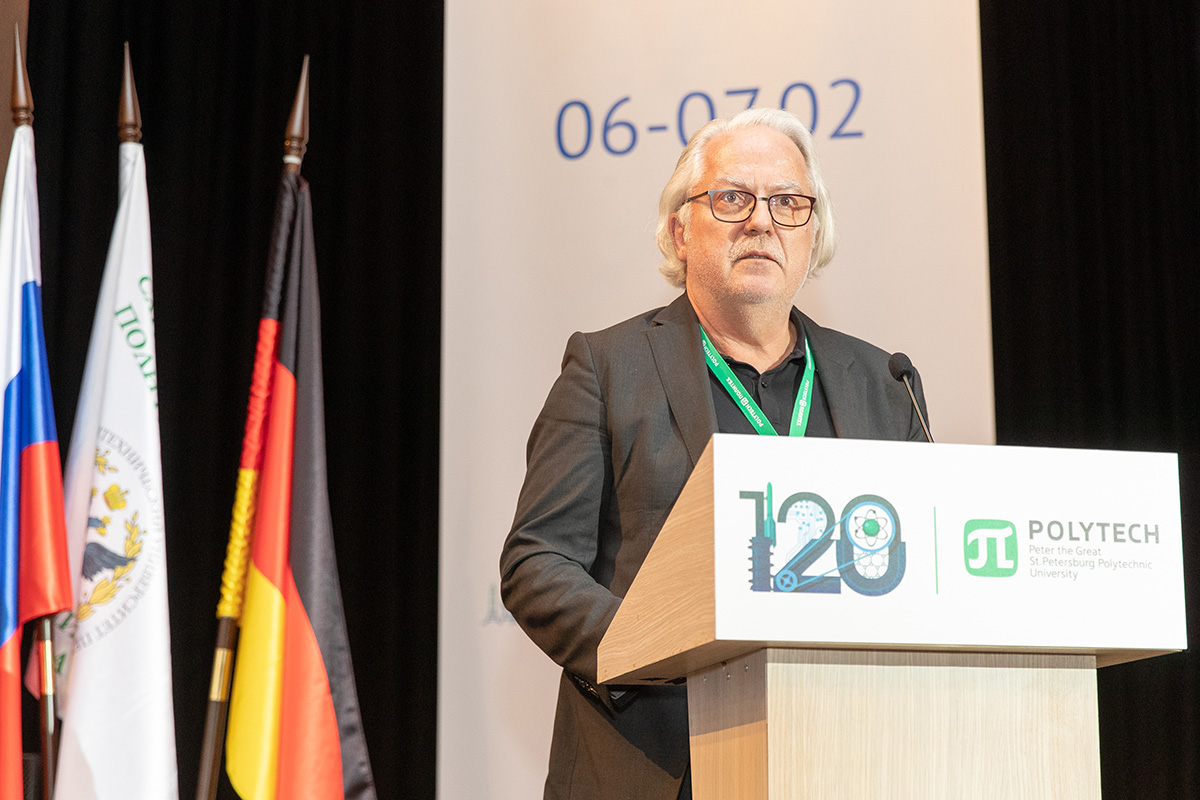 The forum guests were also welcomed by Mr. Holm ALTENBACH, who studied with us at PhysMech, and today, being a recognized expert in the field of mechanics of materials and structures, he works at Otto-von-Guericke-Universität Magdeburg. Another guest from Poland, Franciszek SWITALA, said that he was proud to be a graduate student of the Leningrad Polytechnic Institute, never forgets these years, and always has a photo of Polytechnic Institute with him. Mr. SVITALA was present both at the 100th anniversary of Polytechnic University and at other anniversaries, and before the 120th anniversary he took a search in Poland and brought to the celebrations a 1956 graduate, who visited the institute the first time since then! 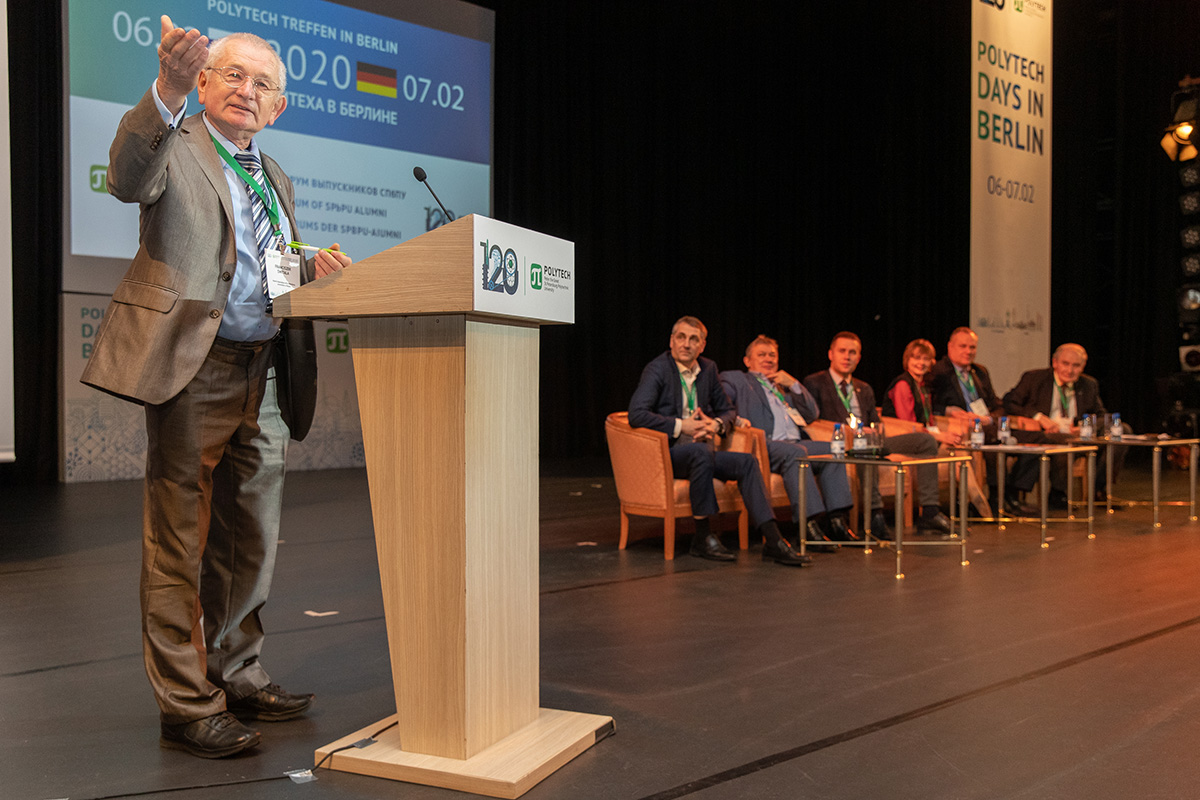 All foreign graduates of Polytechnic University admitted that they learned with great pleasure about the upcoming forum in Berlin and wholeheartedly welcomed this initiative. Graduates spoke about the fact that studying in Russia was one of the most interesting periods in the biography of each of them and played an important role in their personal development during the “our kind of guy” networking session. 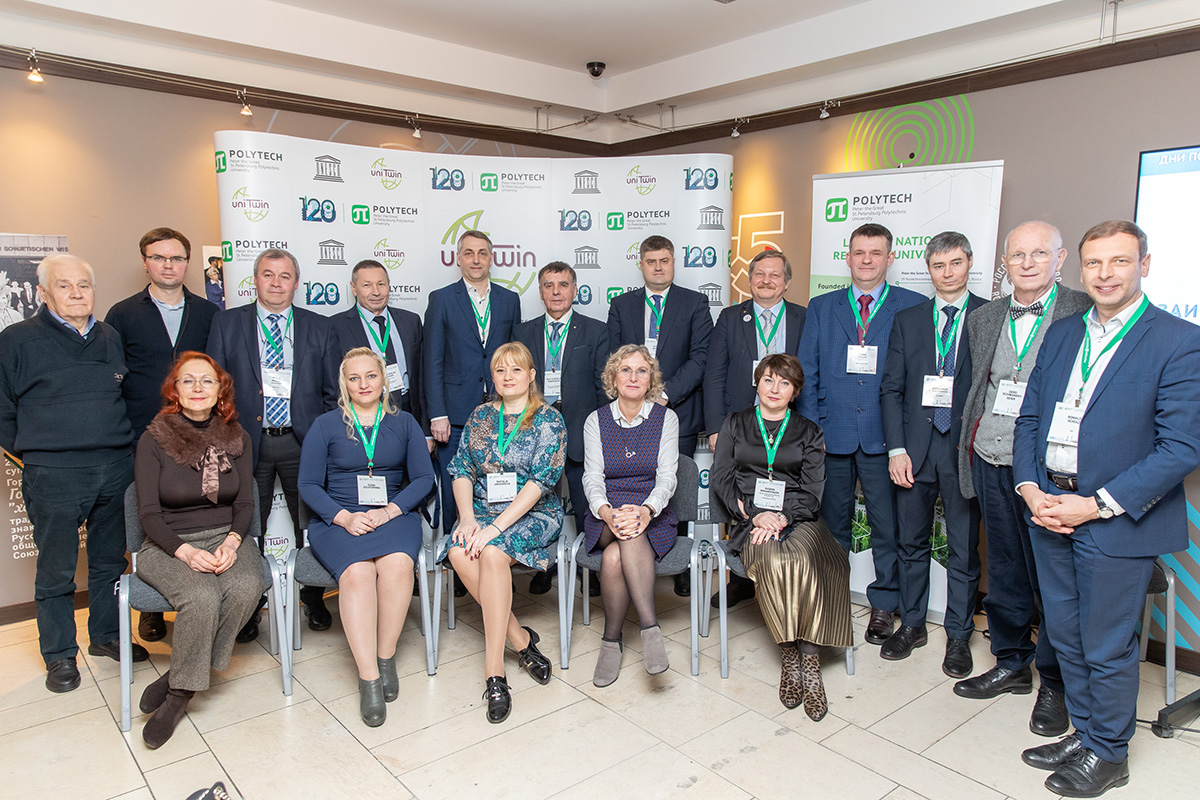 During the business part of the forum, the participants met with the leaders of European alumni associations and discussed the role of graduates in the activities of the university (moderator: Vladimir CHETIY). The round table with graduates of the Presidential program for managerial training was moderated by SPbPU professor Vladislav RASKOVALOV. Guests also attended a lecture by Vitaly MAISEL on the role of Polytechnic University in the history of Europe and the world. Vitaly MAISEL is a graduate of Electromech. Perhaps because he was a third-generation Polytechnic graduate himself, and the topic was very close to him, he gave his lecture in the one breath: the lecture was not only interesting and informative, but also so emotional that many could not hold back the tears. 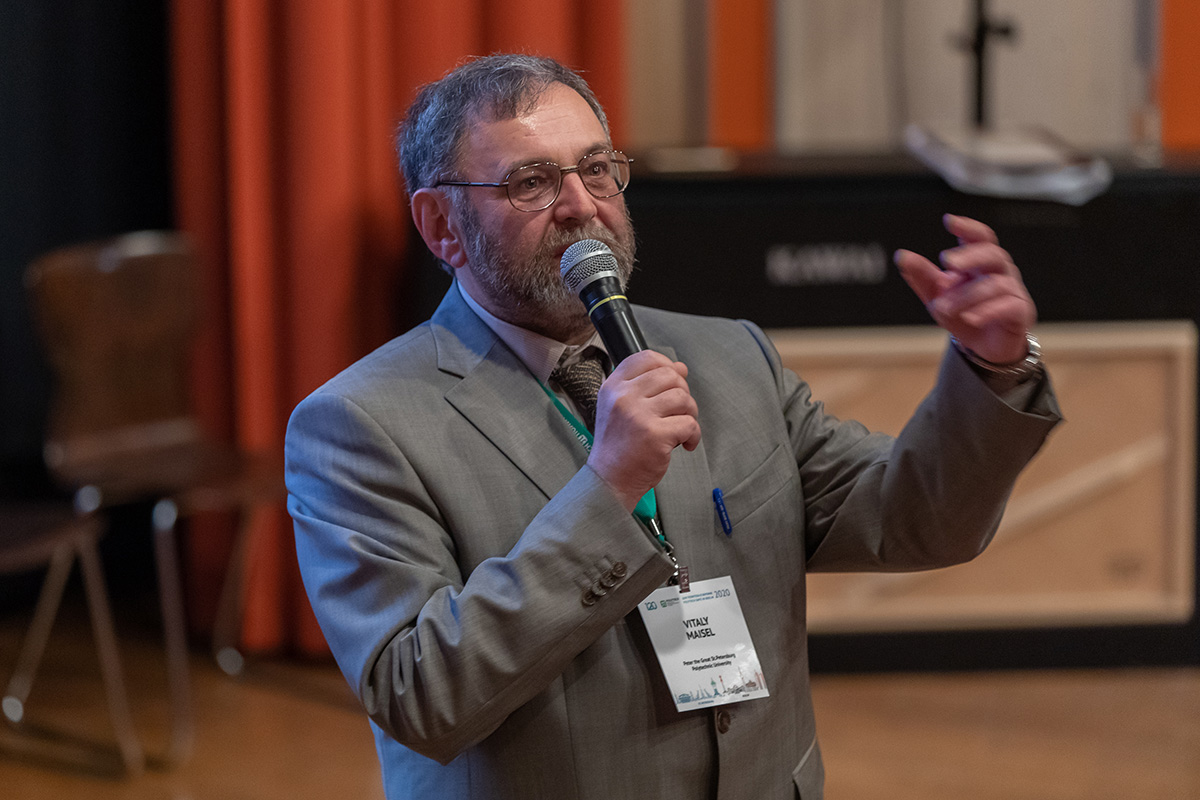 Those interested took part in the team game for general erudition: “re-passed” exams in mathematics, physics, the history of Polytechnic Institute and the Russian language, visited the art exhibition member of Alexander DUDOROV, member of the Artists’ Union of Russia and a graduate of SPbPU; tested their strength in a simultaneous game with an SPbPU student, FIDE Master Pavel MARTYNOV, attended the presentation of Vitaly MAISEL’s book of Polytechnic Songs. Interactive and photo zones worked throughout the forum. Well, the bright and dynamic musical accompaniment of the forum was provided by the musical group of graduates of Polytechnic University under the name “PISK”. 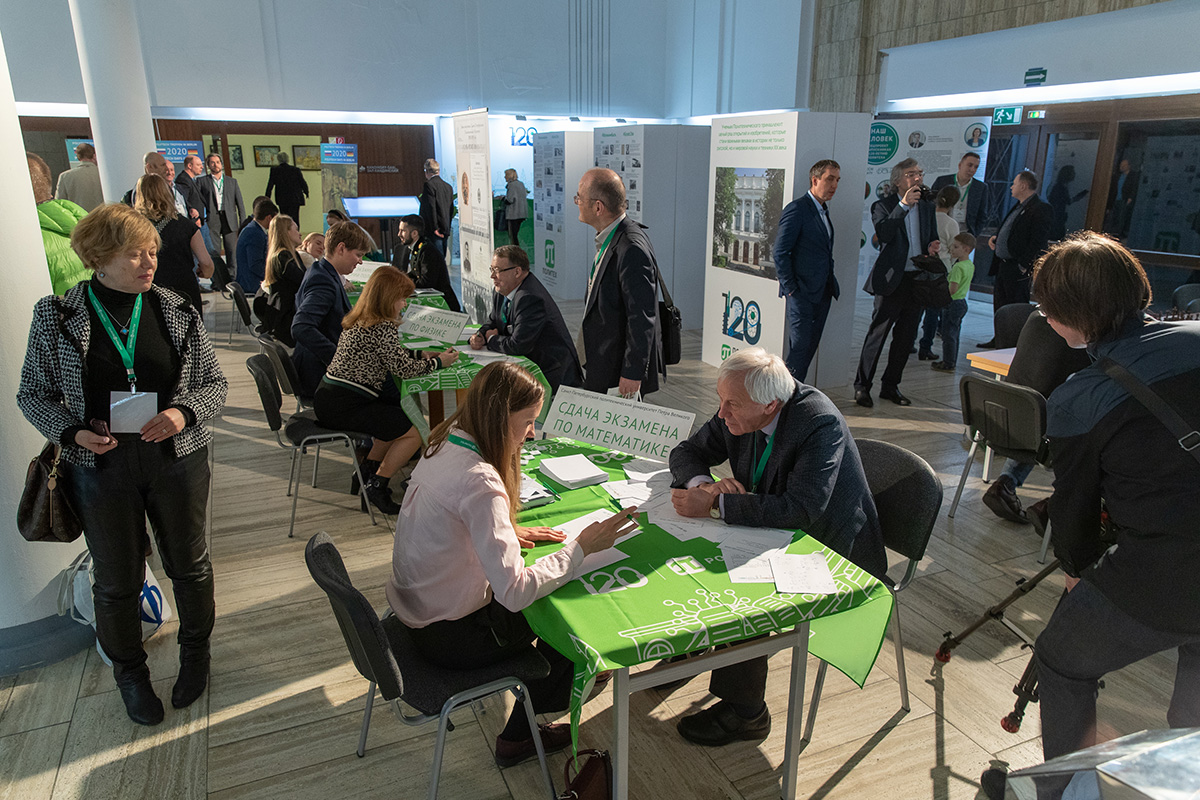 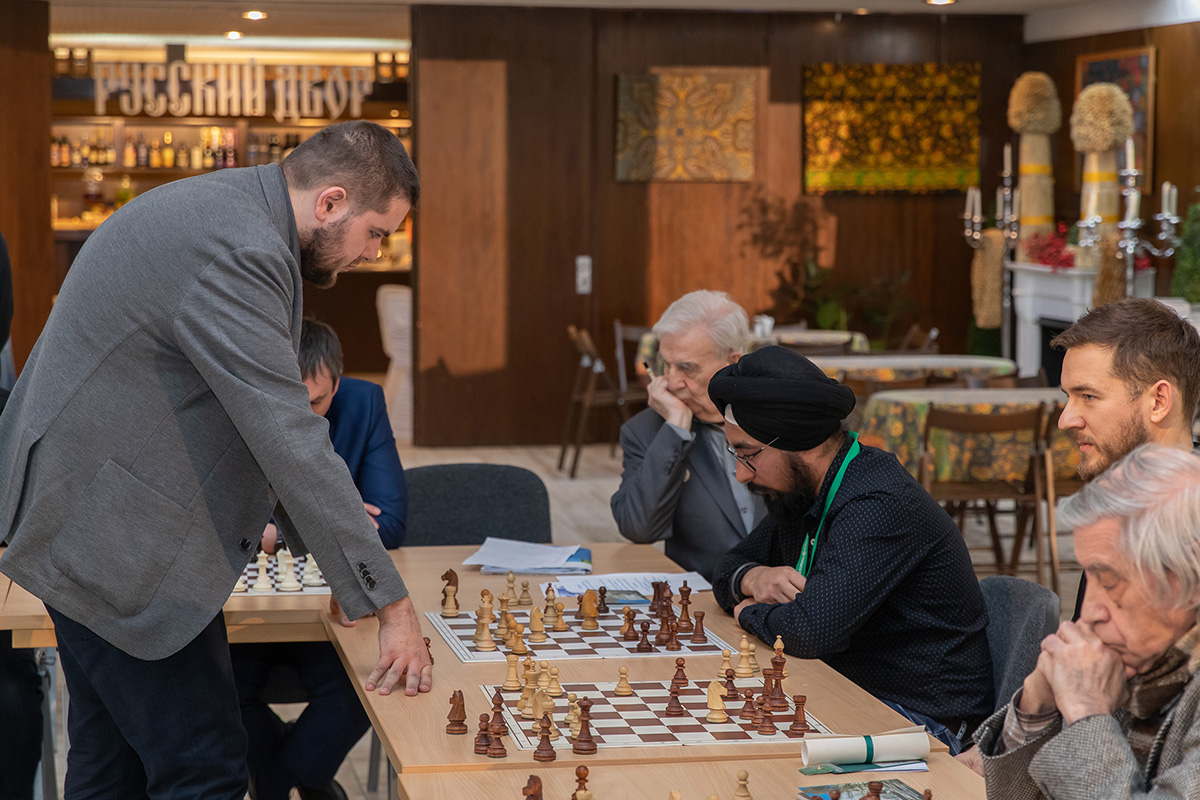 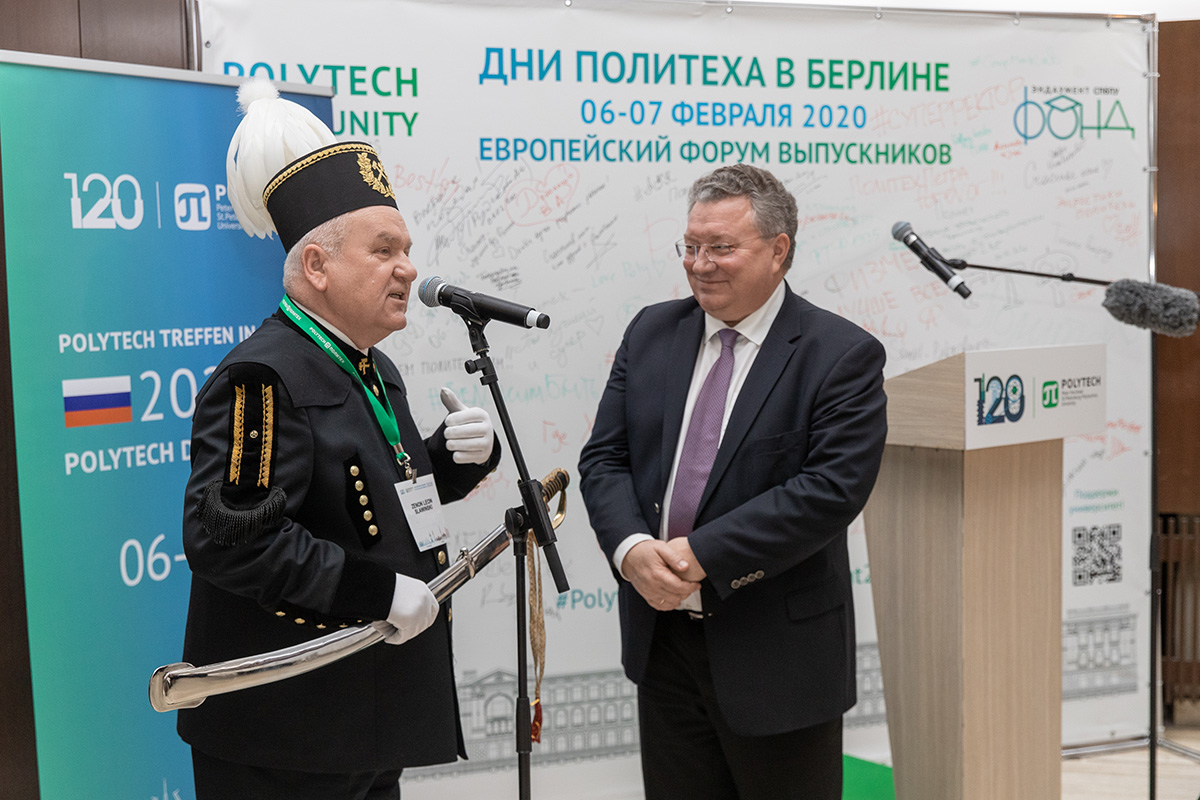 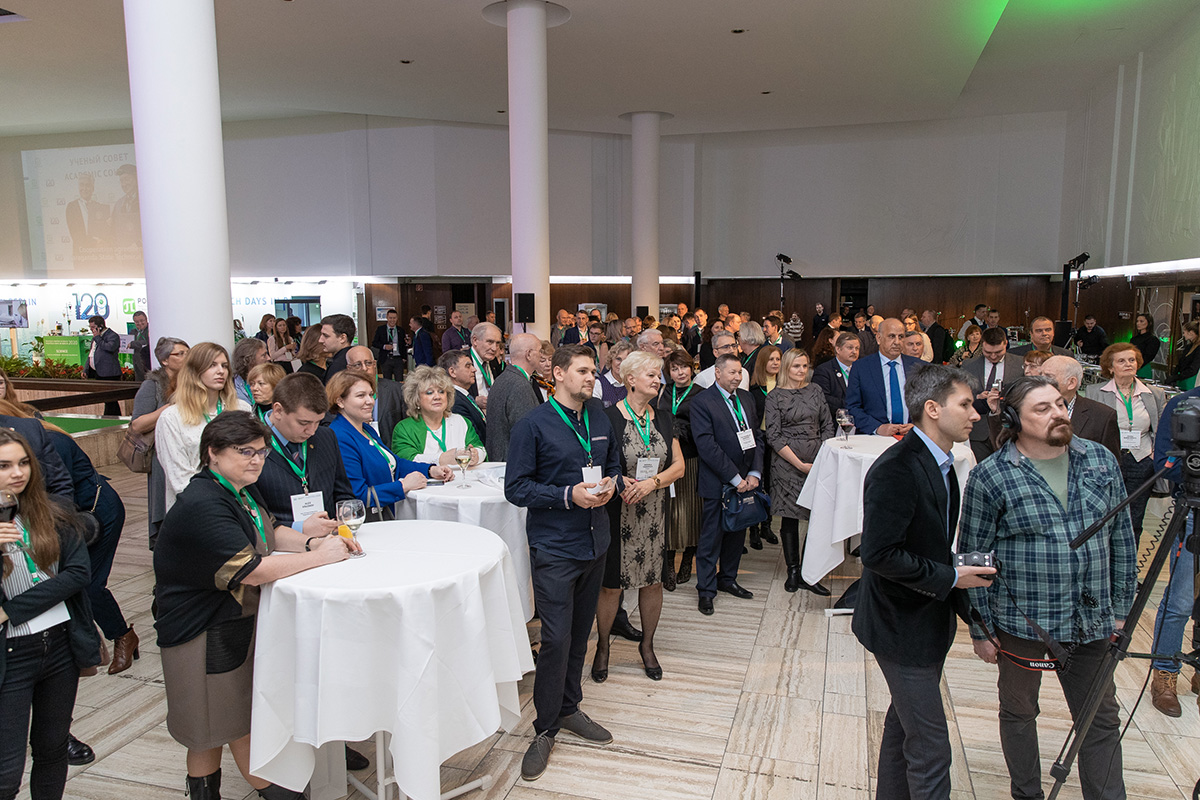 Vladimir CHETIY, Chairman of the World Alumni Association, with whose assistance the forum was held, noted that its holding was a good evidence of the great attention paid to deepening contacts with foreign graduates at Polytechnic University, which ultimately contributes to effective scientific, technical and economic cooperation, widespread immense Russian culture and the great Russian language throughout the world.