For any university, a large international event not only is a great advantage but also a huge responsibility: such an event is an icon of the university and presents its achievements and the development level to the foreign community. the two-day forum named “Polytech Days in Berlin” was exactly such kind of event where foreign partners could obtain a full overview of SPbPU. 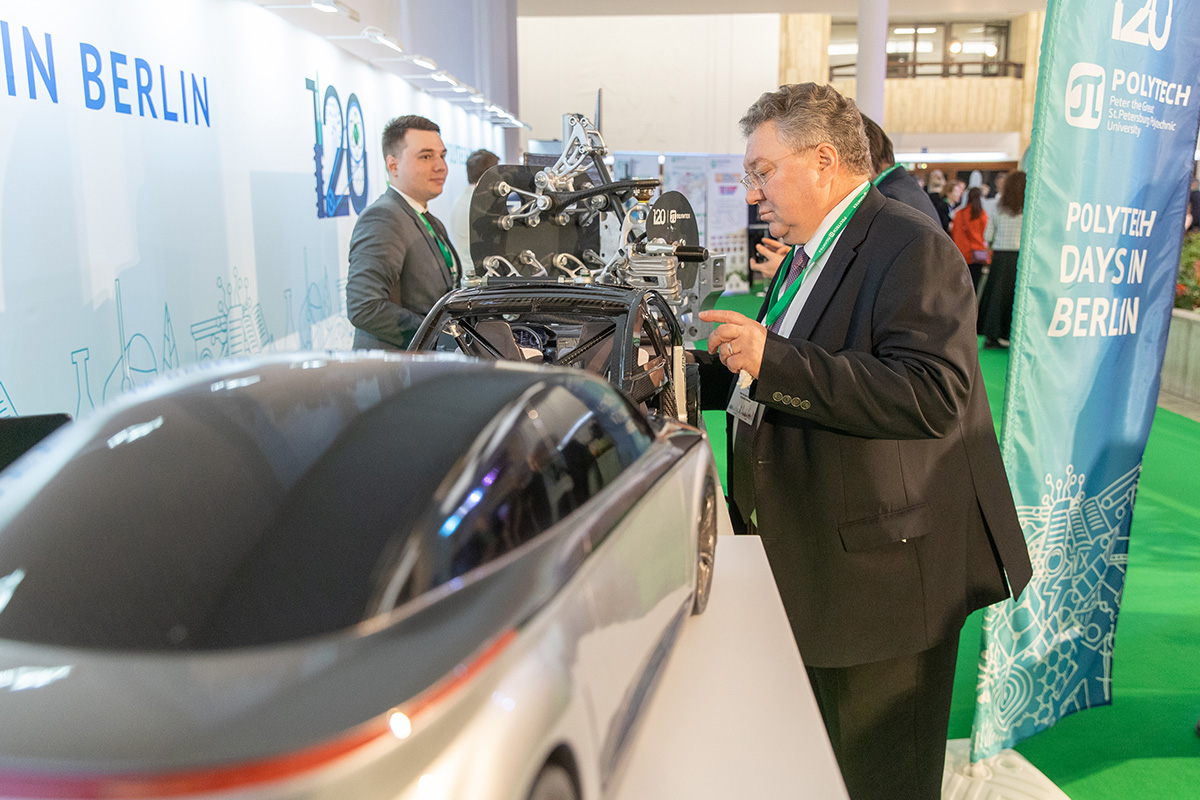 The forum ended a week ago, but it is hard to assess an event that has just ended: it takes time to understand how good the idea and the scope of the event were. A large-scale forum in the heart of Europe was a bright finale in a series of events dedicated to the 120th anniversary of SPbPU. The Polytech Days in Berlin were a great opportunity to present the results of the university’s scientific, engineering and innovative activities; draw attention to the brand and strengthen the reputation of the university; speak out our advantages and opportunities; find new partners and, of course, in a friendly manner communicate with long-term partners. 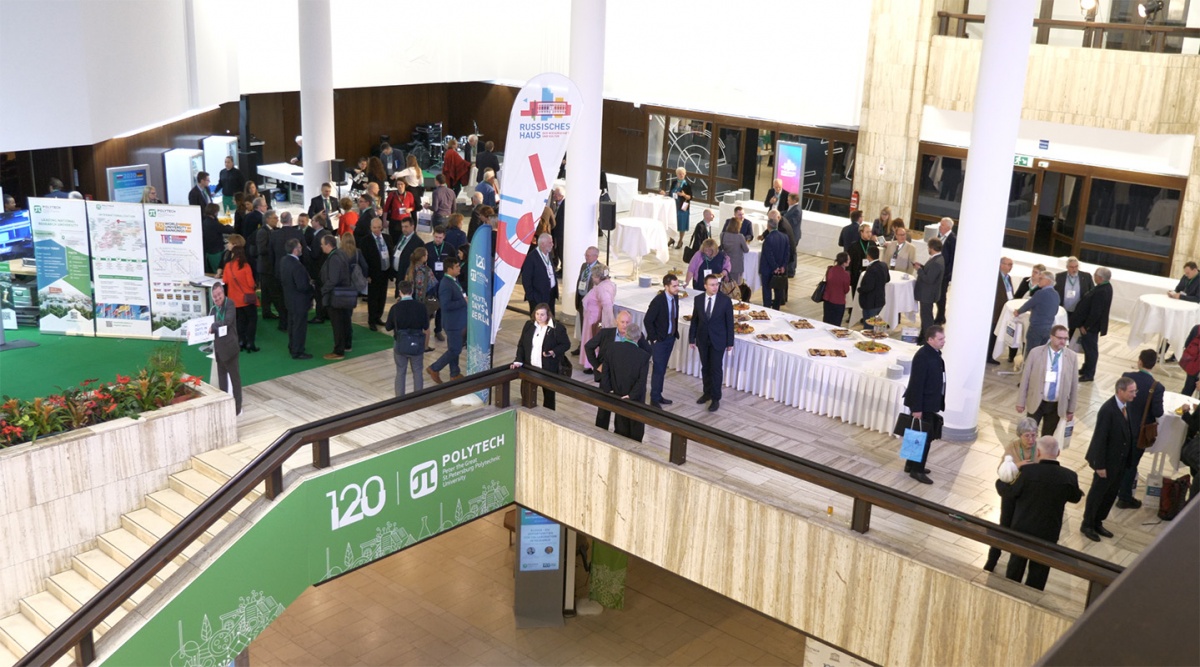 One of the success-cases of such cooperation is SIEMENS. “Strong bonds of friendship with Rector RUDSKOI, Vice-Rector ARSENIEV, researchers and teachers link me with Polytechnic University," said Martin GITZELS, Vice President of Siemens in Russia. “I’ve lived in Russia for 15 years, and all this time, we have been intensively working with Polytechnic University. We appreciate the high level of education at this university and, of course, the scientific research carried out by specialists on topics of interest for our company.”  In his opinion, Polytechnic University is particularly strong in developments in the field of the digital transformation of the industry. “Professor BOROVKOV is a leader in this field at Polytechnic University and in Russia. He is engaged in ‘digital factories’ and the creation of ‘digital doubles,’ which is a very urgent topic,” continued Mr. GITZELS. “For several years, our company has supported SPbPU students: they work on projects and receive scholarships from us. We have opened a joint laboratory of Industrial Systems of Artificial Intelligence. We plan to strengthen and expand our cooperation with Russia and Polytechnic University in particular”. 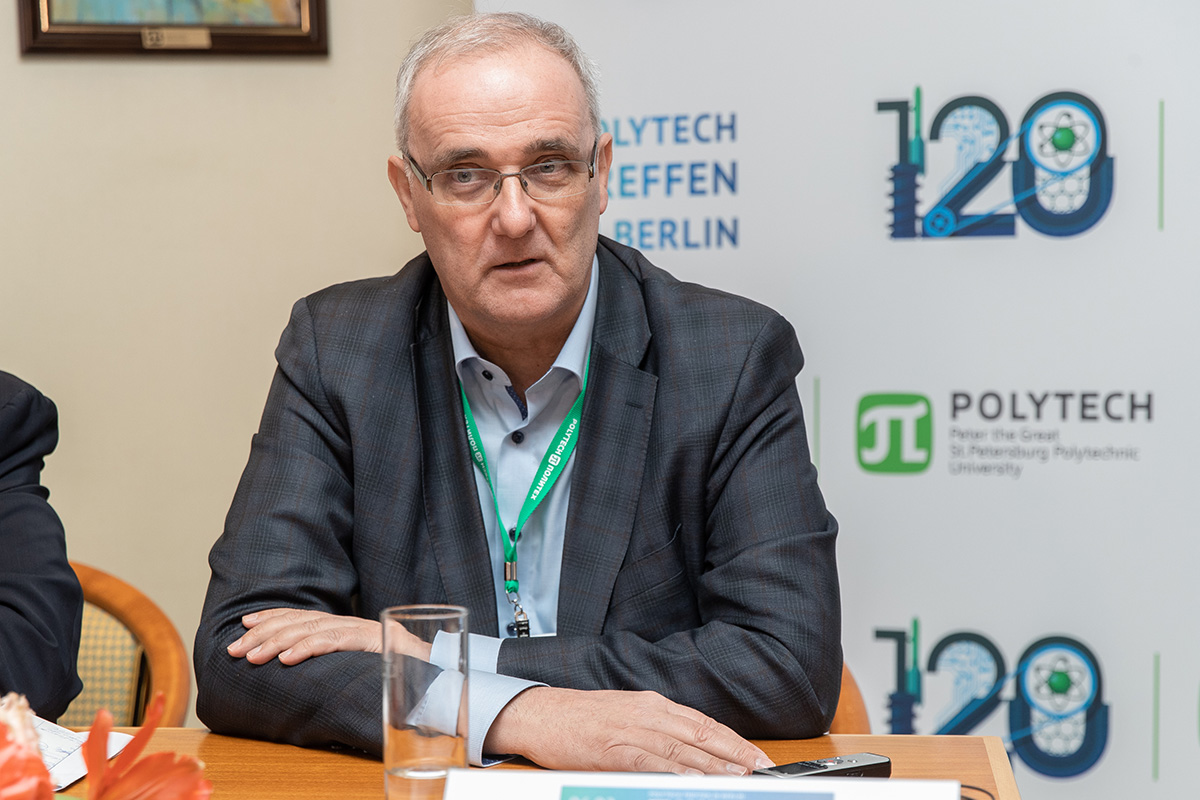 Obviously, an event of this magnitude could not be organized and held by forces of just one university department. Many university services, including the international, scientific and educational ones, the NTI SPbPU Center, the Departments of Branding and Congress and Exhibition Activities, SPbPU Fundraising Center and Alumni Office, the directorates of the institutes, they all contributed to that and started their joint efforts long before the forum dates. For example, just the delivery of the exhibits and technical equipment to Berlin required a 25-ton truck! To demonstrate university developments, conduct negotiations, lectures, round tables, and other events a large space was necessary, and the Russian House of Science and Culture in Berlin hospitably opened its doors to Polytechnic University. Invaluable support and assistance provided Rossotrudnichestvo (Federal Agency for CIS Affairs, Compatriots Living Abroad); Pavel SHEVTSOV, deputy head of the agency was extremely helpful with the event holding. The Polytech Days in Berlin got to be a grandiose event, which could not go unnoticed; among other factors, this was due to the university’s corporate style and logo used for developing the design of space and show booths, which occupied all halls on the 1st and 2nd floors. The image of Polytechnic University has become well-known and memorable. 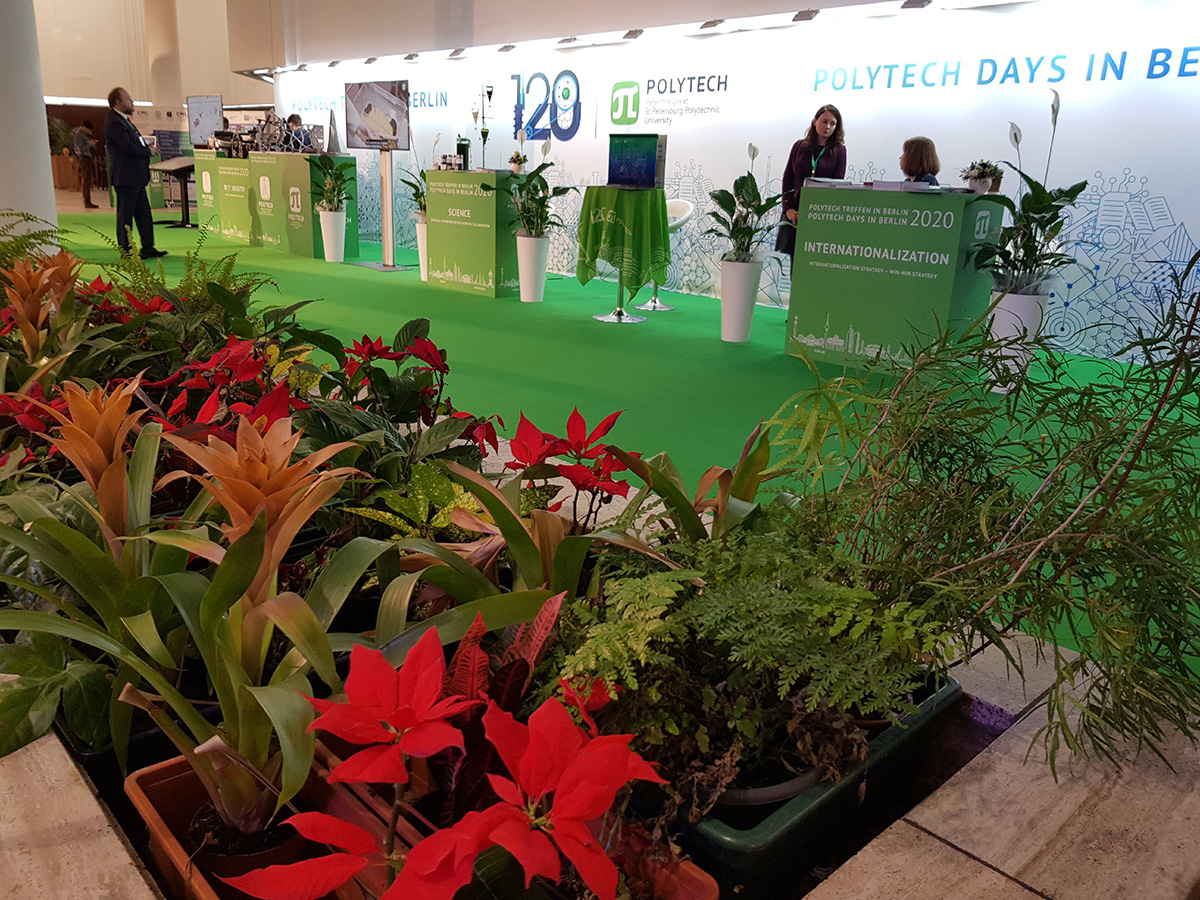 “The Polytech Days in Berlin were an exceptional event in many ways,” says Dmitry ARSENIEV, Vice-Rector for International Affairs at SPbPU.”No Russian university had an event of such format before. It was fundamentally different from others, different from the traditional forms of cooperation, visits of delegations to universities and bilateral negotiations. We offered the foreign partners an opportunity of multilateral meetings and multilateral dialogues among key ambassadors of science, education and business. Having presented successful practices of international cooperation, we were ready for a constructive discussion of various aspects of partnership and the search for mutually beneficial solutions. The result was dozens of productive negotiations and a huge number of opportunities for developing new and strengthening existing ties. And finally, the Polytech Days in Berlin proved to work as a well-tuned enterprise in terms of the organization. We are proud that the university’s services have grown up to the level that they can hold such grandiose events.” 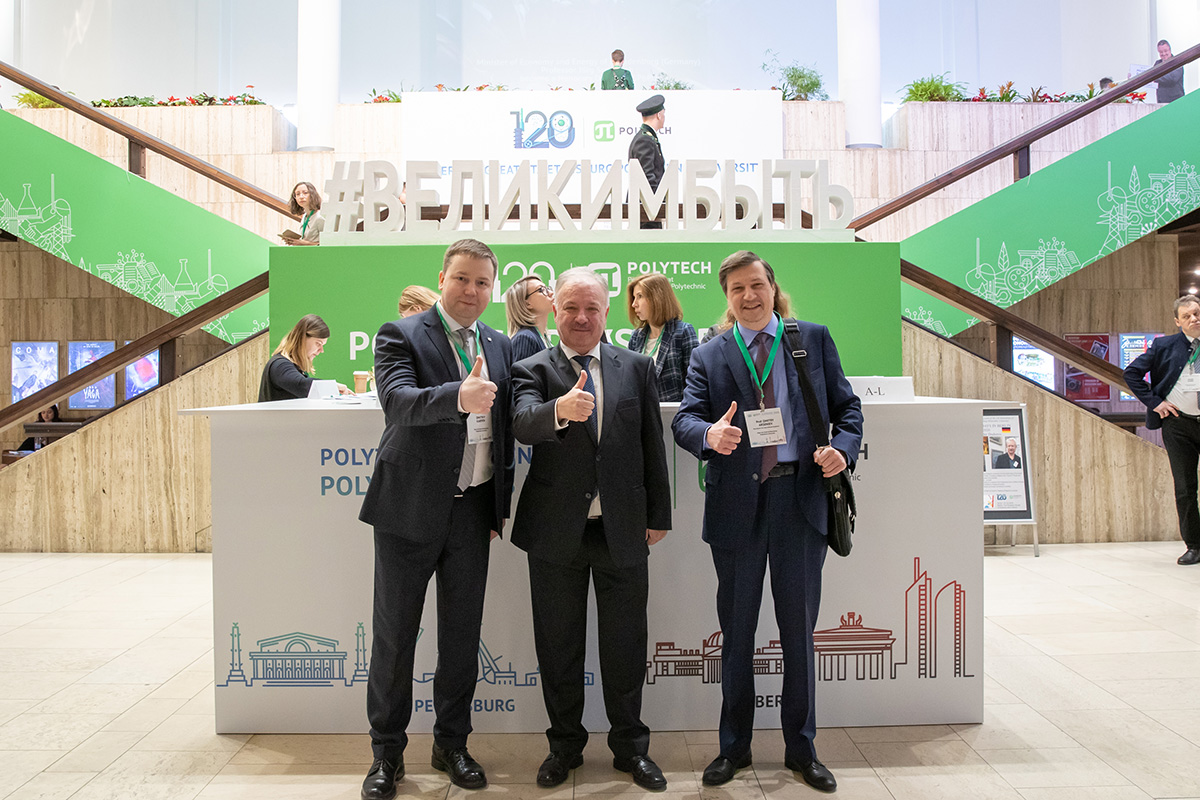 Germany was the originator of the Industry 4.0 concept, which the entire European community has accepted as the main vector of its development. The concept implies the introduction of the production of cyber-physical systems, additive technologies, and robotics. In Russia, these approaches to modern production are formulated in the framework of the Strategy of National Technology Initiative, one of the key players of which Polytechnic University has been from the very beginning. In a consortium with more than 60 high-tech companies, Polytechnic University has become the Russian leader in the development of original manufacturing technologies and designs for the largest high-tech enterprises. The competencies of SPbPU today provide for the creation of world-class equipment. 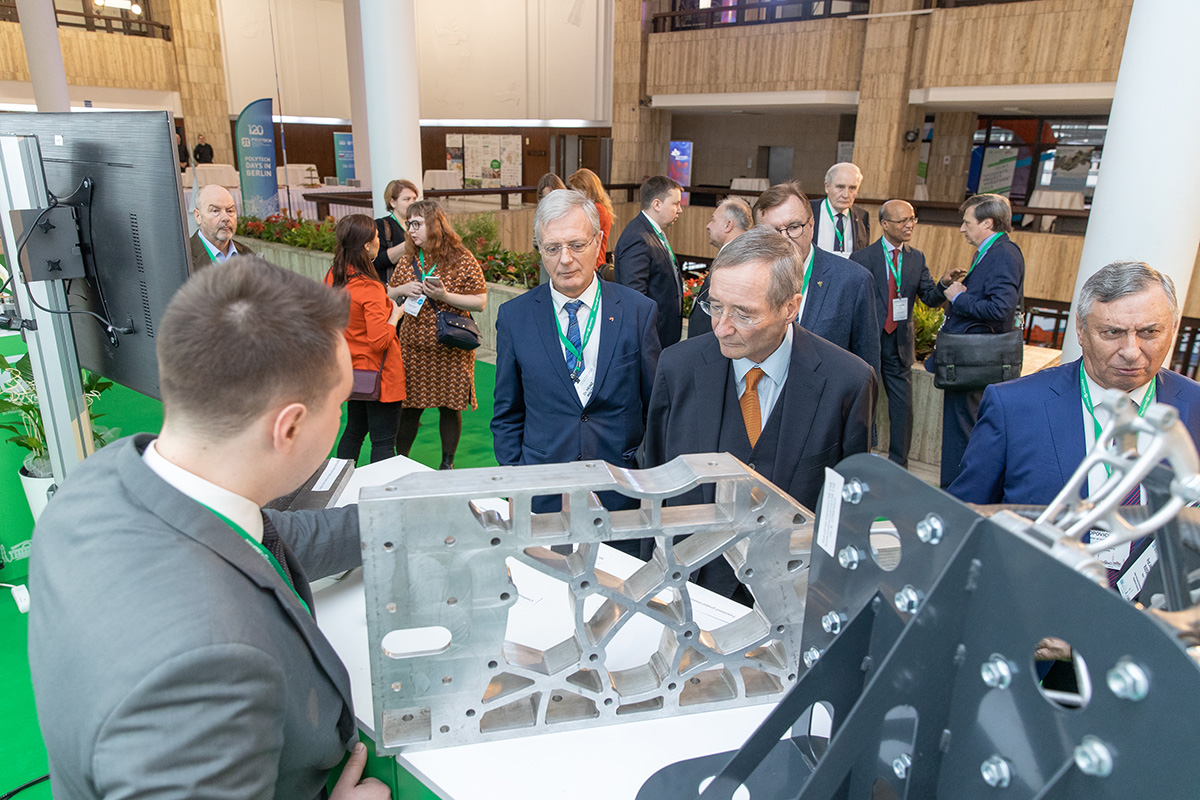 “Leibniz University Hanover and Peter the Great St. Petersburg Polytechnic University have long-standing partnerships,” confirmed Professor Volker EPPING, President of Leibniz University Hanover. “An exchange of students and post-graduate students is well-established between our universities. And of course, we have a strong scientific interaction through the exchange of teachers and researchers. We often work on joint projects. In my opinion, this is a real live interaction. We constantly communicate with our partners and friends from Polytechnic University; it is essential for us.” Mr. EPPING added that he was glad to take part in this event and demonstrate the results of cooperation. “It was a perfect idea to hold the Polytech Days in Berlin,” continues the rector of Leibniz University of Hanover. “This is a platform for the exchange of ideas between researchers, industries and universities, the opportunity to find new partners for further cooperation”. 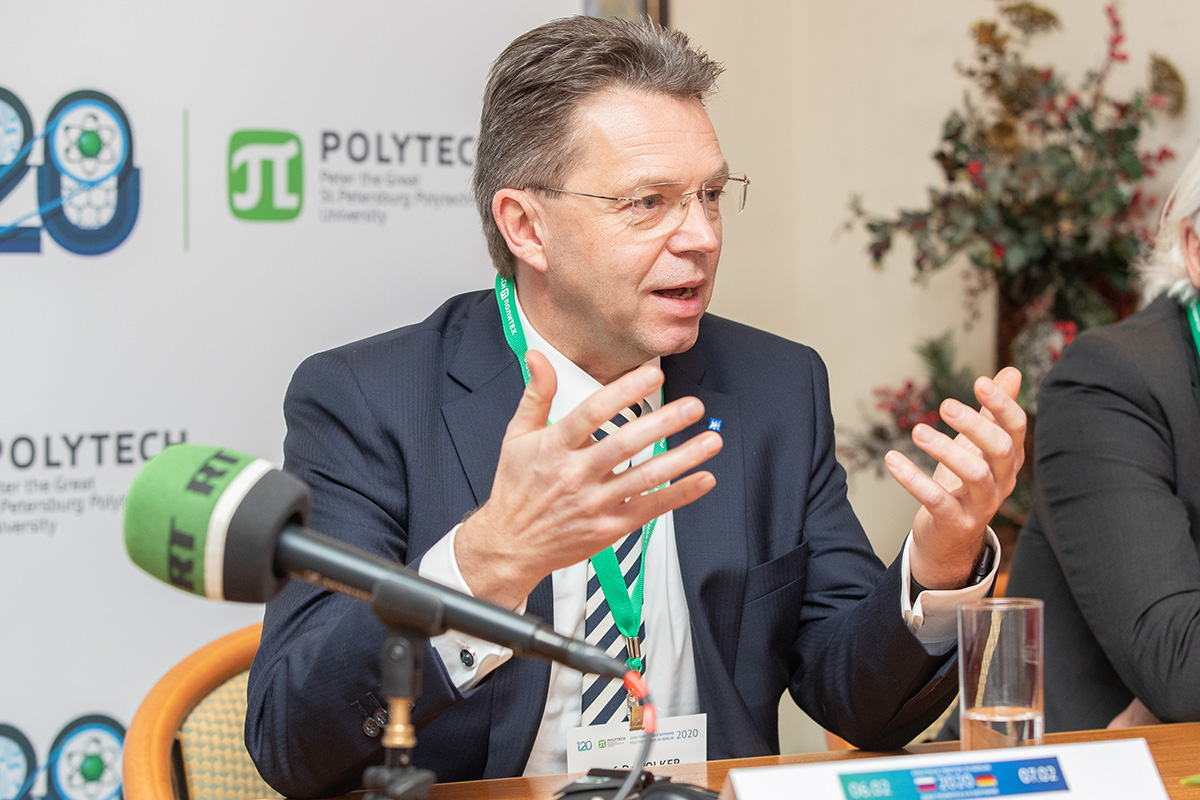 The forum was accompanied by a large exposition, which acquainted the participants with the history of the university, its famous graduates, and, of course, innovations created by scientists and students. An algae photo bioreactor, a 3D printer for creating human organs, and numerous other amazing scientific developments were shown at the Polytech Days. The guests could see presentations of best practices and get acquainted with the research results. It was good that besides the exhibits, booth attendants illustrated them with detailed explanations. 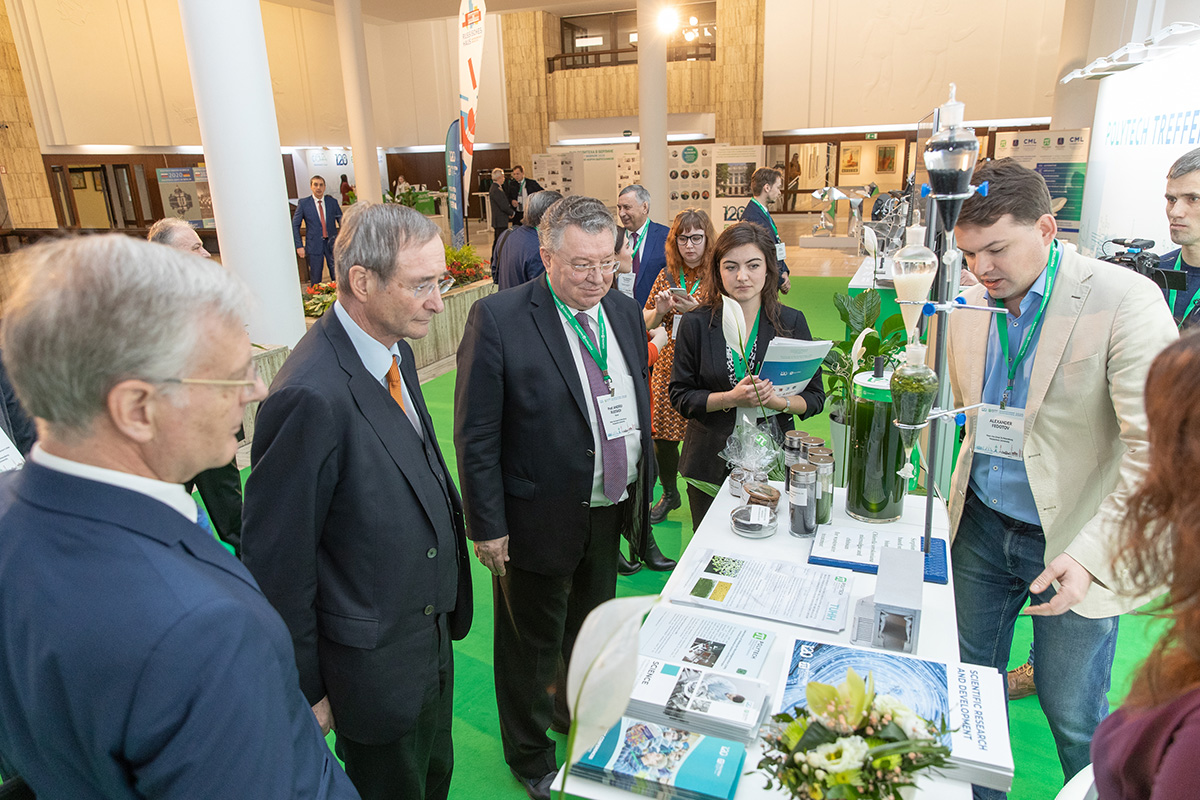 However, most of the guests’ attention was attracted by futuristic objects at the booth of the NTI SPbPU Center. The guests could see such developments as the rear longerons of the CML CAR body, in the manufacture of which various new industrialized technologies were used (aluminum cast parts, milled aluminum plates, etc.); a push-rod rear suspension CML CAR, a design lowering the center of gravity and providing for better stability of the car; a scaled model of the pilot project of the Engineering Center (CompMechLab ®) SPbPU, an electric CML CAR concept car, designed to demonstrate the level of competence of Russian engineers in the development and application of advanced production technologies. In the demo car, several significant user records are employed: by car weight, aerodynamics, chassis suspension design, and some other characteristics. 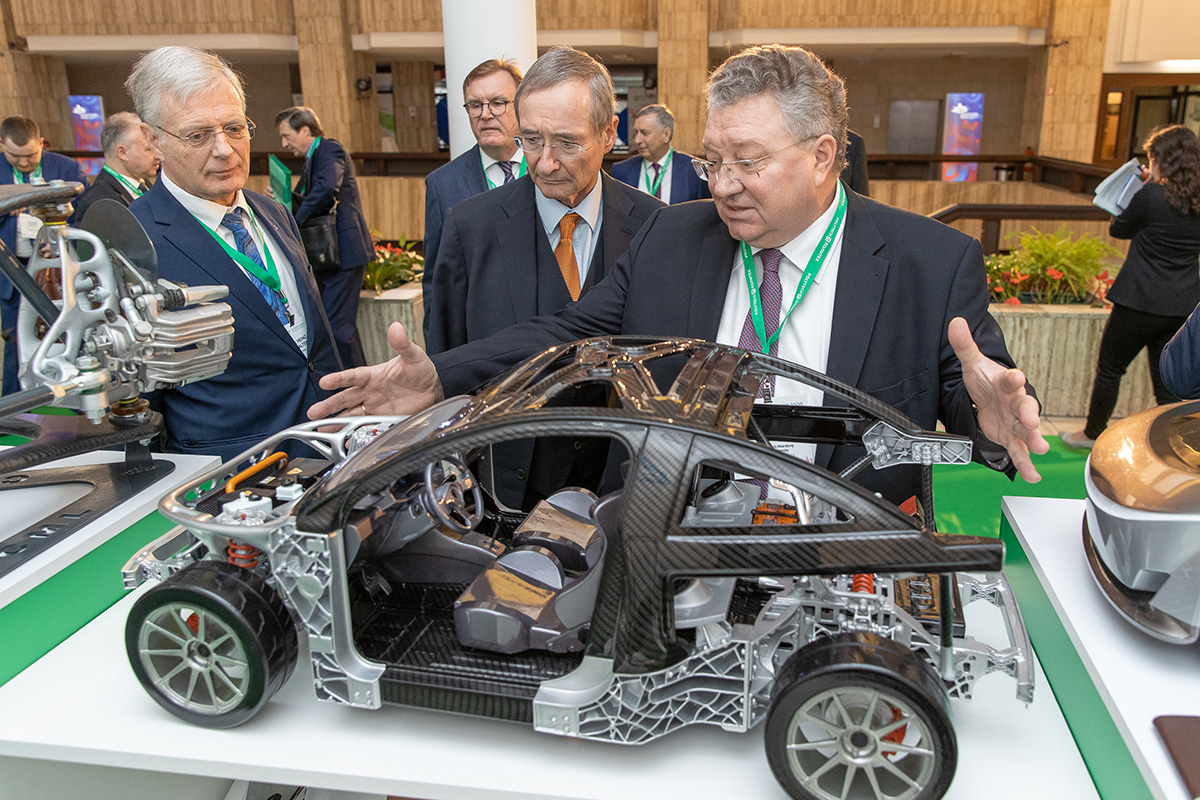 The presented exhibits--as well as the entire forum program--had the broadest possible range, and everyone could find something interesting. Someone was happy to try on professors’ mantles and take a picture; others were interested in the presentation of the book of “Songs of Polytechnic University” by Vitaly MAISEL, a graduate of our university, while some people were pleased to hear them performed by P.I.S.K., the “Polytechnic Historically Composed Team.” The soloist of the team Natalia GRUMAD said that she was a systems engineer by training, and a singer and artist by avocation. When she studied at Polytechnic University at the Faculty of Technical Cybernetics, she played in the Glagol Theater and met there the musicians of the P.I.S.K. group.

In 1996, Natalia and the group took part in the first All-Russian Contest of Pop Artists and won with the Autumn Foxtrot song, the music for which was written by Vadim MENDELSKIY. He also is a graduate of Polytechnic University; together with his wife Alla, he has been living in Germany for 28 years, and eight of those in Berlin. And of course, they could not help but come to the forum! “What could be better than to see your friends are among the spectators?! If only to have them dancing and singing with you, as before. One’s friends have no age, and no time difference between them. The time stopped when you met and became friends,” Natalia GRUMAD wrote these touching words after the forum on her page in the social network. 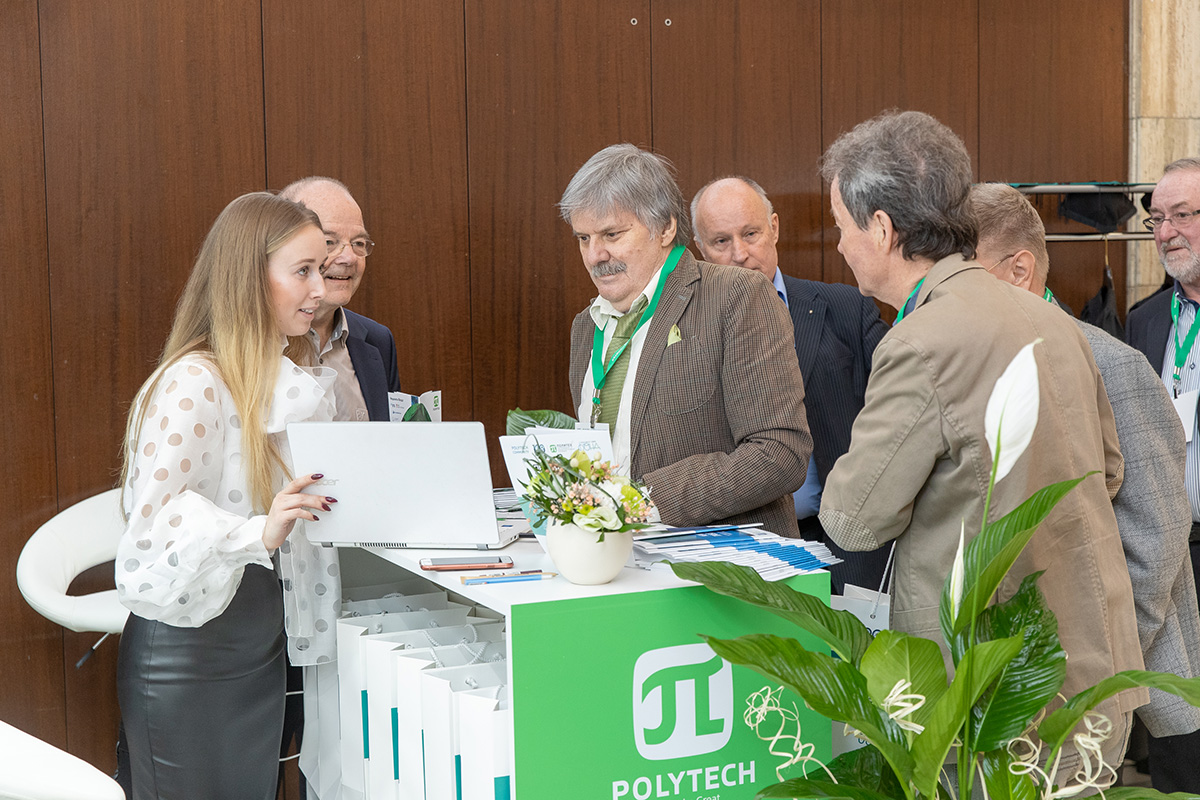 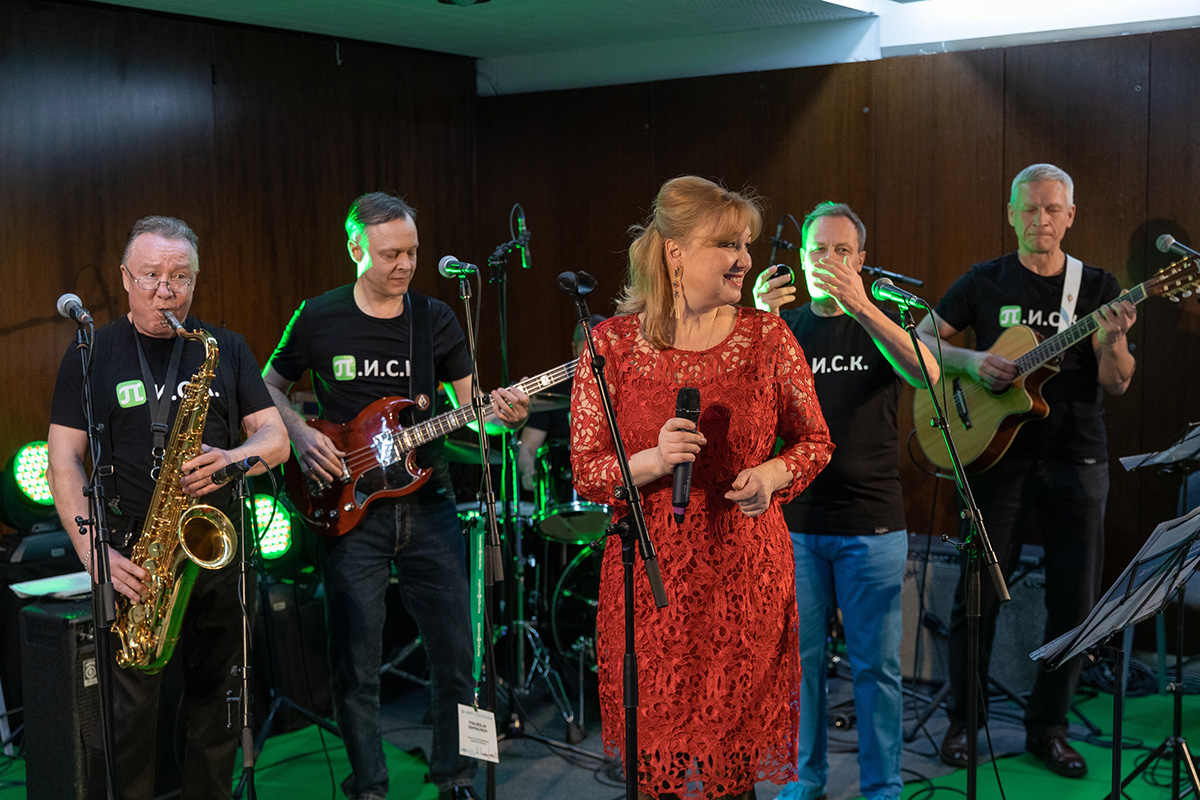 Some guests got interested in the historical exposition, while others stuck around the territory of #PolytechCommunity or the vernissage of Alexander DUDOROV, member of the Union of Artists of Russia and a Polytechnic University employee. Alexander DUDOROV brought to Berlin his works in various genres: landscapes, still lives, portraits, sketches of his favorite corners of St. Petersburg and abstract mystery paintings. Admirers of the artist’s talent were able to purchase their favorite paintings at the auction, and some paintings were donated to prominent guests of the forum in memory of Polytechnic University and this event. 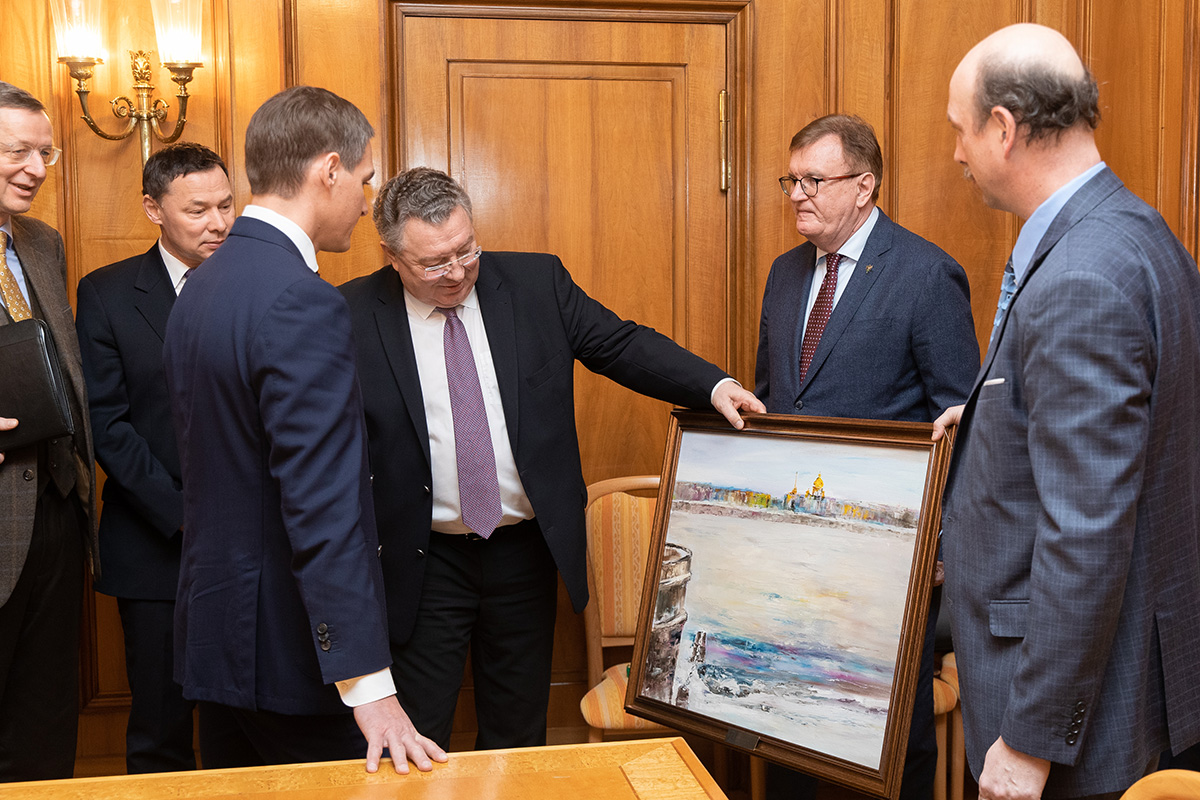 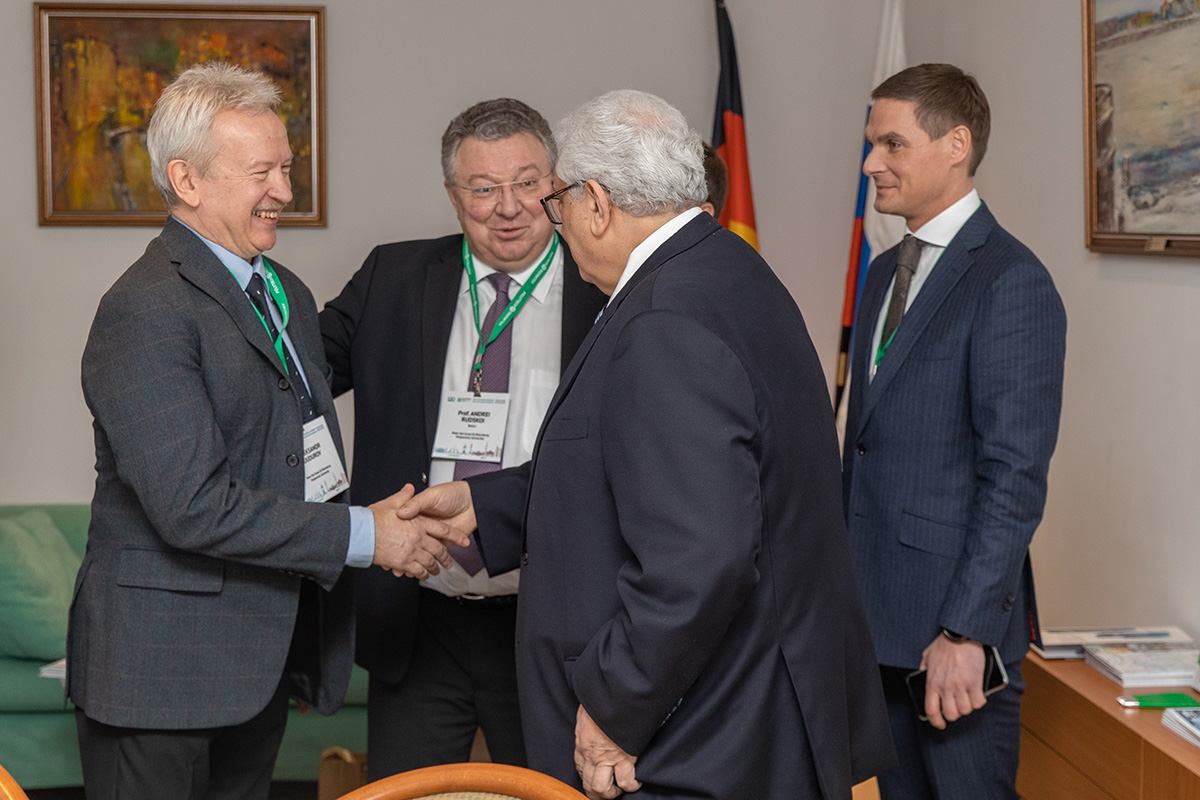 Ambassador Extraordinary and Plenipotentiary of the Russian Federation to Germany Sergey NECHAEV, during his meeting with SPbPU Rector Andrei RUDSKOI and President of the European Association of Chambers of Commerce Christoph LEITL, said that people could meet in any country but the main thing was to talk about the basic values--the values of the European community, and the dialogue should concern the economy, science and culture. “The scientific and technological field of cooperation is interesting to all countries,” the diplomat is sure. “At the moment, Russia has more than 900 scientific and educational centers that cooperate with Germany. A roadmap has been developed for scientific and educational areas and practical results are already quite visible, and members of the European community will be able to use these results. ” Mr. LEITL spoke about transcontinental cooperation. In his opinion, it is also important to develop cooperation in the field of economics and environmental protection; in Russia, there are many talented scientists and specialists, and our country can set the pace in this transcontinental cooperation. Andrei RUDSKOI proposed to have the next meeting in the framework of the St. Petersburg Economic Forum and in the framework of the “Sochi Dialogue” in Salzburg, counting on the possibility to discuss at those new cooperation results.

The material was prepared by the Public Relations Department of SPbPU. Text: Inna PLATOVA. Translated by SPbPU International Office